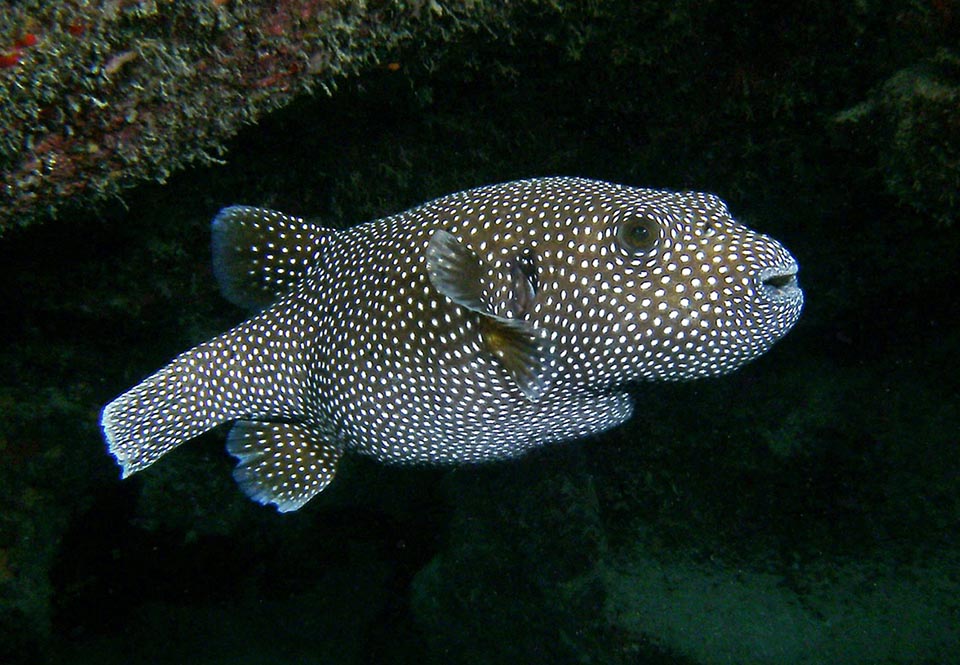 The name of the genus  Arothron, come from the Greek “a-”, privative, and “rothron” = nostril.

As a matter of fact in these animals the nasal tentacles do not show apparent openings, they are therefore “without nostrils”, even if they have perhaps olfactive functions. 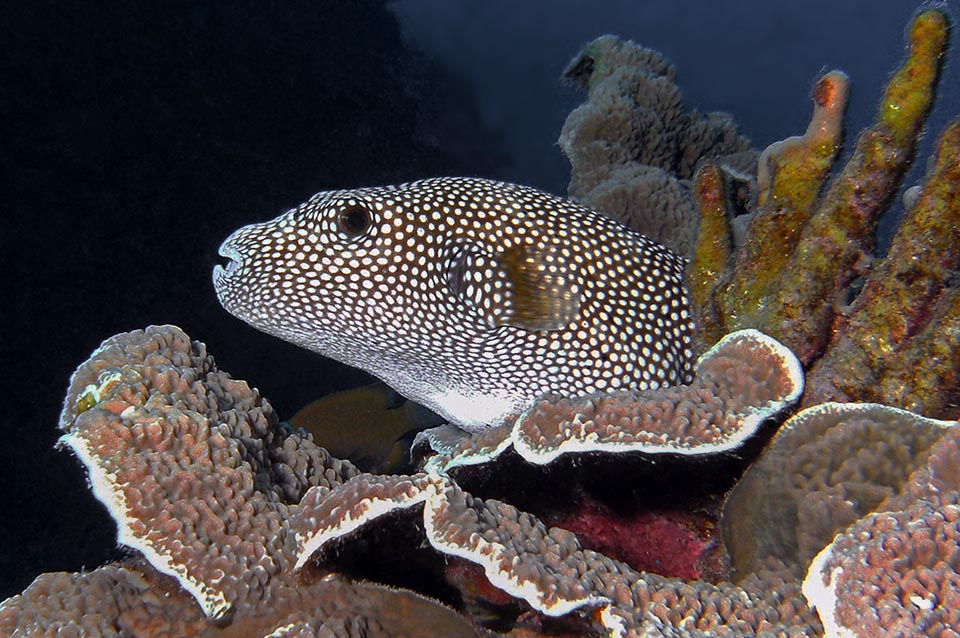 Similar in shape and size to Arothron hispidus, it is equally present in the tropical Indo Pacific, but is absent in the Red Sea and prefers the small islands and the atolls © Barry Fackler

The species comes from the Latin meleagris, the name which, after the opera by Pliny the Elder, the Romans were giving to the Guinea fowl, which was named, not surprisingly, by Linnaeus Numida meleagris. But what is the relation between a Guinea fowl and this fish? It’s simple. Because even if the Arothron meleagris can be completely yellow, the most diffused livery recovers the white spotted pattern of this bird.

Like the Arothron hispidus , to which it resembles a lot, the guineafowl puffer has a very vast, but more selective, distribution. 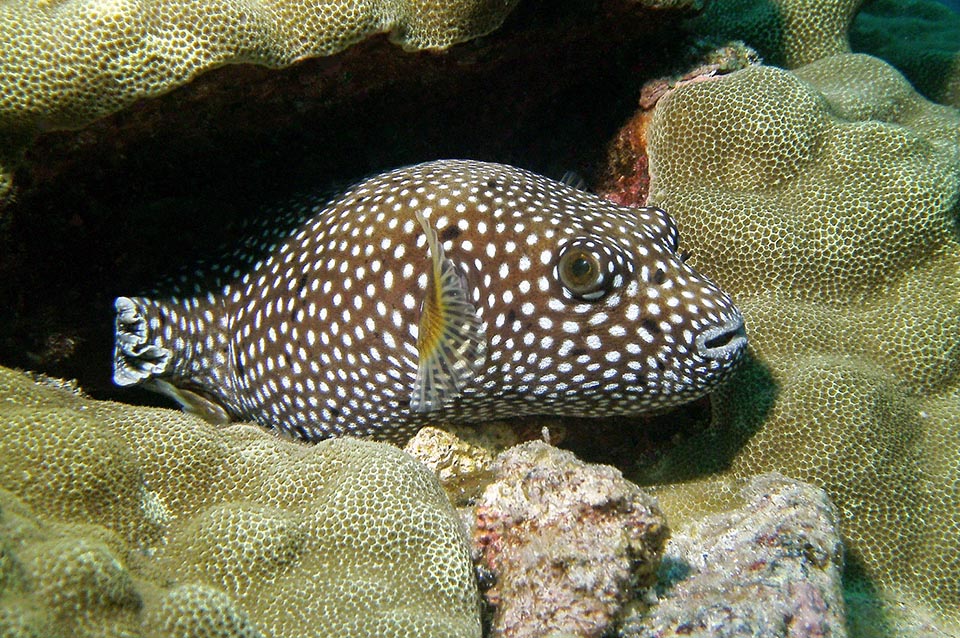 Also its diet is similar: crustaceans, mollusks, sponges, sea urchins and seaweeds, but with marked preference for the polyps of madrepores it crumbles without restraint © Barry Fackler

It is in fact present along the tropical coasts of the Indian and Pacific Oceans, with a preference for the small islands and the atolls, but is absent in the Red Sea.

It lives only in the clear waters of the madreporic formations, usually in the first 20 m, often on the projections, but never under the 70 m of depth. 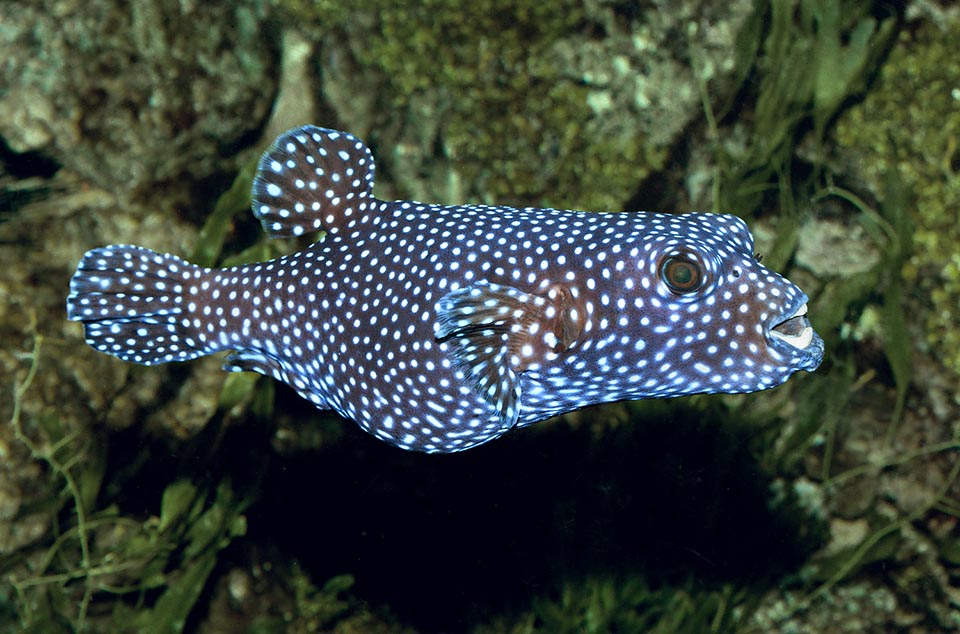 In fact, like all Tetraodontidae, it holds 4 teeth, two sturdy plates per jaw for crushing shells and carapaces or of extracting from their recesses the unwilling polyps © Giuseppe Mazza

Long at most 50 cm, it has an ovoidal body, which may swell of water or air when upset or in danger, assuming that characteristic spherical appearance which does not allow the predators to seize it and reminds them, if they have had previous experiences, that it is full of tetrodotoxin, a poison which blocks the breathing, 100 times stronger than the cyanide, mainly contained in the skin and in the inner organs. 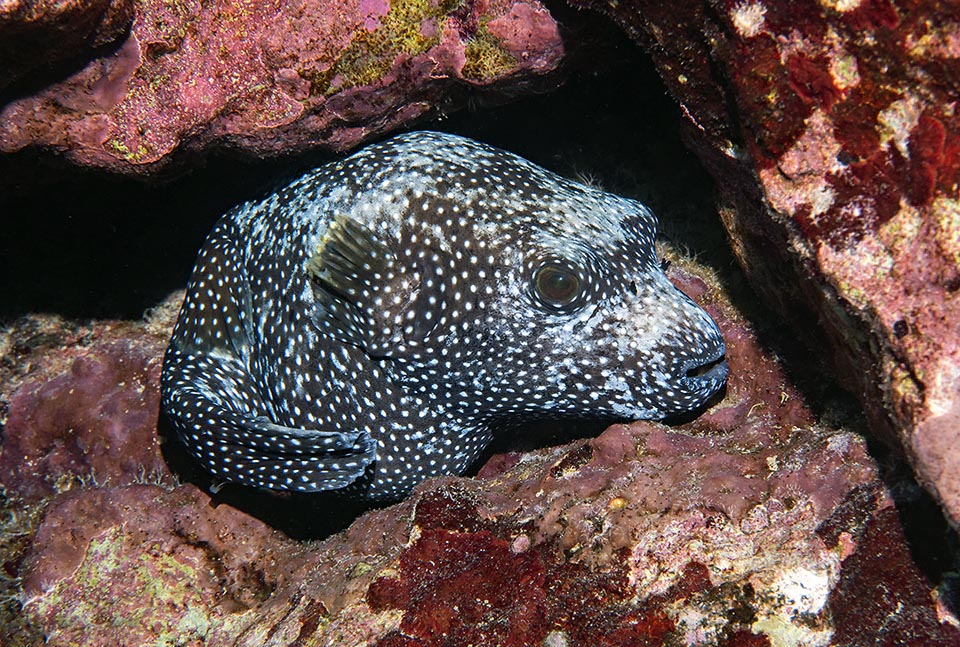 Relaxation time. Like all pufferfishes, Arothron meleagris can swell with air or water when it is upset or feels in danger to prevent bad guys from grabbing it © Brian Cole

They participate to the propulsion along with the ample spatulate caudal fin, moved by a robust peduncle, and the pectoral ones, fan-like, placed close to the gills openings. The ventral fins are absent. The mouth is small with four characteristic dental plates forming a robust beak for crushing the corals. The eyes, surrounded by a muscular ring, exceed the profile of the head.

The most diffused livery is the blackish brown, at times violaceous, one, with many small white dots present also on the fins, but about the 25% of the subjects is of a nice bright yellow with some black dot. 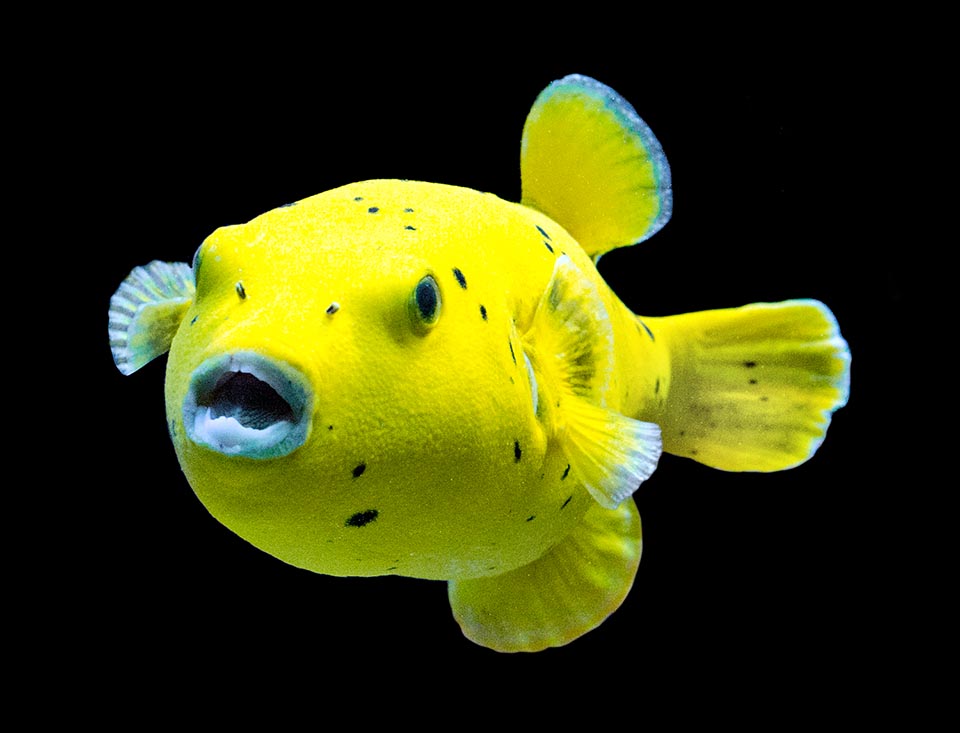 The elegant Guinea fowl livery is not a must, 25% of the Arothron meleagris have in fact chosen a bright yellow dress with black dots and classically designed zones © Giuseppe Mazza

In fact, it is not capable to fabricate its powerful secret weapon, the tetrodotoxin, but only to concentrate it, especially in the liver and in the ovaries, nourishing of the bacteria and of the seaweeds producing it. Its digestive system, indifferent to poison, does not destroy it and accumulates it methodically, day by day.

Little is known about the reproductive modalities and the larval developments. 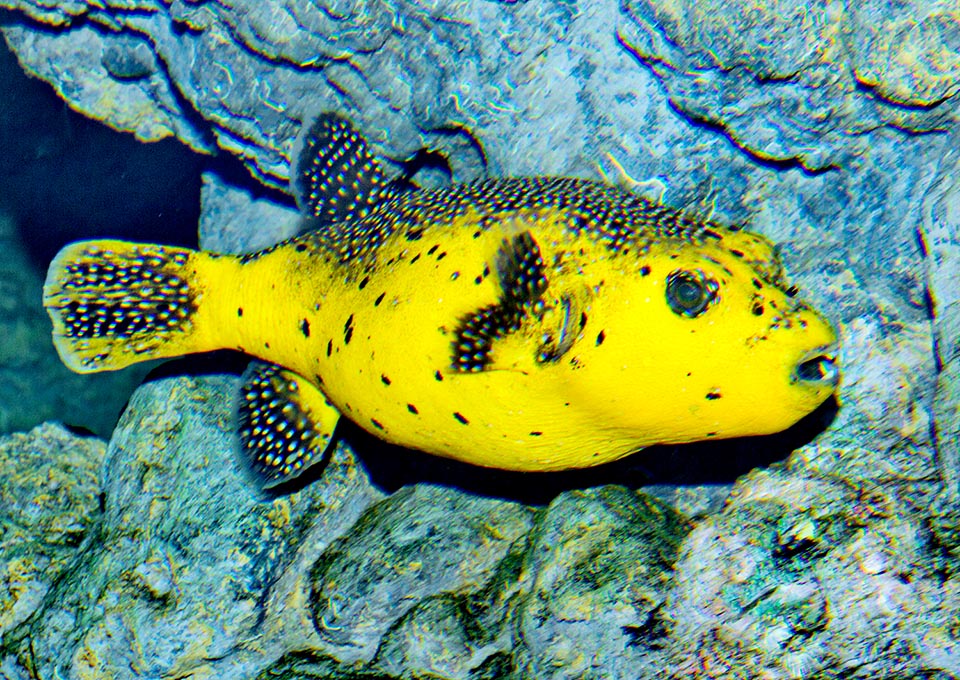 In any case the look is unmistakable: a warning uniform to wave in front of the nose of predators to remind them that the skin and the entrails are soaked with tetrodotoxin, a powerful poison, fatal also for man, that inhibits the respiration. The resilience is considered good and Arothron meleagris is not an endangered species © Giuseppe Mazza

In any case, even if some individuals end up in the home aquaria or in the dishes meant for the maniacs of fugu, it is not, by sure, an endangered species, due to great diffusion , the lack of natural foes and the fact the populations may double in only 1,4-4,4 years. The fishing vulnerability index of this species is of 40 over 100.