This African elapid (Elapidae) belongs to the genus Aspidelaps, which includes also the African coral snake (Aspidelaps lubricus), both endemic to southern Africa.

Its distribution includes the South Africa, in its northern part, whilst is absent south of Johannesburg; frequent in the zone of Musina, on the Limpopo River, and also in the south of the Zimbabwe. It is furthermore found in northern Namibia (Aspidelaps scutatus scutatus) and in a strip of Mozambique (Aspidelaps scutatus fulafula). The preferred habitat is in proximity of pools, rivers and swamps, where the batrachians are common and are preyed upon during the night. Its diet, however, includes also small mammals and lizards.

It’s an oviparous species. The female lays from 4 to 10 eggs, about 3 cm long, in summer, and the newborn measure, at the hatching, 15 cm. Cranky animal, if approached, it erects the fore part of the body, like a cobra, hisses angrily and does not hesitate in biting, so some populations call it iphimphi (cobra).

The venom, little studies, is produced in small quantities but is powerful, which is why, being a neurotoxic venom, it is to be considered as potentially lethal, even if most of the few cases of biting has had, as a consequence, not very serious symptoms. 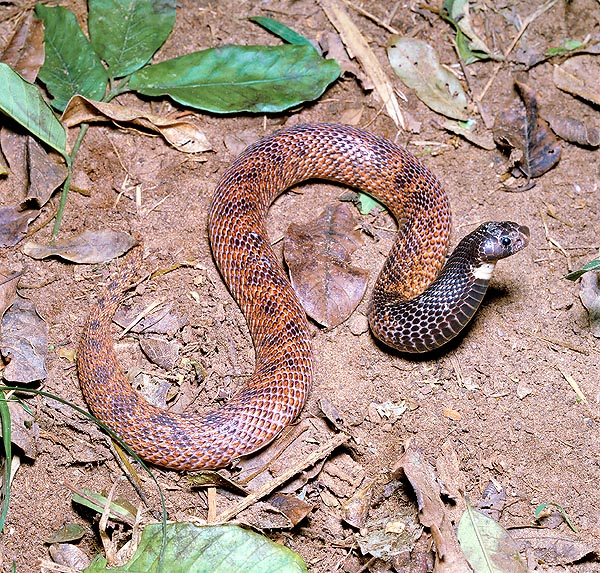 Small, edgy and venomous, the Aspidelaps scutelatus is a digging elap © Giuseppe Mazza

In particular, in two reported cases, there were no symptoms on the nervous system, but only swelling, oedema and pain, with recovery in a few days, whilst in other instances the local symptoms were absent, but a neurological symptomatology did prevail, with palpebral ptosis (drooping of the eyelids due to paralysis of the raising muscles), paresis of other cranial nerves (facial paresis), and generalized weakness due to its action on the striated muscles of various parts of the body.

No coagulation abnormalities were reported. A fatal case concerns, on the contrary, a 4 years old child, bitten, inter alia, by an “unripe” serpent. The child complained at once of hypersalivation and dyspnea, and went into coma after two hours. In spite of the assisted ventilation, he died 15 hours after the bite due to subsequent cardiac complications.

In the light of this, we may deduce that the venom is strong and dangerous and that the different symptoms and seriousness of the various cases may depend from several factors: possible dry-bite with scarce inoculation of venom, even marked differences between venom composition in the various subspecies or also inside the same species, but the fact stands that the modest size and the scarcity of serious cases, must not lead us to consider it too lightly. The polyvalent serum seems not to be effective in the treatment of the bite of Aspidelaps scutatus.

The most peculiar characteristic is the conformation of the muzzle which has, at the extremity, a prominent rostral scale, modified in shape, rightly, of a shield, or even better of a spade, which is useful for digging, as it is typically a fossorial reptilian. Another unusual particularity is the difference in the shape of the scales, which are smooth in the fore part of the body, but become strongly keeled on the tail, giving the animal an unusual look, smooth but with coarse tail.

Most of the specimens have an ash-grey coloured background, or pale brown, at times tending to the beige, other times to the salmon. It happened to me to sight, once, and individual which I would define as pink-pig. Often, the scales have a dark outline which gives the body a reticulated or spotted appearance.

In the adult, head and neck are black, whilst the young have often, by the neck level, one or two V-shaped drawings (those the Anglo-Saxons call rightly, chevron-like: similar to the drawing of a four-wheel car tyre).

The shield-nose spends the day in some gallery dug by rodents, in hole or under a stone, or under or inside a fallen and decaying trunk, but is capable to burrow its own tunnels, utilizing the strong muzzle and the rostral scale.

It may catch preys in the under ground tunnels, but it often gets out during the night, especially after a shower, seeking batrachians. It is not unusual to sight it, after heavy rains, in open air also during the day, especially if the sky is overcast but with mild temperature.