Those called bush vipers form a group of viperids with more or less evident arboreal habits, often covered by scales strongly keeled and imbricate and with liveries with bright colours, which tend to camouflage them between leaves and branches. The genus Atheris includes medium or medium-small sized vipers, not exceeding the 80 cm in the greatest species, with wide head and often with a triangular shape, big ayes with vertical pupil and, in many species, prehensile tail which helps their staying and moving on the trees. Usually the cephalic scales are small, whilst the body ones are, as I was saying before, strongly keeled, giving them a scabrous appearance.

This form of adaptation to the arboreal habitat, the colours and other generic particulars, suggest a resemblance (convergent evolution) with a group of Asian arboreal crotalids like the various Trimeresurus (arboreal pit vipers, as the crotalids are provided with thermal receptor pits) or like some South and Central American Bothrops, crotalids them too. However, not all the Atheris are arboreal: at least two species, Atheris hindii and Atheris superciliaris, have terrestrial habits, even if they climb often on low shrubs, thing which is done, anyway, also by purely terrestrial habits, such as Bitis arietans, Bitis nasicornis, Bitis cudalis, etc.

The last two species, Atheris hindii and Atheris superciliaris, on the other hand, have some characteristics which appear to distinguish them a lot from the genus Atheris, so that some herpetologists have proposed to place them in a separate new genus. Generally speaking, the bush vipers have cytotoxic venoms which cause pain, swelling and possibly necrosis, but they are not particularly strong and are not even administered in massive quantities, and only one species, Atheris squamiger, is known for having caused at least a human demise.

Another characteristic is the splitting of the geographic distribution, often limited to small islands in zones with thick vegetation or in clearly forest zones (for instance, Atheris hispidus, Atheris katangensis, etc.) whilst some species have an ampler distribution, like the Western bush viper (Atheris chorechis) present I the forest belt of the Gulf of Guinea.

The arboreal Great Lakes bush viper (Atheris nitschei nitschei) is a viperid with a squat and robust body, up to 75 cm long, with keeled scales which, by mid body, are placed in 23 to 33 oblique rows. 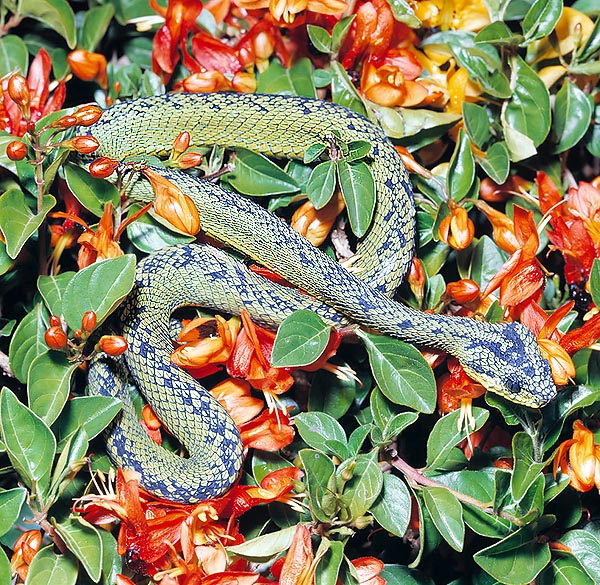 The tail, distinct from the body, is rather thin and quite long, prehensile and capable to grant a sure grip to the reptilian on the branches of the trees. The head is wide and compressed, triangular, covered by small cephalic scales, with big eyes with elliptic vertical pupil.

The colour of the body is green, with black or however very dark dots; often the skin between the scales is black, thus giving to the whole a fine, reticulate look, very elegant and camouflaging, which perfectly blends with the lights and shades of the perennial moving leaves.

The black spots on the body tend to create a zigzagged pattern, whilst on the head it is often evident a black arrowhead-shaped mark with apex pointing forward. The extremity of the tail is black, whilst the ventral part is yellow or pale green.

The immature individuals are rather uniformly brown or chocolate coloured, but the tip of the tail is canary yellow; however, after two/three months and after two or three moults, the colour changes in an astonishing way in a uniform bright green on which, only later, will appear the characteristic zigzagged black dots, typical of the adult. The dimensions of male and female are practically the same, with maximum peaks of 75 cm.

Two subspecies of this viper are known: the typical one (Atheris nitschei nitschei), present in Uganda, Burundi, Rwanda, Congo (Kivo and Shaba) and north-western Tanzania, and the Rungwe tree viper (Atheris nitschei rungweensis), more to the south, distributed in few and small islands in the southern and western parts of Tanzania, in north-western Zambia, and even more south, on the highland of Nyika, in northern Malawi. The differences between the two subspecies are not very prominent: the most southerly form has smaller cephalic scales and minor differences of colouration, often represented by yellow lines on the sides, in contrast with the black.

Among the arboreal vipers, known for being irascible, this serpent has a more placid temperament (which does not imply that it is not ready to bite if it is disturbed) and adapts to the captivity life more than the other species. During the day it is usually resting or basking twisted on same branch or, often, on the elephant grass stems, two or three metres off the ground, but, by night time, it gets to the soil hunting small preys (rodents, batrachians). The tail may be used as bait for attracting the prey within range of the lightning bite, and in such case it is moved as an earthworm or a caterpillar would move.

It seems that it’s mainly the immature individuals which utilize this ruse and perhaps this might explain the bright colour of the tail, which contrasts with the uniform brown of the body of the young specimens. The choice habitat is formed, even more than by trees and bushes, by high grasses (elephant grass, bamboo papyrus, etc.) in swampy zones or close to the marshes, and up to the 3.000 metres of altitude (bamboo forests). The subspecies rungwensis seems to prefer forest zones.
Usual preys are mice and other small rodents, lizards, chameleons and batrachians.

The births take place in summer and the newborns are from 15 to 18 cm long. The venom is little studied, but looks to be cytotoxic, haemotoxic and not too strong. I have not found any case study of bites to the man and it doesn’t seem to me that serious cases of poisoning have ever been reported. The polyvalent serums do not look effective and in any case I think they would not even be advisable, seen the seemingly low dangerousness and, as it happens for the bite of other species, a symptomatic therapy of support should be sufficient, besides an anti-tetanus immunization. A possible lack of clotting might, however, require a transfusion therapy.