The huge Rhinoceros viper (Bitis nasicornis Shaw, 1792) is with the Gaboon viper, one of the most beautiful serpents, for what colouration and livery are concerned, of the African continent.

Inhabitant of the rainforest, this viper is present in the forests bordering the Gulf of Guinea, from Liberia, through Ghana and Togo, up to the basin of the Congo River. It goes to the east up to the region of the great lakes, Uganda, Rwanda, Burundi, and western Kenya. It goes down to the south up to the northernmost part of Angola. There are then some isolated enclaves where it has been reported: the Usambara, in Tanzania, the Imatong Mountains, in Sudan and in the Bioko Island.

It is a big and robust viper, with a body somewhat squat and with a good diameter, covered by keeled scales. The keel of these scales is so much pronounced that some herpetologists got injured by them and have suffered from cuts on the fingers simply because of the friction of such scales. The scales are placed in rows from 30 to 45 by mid body.

The head is wide and triangular, flattened, with rather small eyes and placed much forward, green or gold iris and vertical pupil, and the neck is rather thin. At the apex of the muzzle two or three pairs of rostral scales form a pronounced outgrowth that has earned it the name. The dimensions are similar to those of the puff adder, as an average, from 70 to 100 cm, but specimens of 120 cm have been reported.

The livery is wonderful and camouflages the animal very well in its forest habitat: along the back there is a chain of oblong dots, blue or violet, each one with the centre bordered of yellow. There are then other, rhomboidal dots. On the sides, stands out a series of triangular crimson or rust-red drawings, bordered of blue or green. The head, on the upper side, has a dark, arrow-shaped, drawing, turned forward, which stands out on a pale background. 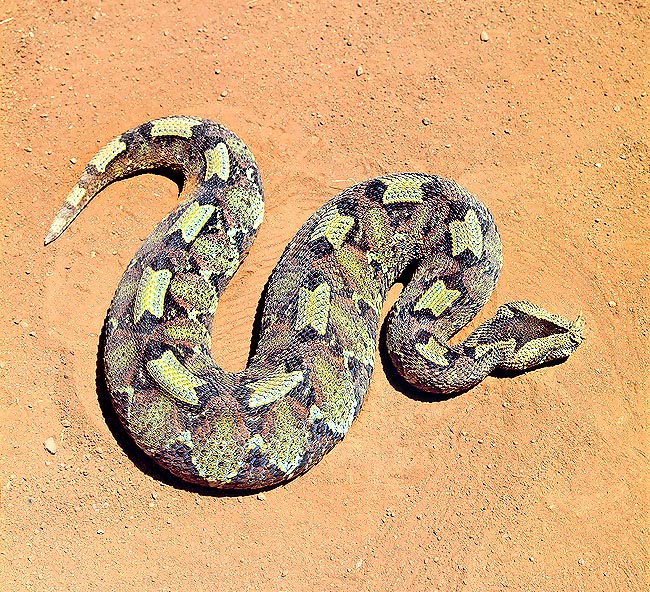 Even if being an animal normally living and hunting on the ground, it climbs willingly on branches and shrubs, up to 3 or 4 metres of height, for basking in the sun or for getting away from an excessive humidity of the soil.

Its displacements are usually slow and ponderous; often, if not menaced, it proceeds on a straight line, with contractions of the ventral muscles, leaving a rectilinear track (caterpillar-like locomotion), however, if menaced, it will wind with lateral undulations, trying to find a shelter.

When in water, it swims more gracefully than when moving on the soil and doesn’t hesitate to cross streams and bodies of water. In fact, this serpent loves also the swampy areas and it is not unusual to find it immersed in water, so much that one common nickname is “river jack” and, among its preys, stand also amphibians and even fishes. Despite of its scarce displacing speed, however, its bite is like a lightning, and it may strike also by side, with extreme precision.

Mainly nocturnal animal, it hunts at the ambush, staying motionless and relying on its perfect camouflage, till when an unaware rodent or other prey does not pass close within range of its instantaneous lengthening. Once the prey is hit, the reptilian usually lets it go, unless it is not a small animal, then follows its smelly track till when finds the lifeless prey, dead because of its powerful venom. This technique minimizes the risk of being injured by teeth, nails, or claws of the attacked animal.

Births take place regularly in March or April, when the female “delivers” from 6 to 40 young, measuring about 20 cm of length.

The rhinoceros viper is usually little aggressive and reluctant to bite, so much that in some zones, like the Nandi (Kenya) are it is not only tolerated by the natives in their villages, but appreciated for the quantity of mice it eats and for its poor aggressiveness. When an intruder approaches, usually it warns with a hiss which is the most noisy and powerful among the African serpents, much more than that of the puff adder and the Gaboon viper, and this renders less likely to walk on it and to be bitten or to slam into it when it’s rolled up on a branch.

If, however, you insist in annoying it, touching or walking over, it will not hesitate in biting and the even 3 cm long fangs may deeply inject a cytotoxic venom slightly less powerful than that of Bitis gabonica and of Bitis arietans  but in any case administered in remarkable quantity (up to 200 mg). The venom causes necrosis, cankers and remarkable oedemas, often accompanied by haemorrhages and thrombotic phenomena. The cases of bite are, in any case, rare.