Aubrieta is a taxonomically difficult genus belonging to the family Brassicaceae, tribe Arabideae, that includes about 20 species spread mainly in Anatolia, Greece and Balkan Peninsula. Most of them are perennial mountain or (sub)alpine  plants growing on  rocks and screes, in the woods or on open slopes.

Aubrieta is the close relative of Arabis from which it separated about 2-7 million years ago. The centre of origin of Aubrieta is quite probably Turkey that represents the primitive centre. During the Pleistocene the various taxa expanded independently towards Asia Minor, to the south up to Lebanon and to west up to Greece and the Balkans with an adaptation to milder temperatures and less dry conditions due to the climatic fluctuations (interglaciations and glaciations) of the last millions of years. Unlike many other species belonging to the family Brassicaceae, the processes of speciation of the genus Aubrieta did not determine genesis of polyploids, as its species are usually diploids with chromosome number 2n=2x=16. 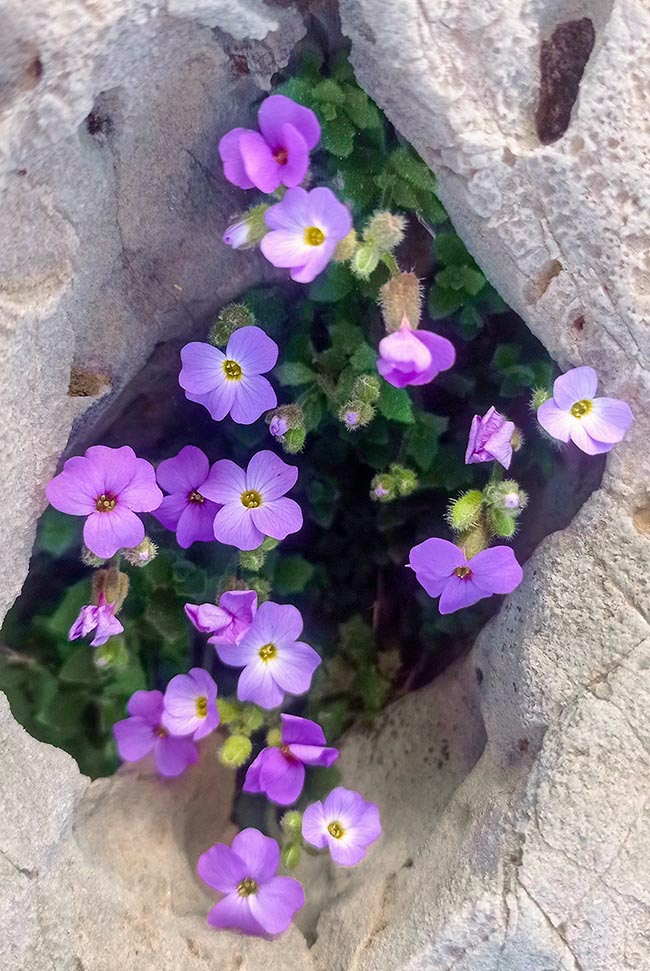 Native to south-eastern Europe and temperate Asia, Aubrieta deltoidea grows among the rocks to 1770 m of altitude © Giorgos Palimetakis

It is native to south-eastern Europe and temperate Asia (western Anatolia), but it is cultivated all over the world as an ornamental plant. In some areas it has become spontaneous because it escaped the cultivation.

Naturalized plants have been found in Belgium, in France, in Italy, in the USA and elsewhere.

In Sicily, spontaneously, on the calcareous rocks of the Madonie and in Rocca Novara on the Peloritani, at 1400-1700 m of altitude, is reported Aubrieta deltoidea subsp. sicula (Strobl) Phitos, but recent cariological (2n=14) and molecular studies have evidenced its affinity with Aubrieta columnae Guss., therefore the Sicilian populations of this rare endemism are ascribed to this species with the rank of subspecies and precisely Aubrieta columnae subsp. sicula (Strobl) M.A. Koch, D.A. Tedesco & R. Karl.

The name of the genus Aubrieta is dedicated to Claude Aubriet (1665-1742), Parisian court drawer who accompanied, from 1700 to 1702, Joseph Pitton de Tournefort (1656-1708) and the German physician and botanist Andreas von Gundelsheimer (1668-1715) in their expedition in Greece and inTurkey in order to realize drawings of the plants and of the visited sites. In fact, in Tournefort’s opus « Éléments de botanique ou Méthode pour connaître les plantes » are present 435 drawings made by him.

The specific epithet deltoidea comes from the Greek letter “Δ”, delta and from “eidos”, appearance, because of the triangular shape of its leaves.

Aubrieta deltoidea has stems, thorny only at the base, creping and with persisting dead leaves.

The leaves, on short petiole, are alternate, entire, scarcely toothed on the sides (4×10-12 mm) of grey colour, tomentose for the stellate hairs. This pubescence allows the plant to tolerate the low temperatures, up to -23 °C.

The flowers are grouped in simple terminal racemose inflorescences. The petals are 4 arranged in a cross, entire or slightly smarginate, 12-28 mm long, of pink, red, violet, rarely white, colour. The sepals are 4, sacciform  at the base (6-11 mm). The stamens have winged filaments and the ovary is superior.

The blooming, usually, begins in April and May and extends up to early July. The pollination is entomophilic and the insects are attracted by the luminous petals and by the pleasant smell produced by the nectars at the base of the filaments of the stamens. 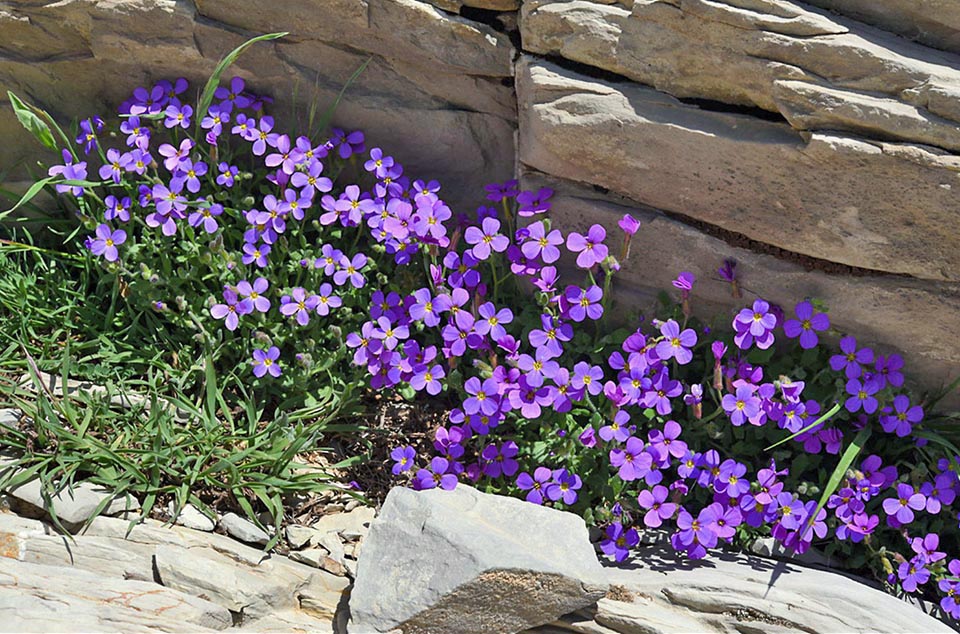 Naturalized plants, escaped from gardens where is grown as ornamental, are now frequent also in Belgium, France, Italy, USA and other countries © Ori Fragman-Sapi

The seeds, 10-15 per loculus, compressed and of brownish colour with a several months period of physiological dormancy. If wet, they release mucilages. This is an adaptation of the plant to arid environmental factors, that has established during its evolutionary processes, consequently, the seeds depending if dried or humid, may be spread by anemochory, zoochory and also by anthropochory (dispersal done by humans).

Aubrieta deltoidea is an ornamental plant, rich in numerous cultivars and hybrids, that is mainly cultivated in parks and alpine gardens. It was introduced in the USA by the beginning of the XVIII century and slowly has spread widely. Its rusticity, due to its xeromorphic characters that make it resistant to drought and to frost, has determined the conditions for naturalizing spontaneously thanks also to its high reproductive capacity due its numerous seeds.

Plants that escaped cultivation have been found in Belgium in 1966, before on the roadsides and later, in 2008, on old walls. Natural populations are reported also in France, in Italy, in the USA, in Ukraine and in other regions of East Europe. 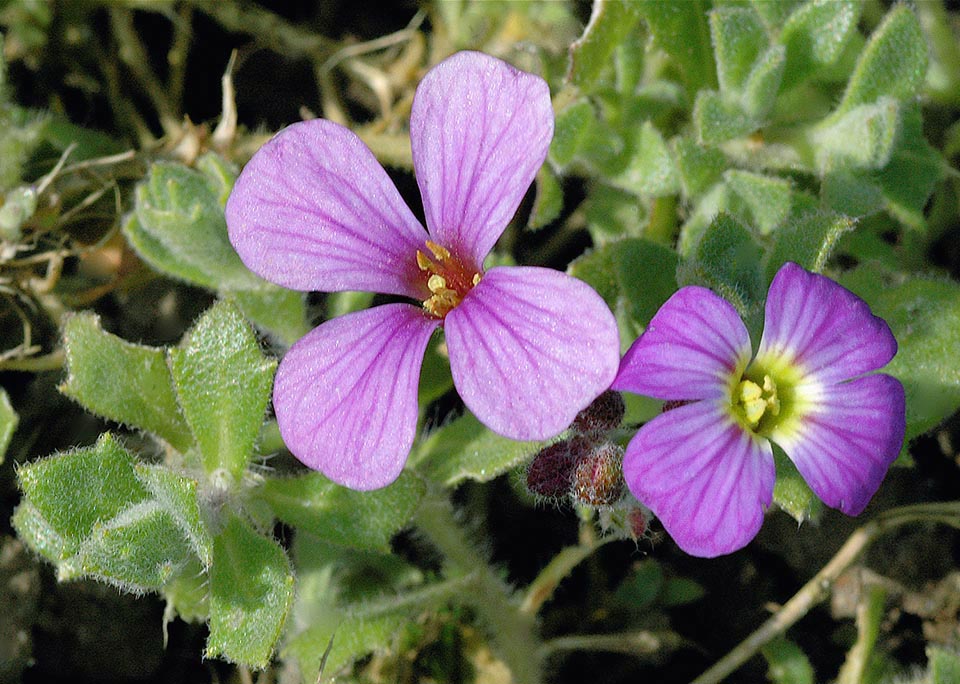 The leaves evoke the letter delta of old Greek, hence the specific term deltoidea. Covered by stellate hairs, protect the plant from the low temperatures up to -23 °C © Robert Combes

Aubrieta deltoidea does not fear the cold and its cultivation is fairly simple. It loves loose and light soils, especially well drained, and even stony, but must be avoided those subjects to marine breezes. In summer it is good practice to add every 20-30 days to the irrigation water, a liquid fertilizer for flower plants.

Reproduction can be done by seed in February-March, by cutting in August-September or by division of the tufts in autumn and in spring. It is usually a pest resistant but sometimes can be attacked by aphids, snails and by the fungi such as Albugo candida (Pers.) Kuntze that causes powdery whitish pustules on the leaves and on the stems. If the water stagnates in the ground, can develop fungi of the radical rot that cause the plant to deteriorate quickly.

Most of the cultivated plants are hybrids known as Aubrieta x cultorum Hort. but, at times, generically commercialized as A. deltoidea. The cross of A. deltoidea with the cognate Aubrieta columnae Guss. has originated plants with large and semidouble flowers. 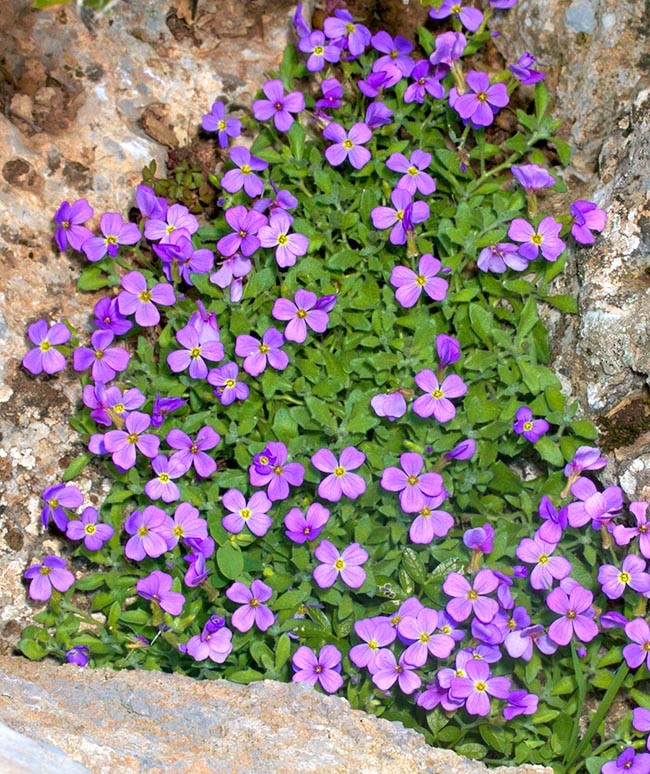 Alpine beauty on the Kosmas reliefs in Peloponnese. But Aubrieta deltoidea is also a quite promising medicinal plant due to the high antioxidant activity and the considerable content of phenolic compounds © Adrien Chateignier

The many cultivars of Aubretia fundamentally differ for the colour of the flowers and for the different employments in cultivation. No less than seven cultivars have obtained by the Royal Horticultural Society the merit award (Award of Garden Merit). They are:

A. deltoidea ‘Argenteovariegata’ is a perennial plant with leaves having white margins and pink-mauve coloured flowers in spring.

A. deltoidea ‘Bressingham Pink’ is very ornamental because of its great semidouble flowers of bright pink colour.

A. deltoidea ‘Red Cascade’ is a plant with small lilac red flowers that by covering all the plant create very decorative cushions often utilized for embellishing stone walls.

A. deltoidea ‘Greencourt Purple’, similar to the previous, but with violet flowers.

A. deltoidea ‘Doctor Mules’ is a perennial plant up to 10 cm tall, forming mats of small green leaves that in spring cover of violaceous blue flowers.

A. deltoidea ‘Royal Series’ includes compact perennial plants, semi-evergreen or evergreen, with small leaves, ovate to oblong, hairy, toothed at times, of grey-green colour. From April to June form flowers arranged in racemes, having lively colours violet to blue, or pink to red.

Many other cultivars are diffused among which we cite:

A. deltoidea ‘Rokey’s Purple’, quite spread in the gardens and displaying bright violet flowers.

A. deltoidea ‘Doctor Mules Variegated’, perennial plant, evergreen, forming small mats of bicoloured leaves, grey-green with white-cream edges, and violet flowers. It may bloom again in autumn. It is employed in the rocky gardens, to cover walls, and even for borders. Care is to be done to the completely green buds that it is better to remove in order to avoid their superiority on the variegated ones.

A. deltoidea ‘Snowdrift’ is a rustic ground cover plant that, in April and in May, covers with tiny white flowers. It adapts to grow also in the poor grounds or on the dry stone walls where it manages to form cushions that spread slowly during the years.

A. deltoidea ‘Gloria’, has pink flowers and small ovate-oblong leaves, entire, little tomentose, of pale green colour. It is suitable for the rocky gardens. 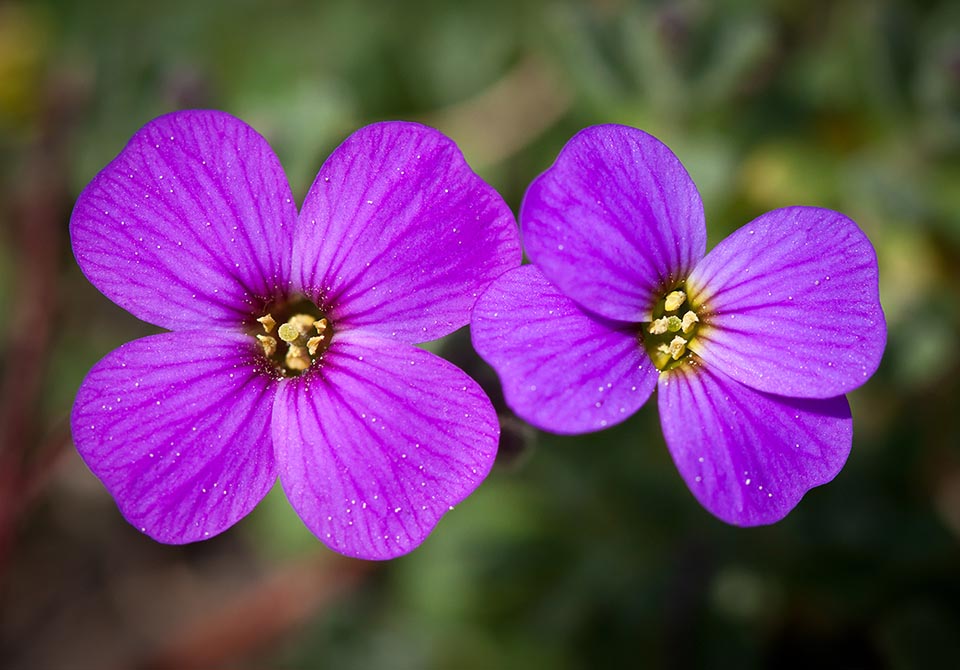 Most of cultivated plants are hybrids known as Aubroieta x cultorum. Seven have obtained by the Royal Horticultural Society the merit award of gardening © Tom Bech

A. deltoidea ‘Hendersonii’ is a creeping plant, 10-15 cm tall, with green-grey leaves and very numerous mauve or violet coloured flowers that persist for several months. This variety has been dedicated to the American botanist Louis Forniquet Henderson (1853-1942).

A. deltoidea ‘Leichtlinii’ has, in a sunny environment, a cushion-like posture that, for several months, is covered by a rich blooming of intense carmin colour. It reaches a height of about 10-15 cm, and widens up to about 45 cm.

A. deltoidea ‘Purple Cascade’ has small purple flowers that cover, in spring , all the plant. It loves sunny sites, well drained, and has the shape of a very decorative cushion, but also falling on the low walls and flower boxes.

Aubrieta deltoidea is also quite a promising medicinal plant for human health. As a matter of fact, recent studies have evidenced its high antioxidant activity and its relevant contents of phenolic compounds.