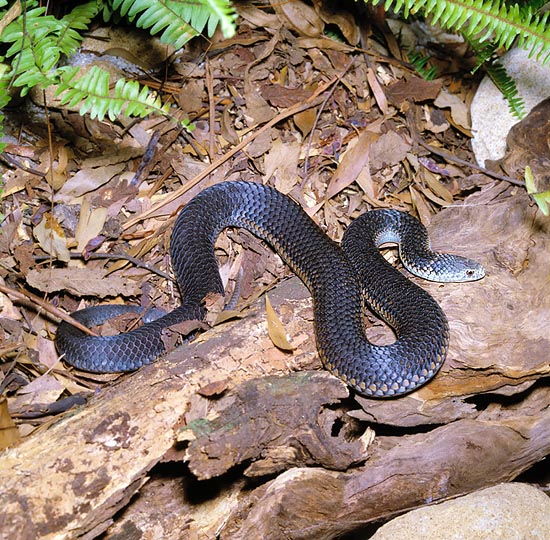 The common name “copperhead” may originate some confusion in those who are not familiar with the herpetology, as well as other common names describing a generic characteristic of a reptilian or of another animal.

So, if the name of the famous “coral snakes” is amply justified by their bright colours, and the best known American copperhead (Agkistrodon contortrix) has a livery much coppery, the same cannot be said for the Australian copperhead (Austrelaps superbus) Günther, 1858, belonging to the family of the (Elapidae).

In the American copperhead the typical colouration is practically always visible, whilst the Australian copperhead is more sober, and some specimens, especially in the area of southern Queensland, are totally black, at times without even a hint of reddish colour on their head.

The colouration is much variable, at times depending on the zones, passing, as we have said, from the black (Queensland and New South Wales) to the copper or brick-reddish, to the grey or the brown.

Some individuals have a dark band on the back, placed longitudinally, others do have one or two dark transversal bands, more or less evident, in the nuchal region. Often, the lateral scales are less dark than the dorsal ones and the ventral part is always paler, cream, grey or yellowish. The labial scales are often “barred” in a quite evident way.

The head of these elapids is clearly discernable from the neck, the snout is short and blunt, the eye, with a round pupil, is big and the body is robust and long, as an average, about one metre, however, some specimens reach the 180 cm, whilst those of Kangaroo Island and of the Adelaide hills are smaller (60-80 cm).

The geographic distribution is not much ample and includes zones of southern-eastern Australia (southern Queensland, New South Wales, hills of Adelaide, Victoria, Kangaroo Island, Tasmania and the Bass Strait Islands).

The subdivision in subspecies seems to be supported by the different temperatures and degrees of humidity characterizing the various habitats, but we have to consider that the same species may adapt to quite different environments. The pygmy variety seems to prefer more rainy zones (rainfalls of 600-800 mm per year) and fairly constant temperatures, between the 23 and 25 degrees, whilst the subspecies of the highland and of the lowland live in zones with lesser rainfall and with greater temperature oscillations.

In any case, a characteristic of the copperhead is the good tolerance towards rather low temperatures, which seem to be, even, preferred to then high ones, so much that this is the serpent which is the first to appear and to be active by the beginning of spring and the last to disappear by late autumn.

As it happens with our Vipera aspis, it is not rare to see it in open spaces, also in full winter, busy in absorbing heat from a stone or on a road, if the sun just raises a little the temperature, and is also the only Australian elapid which can be found over the snowline.

When the temperatures are cool the copperheads are diurnal, but tend to assume crepuscular or nocturnal habits when it’s warm. The swampy areas and their surroundings are the most appreciated, but also the banks of water courses and surfaces offer an ideal habitat, and the batrachians are one of their choice preys. However, also other preys, among which small mammals, birds and reptilians (including smaller individuals of its own species) become regular part of their diet. Excellent swimmers, these reptilians often venture in the water, for crossing a river or a pond as well as for hunting tadpoles and, at times, some fishes.

Other typical characteristic of the Austrelaps is the tendency to gather and to reach remarkable concentrations, close to the particularly rich sources of food as well as in places offering the best climatic conditions: the preferred places are grassy areas, possibly with tall and thick grasses, heaps of stones of stone walls, piles of twigs, piles of firewood, roots of plants with eroded soil, crevices in the rocks.

The reproductive period begins in spring and the young come to life in summer. Ovoviviparous reptilian, the female “delivers” up to 20 young (more frequently, 14), which measure, upon their birth, from 16 to 18 cm and which are already equipped with a perfectly working venom apparatus and capable to inoculate dangerous amounts of venom. 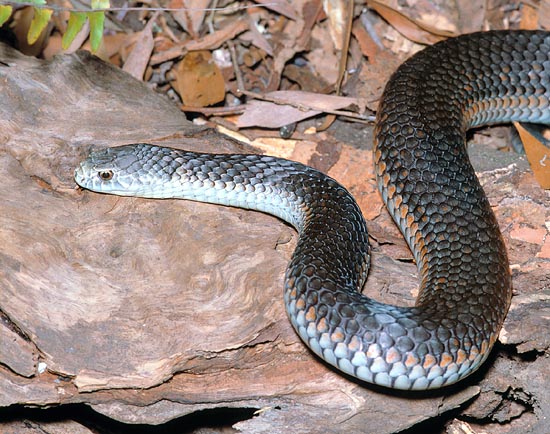 Next to cobras, it is a mild Elapid with short venom fangs © Giuseppe Mazza

The temper of these snakes tends

to be quiet and, if disturbed, they prefer to glide away without showing any sign of aggressiveness.

For such reason, they are not considered as particularly harmful reptilians, even if a possible bite may easily reveal deadly.

Being elapids, they are proteroglyphous, that is, equipped of fixed venom fangs and placed in the fore part of the palate and the elapids, usually, at the same size, have shorter fangs than the viperids which, being solenoglyphous, can fold them on the palate, however, some elapids have 5-8 mm fangs, therefore highly effective and capable to pass through clothes (common taipan, mamba, etc.).

On the contrary, the copperhead has the poison teeth fairly short (about 3 mm), but this does not mean, however, that they are not effective weapons, but a good pair of robust trousers, thick socks or other clothing may represent a valid barrier in the ill case of a bite, more than in a meeting with other species.

Taking advantage of this classification, where the copperhead, in spite of a powerful poison, is placed rather low, I would like to pinpoint one thing I have noticed while talking with many fans of serpents: the ill known Inland taipan, or fierce snake (Oxyuranus microlepidotus for some systematicians and Parademansia microlepidota for others), is often, wrongly, considered as the most dangerous serpent in the world, as provided with the most powerful venom (49,5 times that of the Naja naja, the Indian cobra), but, in reality, its true dangerousness is rather low, and in fact I do not have record of fatal cases which may attributed to him.

This fact depends from several characteristics of such so feared reptilian: it is a non aggressive and very shy species which goes promptly away and is fairly reluctant to bite, the occasions of a meeting man-serpent are uncommon, seen the habitat and the habits of the fierce snake, and, finally, the fangs have a so much inferior length than those of a common taipan. Its score, surprisingly little over that of our copperhead, might have been even lower if its poison should no be fifty times more powerful.

For what concerns the Austrelaps superbus, on the contrary, its venom has a power (for what the effects on a man are concerned) quite similar to that of the Indian cobra, that is, much lower than that of many other Australian species, but however more than sufficient for killing: it is its shy and calm temper to explain its position in the “tail” of the list of the public dangers.

Despite the relative docility, the copperhead, if obliged, assume a menacing position, flattens the neck and the body in order to appear bigger and more ominous and, if the intruder insists, may bite with lighting speed. The threatening position, with flattening and widening of the body is a common characteristic in the tiger snakes, but we have to point out that such “attitude” is taken also for increasing the body surface and absorb more heat from a surface like a flat rock or a road, which slowly transfer the heat stored during the sunny hours.

Its venom, as it happens for many Australian species, is complex and with a series of different effects on the organism. The neurotoxicity, which may cause the demise due to paralysis of the respiratory muscles and following asphyxia, is due to a most likely pre-synaptic toxin which, therefore, hinders the release of the neurotransmitters, whilst the postsynaptic toxins of other species hinder the above neurotransmitters to connect to the receptors of the endplate, with an analogous outcome.

But the paralysing action on the nervous system is not the only cause of death in case of full-bite with poisoning. The venom has also a haemorrhaging and cytotoxic action. A phospholipase A2 seems to be the cause of the relevant haemorrhagic syndrome, by means of the inhibition of the platelet aggregation, and a phospholipase B causes haemolysis (rupturing of the red blood cells). Furthermore, there is also present a certain cytotoxic action, which may cause necrosis, even if less important than those due to the venoms of some viperids.

To finish with a flourish, it seems that there is present also a myotoxin which may cause myolisis (destruction of the muscular fibres) with consequent muscle pain, dark urines due to micro-globinuria (appearance of myoglobin, a protein of the muscles) and possible renal failure.

The serum which results to be effective for treating the poisonings caused by Austrelaps is the one utilized for the tiger snake, usually in an initial dosage of 3000 units (like for the Common tiger snake, or Notechis scutatus), whilst the initial dosage, in case of bite of the enormous Chappell Island tiger snake (Notechis ater serventyi) is 12000 units.