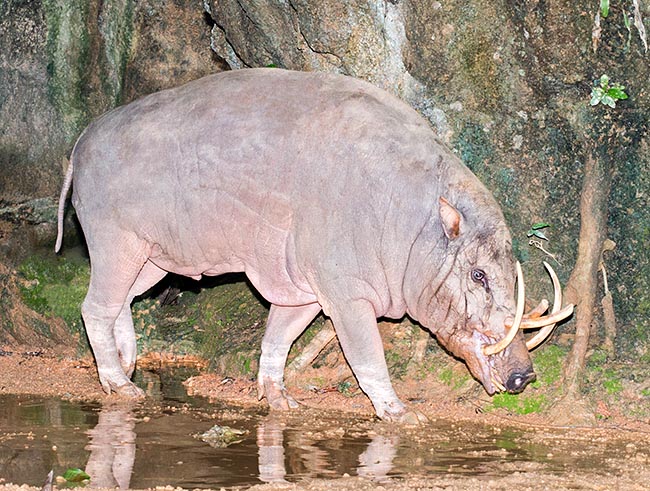 The insular isolation, of some of the Sunda Islands where it lives, has rendered different the various populations, so much to recognize 4 subspecies: Babyrousa babyrussa celebensis is the biggest subspecies and is endemic to Celebes Island (northern Sulawesi); Babyrousa babyrussa frosti is, on the contrary, the smallest subspecies and is endemic to the islands Sanana and Taliabu (Sula Archipelago).

Until a few years ago, all the subspecies were considered as a unique monotypic species; after some authors some of the present recognized subspecies must be considered as species themselves and after others the subspecies should be grouped in a different manner. The name of the genus and of the species comes from the local Malaysian name under which the animal is called “babi-rusa”, meaning “pig-deer or pork-deer” due to the fact of being a suid endowed with very prominent and wrinkled teeth, which, in some way, recall the antlers of the deers.

The buru babirusa occupies a very restricted range limited to some Indonesian islands: Sulawesi Island and some adjacent islands. It is still present on Buru and Togia. It is extinct on other nearby islands where once the species was present.

It lives in the thicket of the pluvial tropical forest, riparian reeds, humid and swampy habitats, banks of rivers and ponds rich of aquatic vegetation. 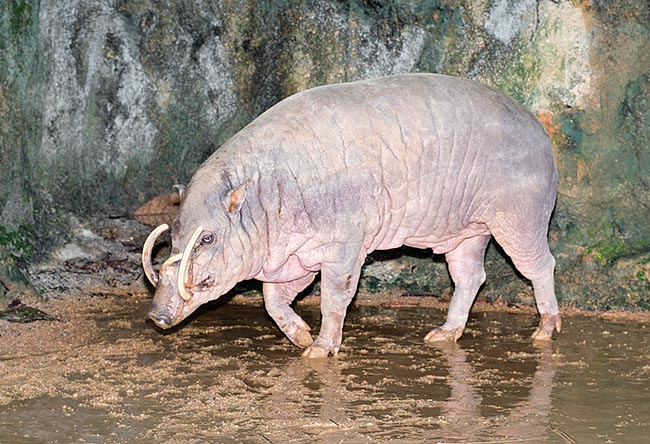 Amongst the suids, the buru babirusa is the species most at ease in the water: it is capable to swim easily and can cross rivers and even sea stretches (between an island and another).

The buru babirusa is an archaic suid with an odd look. Its shape differs from that of the other members of the family: it has very developed hindquarters, the back is arcuate and the legs are rather long and thin. It has a roundish body with an elongated pointed muzzle.

Its height at the withers is of about 60-80 cm; the length head-trunk is of about 90-110 cm and has a weight of about 60-100 kg. The tail, not longer than 20 cm, has no terminal bush. The skin, of grey-brownish colour and of rough and wrinkled look, is covered by greyish down, so much sparse that the animal seems almost glabrous (Babyrousa babyrussa celebensis).

The bolabatuensis (indicated also as nominal subspecies Babyrousa babyrussa babyrussa) has more abundant, long down, of golden-white colour (known under the term of golden babirusa). The subspecies togeanensis has always abundant and long hair but darker fawn-brown colour.

The distinguishing feature of the species, which has conferred the name to this wild pig, is given by the very particular development of the canines in the males. Whilst those of the jaw are directly turned upwards and can then generally curve backwards, those of the lower jaw pierce even the bones of the skull (palatal vault), developing opposed and after a growth of some tens of centimetres, in the most mature males bend backwards and turn down (from the muzzle towards the front) so to form some showy curly semicircles.

These overdeveloped fangs may even be more than 30 cm long and are a mark of imposing presence in the mature males. The females have no canines or much reduced and slightly inferior size than the males. 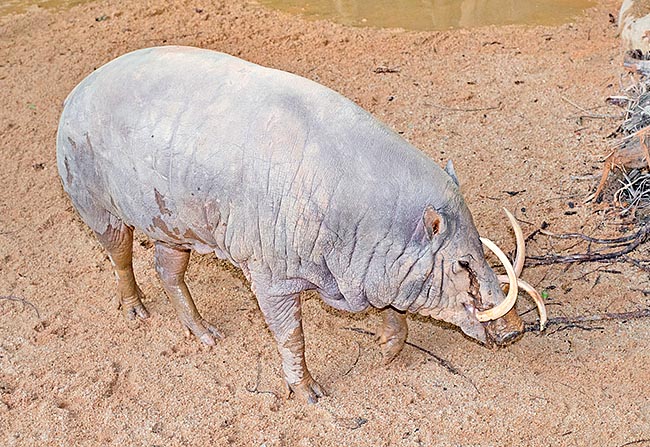 It's an endangered archaic species, with few thousand members, due to hunting and habitat changes © G. Mazza

This species has crepuscular-diurnal habits (mainly active on the morning); the buru babirusas are agile animals and capable of moving deftly in the tangled vegetation. The buru babirusa nourishes of vegetables of various type, such as fruits, buds, foliage, grasses, roots, bulbs, rhizomes.

It eats also fungi, insects, invertebrates and small vertebrates, proving to be practically omnivorous but with a less varied alimentation than other species of pigs.

They have mandible and maxilla sufficiently strong for crushing nuts. In the wild, the buru babirusas have been observed while licking volcanic salts and ingesting soil; with their snout they explore only very soft sandy and silty surfaces. In fact, because not having a typical rostral bone present in other suids, they do not practice the handling-weeding-digging of the soil, looking for food, as typically done by the pigs in general. They love, like the other suids, the mud baths. The cries emitted by the buru babirusas are similar to those emitted by other suids: grunts and squeals, when upset, beating of teeth and of tusks.

The species is not very prolific: usually are delivered one or two (quite rarely three) newborns after an about 5 months (125-160 days) gestation. The newborns, upon their birth, are about 20 cm long, weigh about 300-1000 g, and have the same colouring as the adult animal being not provided of the camouflaging striped mantle typical of many wild suids. The female has only two-four productive tits for the breastfeeding and is much protective of its offspring.

The young are nursed for 6-8 months. The sexual maturity is reached when about one year old. The buru babirusas live in small groups formed usually by 2-5 (up to about ten) individuals generally formed by some adult females with juveniles. Around the pools of water and muddy puddles may muster even groups with greater number of individuals. The most mature or oldest males are often solitary. 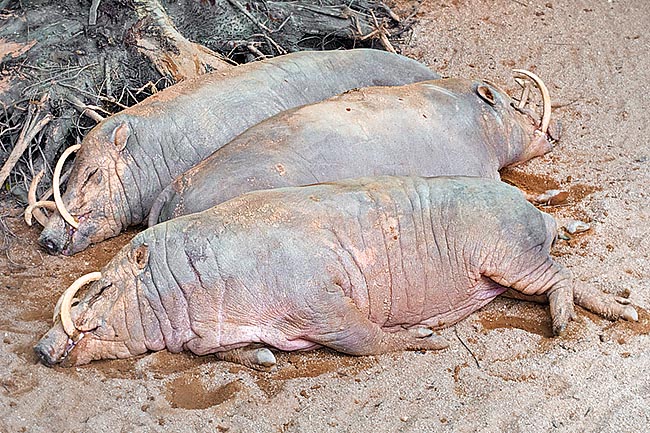 Babirusas have diurnal crepuscular habits, but do sleep during the warmest day hours © Giuseppe Mazza

The tusks of the males, secondary sexual characters, are defence organs and can be dangerous only in the case of jerkings and blows in the tenderest parts. As the buru babirusas dont have epidermic shields, defensive thickenings or manes which may buffer the attacks, the aggressive fights between competitors do take place frontally. The males confront trying to lift off the ground the opponents. This is witnessed by the great number of specimens with broken or blunt tips held by most of the adult population.

The buru babirusa can generally live 12-20 years. Seen its limited geographic distribution, the buru babirusa is considered as a vulnerable species. This suid has suffered and suffers from the loss of natural habitat (deforestations and agricultural conversions) and from the hunting, due to its delicious meat done by the local not Muslim communities. The buru babirusa is hunted also for the particular trophy given by the tusks.

Natural predators of the buru babirusas, especially of the young ones, can be the crocodiles and some big snakes. The whole population appears to be of very few thousands of specimens. Even though the species is included into the appendix I of the CITES since tens of years and even though they have created some specific protected areas (natural reserves), the situation of the buru babirusas is in any case alarming. In captivity, in the whole world, a certain number of specimens are bred in zoological structures. However, the animals bred in the zoos suffer from a high rate of consanguinity. The bred babirusas, furthermore, probably also due to the absence of selective pressures done by the natural habitat have a physical conformation differing from the typical one, sleek and slender, of the wild animals. The funny look of the head of the male babirusas has fed legends like that sustaining that these animals hang from the trees with the tusks for resting and has inspired the creation of demonic masks done by local artists.