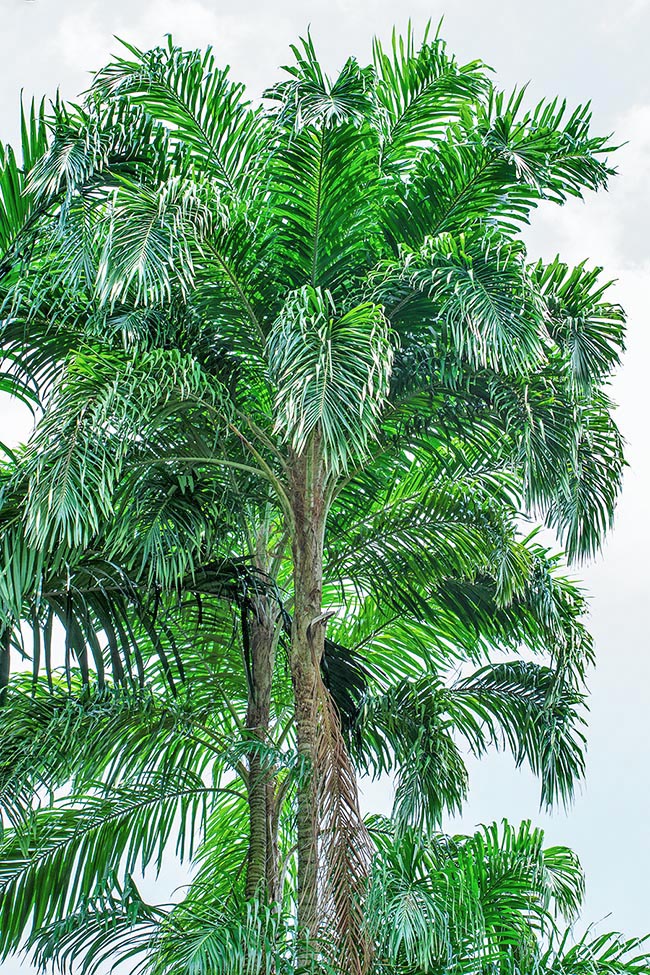 Up to 20 m tall, Bactris gasipaes is one of the most cultivated palms in South American tropical and subtropical areas © Giuseppe Mazza

Due to its vast diffusion, the origin area of Bactris gasipaes is not completely certain. It is thought that it may coincide with the Amazonian area of Colombia, Ecuador, Peru and Brazil. It is found in the mountain forests around the 800 m, even if in Colombia it reaches the altitude of 1800 m.

The name of the genus Bactris comes from the Greek epithet “bactron”, that means stick, and refers to the use of the stems of some species of the genus.

The specific name gasipaes comes from the common name given to this palm in Brazil.

It is known that this species has gotten more than 300 different local names, all dating from the pre-Columbian era. The most common names are peach palm (English), pejibaye (Spanish), pupunha, chontaduro (Portuguese).

Bactris gasipaes is a monoecious, multi-stemmed species, thin, with stems of about 20 cm of diameter, up to 20 m tall.

The fast-growing stems are totally covered by rigid black thorns, but in correspondence with the annular scars at the bases of the fallen leaves, spaced of about 20 cm.

The length of the thorns decreases from the base of the stem towards the crown. In the oldest plants the thorns tend to fall in the low part of the stipe, leaving the surface smooth. In cultivation they have produced cultivars without thorns.

The crown is formed by 10/20 pinnate leaves, up to 3 m long, of dark green colour. The pinnulae, in numbers varying from 200 to 400prt leaf, up to 60 cm long and 4 cm broad, present small thorns on the central vein. The pinnulae are grafted onto the rachis in different levels, a circumstance that gives the leaf a feather look. The up to 1 m long petiole is covered by small thorns, like the sheath that continues the petiole and wraps the trunk. The inflorescence, initially contained in semi-thorny bracts up to 70 cm long, is interfoliar and its length varies from 50 to 100 cm. The inflorescence is ramified in two orders, with up to 80 cm long rachis on which are inserted 30 to 100 rachillae of the second order, up to 45 cm long rachis. The yellowish flowers are arranged in triads, one female flower between two male ones and the female flowers bloom first to favour the crossed pollination. Blooming takes place twice a year. 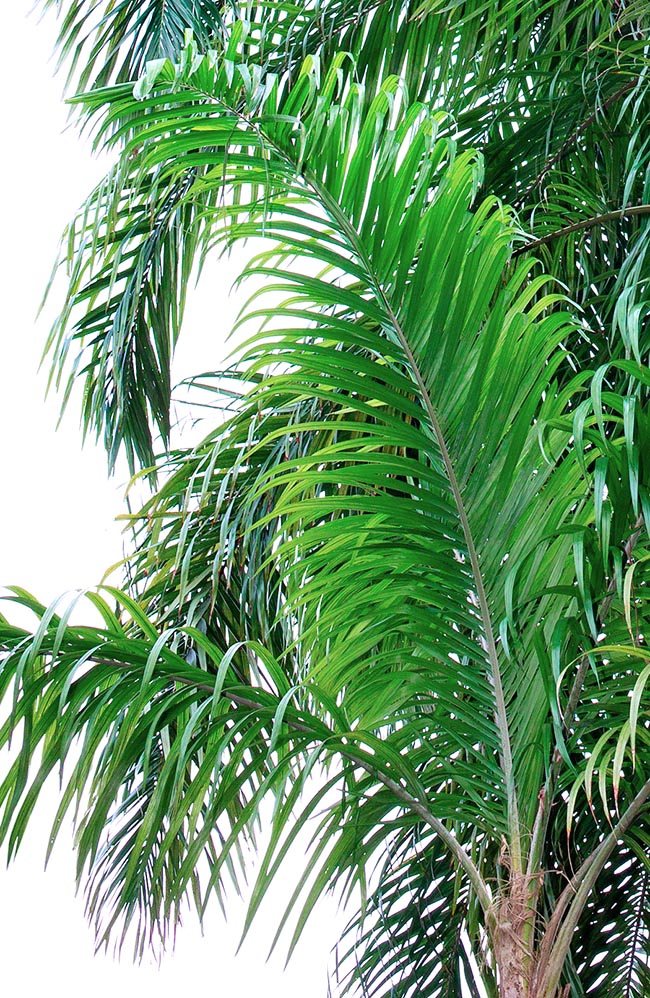 The two varieties differ only for the size of the fruits and recent studies on the nucleus of the DNA have confirmed their strict correlation.

The fruits of the cultivars of Bactris gasipaes var. gasipaes vary from yellow to orange, to brown colour and contain only one seed. Also, the shape is variable from ovoidal to spherical, with up to 6 cm of length and up to 5 cm of breadth. They are produced in great number and each inflorescence can carry up to 20 kg of fruits. The plants remain productive for 50-75 years. The fruits of the wild variety Bactris gasipaes var. gasipaes are up to 2,5 cm long and up to 2 cm broad.

In cultivation, they are selecting the cultivars that produce parthenocarpic fruits, seedless, called “male plants”.

Bactris gasipaes has been one of the most cultivated palms of all subtropical America since ancient times. As ornamental palm, it can be often admired in the botanical gardens of the tropical countries, but is not frequently cultivated in parks and gardens, especially because of its dangerous thorns present in a great part of the palm.

This species survives well in the hills over the 800 m, with rainfalls between 200 and 400 cm distributed all over the year. In the plain with higher levels of rainfalls it is not able to take root and to produce adequately.

Bactris gasipaes can grow on various typologies of soils, acidic to clayey that however must always be well draining because this species does not stand the water stagnation, even if they need a great availability of water.

This species stands sun exposure or the half shade, but is essentially tropical and the ideal yearly medium temperatures of cultivation vary from 18 and 24 °C.

Bactris gasipaes is reproduced by seed or by suckers, collected at the base of the adult plants.

The seeds must be dried in the shade for some hours before to be planted and easily sprout in 3 months.

For centuries, Bactris gasipaes has been the most cultivated palm by the Amerindian populations for food purposes. The fruits are rich in proteins (42%), carbohydrates (50%), amino acids and vitamins, and poor in fat (6%). Still now the plants are cultivated also intensively for the production of the fruits that are locally consumed, fresh, dried boiled, smoked, or left to ferment for some days with water and sugar to obtain an alcoholic drink.

The pericarp of the fresh fruit contains crystals of calcium oxalate and an inhibitor of the trypsin, substances that render difficult its digestion, and for this reason that are mainly consumed boiled. 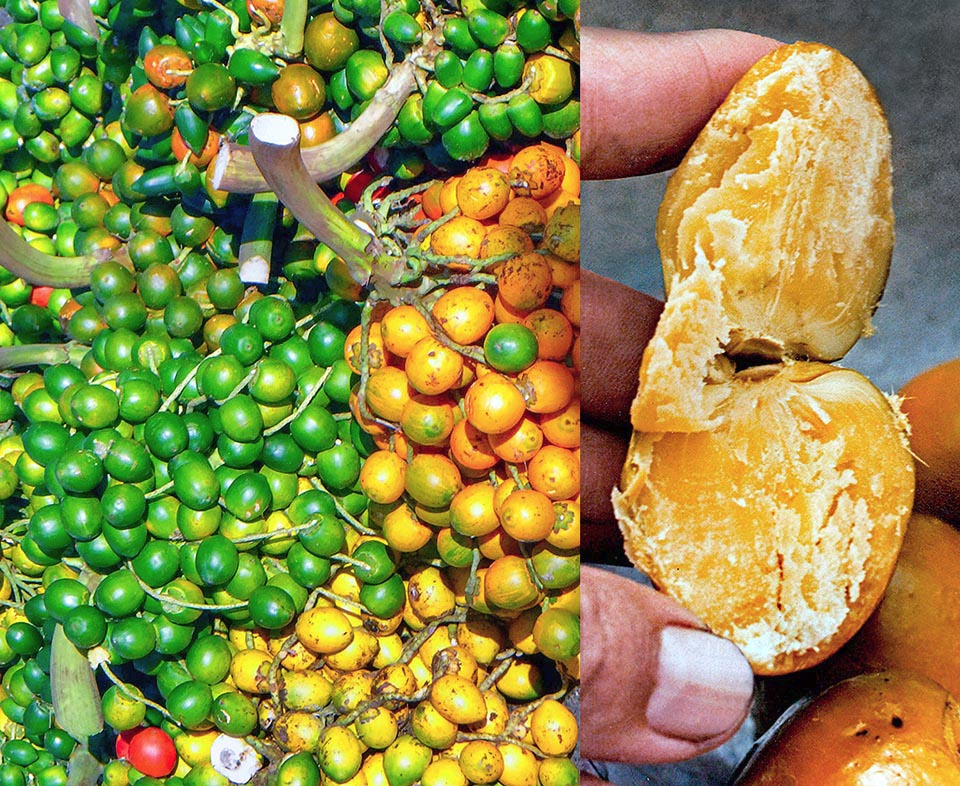 From the fruit they get a type of flour without gluten, and an oil utilized for cosmetics products and soap. The second choice fruits are finally utilized in breeding animals.

The pith of the palm is used as palmito in salads, soups and in stuffed cakes by the local populations and in traditional medicine. The roots are utilized as vermifuge. The wood of the stems of Bactris gasipaes, once used by the Amerindian populations for making bows and arrows, is now used to make furniture, floors and furnishings.