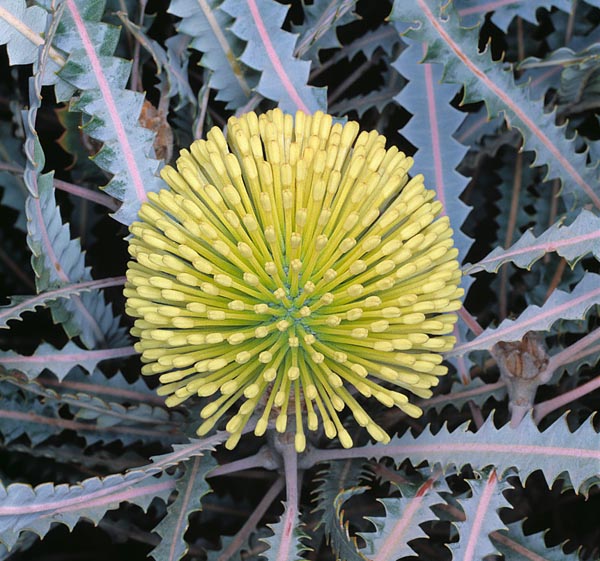 The species is native to south-western Australia where it grows on deep sandy or stony and poor soils between the cities of Perth and of Geraldton.

The Banksia candolleana Meisn. (1855) is a slow-growing shrub, evergreen, much ramified and compact, up to about 1,5 m tall.

The leaves are alternate, linear, with deeply incised margins having triangular lobes with pointed apex, 15-40 cm long and up to 2 cm broad, of intense green colour on the upper page, green grey below.

The inflorescences are terminal, on short peduncle, ovoid, up to about 7 cm of diameter, carrying numerous flowers with 2-2,5 cm long tepals, externally pubescent, and 2,5-3,5 cm long style, of golden yellow to pink orange colour.

The one to five fruits are prominent and persistent woody follicles, helically placed, 2-6 cm long and 1,5-3,5 cm thick, whose opening and resulting release of the seeds, is caused by the periodical fires taking place in the region. It reproduces by seed, without any other particular pre-treatment, which takes 3 to 10 weeks for germinating, at the temperature of 18-22 °C, and 3-4 years or more for the first blooming, to be placed in sandy loam kept humid until germination, utilizing preferably single containers, being rather sensitive to the transplant. Relatively little cultivated species, but of undoubted ornamental characteristics due to the foliage, the globose inflorescences and the typical fruits, it requires a climate of Mediterranean type with mild winters and long and dry summers, when dry it stands lowest temperatures up to about -4 °C, for a very short period, and well rooted resists to long drought periods. Cultivable in full sun or partial shade on even poor soils, provided well drained, sandy, acidic and with low levels of phosphorus, it is therefore important to avoid the use of fertilizers containing the same.

It is particularly sensitive to the rooting rottenness in humid location and in zones with summer rainfalls, in these climates it may be grafted on similar resistant species, such as the Banksia aemula R.Br. (1881). It resists to the fire thanks to the presence of the lignotuber, upper part of the root, enlarged and lignified, which allows the plant to regenerate after the fires. Utilizable in Mediterranean type gardens as isolated specimen or for borders, it also adapts to the cultivation in pot with a particularly draining sandy substratum.