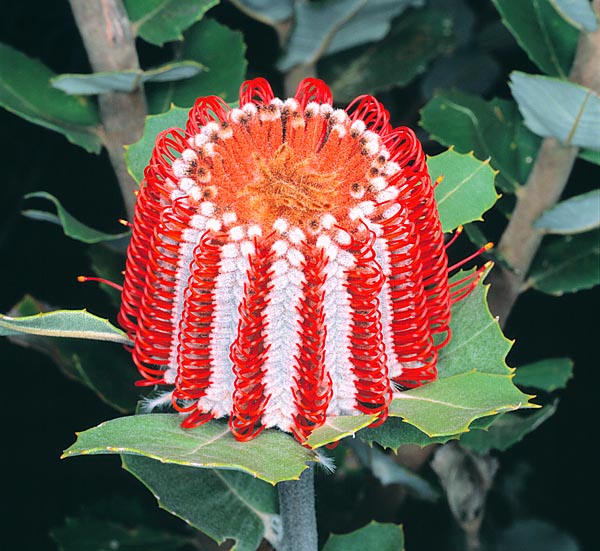 The species is native to south-western Australia, between the cities of Albany and Esperance, where it grows in the coastal woods on deep and sandy soils.

The genus is honoured to the botanist and naturalist Joseph Banks (1743-1820) who took part to the scientific expedition (1768-1771) of Capt. James Cook on the Endeavour; the name of the species is the Latin adjective “coccineus, a, um” = scarlet, with reference to the colour of its flowers.

The Banksia coccinea R.Br. (1811) is a shrub or a small erect tree, evergreen, up to about 8 m tall, even if in cultivation it keeps lower, with greyish bark and tomentose branches.

The leaves, on an about 0,5 cm long petiole, are alternate, obovate-cuneiform or oblong with truncated apex and toothed edges, 3-9 cm long and 2-7 cm broad, of green colour on the upper page, greyish white below.

Erect terminal inflorescences, cylindrical, 4-8 cm long and of about 8 cm of diameter, carrying numerous flowers vertically lined with pale grey corolla, externally villous, 3 cm long, and scarlet style horizontally wrapped before the opening, then stretched, 4-5 cm long. The fruits are ellipsoid woody follicles, tomentose, about 0,7 cm long. It reproduces by seed, without any particular pre-treatment, which takes 2-8 weeks for germinating and 4-5 years for the first flowering, in sandy loam kept humid until germination, preferably utilizing single containers, being rather sensitive at the transplant; the reproduction by cutting is rather difficult.

One of the more cultivated Banksia for ornamental purposes, for the foliage as well as for the showy inflorescences, it grows well in Mediterranean type climates with mild winters and long and dry summers, it bears temperatures as low as about -4 °C, for very short period, and well rooted resists to long periods of drought.

It requires full sun or partial shade and even poor soils, provided well drained, sandy, acidic and with low levels of phosphorus, it is therefore necessary to avoid the utilization of fertilizers containing it; it is particularly sensitive to the root rottenness in humid location and in zones with summer rainfall caused by Phytophthora cinnamomi.

It does not resist to the fire, having no lignotuber, the upper part of the root, enlarged and lignified, which allows the plant to regenerate after the fires. Much utilized as cut flower in the floral compositions and for such reason amply cultivated and its flowers, fresh as well as dry, exported.