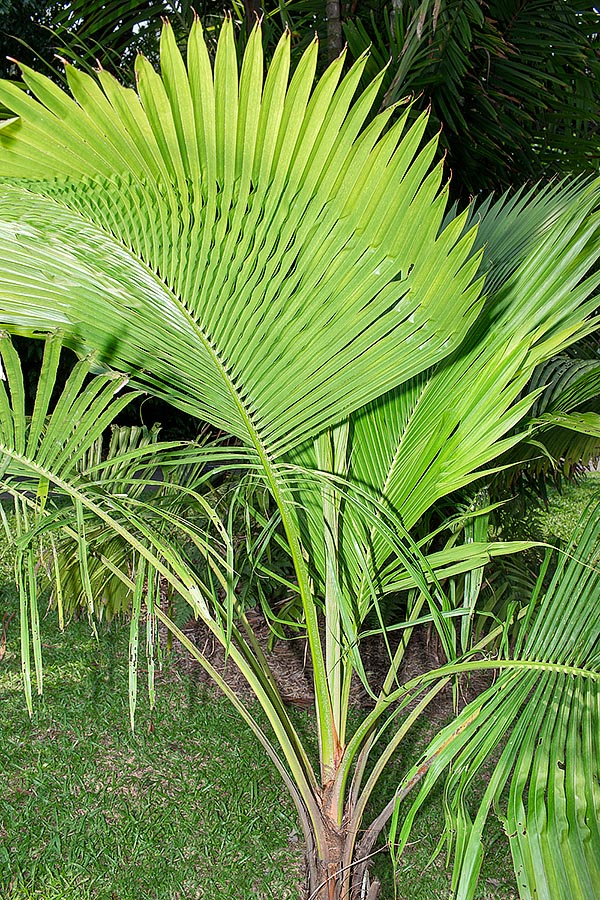 Beccariophoenix fenestralis is a very rare Madagascar palm, at major extinction risk in nature, with a characteristic fenestrations of the leaves near the rachis in the young plants © Giuseppe Mazza

The species is native to eastern Madagascar (East Ramonafana National Park) where is present with few specimens in degraded areas at low altitudes.

The name of the genus is the combination of the name of the Italian botanist and naturalist Odoardo Beccari (1843-1920), for whom the palms were one of the main interests, and of the genus Phoenix ; the specific name is the Latin adjective “fenestralis, e” = fenestrated, with reference to the fenestrations present close to the rachis in the leaves of the young plants.

The Beccariophoenix fenestralis J. Dransf. & Rakotoarin. (2014) is an unarmed monoecious species with single stem, erect, up to about 15 m tall and to 35 cm of diameter, of brown colour on which are visible the rings traces of the leaves fallen spaced of about 5 cm; at the base is often present a mass of adventitious roots.

The leaves, on short petiole, are pinnate, 4-4,5 m long, with about 160 pairs of linear-lanceolate pinnules regularly arranged along the rachis, long in the median part about 110 cm and 7 cm broad; the foliar base with fibrous margins, about 1,5 m long, embraces the stem only partially.

Inflorescences, on short peduncle, under the leaves (infrafoliar), unlike those, interfoliar, of the other two species belonging to the genus, 0,6-0,9 m long, with ramifications of the first (rarely second) order, initially enclosed in a woody bract, about 70 cm long, covered by thick tomentum, of reddish brown colour, bearing unisexual flowers arranged in triads (a female flower between two male ones), except in the terminal part where are present only male flowers, solitary or in pair. 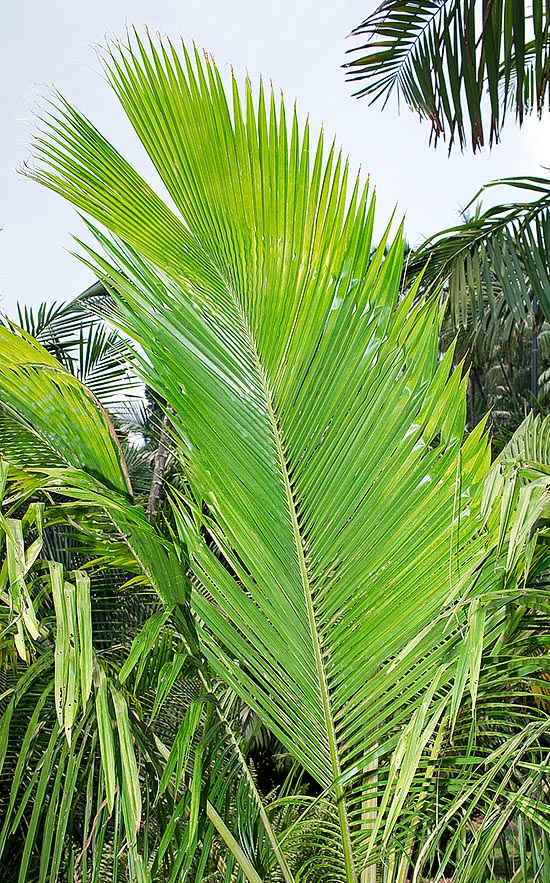 It reproduces by seed, previously kept in water for two days, in sandy loam rich of organic substance maintained humid at the temperature of 26-28 °C, with germination times of 1-3 months. Species at very high risk of extinction in nature, but whose seeds since 1990 have been distributed and commercialized and nowadays many specimens are present in botanical gardens and at passionate collectors. Initially seeds coming from different locations were distributed under the name of Beccariophoenix madagascariensis Jum. & H.Perrier (1915), species deemed extinct for many years and “rediscovered” in 1986.

The interest aroused among the collectors by the finding of several specimens as a consequence had a remarkable requirement of seeds, but soon became evident the presence of two typologies in the young plants, one with evident fenestrations and the other devoid, that were indicated and commercialized with the names B. madagascariensis “windows form” and B. madagascariensis “no windows”.

Due to such difference along with other particulars, a suspect was born that they were not the same species, the certainty has occurred when it was possible to verify other considerable differences in the inflorescences, in the flowers and in the fruits that have led the botanists John Dransfield and Mijoro Rakotoarinivo to describe in 2014 the “windows form” as a new species, distinct from the Beccariophoenix madagascariensis (former “no windows”).

Towering palm tree that reminds quite closely the Cocos nucifera, cultivable in the tropical and humid subtropical climate regions, in full sun and on rich soils, preferably sandy, acidic or neutral, where it grows quickly and vigourously. While resisting to lowest values of temperature, if exceptional and short lasting, up to about -2 °C, has shown poor adaptation to the milder climates of Mediterranean type, with warm and dry summers and cool and rainy winters, with slow and rather stunted growth and look often chlorotic, preferring during the first years a partially shady position. It requires frequent waterings, especially in the dry periods in presence of high temperatures, and fertilizations with products balanced with microelements, in particular iron, under the form of chelates.