The species is native to southern India (Tirunervely and Travancore) where it grows in the under-wood of the humid forests of the Western Ghats at about 1000 m of altitude.

The genus is honoured to the French naturalist and collector Michel Begon (1638-1710), who was the governor of the French Caribbean colonies; the name of the species is the combination of the Latin substantive “floccus” = wool bow and of the verb “fero”= to carry, with reference to the woolly tomentum of the leaves and the petioles. 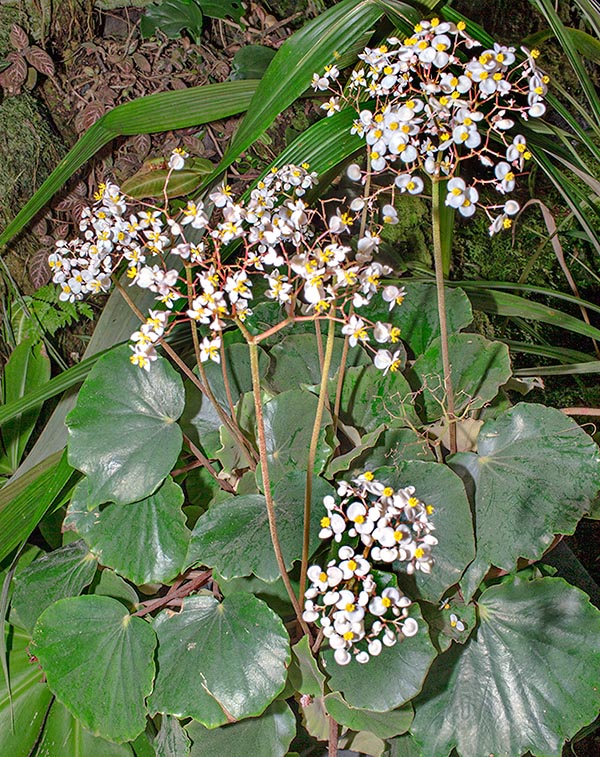 Native to southern India, the Begonia floccifera has 30-40 cm tall white inflorescences The leaves, before tomentose and then glabrous, have a variable shape and display interesting medicinal virtues © G. Mazza

The Begonia floccifera Bedd. (1869) is an evergreen perennial monoecious herbaceous species, rhizomatous, acaulescent, up to about 25 cm tall. The leaves, on a tomentose petiole 5-25 cm long, are of very variable shape and dimensions on the same plant, coriaceous, semi-cordate to almost orbicular with irregularly sinuate margins, usually larger than long, of about 8-12 cm of length and 10-16 cm of breadth.

The young leaves are initially covered by a thick whitish or yellowish tomentum on both sides, then, above, they become glabrous and of intense green colour. Solitary inflorescences or 2-3 at the same time, 30-45 cm long, formed by a robust erect scape ending in a compound cyme, of 8-12,cm of diameter; with unisexual flowers on thin pedicels.

Male flowers with 2 almost circular white tepals, of about 0,7 cm of diameter, and numerous stamens with yellow anthers.

Female flowers with 4 tepals almost similar to the male ones, 3 styles bilobate at the apex of yellow colour, and inferior ovary, trialate, about 1 cm long, and 0,7 cm broad. The fruits are winged capsules, about 1,2 cm long and 1,6 cm broad, wings included, containing several tiny brown seeds.

It reproduces by seed, but usually and easily by division and cutting, also leaf, in draining loam maintained humid at the temperature of 24-26 °C.

Of easy cultivation, it can be utilized as soil cover or for borders in the gardens of the tropical and humid subtropical climate zones, in shady to slightly shady position, on soils rich of organic substance, slightly acidic to neutral. Elsewhere, it is to be cultivated in pot with a good drainage to be sheltered during the coldest months in a very luminous environment with high humidity, 65-80 %, and lowest minimum temperatures over the 15 °C.

Watering must be regular, but allowing the upper layer of the loam to dry up before giving water again, in particular in winter when the plant is resting, avoiding stagnations that may easily cause rottenness.

The leaves are utilized in the Indian traditional medicine for some pathologies, to relieve joint pains and as tonic. Laboratory studies have evidenced the presence in the plant of compounds having antioxidant and antibacterial activity of possible interest for the official pharmacopoeia.