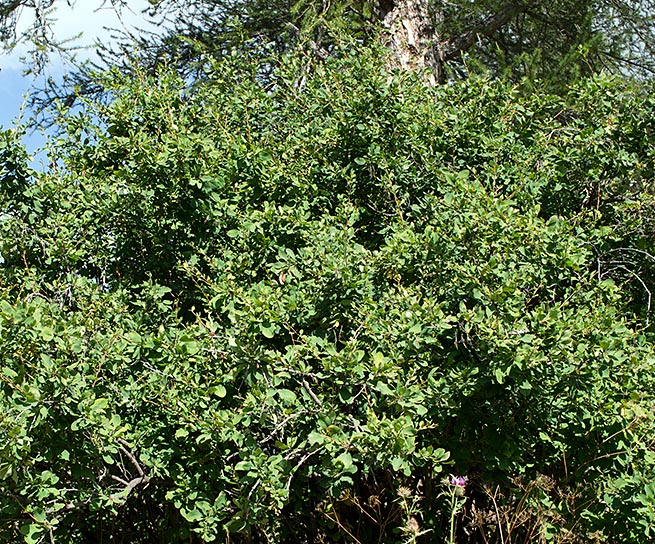 The genus Berberis includes about 450 species (after some authors up to 500) of small trees and evergreen shrubs even 5 m tall, with spiny branches, present in all the temperate and subtropical regions of the world, especially in the northern hemisphere.

The barberry (Berberis vulgaris L. 1753) is a species with Eurasiatic range diffused in Europe, Asia and Caucasus up to Japan, naturalized in the USA and in some other countries of the world.

The name of the genus should come from “berbêrys”, the Arabic name of the fruits of this shrub, but the etymology is disputed and there are many other hypothesis; the name of the species “vulgaris” means in common Latin, known by the people.

It is a small deciduous, glabrous, thorny, shrub 1 to 3 metres tall, with many stems more or less erect, curved outwards, with grey-yellowish or yellow-brownish bark, greyish branches having the look of dried wood, recumbent and spiny. The wood is of good quality and has a nice golden yellow colour.

The leaves are simple, shortly petiolate, alternate or in groups developing at the axil of 2-3 spines. They have obovate-elliptic blade, with obtuse apex, rather rigid, with finely indented and spinulescent margin, dark green over and paler below. They are merged in clusters at the axil of leaves transformed in spines.

In our countries, the flowering takes place in April-May; the small yellow flowers are merged in 15-30 in axillar hanging racemes. The flowers appear in April and the blooming continues up to June; they have 6 sepals and 6 petals (5-7 mm) yellow, and present an odd characteristic: if we touch internally with a toothpick the base of the filaments of the stamina, adherent to the petals, they snap closing inwards. 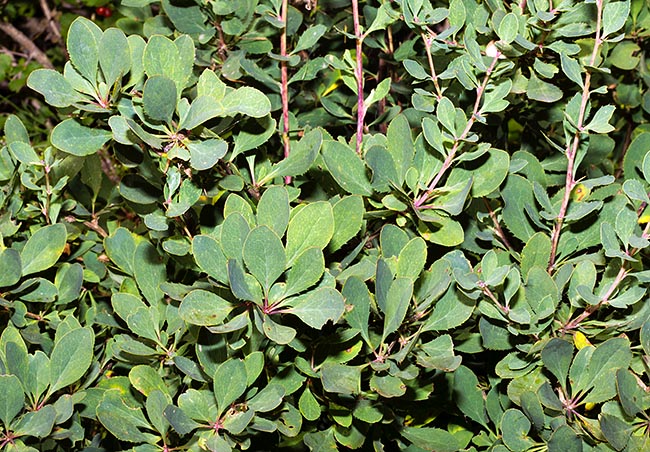 The leaves, alternate or grouped, indented or spiny, paler below, grow at the axil of 2-3 spines © Giuseppe Mazza

This is an adaptation the plant has developed for favouring the transportation of the pollen by the insects that, while looking for the nectar, activate the “trap”.

The fruit is a small oblong berry, initially green, then bright red up to dark red when matured, of acidulous taste, with (1) 2-3 (5) seeds with horny-membranous tegument.

Berberis vulgaris is a very variable species so much that several subspecies have been proposed, like, for instance, aetnensis and australis, which present, however, characters of transition between the one and the other and therefore, not accepted by many Authors who consider them as variations due to adaptations to the growth edaphic conditions. The multiplication, besides by seed (diffused by the birds greedy of the fruits) is done by layering and by cutting.

The barberry is a heliophilous-thermophilous plant, but often lives also in the dim light; loves the dry locations, stony and rocky, the clearings and the degraded woods, the dry thickets on poor soils, usually with alkaline reaction, from the plan up to two thousand metres of altitude in the conifer woods. The rooting system is composed by strong and numerous roots which creep in the soil surface and originate several shoots and render this plant useful in the consolidation of slopes and escarpments submitted to the erosion caused by the wind and the sliding of the water.

Many species of barberry are utilized in the gardens and in the parks for making fences and coloured spots, which we remind: Berberis thunbergii and its varieties, Berberis aggregata, Berberis chenaultii, Berberis hookeri, Berberis darwinii, Berberis buxifolia, Berberis julianae, etc., besides numerous hybrids. 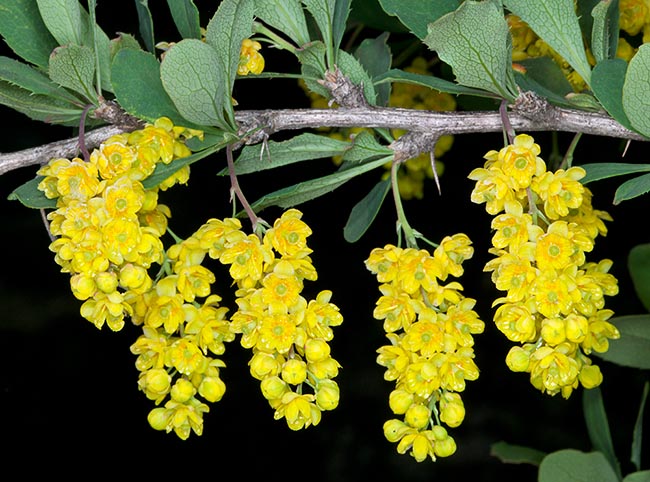 We must recall also some other positive aspects of this species employed in the past in phytotherapy (bark of the roots, leaves and fruits) as stimulant of the gastrointestinal, cholagogue, hypoglycaemic, hypotensive and haemostatic secretions, whilst the leaves are astringent and aromatizing.

The bark of the roots, taken in November, contains isoquinolinic alkaloids (berberine, oxyacanthine, berbamine, etc.). The leaves contain berberine (toxic at not adequate doses!), iatrorizine, columbamine, palmatine, isotetrandrine, bervulcin, magnoflorine, glucose, levulose, tannins, resin, malic acid and tartaric acid. They are collected in May and have antiscorbutic, astringent and diuretic properties. The fruits (August-September) are used for preparing jellies and refreshing and antiseptic syrups.

Presently, the main use of the plant is as ocular tonic in the cases of hypersensitivity of eyes, inflammations of the eyelids and of connective inflammations of allergic origin. It is employed the berberine chloride (alkaloid present especially in the bark of the roots).

This has remarkable antimicrobial and anti-secretory properties, useful in treating various infections such as the bacterial diarrheas and the relapses by Candida albicans; it hinders the proliferation of the staphylococcus aureus. Recently, they have discovered a remarkable anticholesterol activity, which, contrarily to the statins which limit to inhibit the synthesis of the cholesterol by the liver, the berberine improves the managing of the cholesterol and enhances the effects of the natural inhibitors of the receptors of the cholesterol. They are studying also the anti-neoplastic effects of the alkaloid against the various types of tumour cells. 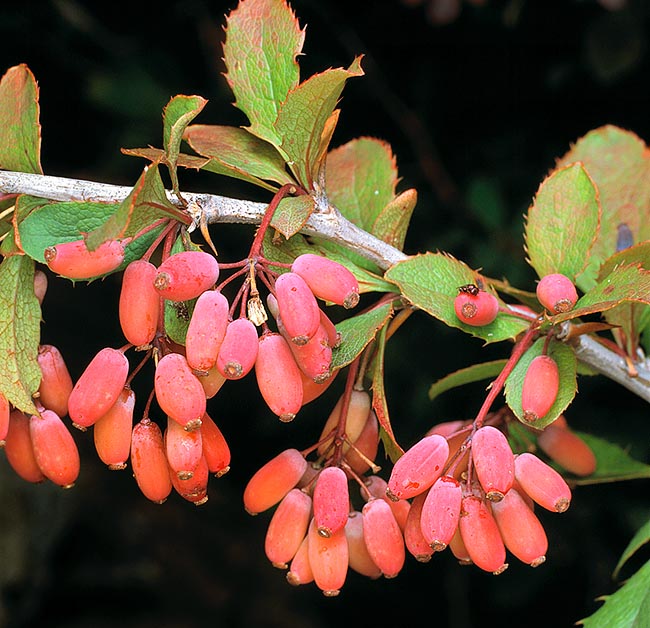 Stubbed to fight the wheat rust, it's a medicinal plant with edible fruits © Giuseppe Mazza

Nowadays, it is rare to see the barberry far from the woods and the wild locations in our countries, once, in the past, amply cultivated with wheat. These bushes were mostly extirpated when they discovered that their leaves hold, as intermediate partner, the feared fungal disease known as wheat black rust.

The wood, the roots and the bark of this bush are rich of a yellow colouring substance employed in the past to dye leather and fabrics.

The fruits are edible but are usually transformed in palatable and refreshing jams, or preserved in salt like the capers. In this context please find here below the recipe for the “Barberry Jelly”:

For one kg of well ripe berries, washed and dried, it is needed one kg of sugar and a small glass of water.

The whole is to be boiled for twenty minutes, then remove from heat. Once lukewarm, the preparation gotten is to be sieved for eliminating the seeds and the peels, and the syrupy liquid obtained is to go back to low heat until you get a syrupy concentration. Put in sterilized small glass pots and place them to boil for few minutes.

They are to be conserved in cool, dry and dark location.

→ To appreciate the biodiversity within BERBERIDACEAE family please click here.