The Bodianus anthioides (Bennett, 1832) belongs to the class of the Actinopterygii, the ray-finned fishes, to the vast order of the Perciformes, that counts more than 150 families, and to the family of the Labridae, rich of 71 genera and 549 species with dimensions included between 4,5 cm an 2,3 m of length. Fishes with very often a protrusible mouth, that can bend outwards to seize the preys. Fishes that with the growth change often sex, with females for instance that revive their colours when becoming males, present in the Atlantic Ocean, in the Indian one, in the Pacific an in the Mediterranean Sea.

The name of the genus Bodianus, that counts about thirty species, comes from the Portuguese term “bodiano, pudiano” = shame, seen that the fore part of the fish stands out clearly from the remainder of the body, reddened maybe as per shame. 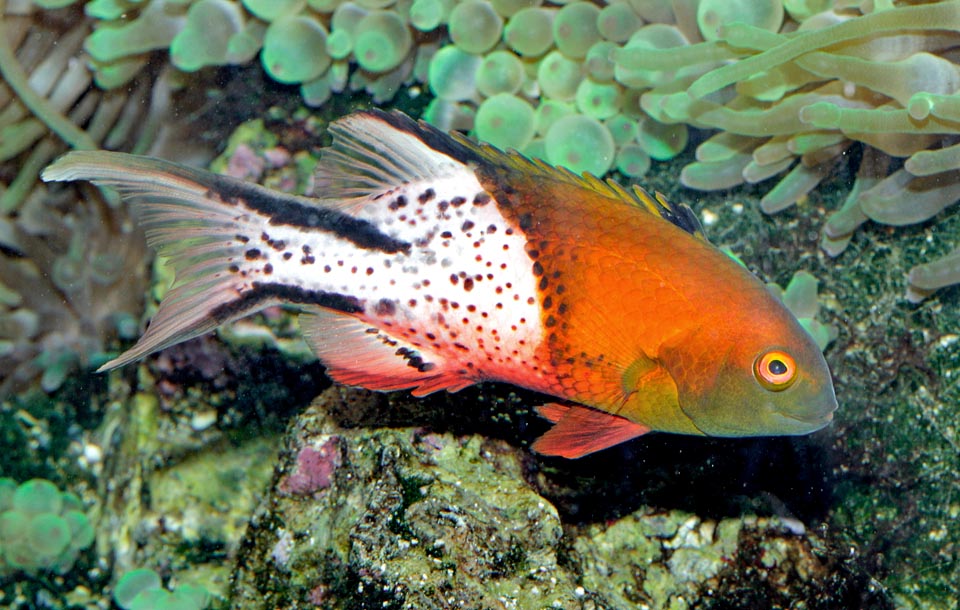 The Bodianus anthioides is at first sight unmistakable, due to the body cut in two by the showy bi-coloured livery and the lyre shaped tail © Giuseppe Mazza

The specific name anthioides gets its origin from the genus Anthias, to which belongs our Anthias anthias of the Mediterranean, in turn coming from the name given by Aristotle to a mythical fish bringing good luck of the fishermen, and in such case, has been added the Greek ending “οιδης” (-oides) = “similar to”, to say that it looks like it, at least visually, seen that actually the Anthias belong to the Serranidae, the family of the groupers.

The Bodianus anthioides has a very vast distribution in the tropical waters of the Indo-Pacific. We find it in the Red Sea and then, after the Gulf of Aden, proceeding along the African coasts, from Somalia to South Africa. Then, eastwards, we find it again at the Seychelles, Réunion, Mauritius, Maldives, Cocos, Christmas Island, Indonesia, Papua New Guinea and Micronesia, and reaches in the north of Pacific the Filipino Islands and Japan. Finally, going south, it is present in the waters of New Caledonia and reaches the Tuamotu Archipelago. 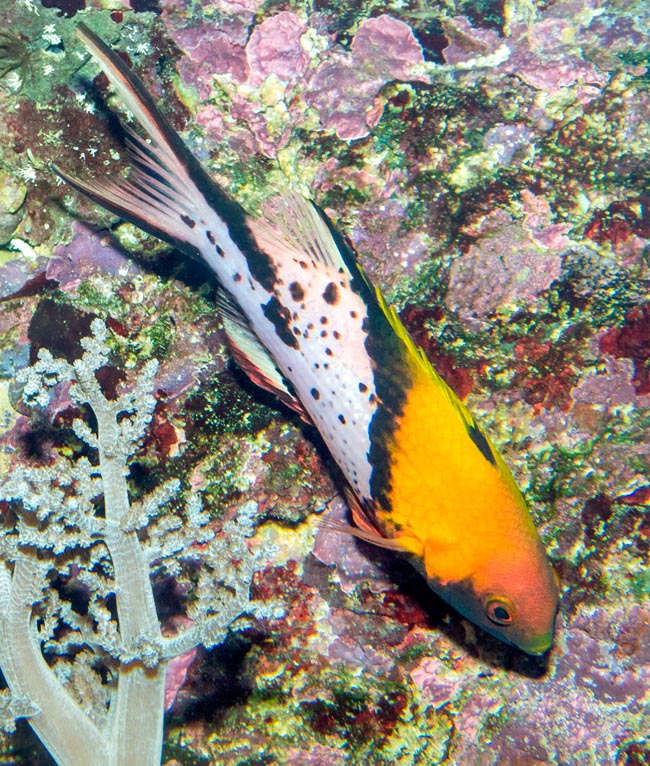 It lives in the Indo-Pacific among madrepores and soft corals, eating crustaceans, molluscs, urchins and small fishes © Giuseppe Mazza

It lives in the madreporic formations between the 6-60 m of depth, where the water is at 23-27 °C and often abound the soft corals and the black ones. It does not fear the currents too much, seen that it is present also on the outer slopes of the reefs.

The Bodianus anthioides can be at most 24 cm long and has an unmistakeable apperance.

As a matter of fact, the fore part of the fish is brown-reddish, separated with a clear cut from the rest of the body that is white, suffused with pink in the big specimens, with small red and brown dots.

The two lobes of the caudal fin, no less characteristic, are emphasized by a long showy brown reddish stripe starting rightly close to the caudal peduncle. In the juveniles the fore part is more orange in colour and these lobes are particularly pronounced with a length 2,5 times higher than that of the ventral rays, hence the vulgar names that in various languages remind the shape of a lyre: “Lyretail hogfish” (USA, Australia and other English speaking nations) and “Labre lyre” in the Maldives islands.

In profile, the head has rounded front and then goes down almost vertically, darker in the lower part. The canines are slightly protruding.

The Bodianus anthioides nourishes of zoo-plankton but also of zoobenthos, that is of the animals it finds on the bottom, and when is the case, of small fishes. In its diet enter regularly crustaceans, gastropod or bivalve molluscs and sea urchins, not to forget, when young, its activity as “wrasse cleaner” looking for turtles and big fishes it gets rid of the ectoparasites.

It carries on a solitary life or in couple, especially during the reproductive period. The parental cares do not exist and after the fecundation the eggs are abandoned to their destiny. 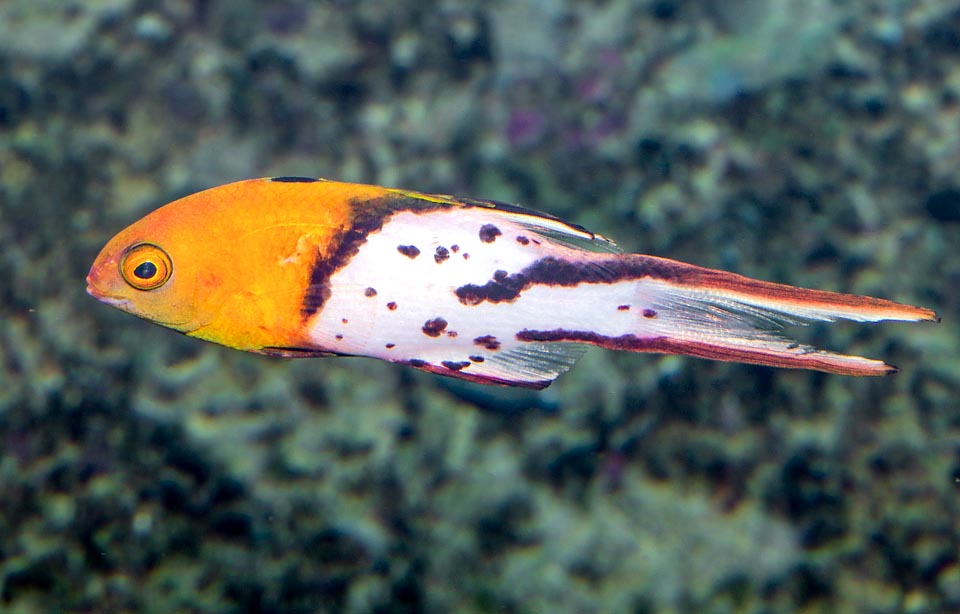 The young have much longer caudal lobes, the head is yellow-orange and being good ‘wrasses cleaners’ devour the ectoparasites of the turtles and of the big fishes © Giuseppe Mazza

During the first juvenile phase the body is translucent with fins edged in white and black. Then the head turns orange yellow and the body becomes white with small red dottings.

In the populations decimated by the events the resilience is good with the doubling of the staff left in 1,4-4,4 years. Even if the Bodianus anthioides is fished for the domestic aquaria, the collection, seen its high cost, is relatively modest and the vulnerability index of the species is nowadays (2020) moderate, marking 39 o a scale of 100.