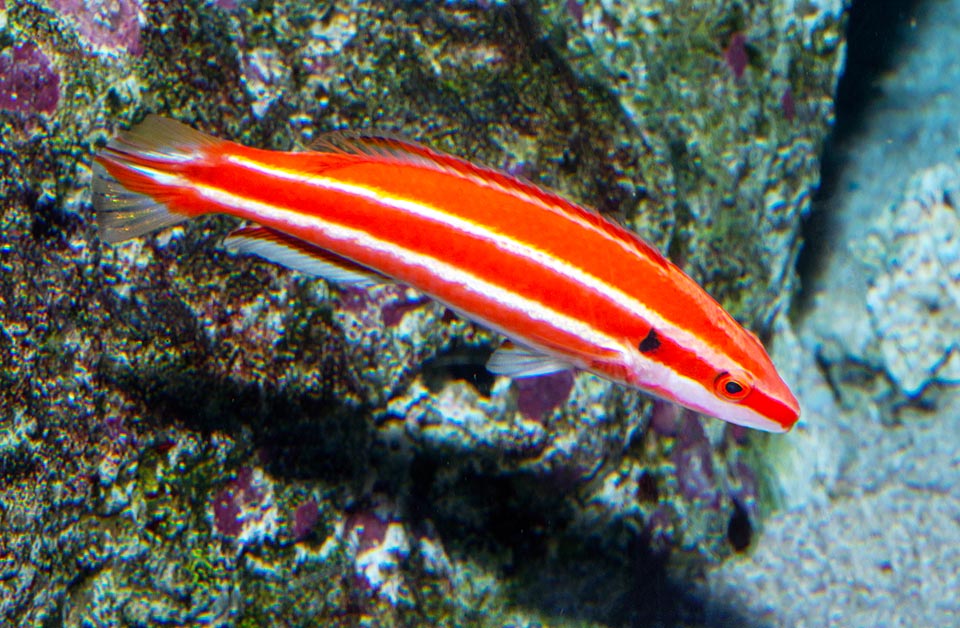 Characterized by 3 showy longitudinal red lines and black dot on the operculum, the Bodianus opercularis is present in the Red Sea and Indian Ocean © Giuseppe Mazza

The Bodianus opercularis (Guichenot, 1847) belongs to the class of the Actinopterygii, the ray-finned fishes, to the order of the Perciformes and to the family of the Labridae, fishes often multicoloured counting 71 genera and 549 species.

The name of the genus Bodianus, assigned to about 30 species, comes from the Portuguese “bodiano, pudiano”= shame, due to its often reddening head, as if for shame, frequent in the fishes. The specific term opercularis recalls in Latin the characteristic black spot on the operculum.

The Bodianus opercularis lives, starting from the Red Sea, in the tropical waters of the Indian Ocean. It is present along the coasts of Somalia and Kenya up to Madagascar, Réunion, Mauritius and then reaches, eastwards, Christmas Island.

It wanders swimming in relatively shallow waters, at 35-75 m, moving on the detrital bottoms, close to crags, on the outer side of the reefs. 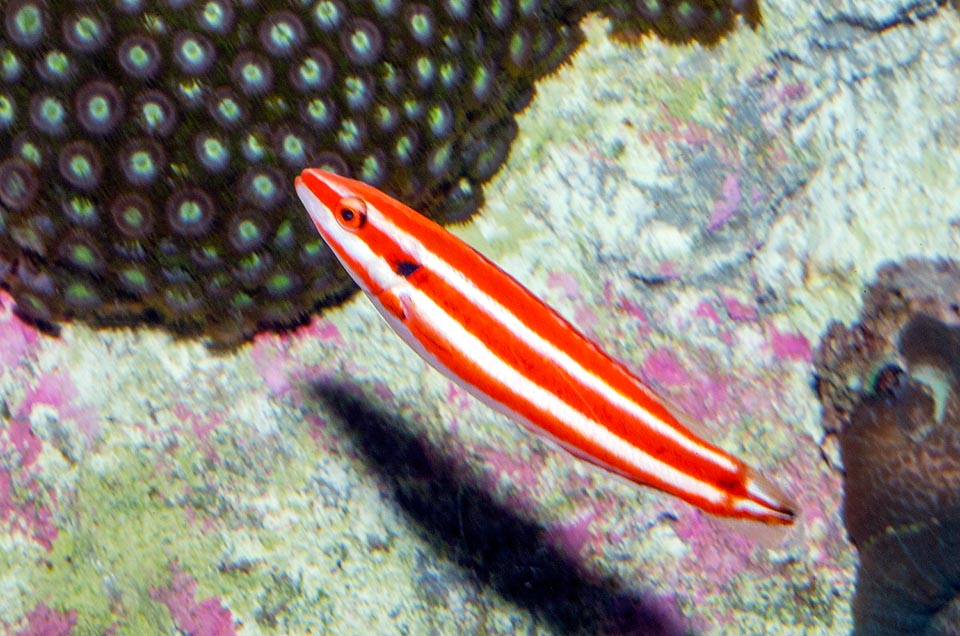 Not more than 18 cm long, lives at quite high depths, between 35-75 m, where the livery flaming colour rapidly turns black © Giuseppe Mazza

It may be 18 cm long, even if the specimens collected for the aquariological market are usually much smaller. The body, slender and elongated, has a pointed muzzle with canines protruding for seizing the food in the ravines.

The livery displays 3 longitudinal red lines on a white background. The first adorns the back, the second, that reaches the central part of the tail, embeds the eye that has an equally red iris, and the black spot on the operculum; the third one precedes the white of the abdomen. And also the fins, but the transparent pectoral ones, display the alternation of their showy parallel bands. Basically, colours mimetic, because the more it goes down, in the depths where it lives, the red colour quickly turns black.

The Bodianus opercularis nourishes of all the small benthic animals it finds while swimming among the corals. 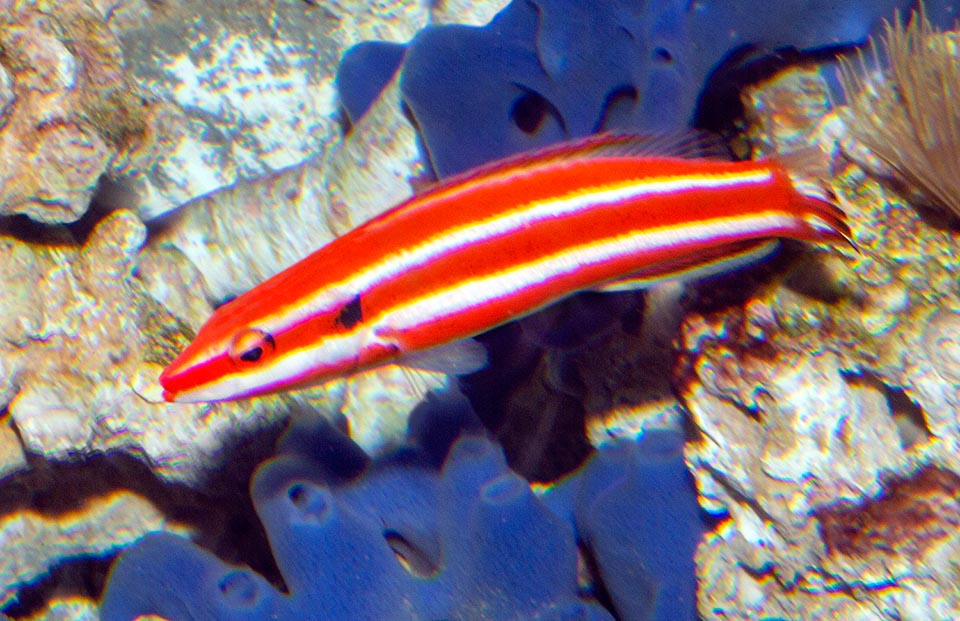 It eats small benthic organisms. Paid at crazy prices for domestic aquaria, the Bodianus opercularis is luckily not an endangered species © Giuseppe Mazza

Not much is known about this species presently object of studies and of taxonomical revisions with similar species of the Pacific Ocean, as the Bodianus neopercularis of the Kwajalein Atoll and of the Marshall Islands, the Bodianus sanguineus frequent in the Hawaii, or the Bodianus tanyokidus present in the Comoro Islands and in Mauritius up to the south of Japan. Often minor differences, to the point of counting the tiny scales of the lateral line, whilst some scholars talk about synonyms. The albeit similar Bodianus sepiacaudus at least distinguishes for the very dark colouring of the peduncle and of the caudal fin.

There are no group weddings and the couples of Bodianus opercularis abandon the fecundated eggs to the currents.

Practically fished only for the domestic aquaria, with prices of several hundreds of Euros for specimen, seen its difficult availability, it is a species with good resilience with a possible doubling of the membres in less than 15 months. Nowadays, in 2020, the vulnerability index is very low, marking just 27 on a scale of 100.

Bodianus opercularis was last modified: May 15th, 2020 by Peppino