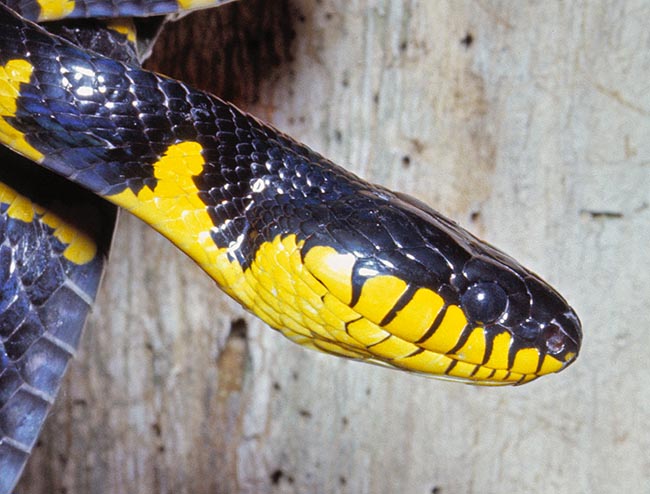 Boiga dendrophila is an Asian venomous colubrid, linked to trees and water, who can exceed 2 m © G. Mazza

With the impressing Gold-ringed cat snake or Mangrove snake (Boiga dendrophila Boie, 1827), known in Italian as Serpe delle mangrovie, in German Mangroven-Nachtbaumnatter, Ularburong, in Spanish as Serpiente del manglar, Ularburong, in Bahasa melayu and in Malaysian as Ular tiung cincin emas, we are talking about, as already mentioned in the case of the Mussurana and of Ahaethulla, of another snake belonging to the family of colubrids (Colubridae), with venom apparatus of ophistho- glyphous type, which, in contrast with the fame of innocuity of the “grass snakes”, it is not entirely harmless.

The Boiga dendrophila is a big Asian snake, which can easily exceed the two metres, with records of 250 cm, and which, highly unlikely, can be mistaken with other reptilians, not even by a layman.

Its size, the robust but graceful body, laterally compressed, the showy colours, where the black or the blue-ink contrasts with bright golden-yellow, the wide and flattened head, the eyes with elliptic vertical pupil, which have granted it the epithet of cat snake, the aggressiveness and decision it uses for facing a potential aggressor, not hesitating in biting enthusiastically and violently, make it an animal that inspires respect and, in many, also fear. We must say at once that, actually, there are even nine subspecies of this colubrid, typical of South-East Asia, whose distribution range spreads from India to Vietnam and, southwards, up to beyond the Philippines and to the Indonesian islands:

Boiga dendrophila latifasciata: Mindanao. Here the yellow bands are wide and often shaped like an hourglass, and delimit, between them, black spaces which may appear oval or roundish. Furthermore, the yellow bands are spotted in black, effect created by the dark skin among the golden scales. 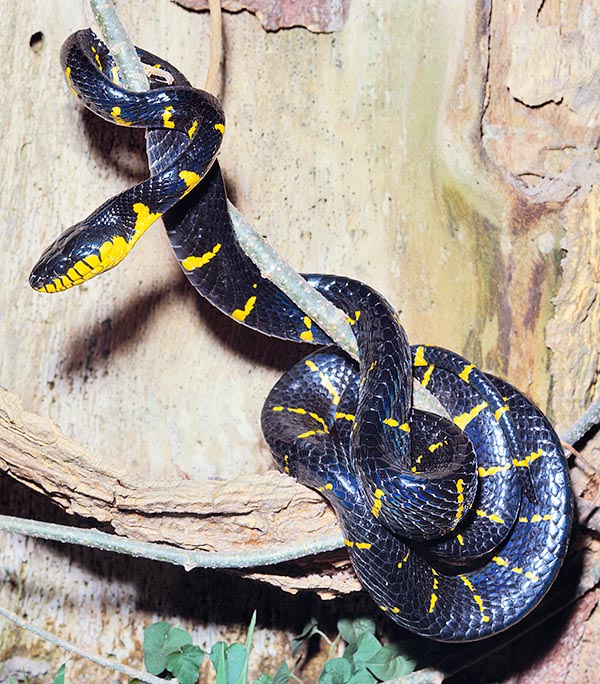 It hunts by night mammals, birds, amphibians, even fishes. It's also a strong constrictor © G. Mazza

The preferred habitat is the humid one, and, as the name suggests, the mangroves forests are one of the favoured habitats, but these reptilians live also in the pluvial forest, always close to the water, the water meadows and the floating prairies, provided with shrubs or emerging plants and do not disdain, at times, plantations and parks where the liquid element is present.

They are nocturnal animals, as evidenced by the eye with vertical pupil, they spend most of their time on the branches (Dendrophila = lover of the trees), but come down to the ground, during the night, for hunting.

The prey, which can be even of a big dimension, for the size of the snake as well as of the mouth with very wide rima, is seized with an instantaneous shooting of the head, with the jaws wide open, and then firmly held, thanks to the hooked teeth and bent backwards.

Being ophisthoglyphous, and being the venom fangs placed back on the palate and only partially grooved, the predator must “chew” the prey, in order to allow the venom to enter the wounds. Even if the strength of the venom is sufficient for killing quickly most of its usual preys, the mangrove snake is also a powerful constrictor. Mammals, batrachians, reptilians and birds are its usual preys, but have been reported also catches of fishes and even of bats, caught on the plants. They also quite often ingest eggs of birds.

For what the venom of these snakes is concerned, well, here we are again: the literature describes it as “mild” and, really, I do not have knowledge of fatal cases in the man, however, in my humble opinion, it is a snake to be treated with respect and cases do exist of poisoning with skin necrosis and haemorrhagic phenomena. Can we be sure at 100% that in a cardiopathic subject or with haemorrhagic diathesis, or in a child, this cannot aver fatal? I would not swear. Not to mention, of course, a potential allergy, but this is a risk we can meet also with a wasp bite and does not depend only on the strength of the venom.

The venom of the Boiga dendrophila contains, inter alia, toxins called “three fingers toxins”, micro-proteins with multiple target. They are proteins of non-enzymatic type, present in the venoms of many snakes, which may have a vast range of effects on the human body: as it has as target also various types of ion channels, they can have neurotoxic effects and it is not excluded that this can be also the case of the venom of Boiga dendrophila. Furthermore, the cat-eye snake venom contains metal protease and cytotoxic principles, creating oedemas, and acting on the coagulation. A not entirely reassuring cocktail.

The reproduction is oviparous and the female spawns 4 to 15 eggs which require 3 or 4 months for hatching. The newborns measure 25 to 40 cm of length.