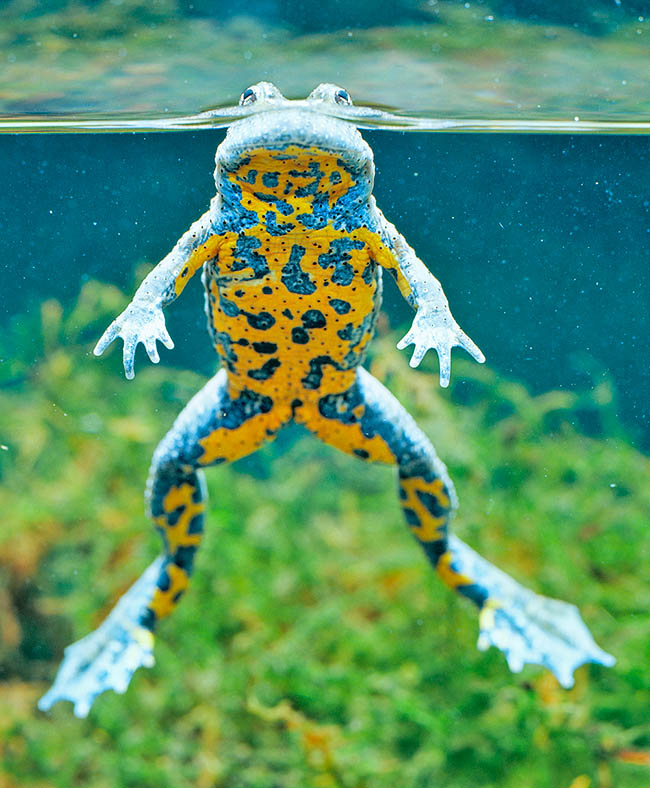 The Yellow-bellied toad (Bombina variegata (Linnaeus, 1758)) belongs to the class of the Amphibia, the vertebrates that spend at least good part of their vital cycle in the aquatic world, to the order of the  Anura, the amphibians having no tail, and to the small family of the  Bombinatoridae.

The species is listed in the Appendix II “Strictly Protected Species” of 1979 Bern Convention for the Conservation of European Wildlife and Natural Habitats, and in the Attachments II and IV of the Habitats Directive (Directive 92/93/CEE). The IUCN Red List as well as its Italian Committee report the species with the status “Least Concern (LC)”.

The name of the genus Bombina comes from the Latin “bombire” = to buzz, coming in turn from the Greek “βομβύλιο” (bombylius) = that makes noise, with reference to the characteristic singing of this species during the reproductive period.

Conversely, the specific adjective variegata, from the Latin “variegatus” = variegate refers to the showy and fanciful ventral patterns.

The Yellow-bellied toad is a European species. Its distribution area has as western limit the Atlantic French coasts, and as eastern, Ukraine, Romania and Moldavia; probably it includes the northern belt of the Pelopponese and in Italy occupies the pre-Alpine and the north eastern regions.

The remainder of the peninsula is occupied by Bombina pachypus, the Apennine yellow-bellied toad, species morphologically quite similar from which it differs only for the area, in fact, today the debate on their synonymy is still underway. It is absent in the Iberian Peninsula and in the islands, whilst the Germanic region is its margin of latitude.

It is a species of slender constitution, its dimensions being quite inferior to those of the other toads: the adults averagelly reach the 5 cm. The body is flat-oval and the back is covered by protruding warts ending with black spines. Also the eyes protrude and the pupil can have the shape of a heart of can be triangular.

The vocal sacs and the tympanic membranes are absent. Its specific name is due to the colouration of the ventral region, characterized by very bright yellow or orange spots, with blue or black veins. The placing and the pattern of the spots are specific to each individual, and this allows the monitoring of the populations with the identification of the individuals through the image processing programs.

Some white dots can also be present. The yellow or orange colourings at times may extend up to the toes and on the legs. Conversely, the back and the rest of the body are of a dark colour, from grey to dark green. This, together with its ability to dive quickly, render an animal elusive and difficult to be sighted.

The sexual dimorphism is evident only during the reproductive period. In the males do take form the typical calli on the first three toes and on the forearm. These serve for the lumbar coupling. 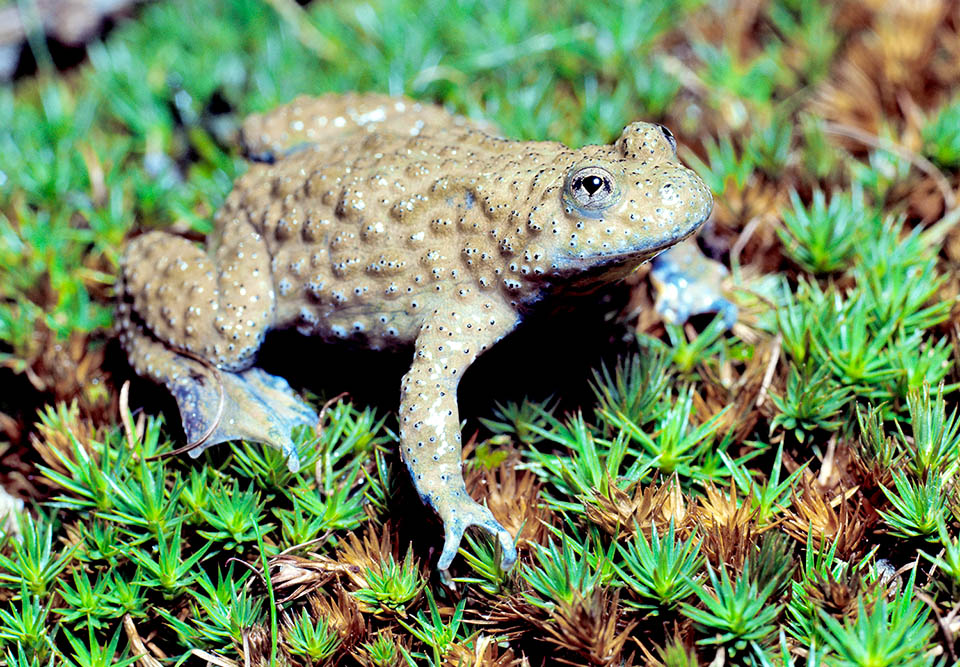 Protected by 1979 Bern Convenction for the conservation of European wildlife and biotopes, lives in hilly and mountain habitats up to about 2000 m © Giuseppe Mazza

The species can be observed in hilly and mountainous environments, averagely between the 300 and the 1000 m of altitude, even if in Italy it goes up to the 1900 m and in Greece may reach the 2100 m.

The environments it frequents are mainly little deep aquatic ones, in particular, the humid zones. Slow-flowing waters, such as small rivers, streams, sources and still waters like lakes and swampy zones. It well adapts also in temporary pools and to not too much anthropized ones, such as troughs or pools for watering the cattle. We can find it in prairies, brushwoods and marginal habitats with temporary pools where it reproduces and in the woods; it can be rarely observed in woods of conifers and of deciduous broadleaves. If the habitat allows, it is possible to find groups of individuals at any stage of development, as proof of their social nature.

During the warm periods, it lives close to water sources, whilst in the winter months it shelters, hibernating in underground refuges. The beginning and ending periods of the hibernation vary depending on latitude and the altitude, but usually stand from early October to early May. The location of the hibernation and of the summer reproductive activity can even be 800 m far away. It bears even a slight level of pollution of the waters, being this a capacity of various species of anurans.

The main threats causing the reduction of the populations of the Yellow-bellied toad are linked with anthropic factors, the ever increasing urbanization and the exploitation of environments, the roads construction and the pollutants being discharged in humid environments cause the loss of habitats and consequently the disappearance of populations. 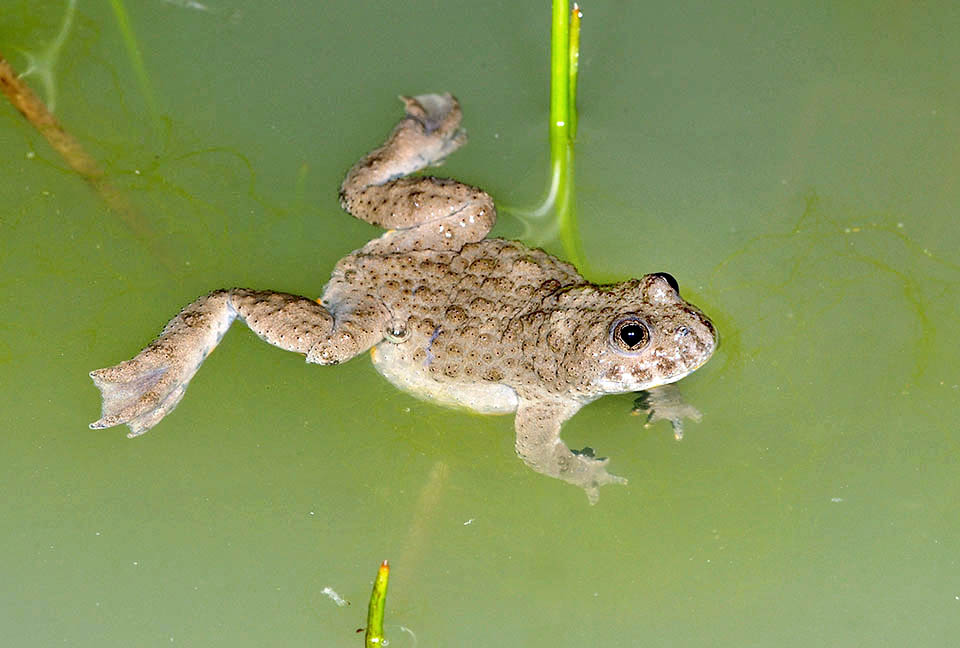 It’s mainly a day amphibian, very elusive, preferring to stay half submerged to then quickly dive upon the first sign of danger. Mainly looks for food on the ground, especially after the rains: odonates, stoneflies, dipterans, molluscs and annelids, without forgetting aquatic invertebrates like grammarids it finds in its habitat © Andreas Meyer

It is a species having mainly diurnal habits, even if, when the temperatures increase, as in summer, it is possible to see it also in the twilight hours. Very elusive, it prefers staying partly submerged in order to be able to dive quickly if scared. The Italian vernacular name of “ululone” = he who bays, is due to the call it emits when floating on the water, a regular but weak “Uh-Uh-Uh”. A peculiarity of the Yellow-bellied toad is its defence behaviour. If feeling threatened, or if the situation does not allow an escape way, it assumes a peculiar position: it archs the back, keeping the legs upwards thus evidencing bright strong colouration of the belly. Another characteristic that brings it together with many species of amphibians is the capacity of expelling from the skin glands a whitish secretion that irritate the glands in order to ward off the predators.

The reproductive period usually begins in May and lasts until late September. During these months the matings take place, as well as the hatching. The individuals can reproduce even more times in a year, especially if heavy rainfall occur and based on the availability of suitable water basins. The places used for hatching and developping the larvae are shallow aquatic basins with slow flowing waters or still waters with muddy bottom. The couplings occur usually during the night. Unlike other anurans that have it of axillar type, the intercourse of the Yellow-bellied toad is of lumbar type: the male clings to the female’s pelvic region and fecundates the eggs during their exit. During the process of the deposition, are collected up to 100 eggs in more or less big masses and then these are clung to aquatic plants or on the bottom of the basin. The hatching iss not is not continuous, but it is divided in intervals of various hours. The males display a strong territoriality: they tend to drive off the other male individuals from the small pools or send them away if they are in large ponds; at times they create with their hind limbs some concentric circles on the water surface in order to frighten the others. 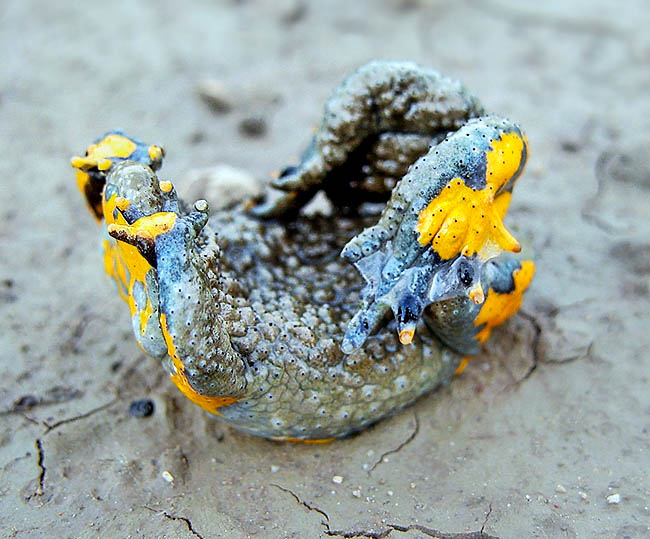 When feels menaced and can’t escape, arches the back, keeping the legs upward to show the high bright colours of the belly: aposematic colours, of warning, indicating the presence of venomous glands © Tiziano Fiorenza

The egg is small with an average diametre of 2 mm, whilst the gelatinous mass protecting it is of about 8 mm. This mass allows the eggs to keep clinging to the bottom or on a plant.

The larvae (commonly called tadpoles), have grey to dark brown colours, are of oval frame and have an arched tail whose membrane extends up to half of the back. The youngest individuals have a particularly thin and transparent epidermis, and several dark lines intersecting reach other in the caudal crest. The tadpoles come to life after about one week and reach a length of 50 mm. As in the adults, they can tolerate a certain degree of pollution of the water and resist up to a temperature of 36 °C.

The larval developement lasts about 40 days, depending on the trophic availability temperature and depth of the basin. After the metamorphosis, the young, now absolutely similar to the adults, but smaller and sexually immature, are about 15 mm long.

Being a species with habits less linked with the aquatic environment, unlike other anurians, its diet is based mainly on terrestrial atroprods. It nourishes of odontes, stoneflies and dipterans, but, occasionally, also eats molluscs and annelids. The Yellow-bellied toad looks for its food mostly on the ground, after the rainfalls, but sporadically aquatic invertebrates such as the gammarids. The larvae nourish of organic plant material like algae or plants, plankton, small aquatic invertebrates and organic debris.

Among the predators of the Yellow-bellied toad we see birds like Nycticorax nycticorax and other ardids, reptiles of the genus Natrix, fishes and some mammals. However, the most dangerous for the populations are the allochthons, such as Micropterus salmoides and Procambarus clarkii  that predate it in all stages of development.