The name of the genus comes from the Greek “βόρασσος” (bόrassos), term with which Dioscorides indicates the spathe where the inflorescence of the Phoenix dactylifera is enclosed; the specific name is the plural genitive of the Latin “aethiops” = Ethiopian, with reference to one of its origin places.

The Borassus aethiopum Mart. (1838) is a solitary dioecious species, massive, with cylindrical stems, 12-25 m tall and of 40-50 cm of diameter, dilated at the base and in the old specimens also in the upper half, up to 70-80 cm of diameter, covered by the intertwined foliar bases, excepting in the oldest part, greyish, wrinkly, marked by the foliar scars spaced 5-6 cm. 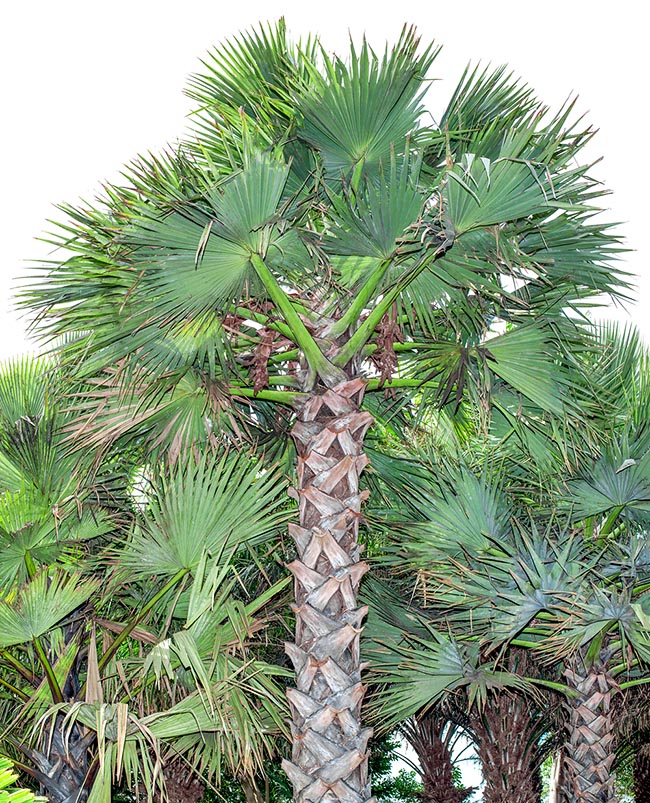 Native to the open forests and the savannahs of tropical Africa, Borassus aethiopum is a solitary palm, imposing, reaching 25 m. Various parts of the plant are edible and utilized in the traditional medicine © Giuseppe Mazza

Costapalmate leaves, orbicular, 3-3,8 m long and broad, divided in 50-70 rigid lanceolate segments, with just bifid apex, united at the base for about half of their length, of bluish green colour. Petiole, 1,2-1,8 m long, irregularly provided on the margins of black teeth of variable shape and dimension, with a wide triangular split at the base.

Inflorescences between the leaves (interfoliar), hanging, the male ones, on a short peduncle, 0,8-1,8 m long, with ramifications of the second order and cylindrical rachillae covered by spirally arranged bracts, imbricate, united at the base to form a sac containing each one up to 30 flowers, that protrude individually in succession, with 3 sepals united at the base, tubular trilobed corolla and 6 stamens. Female inflorescences not ramified on short peduncle, 1,2-2,2 m long, covered by concave bracts containing one single sessile flower, of 2-3 cm of diameter, with 3 sepals and 3 free imbricate petals, 6 staminodes and tri-carpellate globose gynaeceum. Globose fruits of orange yellow colour tending brown, 10-16 cm long, of 8-12 cm of diameter and of about 2 kg of weight, with orange fibrous pulp, edible, containing 1-3 bilobed seeds.

It reproduces by seed, that has a limited germinability duration, usually planted directly, seen that the hypocotyl developping from the seed, and on whose extremity stands the embryo that will originate the plant, can push up to 1 m of depth. The seed is to be put in full sun in deep and draining soils, the first leaf, in the best conditions of cultivation, will start to emerge after 7-8 months. Alternatively, if it is not possible to plant directly the seed, may be utilized deep pots, paying much care in the following phase of transplant in the ground.

Species amply diffused in the open forests and savannahs of tropical Africa, from the sea level up to about 1200 m of altitude; but little cultivated elsewhere, probably because of the slow growth and the imposing dimensions it may reach, suitable only for wide spaces. Cultivable in the tropical, subtropical climate zones and only marginally in the mildest warm temperate ones, where temperatures just under the 0 °C are very short lasting exceptions. It is not particular about the soil, even if poor, slightly acidic to slightly alkaline, provided draining, resists the fires and when adult bears periods of drought.

The pulp of the fruits, that has a strong smell of turpentine, is locally consumed raw as well as cooked, as well as the albumen of the unripe seeds, having a pleasant taste, and the hypocotyl, rich of stark, obtained by germinating the seeds in ditches predisposed for this purpose. From the lymph, collected incising the apex of the palm, they get sugar and a refreshing drink, that fermented gives a very much appreciated liquor, practice resulting in the death of the plant and that has caused a drastic decrease of its presence in some areas. The stems, resistant to the xylophagous insects, are utilized in the constructions, the petioles for fences, the leaves for covers and walls of the rural dwellings and the fibres, obtained from thjose still enclosed, to fabricate bags, mats, fishing nets, brooms and other everyday objects. Various parts of the plant are utilized in the traditional medicine of the various populations for a number of pathologies.