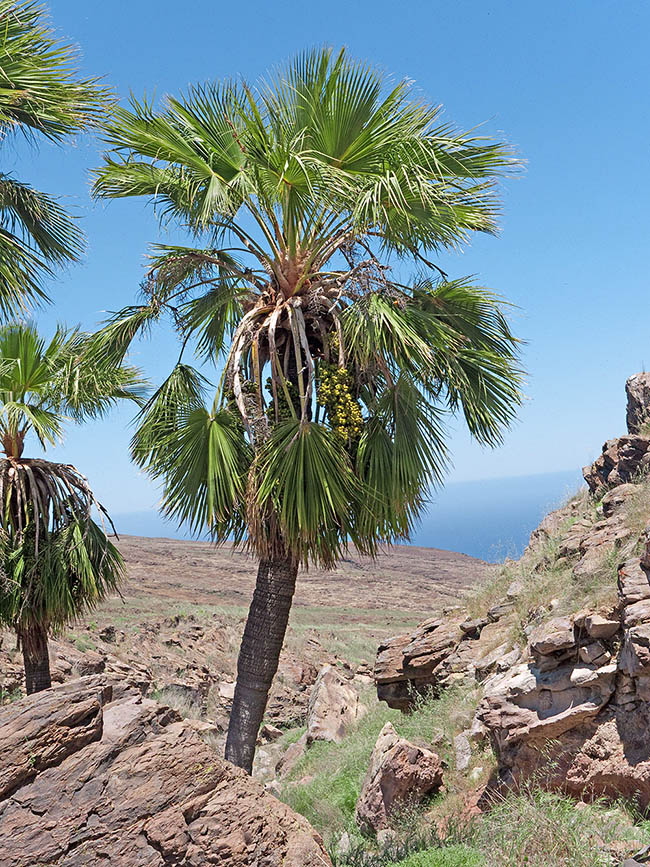 Brahea edulis H.Wendl. ex S.Watson is endemic to the island of Guadalupe, off the western Mexico coast. It is found on the steep and rocky slopes of volcanic origin, in the foggy north-western side of the island.

The name of the genus Brahea is dedicated to the Danish astronomer Tycho Brahe (1546-1601). The name of the species edulis comes from the Latin “edo”, to eat and refers to the seeds, considered edible.

Brahea edulis has a solitary stem, up to 12 m tall and up to 40 cm broad, of dark grey colour, marked by vertical and horizontal fissures, the latter placed in correspondence of the fallen leaves. Under the top the stem is covered by the brown fibres present at the bases of the petioles that persist for a short time together with the withered leaves.

The foliage is up to 4 m broad and is formed by 20/30 circular leaves, divided per one third of their length and moderately costapalmate, very coriaceous, of dark or medium green colour. The leaves are up to 1 m long, carried by up to 1 m long yellow-green petioles with the borders armed by short thorns.

Brahea edulis is a monoecious species presenting inflorescences on two orders, up to 1,2 m long, shorter than the leaves and poorly visible through the foliage. The male and female flowers are yellow.

The spherical fruits are about 3,5 cm broad, of olive green colour turning black when ripe.

It propagates by seed that, if taken just ripe, takes 3 to 5 months to germinate, placed at 25 °C. After ripening the germination gets slower and it is necessary to soak the seeds in hot water for 24 hours in order to accelerate the germination. The seed produces a long taproot before the leaflets, then must be planted in deep pots or planted directly. The rate of growth of the seedlings is slow.

Brahea edulis is a palm very known in cultivation due its great adaptability to different climates and environments and for its robustness.

It vegetates well on all sorts of soils, even the poor ones in terms of nutrients, provided well-draining. Once settled in its final position it stands well the drought. It always requires an exposition in full sun and wilts if located in shady positions. Given the area of origin, it better bears the atmospheric humidity than its congener and equally well known Brahea armata and is very resistant to winds and the marine aerosol.

It can be cultivated in different climatic zones, from the tropics to the temperate zones where it can withstand frosts up to -7 °C, if kept in full sun. 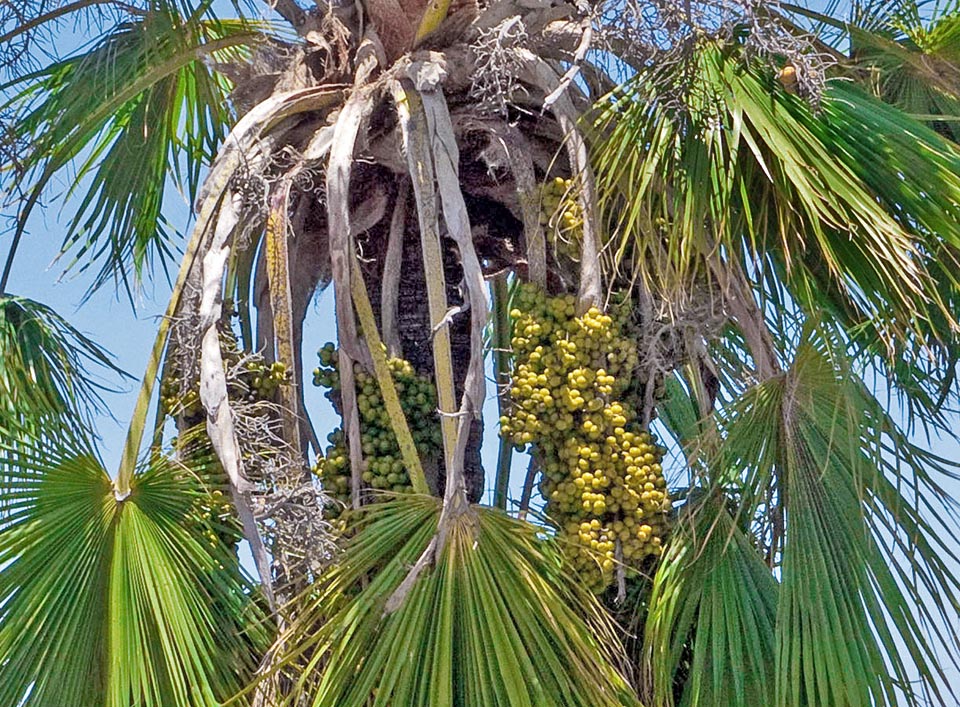 Endangered species, has a 4 m cyme with 20-30 circular leaves, divided per one third of length. The fruits are edible, and unluckily also the fresh apical bud © Alan Harper

This species can be transplanted quite easily also when adult, with several metres of stem. In such a case, even if the thick flesh roots break up and get dry during the transplant, the plant will issue new ones quickly. It is important to stabilize the specimen well by means of solid support posts and to  often give water, until the vegetative regrowth. Also, it helps the elimination of the leaves of the cyme, in order to decrease the transpiration after the transplant.

Brahea edulis is presently classified as “endangered” by the International Union for Conservation of Nature (IUCN), despite the big number of specimens cultivated all over the world, due to the decrease of the original population. By early 1800s the import of goats done by the settlers in the Guadalupe Island has had as consequence the difficulty of multiplication of this species due to the continuous collection during the years of the newly born young specimens. This phenomenon has concerned also all other arboreal species of the flora native to Guadalupe, such as the Guadalupe cypress (Cupressus guadelupensis), and has modified the originary environment of the island from the initially diffused forests to the present rocky hills. From late 1900 it started an eradication project of the wild goats, but this project ended only in 2005. Consequently, it is expected now that Brahea edulis as well as the other arboreal species of the island resume colonizing the abandoned areas.

The local population usually consumes the fruits of the palm fresh or utilizes them to make preserves. Also the apical young bud is consumed cooked as well as fresh in salad.