The species is native to Borneo, Java, Lesser Sunda Islands, Malaysia and Sumatra where it grows in the mountain forests on the trees or on the rocks mainly betyween the 500 and the 1500 m of altitude.

The name of the genus is the combination of the Greek sustantives “βρύον” (brýon) = moss and “βίος,” (bios) = life, of unclear reference ; the name of the species is the combination of the Greek substantive “ὑάκινθος” (hyacinthos) = and of the suffix “-οειδής” (-oeidés), from “εἶδος“ (êidos) = shape, look, with reference to the look of the inflorescence similar to that of the Hyacinth (Hyacinthus orientalis L., 1753).

The Bryobium hyacinthoides (Blume) Y.P.Ng & P.J.Cribb (2005) is an epiphytic or lithophytic species with close oblong pseudobulbs, slightly laterally compressed, 6-10 cm long, with at the apex 2, rarely 3, lanceolate leaves thinned at the base, 10-20 cm long and 3-4 cm broad, coriaceous. Lateral racemose inflorescences, 1-2 per pseudobulb, 15-20 cm long, erect, bearing 15-40 white flowers, translucid, of about 1,5 cm of diametre. Pubescent sepals, the dorsal lanceolate about 0,8 cm long and 0,3 cm broad, the lateral ones ovate with pointed apex, 0,8 cm long and 0,5 cm broad, merged at the base of the column to form a short spur (mentum), ovate glabrous petals, about 0,7 cm long and 0,3 cm broad, trilobed labellum about 0,8 cm long with falcate lateral lobes, erect, suffused of violet purple, and median lobe ovate with obtuse apex, about 0,3 cm broad, fleshy, run at the base by two low lamellae. The flowers, lasting 1-2 weeks, emit a fairly unpleasant smell. It reproduces by seed, in vitro, and division, to be done by the vegetative restart, with each section provided of at least 3-4 pseudobulbs. 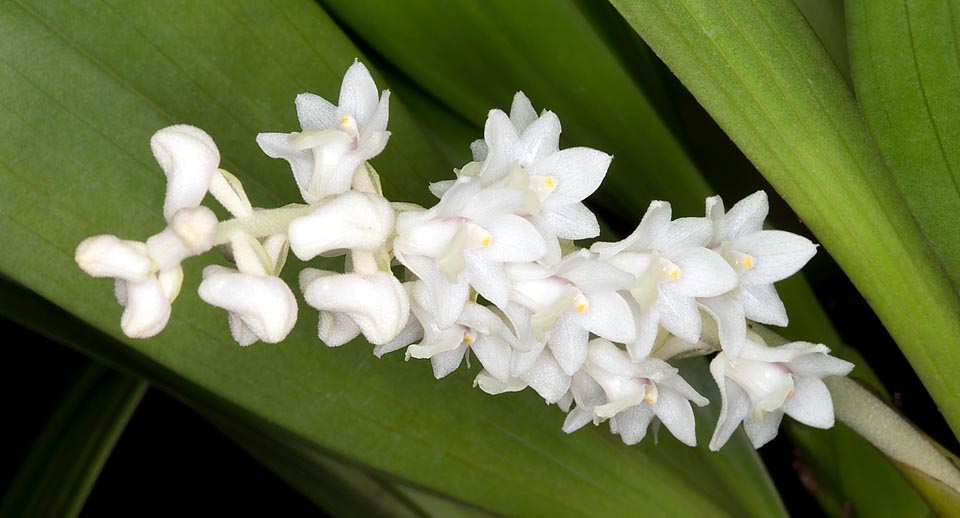 Species of easy cultivation that quickly tufts, requires a slightly shaded position, medium-high temperatures in summer, 25-32 °C, lower in winter, with night values not under the 12 °C, high humidity, 65-85%, and constant ventilation. Regular waterings during the growth of the pseudobulbs, but allowing to dry up before watering again and avoiding stagnations between the thick pseudobulbs that may cause rottenness, more reduced in winter until the beginning of the blooming, but without letting the substratum completely dry for more than 2-3 weeks during the whole period, to allow a slight rest, even if not strictly necessary, in order to favour the emission of the floral stems. For waterings to utilize rainwater, demineralized or by reverse osmosis and to fertilize, during the growth period, with hydrosoluble products, with microelements, at half of the dosage suggested by the producer. It can be mounted on bark or cork raft, but usually is cultivated in pot with a compound formed by bark fragments or coir and charcoal with addition of inerts, such as polystyrene or agriperlite in order to improve the drainage. The repottings are to be done by the vegetative restart only when strictly necessary, as it does not love to be disturbed.