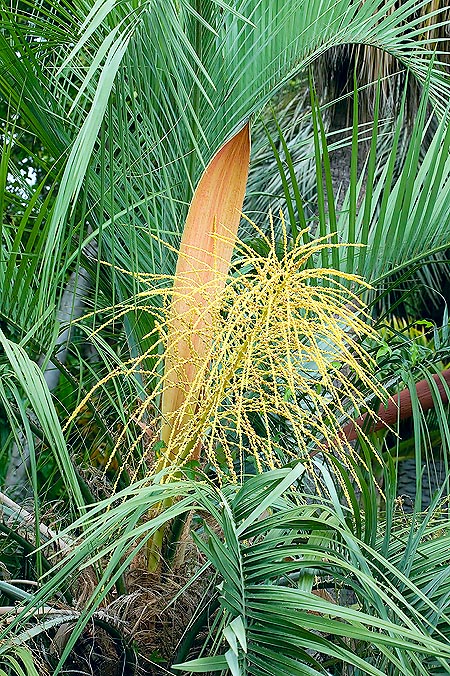 Short and ramified inflorescence with edible fruits. Resists up to -6 °C © Mazza

The Butia paraguayensis (Barb. Rodr.) L. H. Bailey (1936) is native to Brazil, Paraguay, Uruguay and north eastern Argentina, where it grows mainly in the savanas in poor and sandy soils, and the climate is characterised by marked seasons, with rainy summers and dry winters (from May to October).

The name of the genus comes from the Portuguese diction of the native name, meaning “thorny”, “dentate”, referring to the thorns present on the petioles; the name of the species refers to one of its countries of origin.

It is known as “butià-do-cerrado” in Brazil, “yatai enano” in Argentina, “yatai” in Paraguay, and “dwarf yatay palm” in the English-speaking countries.

It is a very variable plant in the wild; the trunk, solitary, is generally subterranean or very short, but it can reach the 3-4 m in particularly propitious conditions (as also when cultivated), and a diameter varying from 10 to 20 cm, covered by the residues of
the foliar petioles. Pinnate leaves, long at the most, up to about 2,5 metres, greatly and elegantly bent, with rigid leaflets of a blue-green colour, regularly disposed on the rachis, forming a V; the petiole is thorny on the margins.

Monoecious plant, it produces a short, much ramified inflorescence; the fruits are ovoid, long about 2-4 cm, of yellowish colour when ripe, with edible pulp. The seeds germinate in 3-4 months.

Palm still not much diffused, in spite of its ornamental characteristics, is cultivable, successfully, particularly in the Mediterranean climate countries, adapting in fact to poor and droughty soils, provided well drained, and has a fairly good resistance to low temperatures (up to -6° C). When cultivated in full sun, it assumes a more compact form and a deeper colouring of the foliage.