The species is native to north-eastern Argentina (Corrientes, Entre Rios and Santa Fe), southern Brazil (Rio Grande do Sul) and Uruguay where it often forms extensive colonies in the prairies (pampas) on mainly sandy soils, acidic to slightly alkaline, up to about 500 m of altitude.

The generic term comes from the Portuguese diction of the vernacular Brazilian of a palm meaning “spiny”, “toothed”, with reference to the spines present on the petioles; the specific name is the one utilized by the local populations for indicating various species of palms.

The Butia yatay (Mart.) Becc. (1916) is a very variable monoecious species with solitary stem, erect, up to 10-12 m tall, with secular specimens that in nature reach the 16-18 m, and diameter of 30-50 cm enlarged at the base, of greyish colour and covered by the persistent bases of the old leaves, except, possibly, in the oldest parts. Top with pinnate leaves stringly and elegantly arcuate, imbricate, 1,6-2,5 m long, with rigid leaflets, linear with acute apex, arranged regularly along the rachis and facing upwards to form a V; petiole 0,6-0,7 m long with margins provided of scattered spines about 3 cm long at the base, decreasing towards the apex. The leaflets are in the median part 70-80 cm long and 2-2,4 cm broad, of bluish grey colour.

The inflorescences generate between the leaves (interfoliar) on a 0,7-0,8 m long peduncle, about 0,8 m long, with ramifications of the first order, initially protected by two woody oblong-lanceolate acuminate spathes, about 1,2 m long, externally smooth or streaked of glaucous colour. 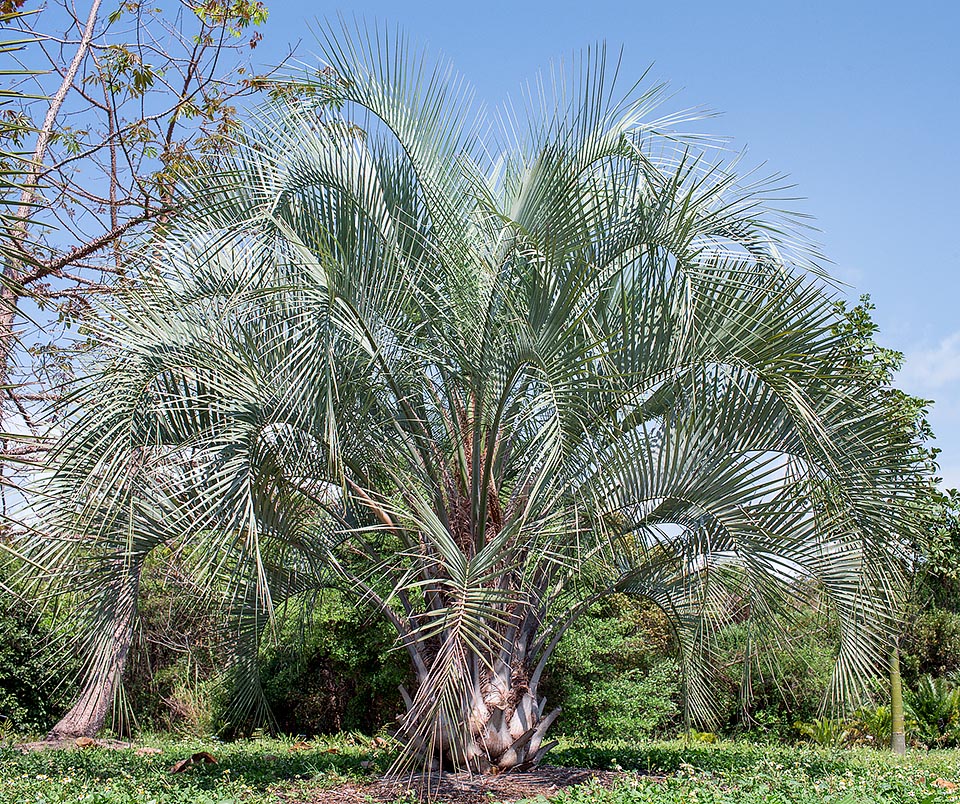 Up to 18 m tall, Butia yatay of Argentina, Brazil and Uruguay is the highest species of the genus. Is not particular about the soil and would deserve a better horticultural diffusion seen that it may bear sporadically even the -8 °C. The fruits, although less valued than those of the B. odorata and B. eriospatha, are locally consumed © G. Mazza

Yellow unisexual flowers arranged in triad (one female flower between two male ones), excepting in the terminal part where are present only male flowers, the female ones are 1-1,6 cm long with a diameter of 0,6-1 cm, the biggest ones in the whole genus; the inflorescence presents the phenomenon of the proterandry (the male flowers ripe before the female ones) that favours the crossed fecundation. The fruits, also the biggest in the genus, are ovoidal drupes of yellow or orange yellow colour when ripe with prominent pointed apex, 3,5-4,8 cm long and of 2,2-2,8 cm of diameter, with woody, hard and ovoidal endocarp with a sort of “beak” at the apex, 2,2-3 cm long and of 0,8-1,3 cm of diameter, containing 1-3 oily seeds.

It reproduces by seed in draining loam maintained constantly humid at the temperature of 25-28 °C, with variable germination times, from 3 months to more than one year; the growth, particularly during the juvenile phase, is slow.

The most imposing among the Butia, but rare in cultivation, it would deserve a greater diffusion due to the remarkable ornamental, landscape characteristics and the adaptability to different climate conditions, from the tropical to the warm temperate, even humid, where when adult may resist to temperatures, if exceptional and short lasting, up to about -8 °C, some degree less if dry. It requires full sun and is not particular about the soil, acidic to slightly alkaline, provided draining, even if it prefers the sandy, deep, rich of organic substance ones. Well rooted it resists to dry periods, but grows faster if periodically irrigated in the climates characterized by long warm and dry summers.

In the origin sites the fruits, even if considered of quality lower than those of the Butia odorata and Butia eriospatha, are consumed fresh or utilized for preparing jams, juices and alcoholic drinks, they are also an important resource for the local fauna. The leaves, rich of resistent fibres, are used for making various artistic and of common use handicrafts. The oil of the seeds finally has good characteristics for its employment as biofuel.