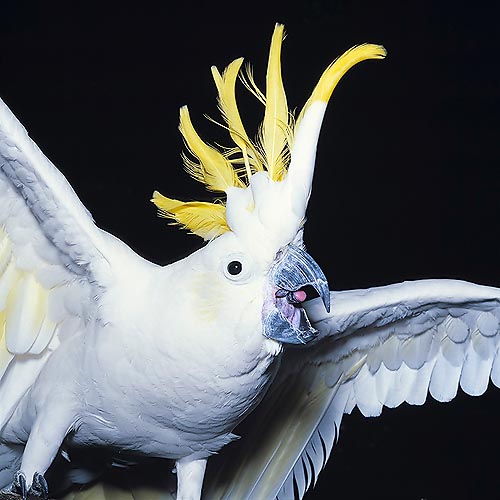 Even a layman would recognize at first sight, among the various species of Psittaciformes, the members of the family of the Cacatuidae due to the original erectile crest, which the raise or lower voluntarily depending on their emotional condition. It has a size which varies from species to species, and it is typical only of these birds.

In the common vision, the cockatoo is seen as the white bird (for instance, the Cacatua alba, called White cockatoo, of the Maluku Islands), but many species are not so, for instance the Black cockatoos, and other two species have a plumage rich of pink nuances.

This is the case of the Roseate cockatoo, or Galah (Eolophus roseicapillus, by other biologists called Cacatua roseicapillus), with the morphological and ethological characteristics so much particular that some biologists think it is more correct to classify it in the genus Eolophus, separate from the genus Cacatua. And also the Major Mitchell’s cockatoo (Cacatua leadbeateri leadbeateri) is pink, in correspondence with the belly, with the crest spotted by a showy orange band, which makes it considered as one of the most beautiful species.

In the specific of this text, the Yellow crested cockatoo or Greater sulphur-crested cockatoo, or Galerita (Cacatua galerita galerita or Kakatoe galerita galerita Latham, 1790), not to be mistaken with the Citron-crested cockatoo (Cacatua sulphurea citrinocristata), is on one hand considered as a pest by the Australian farmers, as it ravages the crops of corn, maize, sorghum and other agricultural produces, and on the other hand, is highly sought, for collections, by zoological gardens, aquatic parks and the privates. For this reason, rightly, the CITES is increasingly precluding their trade, seen that they are much complex and delicate, and only a professional (and not even always), is able to breed well and get them reproducing in an artificial environment.

Fourteen species are known in the genus Cacatua, they are not always easily distinguishable, if not in virtue of their biotope and the geographic area. The subspecies Cacatua galerita galerita, lives in Australia in stable populations. Other three subspecies live in other areas of Oceania. Usually the big cockatoos, such as the Galerita, are animals difficult to breed. Keeping them at home is not like having a pair of lovebirds or of finches. They are animals which badly adapt to the apartment life, and therefore are not suitable as companion birds. Their loud singing, the tendency to destroy everything which comes within reach of their great and strong beak, early leads the unwary buyers to give them away, or to close them permanently in cage, maybe outdoors, on the balcony, where they quickly decline until death.

There are various biotopes inhabited by the stable populations of Cacatua galerita galerita in the Australian continent. Those living in the zones of the northern part of Australia have more arboreal tendencies, live and reproduce in the woody areas, hilly and mountain forests, but it is not rare to see members of these populations getting a terrestrial behaviour, moving on the earth, close inhabited zones, where they smartly go to collect food wastes. The populations living in the south-eastern zones prefer to live in the savannahs, prairies and bush and, all of them, show an evident terrestrial adaptation. 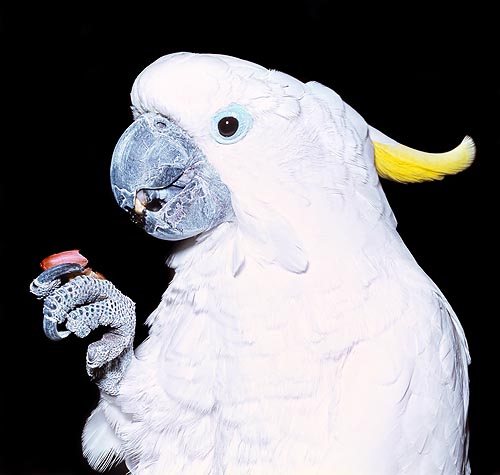 The dimensions are remarkable: both males and females reach the length of 50-55 cm and may live up to 65-70 years.

The body is strong, completely white (the primary coverts as well as the secondary are white, as well as the remiges of the wings), the tail is ample and heart-shaped, but not too long, and has slightly yellow lower rectrices.

The beak, entirely black in both sexes, is big and robust, so much to break the shell, notoriously very hard, of the Brazil nuts. They have solid legs, zygodactyl foot and the fingers have quite robust nails. The iris is dark brown. The crest is ample, yellow with serrated feathers. It opens and closes quickly on command, when they are upset of, anyway, excited, and it is maybe possible to distinguish in these openings and closings a code of communication between conspecifics of both sexes.

The Cacatua galerita galerita, must keep the big beak constantly moving. For this reason, in captivity, like what happens in the wild, we have to furnish it a trunk from which to remove the bark, and add other objects where it may release its energetic surplus. So much so that the breeders must often utilize bowls for food and water made in earthen ware, in order to avoid that they break them with their beak.

They are granivorous as well as frugivorous. They love to beak the food, are greedy of wild onions bulbs and do not disdain the coleopterans larvae. In artificial habitat, the diet needs a greater input of vegetables than in the wild: for instance, cores of cabbage, cauliflower or peppers. And, furthermore, it is good to furnish nuts, hazelnuts, almonds, Brazilian nuts, pine nuts and peanuts. We have to say that, due to their ludic way of eating, most of this food will end into the litter of the cage, which will have to be often cleaned up.

When describing previously the livery, and also the fact that the iris in both sexes is dark brown, we understand that there are no characters of sexual dimorphism, neither stable, nor seasonal-transitory, and for this reason the determination of the sex happens either by means of the sexing by DNA of the covert feathers or by laparoscopy.

In the wild and also in captivity a series of problems arises as soon as the formation of the pairs takes place. Often the male attacks the chosen female, if this one is not yet ready for the mating; this applies for the Cacatua galerita galerita, as well as for the Cacatua sulphurea, the Cacatua ducorpsii and the Cacatua leadbeateri. The sudden attacks may be even lethal and at times have, as consequence, the breakage of the upper part of the beak of the female. The phenomenon may happen for the newly formed pairs and also in the “close-knit” ones.

However, unlike most of the Psittaciformes, the male of Cacatua galerita galerita, collaborates with the female in the hatching of the eggs, usually during the day. The brood counts 2 to 4 eggs, incubated for about 28 days. The chicks remain in the nest for 10-11, at times 12, weeks. The chicks of galerita, like other species of cockatoo, grow up slowly. When forty-seven days old, even if weighing 450-455 gm, often they have not yet put on all the feathers.

Usually, during the hatching, the mother needs a great quantity of animal proteins for recovering the right constitution. The CITES does not forbid their trade, even if the purchase of the animal must be declared, if it will be bred by a private.