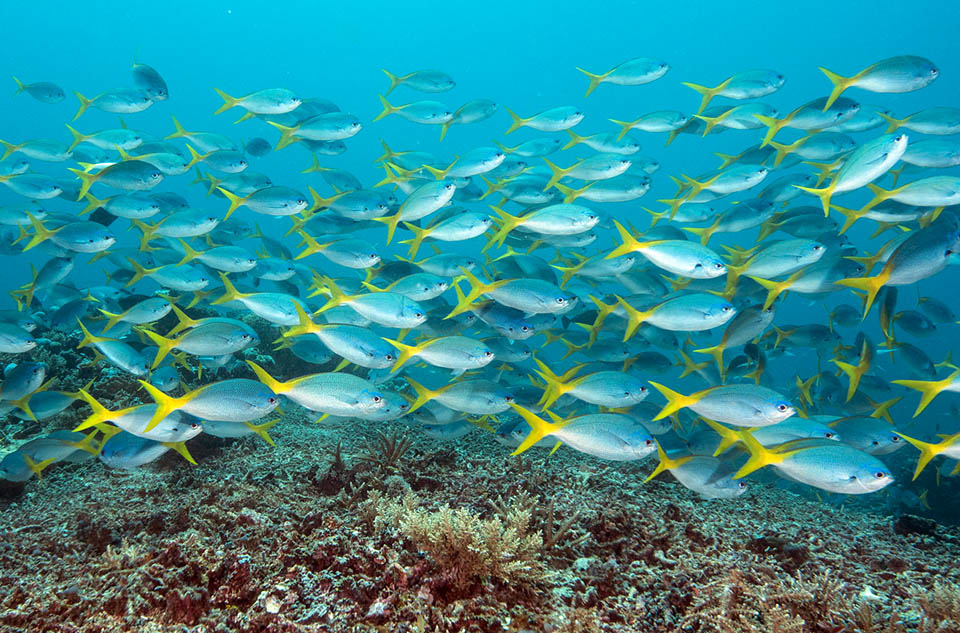 Amazing school of Caesio cuning. This pelagic species is frequent in western Pacific and strays in the Indian Ocean reaching Sri Lanka and the Maldives © Jeremy Smith

Caesio cuning (Bloch 1791), commonly known as Yellowtail fusilier or Red-bellied fusilier, belongs to the order of the Actinopterygii, the ray-finned fishes, to the order of the Perciformes and to the family of the Caesionidae, the so-called “fusilier fishes”, due to their long and lathed like a bullet body. A small family, present in the brackish waters at the mouths of the rivers, counting 4 genera and about 23 species.

They are tireless swimmers living in schools, related to the Lutjanidae, but with a much smaller mouth because they exclusively nourish of zooplankton.

The generic name Caesio comes from the Latin “caesius”, grey-blue, adjective usd by the Romans due to the bright glitter of the light-blue eyes and of the silver, whilst the specific epithet cuning comes from the name “Ikan (= fish) Tembra Cuning”, under which it was called in Indonesia. 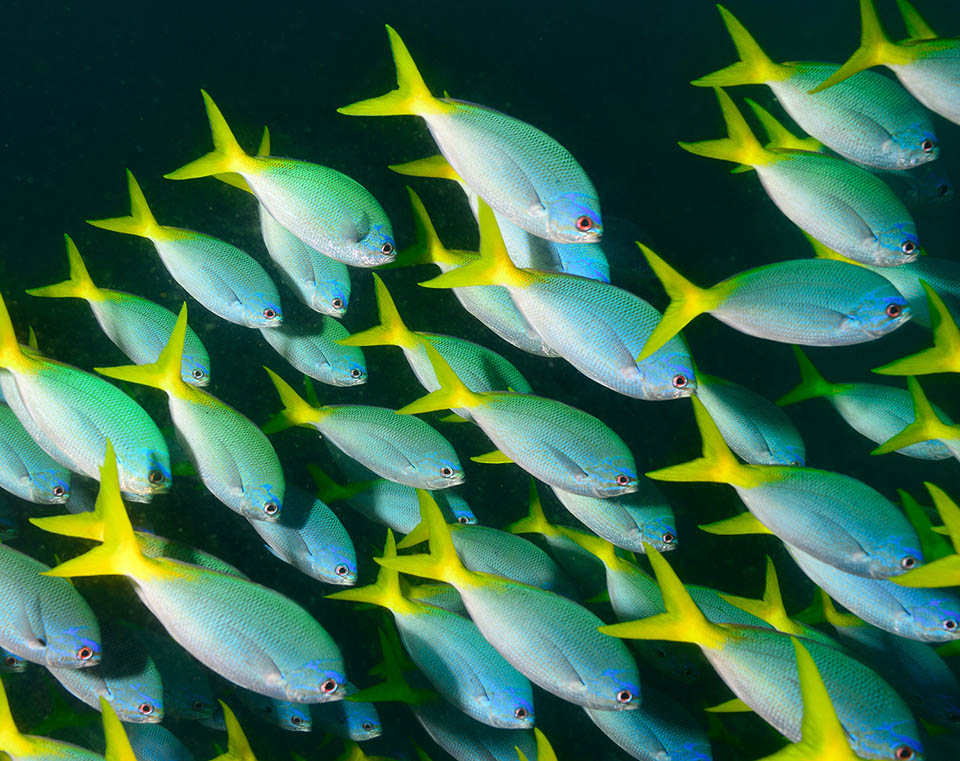 Very similar to Caesio teres distinguishes for the higher body and less wide yellow, present only on the ending part of the back, peduncle and caudal fin © Carlos Faria

Caesio cuning is mainly a species of western Pacific, straying on the Indian Ocean, reaching Sri Lanka and Maldives. To the North-East it reaches China and Japan; eastwards it has colonized Micronesia, reaching, south, New Caledonia.

The Yellowtail fusilier goes swimming, usually not far from the madreporic formations, in numerous schools between 1 and 50 m of depth, but it can be found also in murky waters with slimy bottom.

Frequent in the lagoons, it often concentrates along the entry and exit tidal channels, where the current, rich of zooplankton, transports the organisms of various kinds composing its diet: usually copepods and cladocerans, but quite often also eggs and larvae of several inhabitants of the reef. 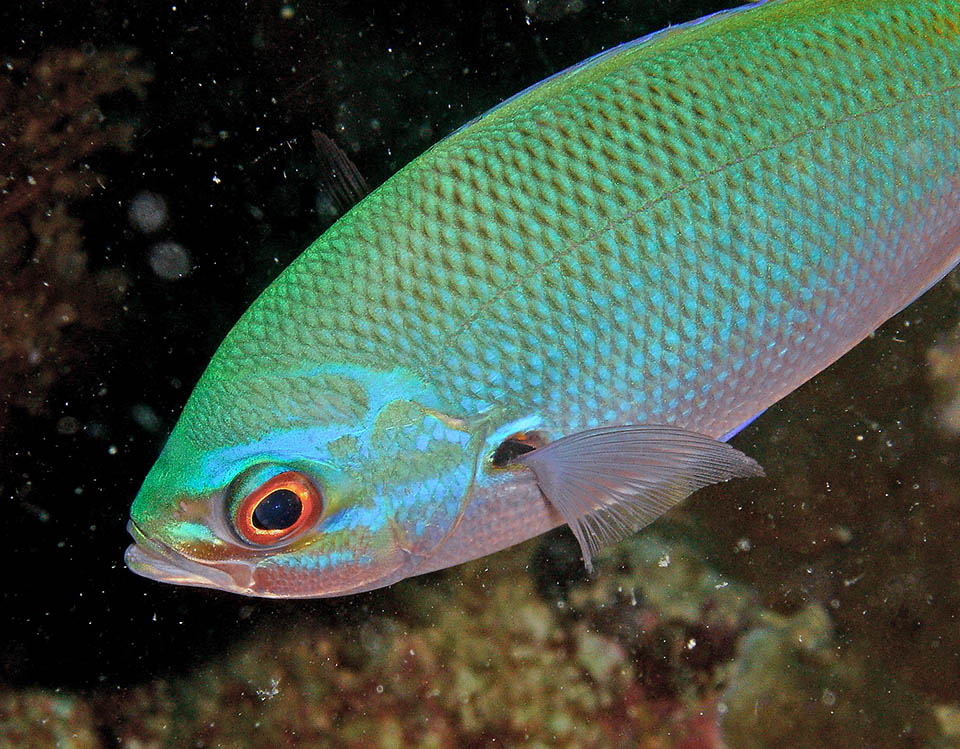 The small and oblique mouth is protrusible to catch rapidly the zooplankton. Belly tends often to pinkish and the centre of scales is clearer than the margins © Carlos Faria

Proportionally, Caesio cuning has a much higher body than the analogous Caesio teres and for many characters is considered as the most ancestral among the Caesionidae. Not wrongly, it has been called also Giant fusilier, because, even if the catch measures about 35 cm, it can reach the length of 60 cm.

The small and oblique mouth, with central and minute teeth present on the jaws and on the palate, is protrusible, consequently able to project ahead for catching rapidly the food.

The pelvic fins have one spiny ray and 5 softs; the pectoral ones 17-20 unarmed rays, and the caudal is biforked, as usually occurs in the fishes that go swimming ceaselessly. 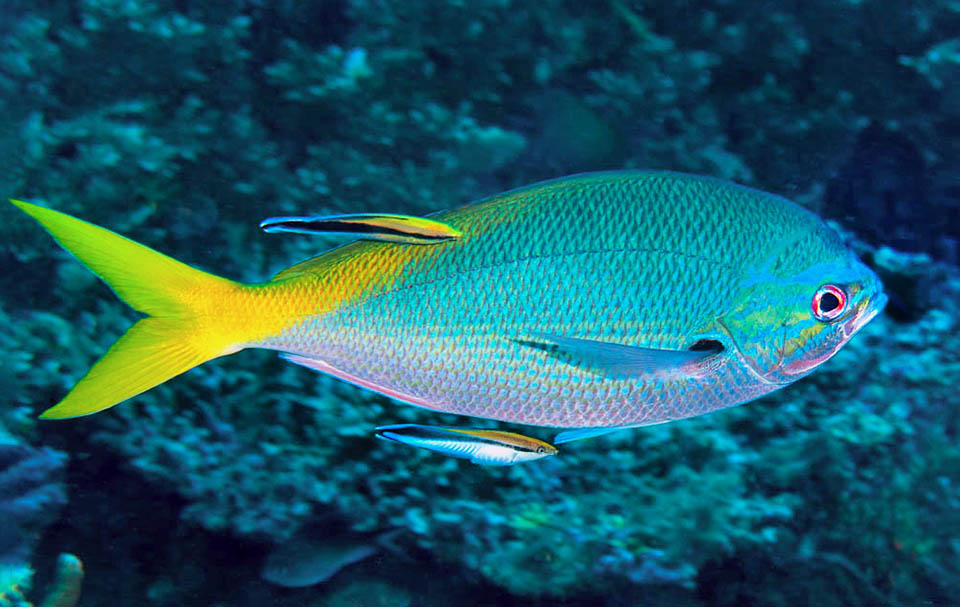 60 cm long, it’s the biggest fusilier fish. Here a big specimen with two cleaners that free it from the parasites © François Libert

The livery of Caesio cuning is yellow and blue, like in Caesio teres, but the yellow is less extensive. Also in the young is present only on the final part of the dorsal fin, the adjacent zone of the back, peduncle and caudal fin, that does not present the apical black spots of Pterocaesio chrysozona or the dark traits, scissor-shaped, of Caesio caerulaurea.

Where the distribution areas do overlap, it is not rare to get the forming of schools mixed with other Caesionidae, “black sheep” that got lost transported by the frenzy of the meal.

After the fecundation, countless floating, thanks to one droplet of oil, eggs, are entrusted to the currents. 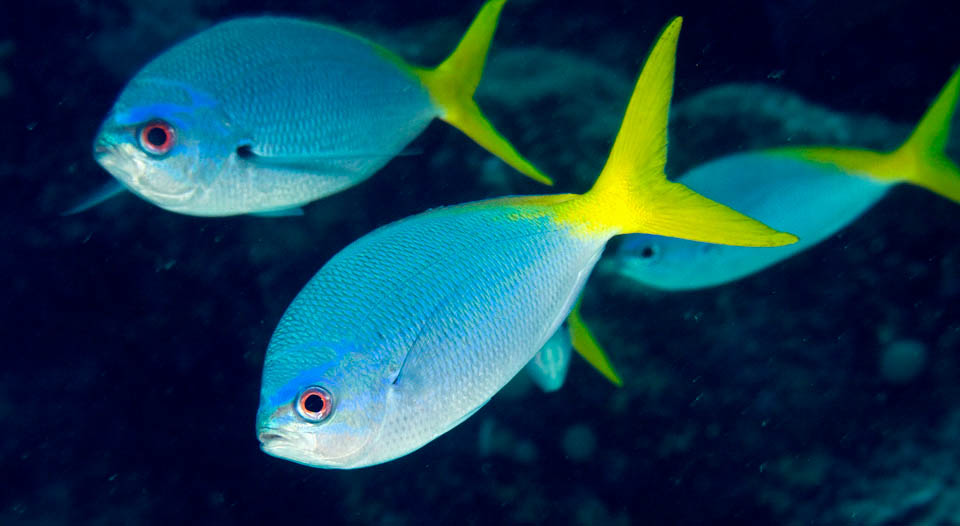 Despite the appealing livery it is not an aquarium fish due to the size and the need of big spaces for swimming. Locally is much caught for the human feeding © Paddy Ryan

Due to its marked mobility, the Yellowtail fusilier is not a species required by the aquarists: at most it may be hosted in large cylindrical pools to swim round and round in public aquaria but seen the size it’s a very caught fish locally for human feeding with various kinds of nets and ingenious traps.

It is not, however, an endangered species, considering the vast distribution area and the discreet resilience, with a possible doubling of the populations in 1,4-4,4 years (2021).

Consequently, the vulnerability index is presently moderate, marking 35 on a scale of 100.