The Brazilian caiman (Caiman latirostris Daudin, 1801) is a reptilian afferent to the order of the Crocodilians (Crocodylia), family Crocodylids (Crocodylidae), subfamily … and here the debate stands open, some biologists insert it in the subfamily of the Alligatorines (Alligatorinae), whilst other authors place it in that of the Caimanines (Caimaninae) … genus Caiman (Caiman).

It is also called in English Broad-snouted caiman, in Italian, Caimano brasiliano, in Spanish as Yacaré de Hocico Ancho and in Portuguese as Jacaré de Hocico.

Although most of the taxonomical biologists do not accept officially the existence of subspecies, some biologists of South American formation have introduced this subdivision, inserting a subspecies, the Caiman latirostris chacoensis.

The existence of osteoderms present in the skin of such reptilians has not been a deterrent against the rather intense hunting to which they have been submitted especially during the first half of the last century. As a matter of fact, independently from these bony structures, the skin is tanned quite well for being utilized in the modist industry; their indiscriminate killing led them to a strong rarefaction. Nowadays, luckily, this activity is numerically limited and in well defined periods of the year, following the guidelines established by the biologists of the various South American state bodies, which take into account the indexes and the reproductive cycles and the demographic density of this loricate. The population has returned to acceptable levels, but, for various factors, they have never to ease the attention and the controls.

In fact, illegal hunting continues, which, however, is increasingly hampered by the incredible ability of the Brazilian caiman in hiding in wild areas, hardly accessible, even for the most experienced hunters, with consequent high costs. This reflects on a significant price increase of the skins, and so the traders end up in preferring the legally killed animals. The local human populations of the various South American countries where this animal lives, still consume their meat and utilize their skins, but, as always happens, although instinctively, their hunting is ecological, and fetches only what is strictly necessary. 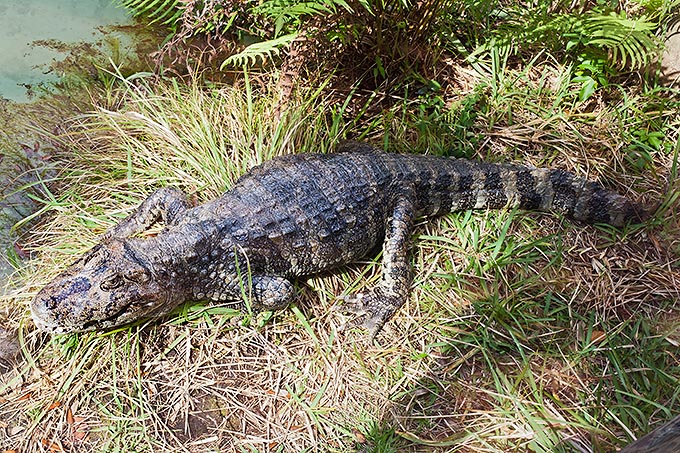 Actually, the real problems the Brazilian caimans face nowadays for surviving, are quite of other nature, but are equally attributable to the human being. The mining exploitation of several areas of the Amazon Rainforest and of other South American forest lands, the intensive deforestation for getting lands for agricultural use (mostly monocultural), the hydrogeological change induced by the construction of dams for the production of hydroelectric power, dangerously beset the biotopes where they live, with negative repercussions on their demographic density.

For the time being, the CITES inserts them into the appendix I (except in Argentina, where they are confined in the appendix II), whilst the IUCN still classifies them at low risk of extinction. Biologists estimate the present population between the 250.000 and the 500.000 units. Nowadays, repopulation programmes encourage the couplings inside the healthiest wild nuclei, whilst breeding programmes, in various zoological gardens, are active in various parts of the world.

They are located in northern Argentina, in south-eastern Brazil, in Bolivia, Paraguay and Uruguay.

The Brazilian caiman is an electively aquatic species, which has found a home, over the years, mainly in the mangrove formations in the humid zones, such as lagoons and swamps (both freshwater and brackish), all over its serial ecological distribution. They may be found also in small areas subject to tidal phenomena, along the Atlantic coast, and they are not rare in the mangrove areas surrounding the small coastal islands of south-eastern Brazil. 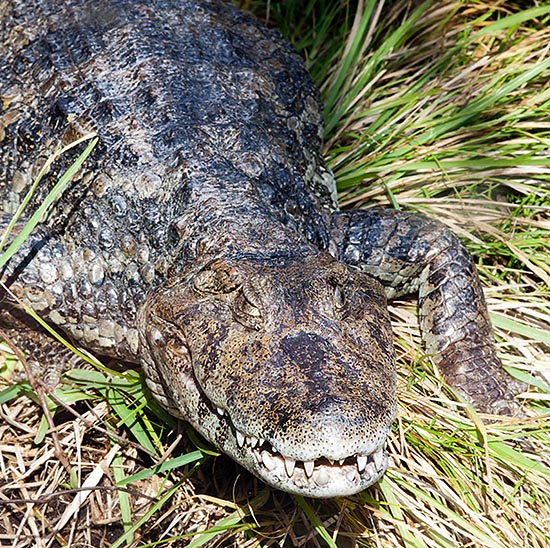 It's hunted for the skin, in spite of the dorsal bony plates © Giuseppe Mazza

The series of the Caiman latirostris can overlap, in some geographic areas, to that of another species, the Caiman yacare, but inside these areas the biotope preferences of the two species differ slightly, and avoid the competition; the Brazilian caiman has the tendency, in fact, to prefer the slower water streams passing through thick forests.

Furthermore, the Brazilian caiman seems to do well in captivity, in the ponds designed by the biologists, by following precise ecological criteria. This reptilian has been even able to adapt to the water surfaces utilized for watering the bovine cattle, present in the farms close to the forest.

The Caiman latirostris as well as the Caiman yacare resist well to fairly low temperatures, seen that we find them also at 600 m of altitude above sea level. In these cases we find an odd a adaptation due to the phenotypic plasticity of the species: in the specimens living in the cold, the livery is in fact darker, in some instances even black, in order to ensure a better absorption of the sunlight and therefore of the heat; in other words, an element of thermoregulation. It is not a genetic mutation, but it is matter of forms of eco-phenotypic adaptation.

The biologists classify it as a medium-sized crocodile. Their known maximum length is of 3,5 m when in captivity, but in the wild the males usually do not much exceed the 2 m and the females even do not reach this size.

As it is implied by its English name, Broad-snouted, these crocodiles have a broad snout, on the other hand, “latirostris” in Latin means well this, with a snout or a nose broad. The back is robustly ossified with osteoderms. The livery is usually of a pale olivaster green colour, but the black specimens described before; furthermore, some biologists tell us that some darker spots may be present, but not always apparent, on the jaws, as is the case for the Caiman yacare. The number of teeth varies from 68 to 78, as an average, they are 71. They subdivide in 5 premaxillary, 12-14 maxillary and 17-20 mandibular ones.

The Brazilian caimans nourish of freshwater gastropod molluscs (in particular, of species afferent to the family of the Ampullaridae), but also of other aquatic invertebrates, such as crustaceans, insects and also of various types of vertebrates, such as fishes and amphibians. 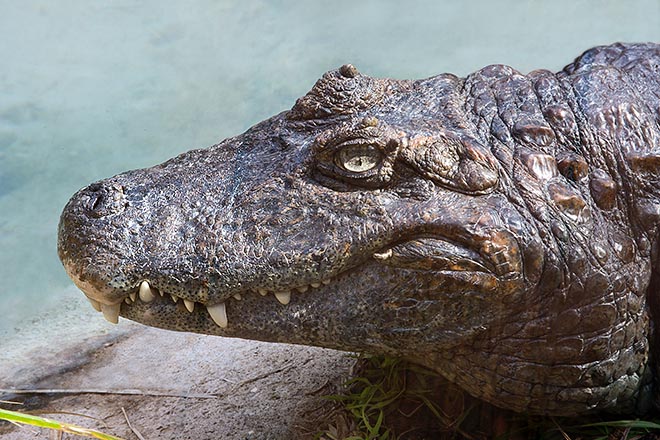 Aquatic snails are its main course, but with its teeth it can break even the turtles carapace © Mazza

Seen their dentition and their remarkable mandibular strength, the adult individuals may kill also bigger preys.

They easily break up the carapace of the aquatic turtles, and the biggest specimens do not disdain the aquatic birds, like the spoonbills, the redshanks, etc.

The encounter and clash are not uncommon between this caiman and the giant of the South American constrictors, the Green anaconda (Eunectes murinus), second in size only to the Reticulated python (Python reticulatus), which, at times, is capable to overwhelm it.

The incidence of liver or biliary diseases, with fatal course, on bovines and ovines, have been, by the zoological biologists, associated over the time between the various species of caimans and these ungulates, for two basic reasons: as briefly mentioned before, the Brazilian caiman, like other species of caimans, nourishes also of freshwater molluscs, such as those afferent to the family of the Ampullaridae, and these molluscs are often vectors of parasitic worms, like those afferent to the class of the Trematodes (Trematoda), phylum Plathelminthes (Platyhelminthes). A typical example is the Fasciola hepatica , called in English, common liver fluke, or sheep liver fluke, pathogenic organism for the mammals, man included. In the mollusc, these parasites live under form of “rediae”, which are ingested by the caiman along with the mollusc. When in the bowel of the reptilian, the parasite develops in an asymptomatic way its vital cycle, and then is released with the faeces under form of “encysted metacercaria”.

When this vital stage is reached, it may anchor, by means of special hooks, on the aquatic plants or on the grasses growing near the ponds, where the livestock goes to graze or drink. The encysted metacercariae, swallowed with the grass or through the water (which is the case of the human being), have as primary host bovines, buffaloes, sheep, goats or the man. Reached the duodenum, with the bolus, they reach, by means of the blood circulation, the liver and fix in the biliary tract, where they declare their presence with the disease, which may vary from a slight functional impairment of the liver, to a real hepatic cirrhosis, which, if in the man, can be concluded with a liver transplant, but in the animals will mean death. 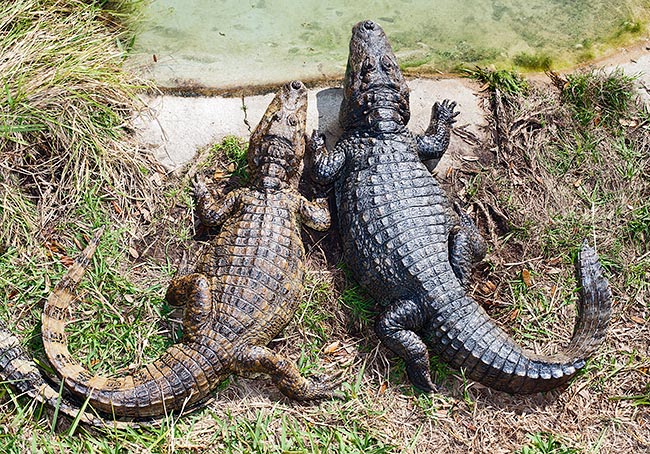 Therefore, the presence of Brazilian caimans or of other species, may increase, through the encysted metacercariae released with the faeces, the rate of infestations; on the contrary, a reduction in the density of population of the Brazilian caimans, as well as of other species, causes then a significant increase of these freshwater molluscs, vectors of the dangerous trematodes, which may be, among other things, eaten by the man.

From studies carried out in zoological gardens as well as in the wild, the biologists have been able to study in deep the reproductive behaviour of the Brazilian caiman. It has been observed that, probably, it is the male who builds the nest, a structure which is buried, once the eggs are laid, and that usually the nests are built in areas sufficiently distant from the river banks, thus to avoid the water of the floods. The female can lay from 20 to 60 white eggs, even if they have found nests containing up to 130 eggs; it is not yet clear if these so high values are due to the deposition of only one female, or, very rare instance in the class of the Reptilians (Reptilia), they may be due to phenomena of parasitic deposition, where females of the same species can take advantage of the nest of another couple.

The building of the nest and the oviposition, take place usually by the rainy season, even if, in relation with the latitude, in the northernmost areas, these procedures can be advance in time. It appears that the nest is guarded by the male, and that the eggs are deposited in two layers; this might create a thermal gradient, which is the main factor regulating the relationship between the sexes (sex ratio) in the progeny of this species.

Like other crocodiles, and generally, the reptilians, also in the Caiman latirostris there is not, in fact, a pair of sexual chromosomes. It is therefore the temperature to set the sex of the unborns. Warmer temperatures r temperate ones favour the birth of females; lower or cool temperatures the birth of the males. The difference of 1 °C is sufficient to regulate the sex ratio: at 32 °C mainly females come to life, by 31 °C the males.