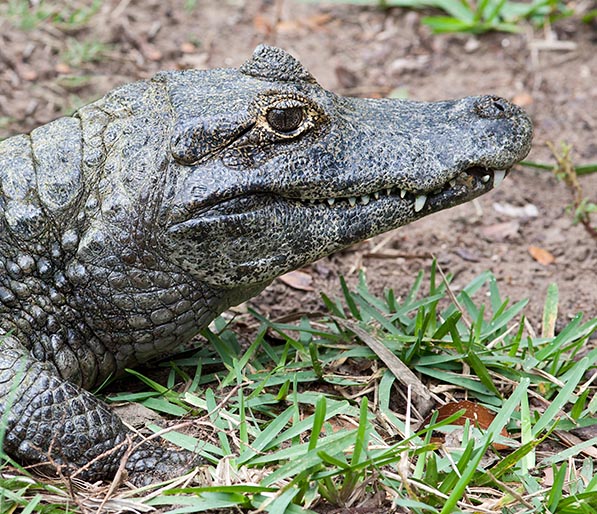 The lemma “caiman” is of Spanish origin and indicates the alligator or whatsoever crocodile, whilst the term “yacare” refers to Yacaré or Jacaré, a term with which the local populations do call the alligator.

Until the fifties of the last century, the Caiman yacare was identified as a subspecies of the well known Spectacled caiman (Caiman crocodilus), and for this it was named Caiman crocodilus yacare, but the taxonomical biologists of the Inetrnational Commission for Zoological Nomenclature (ICZN) have then determined the correct and present nature of full species. The CITES inserts this species into the appendix II, whilst the IUCN considers it as LRIc (low risk), that is species at low risk of extinction. The biologists estimate presently a population of about 100.000-200.000 units.

Like the Caiman latirostris (see relevant text), also the Caiman yacare has been object, and still is, of pressures of hunting and environment nature, which have put its survival in serious danger, even if at least the poaching has now decreased from the recent past. The environmental changes induced by anthropic phenomena have, on the contrary, more and more increased over the time, becoming the first cause of danger, as we shall explain hereunder.

However, by the way, the species is nowadays protected by various South American governments, and this at least has contributed in keeping constant its population. Thanks to this, they still have a wide distribution, which overlaps, n some biotopes, also with the ecologic series of the Caiman latirostris and in drought periods there may happen even the formation of high density nuclei. 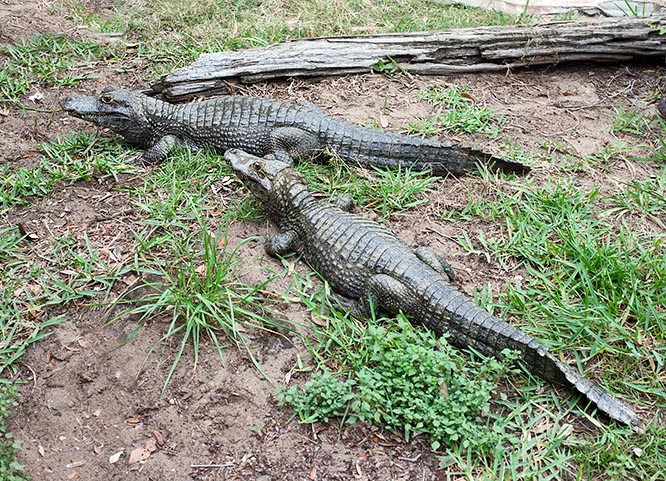 It may be 2,5 m long and eats mainly aquatic snails and piranhas © Giuseppe Mazza

It is endemic to northern Argentina, southern Brazil, southern Bolivia and Paraguay.

This reptilian is a typical denizen of the wetlands, both freshwater and saltwater marshes, as well as with reed beds or lagoons. In respect of the Caiman latirostris, it prefers lentic aquatic habitats.

Biologists belonging to various South American universities and to the IUCN, have performed studies of population on this reptilian in the Pantanal, the largest wetland in the world (located for the most part in Brazil and, partly, in Paraguay and Bolivia), where this animal is at home.

The baffling data originating from such studies, tell us that until the seventies of the last century, inside this immense alluvial valley, there were almost 10 million of Paraguayan caimans, whilst nowadays they have almost disappeared. This vertical reduction in the population density was to be blamed, as we have mentioned before, to the massive poaching, to which these animals were subjected for commercializing their skins, utilized in the fashion industry, but also, and especially, nowadays, to a constant reclaiming of the wetlands for obtaining lands for the agriculture and for the production of hydropower. A natural obstacle to the poaching have always been the spontaneous crossings which happen between the Caiman yacare and the Caiman crocodilus, from which come to life animals with a less interesting skin for the commercial purposes.

Farms for breeding the Caiman yacare, are more and more frequent in Brazil, Bolivia, Paraguay and Argentina, for repopulating the natural areas, presently lacking of them, as well as for commercial purposes, thus avoiding affecting the stocks in the wild. Repopulation and environmental education programmes, activated by South American biologists, aim to empower the local populations to the preservation of these reptilians and of the countless natural habitats where they do live. 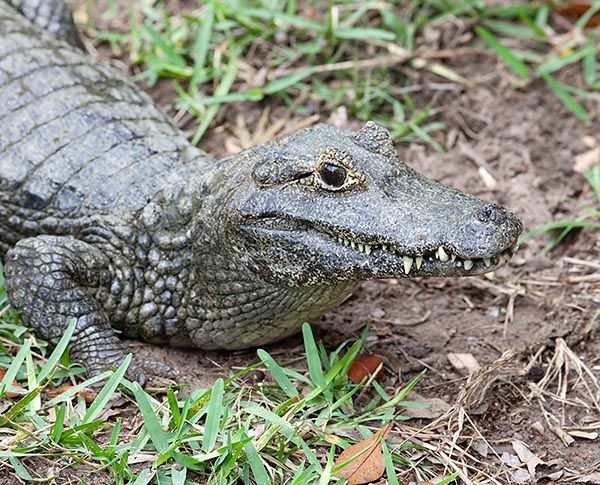 The Paraguayan caiman nourishes of freshwater gasteropods (snails), fishes (in particular southern piranhas) and some serpents, but, in the case of bigger individuals, also of aquatic birds and capybaras.

The juvenile specimens may fall victim to the Jaguar (Panthera onca) and to the Yellow anaconda (Eunectes notaeus).

The livery, for colouration and patterns, is similar to that of the Caiman crocodilus .

The Caiman yacare reaches the length of 2,5-3,0 m. Like the other species of caiman, it has osteoderms on the head and the back, which are however less present along the sides, and it is rightly from the last ones that they get the skin which is better tanned, to be used in the fashion industry.

Compared to the other caimans, the head is relatively short. Only the most aged individuals have the teeth of the lower mandible protruding outside. The dentition consists in 72-82 teeth, as an average, 74, thus distributed: 5 pre-maxillary, 14-15 maxillary and 17-21 mandibular. These characteristics are emphasized by the breeding in captivity.

Also in this species, it’s the male who builds up the nest, on the soil, far away from the water body in order the flood risks. The female lays there from 21 to 39 eggs, and then the nest is buried. Usually, the spawning takes place by the height of the rainy season and the hatching happens by March.

Nowadays, due to the anthropic pressure which these animals are submitted to, if compared to 50-60 years ago, the females have become much more cautious in respect to the progeny and keep the watch much more diligently than in the past. But the Black caiman (Melanosuchus niger), which may reach the remarkable size of 6 m, the various species of caimans do not attack the humans, but may however cause very painful wounds or tear off a hand.