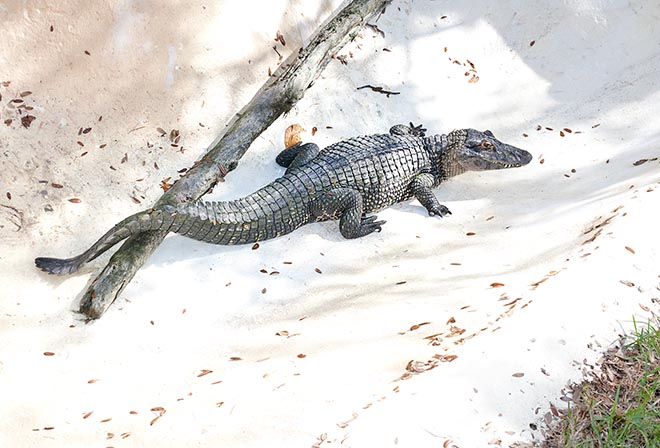 The Black caiman (Melanosuchus niger Spix, 1825, some authors still utilize the old denomination of Melanosucus niger), is a loricate afferent to the order of the Crocodiles (Crocodylia), family of Crocodylids (Crocodylidae), subfamily …. also here, as seen in the texts concerning the Broad-snouted caiman (Caiman latirostris), of the Yacare caiman (Caiman yacare) and of the Spectacled caiman (Caiman crocodilus), some authors classify it in that of the Alligatorines (Alligatorinae) whilst others taxonomists place it in that of the Caimanines (Caimaninae) … genus Melanosuchus.

The lemma “melanosuchus” is compound and means “black crocodile”, comes from the union of “melas”, Greek genitive for “black” and from the old Greek “soukhos”, that is “crocodile”, which, in Latin, becomes “suchus”. The term “niger”, comes from the Latin and means “black”, in reference to the very dark livery of this species. Its common names are, in English, Black caiman; in French, Caïman noir; in Spanish, Caimán negro, Caimán, Legarto negro, Jacaro Açu, Yacare assu; in Portuguese, Jacaré assü, Jaracé Una; in Italian, Caimano nero. The CITES inserts this species into the appendix I, whilst the IUCN identifies for it a status of “low risk”, function of the conservation status, that is, LRcd (Low risk, conservation dependent). Biologists estimate a population of about 1.000.000 of specimens; vastly diffused species, though in the past, due to the utilization of the skins in the fashion matters, it has been heavily exploited; nowadays the populations of this loricate in various geographic areas appear to be recovering fairly well.

It is autochthonous to Brazil, Colombia, Ecuador, French Guiana, Guiana, Bolivia and, perhaps, of Venezuela (in this last case, the data are not confirmed).

It frequents various types of habitat, from the slow-flowing rivers, to the creeks, it is found also in the freshwater lakes, in the humid or wet savannah and in the freshwater swampy-marshy zones, such as the Pantanal.

As we have seen, the various habitats where it lives are all with freshwater, therefore it is a species elective of these waters.

In the past, the distribution of the Black caiman (Melanosuchus niger) covered all the Amazon Basin, presently is a little more limited.

This has coincided with the emptying, due to the venatorial pressure for getting skins to trade, upon the American crocodile (Crocodylus acutus) and the Orinoco crocodile (Crocodylus intermedius the skin hunters, at one point, finding less and less specimens of these two species, in order not to completely lose their profits, turned to the black caiman, even if its skin is less valuable and the utilizable quantity is scarcer.

From the skin of the black caiman they get some very shiny and strong leather, and for this reason, starting from the fifties of the last century, it was hunted massively and only in the sixties the attention of the poachers turned towards the Spectacled caiman (Caiman crocodilus thus freeing, at least partially, the black caiman from the venatorial pressure.

In some geographic areas, on the contrary, the hunting to the black caiman went on till the year 1970, and even after, depleting almost the 99% of the population in situ; in other areas, nowadays, the natural repopulation is still hampered by the presence of the poaching and of the spectacled caiman, which is more numerous. In these areas, the poachers may easily seize both species of caiman.

To this we have to add the pollution of various areas, the deforestation sustained and the wasting, burning them, of the swampy areas (especially in French Guiana), all afflicting, and not a little, the life of this splendid caiman, as well as that of other species. 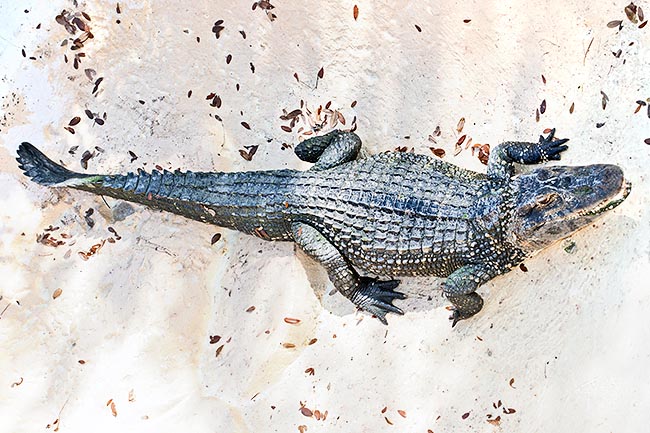 But it can also attack capybaras, cattle, and rarely the man © Giuseppe Mazza

Till the eighties of the XX century, quite poor were the data about the biology of this species; now we have more information, even if not exhaustive, about their ecology and biology of reproduction and also on the type of interaction this species has with the others present in South America.

The biologists are increasingly realizing that to the decrease of the population of the black caiman do not contribute only the aforementioned factors, but also, and perhaps above all, the reduction of the production of the fishes in the water streams where they do live, due to a decrement of the fluxes and cycles of nutrients in the relevant biotopes, in its turn caused by the numerical reduction of this caiman, which, with its dejections, provides a remarkable contribution to the fertility of the waters where it lives.

The numerical reduction of the black caiman is beneficial for the piranhas and the capybaras, its choice preys, but causes a further expansion of the agricultural areas. The data of census of population show us that in the majority of the areas where it lives, the same is reducing, whilst it remains stable in other isolated ones. Programmes of management and conservation for the population still intact, are in place, but the laws forbidding its hunting and regulating the management are difficult to apply in these geographic areas. Furthermore, it is not so easy to distinguish the skins of the black caiman from those of the spectacled caiman in order to know who has been killed for such purpose.

The procreation in captivity in Bolivia has begun during the seventies of the last century, but it is still to be improved and extended in order to get concrete outcomes. This loricate nourishes mainly of fishes (including piranhas and catfishes) and Capybaras (Hydrochoeris hydrochaeris). Its shows also an intense venatorial nocturnal activity, as it has, even if being reptilian, sharp eyesight and a good hearing. They are the cause of attacks towards the cattle and also, even if rarely, towards the man.

This is the largest species afferent to the subfamily of Caimanines (Caimaninae) or Alligatorines (Alligatorinae). The males may reach the 4 metres of length. There are rumours of specimens long even 6 m, but this has not yet been demonstrated with catches.

Despite hunting, it still counts 1.000.000 units and so it is a low risk species © Giuseppe Mazza

The overall appearance recalls, roughly, that of American alligator (Alligator mississippiensis), though the com- mon name can suggest a much darker livery.

The lower jaw is of grey colour, which becomes brown in the older specimens, whilst the juveniles have a yellow-white band along the sides, even if more rarely this may be observed also in some older specimen; this band, in any case, tends to disappear with the growth.

It differs from the other species of caimans due to the shape of the skull, the presence of bigger eyes and of a somewhat narrower snout.

Like other species of caimans, there is present a bony crest starting from each eye and descending to the back of the snout.

The dentition consists in 72-76 teeth: 5 pre-maxillary, 13-14 maxillary and 18-19 mandibular. The eyes, big, are indicative of nocturnal activity, whilst the sensorial-tactile organs on the snout, recognizable by the presence of black spots, are useful for detecting the preys under water. In the offspring, the presence of a banding in zebra stripes serves to camouflage, as the young can be, in turn, become preys of predatory birds (nocturnal as well as diurnal), reptilians and big fishes, catfishes for instance.

Its ethology and reproductive ecology are poorly known. We know that, during the dry season, the female digs a hole and lays there from 30 to 65 white eggs (usually they are 50-60), and then closes it.

The nests can be hidden or placed in open areas; but, in any case, once laid the eggs, the mother keeps close to the nest and keeps watch.

The incubation lasts 42-90 days. By the beginning of the rain season, the female opens the nest, takes off the young with the mouth and carries them into the water. It often happens that the females dig the nests one close to the other. At the hatching time there will be a quite numerous progeny, and this a winning strategy for saving a good percentage of young from the predators and thus perpetuating the species.