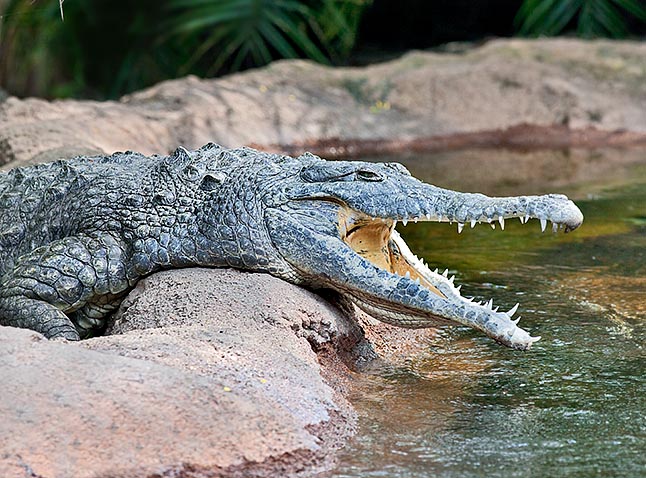 With only 250-1500 specimens the Crocodylus intermedius is one of the rarest crocodiles in the world © G. Mazza

The Orinoco crocodile (Crocodylus intermedius Graves, 1819) is one of the biggest crocodiles with elongated snout or longiroster.

The common names in other languages are: in English, Orinoco crocodile, Colombian crocodile, Venezuela delta crocodile; in Spanish, Cocodrilo del Orinoco, Caimán del Llanos ; in French, Crocodile de l’Orénoque. The etymology of the term “crocodylus” has already been explained in the text of the Crocodylus cataphractus, word originating from the ancient Greek and meaning “worm-shaped pebble”; the lemma “intermedius”, in the specific, is a compound word coming from the Latin and means “in the middle”, referring to the morphology the snout this crocodile has, as it stands between the classical V shape, typical of most species of the genus Crocodylus and the longirostral shape of the Gavialis gangeticus. The CITES inserts this species into the appendix I, the IUCN identifies for it a status as species critically endangered, indicated as CR A1c, C2a; the biologists estimate that presently its population counts only from 250 to 1500 individuals!

Seen its limited geographical distribution, the wild population of this crocodile is in continuous decline and danger. The destruction of the habitats where the biotopes where it lives are present and the ongoing hunt to which it is submitted for the skins trade, stand among the problems endangering it. Until the first half of the last century, the Orinoco crocodile did live in a vast spectrum of habitats, such as rivers, streams and tropical forests; as part of the South American tropical forest has not yet been explored, the biologists do hope that large nuclei may have survived in isolated conditions. The intensive hunting they have encountered, especially during the thirties of the last century, took advantage also from the tendency these reptilians had in concentrating, during the drought periods, in specific areas, especially in Colombia. Several thousands of animals were killed throughout the decade 1930-1940. The impact was so much devastating that they reached the limit of extinction of the species; later on the Colombian government, pressurized by the local biologists, imposed the absolute prohibition of hunting, even if outbreaks of poaching have continued till our times.

In spite of the hunting ban, the population of Crocodylus intermedius did very slowly increase, especially in Colombia, though the available data are not much reliable, whilst in Venezuela the situation seems better.

Snout has an intermediate look between classical crocodiles and gavial, whence the name intermedius © G. Mazza

Its presence is limited to Venezuela and Colombia.

It is primarily a river species (that is, riverine or fluvial) which colonizes the intermediate and lower parts of the Orinoco river. However, it lives also in the vast savannahs of the Llanos (Los Llanos or El Llano) in Colombia as well as in Venezuela; during the rainy season this savannah area is waterlogged, thus creating seasonal and temporary water streams.

As briefly mentioned before, the specimens living in the Los Llanos, this reptilian, thanks to more numerous populations, did live also in other habitats such as the tropical evergreen forest, in the creeks and in the Andean hills. During the dry season, the individuals living in the Los Llanos, move to innermost areas where remaining pools of water are present, here, they can create burrows inside which some water is trapped and plunge there; alternatively, they may also move by land looking for freshwater streams.

During the seventies of the XX century, some biologists sighted specimens of Orinoco crocodile also on islands placed several kilometres off the Colombian and Venezuelan coasts, for instance, they were found on the island of Trinidad at 150 km from the north-eastern coasts of Venezuela. Probably, these animals were carried into the sea by waters of the flooded Orinoco River and then, by swimming, they reached the island, or were carried there by the floating masses of vegetables (logs, plants, branches) which form during the uncontrolled floods of the river. In both cases, this shows that this species of crocodile has a certain tolerance to the marine saltiness.

The young of this species nourish of aquatic arthropods, amphibians and small fishes. The adults, seen their size, eat the fishes, and the birds they catch when silently getting close to the banks. In the dish fall consequently flamingoes, spoonbills, redshanks, herons, etc., but also mammals, such as the capybaras. Some natives relate finally about fatal attacks against the human being, but, due to their low numerical density, the biologists are not completely sure of this. Indeed, they do not have doubts that these reptilians may be able to kill a man, but they consider that the probability of meeting a man is quite low.

This crocodile is one of the biggest species of the group. In the past there have been people stating of having seized or observed even 7 m long specimens, but to date the biologists in the natural history museums have seen only males (the females are usually shorter), of 5 m of length, seeing similar sizes in the wild. The snout is relatively long and narrow at the apex, like that of the Crocodylus cataphractus. 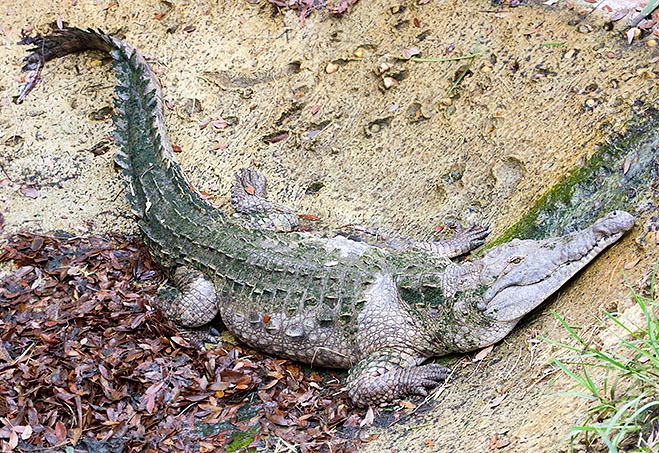 It exceeds the 5 m and eats, depending on the size, aquatic animals, birds and mammals © Giuseppe Mazza

In the specimens living since long in captivity, the rostral apex seems to bend upwards.

Dorsally, the armour has a symmetrical look, in the rest of the body, on the contrary, resembles to that of the American crocodile (Crocodylus acutus).

The biologists have identified three different colourations of the livery, which may be related to the age or the habitat where it lives (for instance, in captivity) and have given them the following names:

Mariposo: the body is greenish-grey, black dorsal spots are present.

Amarillo: this is the most common and also the brightest colouration, scattered dark spots are present.

Neck and head are relatively slender. The number of the teeth amounts to 68, so distributed: 5 premaxillary, 14 maxillary and 15 mandibular.

The nest is dug, probably by the male, between January and February, during the only yearly dry season; this species prepares the nest on the sandbars close to banks of the river, seen that during this season the water levels a low due to the low water flow. The females of Crocodylus intermedius lay a substantial number of big white eggs, from 15 to 70, 40 as an average.

Even if during the incubation period, lasting about 70 days, they keep close to the nest for defending it, many eggs may be predated by the vultures, the anacondas, and the Common tegu (Tupinambis nigropunctatus), a big omnivorous lizard, even one metre long, which is the equivalent of the Old World’s varanus, called by the Americans monitor lizards.

The egg hatching coincides to the arrival of the first rains and therefore with the increase of the flow of the river. At birth, the mother carries the the little ones to the water with the mouth and takes care of them for one to three years.