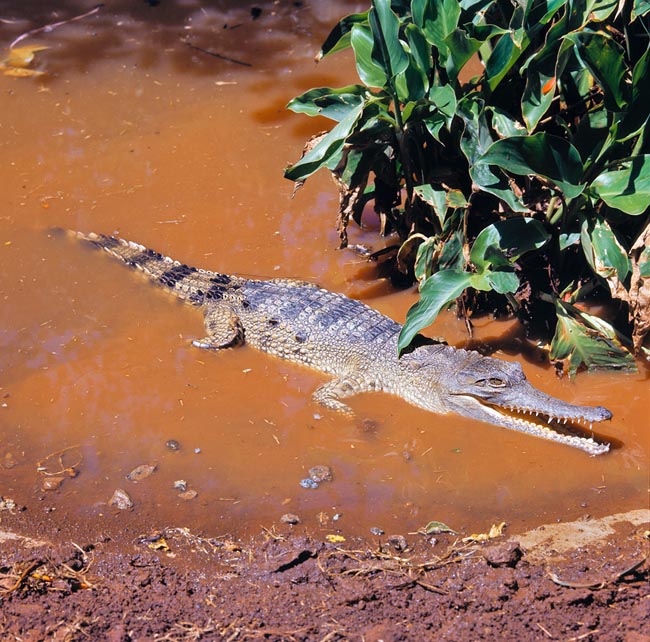 The unusual Slender-snouted crocodile (Crocodylus cataphractus Cuvier, 1825 or Mecistops cataphracuts) is a little known crocodile and still little understood, even the name of the species is still now under discussion.

Recent works done on the mithocondrial DNA (mitDNA), have revealed a certain phylogenetic distance between this species and the genus Crocodylus (by some written Crocodilus), whereby the taxonomical biologists of the International Code for Zoological Nomenclature (ICZN) have introduced the genus Mecistops, not accepted by all authors and for the moment not very common; for such reason it is still called Crocodylus cataphractus, but if the term Mecistops will spread, we cannot exclude, in the future, the final passage to Mecistops cataphractus.

Many are the common names in the various languages with which this loricate is called. In English: Long-nosed crocodile, African sharp-nosed crocodile, Subwater crocodile, African slender-snouted crocodile; in French: Faux gavial d’Afrique, Crocodile à museau étroit, Crocodile à museau allongé de Afrique; in Spanish: Cocodrilo hociquifino africano; and in the local language, Cabinda. The CITES inserts into the appendix I, whilst the IUCN identifies its status as DD (Data Deficient), perhaps EN-VU, that is, endangered. Unluckily, the difficulty and the little money spent for studying it, have prevented biologists to get a clearer idea.

In any case, these scholars, relying on its geographical distribution, on the ethology and from ethno-biological data obtained from the tribal population about this reptilian, besides the presence of teeth and skins in the natives’ villages, as a result of hunting trips, estimate that the present population amounts to about (very roughly) 50.000 individuals and that in many areas, where it was present until the last century, it has now disappeared. 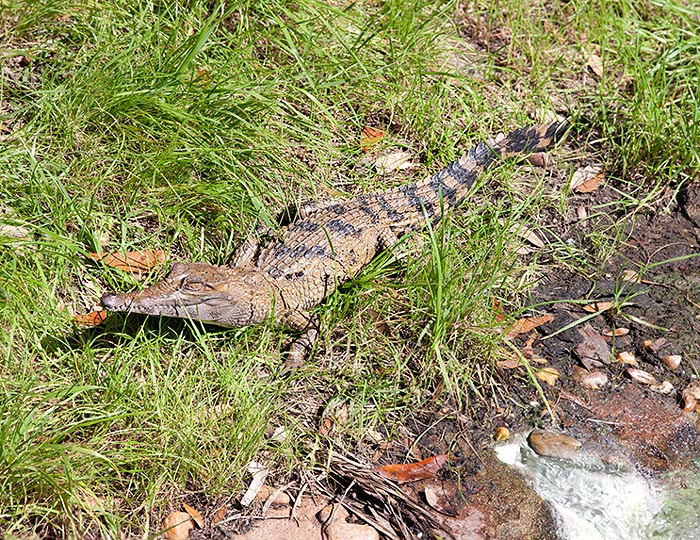 It loves water and the long and narrow snout, like the gavial, reveals a piscivorous diet © Giuseppe Mazza

Being an electively aquatic species, it is found mainly in fluvial habitats associated with river forests.

It also lives in the bottom of great lakes; some biologists have observed the presence of this species also in more brackish waters close to the coast, or near small islands such as Bioko island, an island of the Equatorial Guinea, placed at about 50 km from the coast of the Gulf of Guinea and of the Cameroon off the coasts of western Africa.

The possibility to live in waters with a greater salt concentration, leads to think that these animals are endowed of a certain tolerance towards a moderate salinity.

The data about the ecology of this species are very poor. The various areas where the herpetological biologists, either strangers or African, have gone from the last century indicate a massive decrease of the local populations; in some cases the so-called phenomenon of the emptying has occurred, which means the disappearance of an animal or vegetal species in much short times. In spite of this, the species, rightly because abundant data are missing, is not yet considered as endangered.

The most populous nucleus is found in Gabon, whilst the other areas show a robust decrease, in particular the Chad and the Angola. In areas where they have never been numerous and have not even increased with the time, for instance, in Guinea Bissau, Gambia, Senegal, Zambia, it looks like that a veritable emptying is underway.

The main cause of such decrease is to be attributed to the hunting done by the tribal populations as well as to the poaching for the utilization of the skin in the western fashion, which have reduced locally also the populations of the Nile crocodile (Crocodylus niloticus), but also due to gradually increasing anthropic pressures which are also cause of pollution, due to the increasing urbanization and to the modifications of entire biotopes for converting them to the agriculture. The difficulty in obtaining data about the ecology of this species is due also the political and social instability characterizing, unluckily, along with the poverty and the severe health and humanitarian problems, many of the nations where this crocodile is located, as representative of the local wild fauna. It is thought that the diet consists in various species of fishes and freshwater invertebrates; like the other species of crocodiles, also for the Crocodylus cataphractus, the bigger specimens can opportunely nourish of preys hunted by other animals, like monitor lizard or small felids, obviously, not those of a lion or of a leopard. 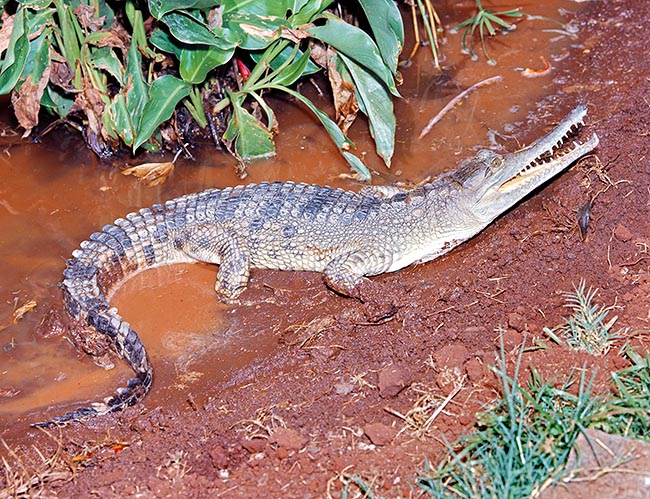 The biologists consider it a small-medium sized crocodile. Usually, they are 2,5 m long, but some males may reach the 4,3 m.

The common name of long-nosed crocodile comes from the longirostral morphology of the snout, which renders it similar to one of the South American giants, the Orinoco crocodile (Crocodylus intermedius); the narrow and long snout, like for the Gharial (Gavialis gangeticus), is a sign of a piscivorous alimentation.

Protective scales on the neck and in the post-occipital area, distributed in six small ones, with four bigger at the centre, which form, all together, a triangle, are placed on four rows converging in a single cordon with those of the back, rightly there; unlike other species of crocodiles, where on the back are maintained two different rows.

They have some spots on the skin, quite similar to those of the alligators and the gavials. The subadult specimens have very narrow jaws which resemble to the adults of other species, such as Crocodylus johnsoni, Tomistoma schlegelii and Gavialis gangeticus. In the adult individuals, the skull and the jaws assume the longirostral characteristics typical of the species. The dentition consists in 64-70teeth so distributed: 5 (very rarely 4) premaxillary; 13-14 maxillary; 15-16 mandibular.

This species of crocodile usually does not live in groups, but n the mating season. It is the female which builds up the nest, mostly formed by leaves and grass placed in a dug hole, which, once the nest is closed, will furnish by means of the fermentation the right incubation heat to the eggs. The nests are placed along the banks of the rivers, at due distance to avoid, during the rain season, the water floods; the female begins to build it by the coming of the rainy time. Phenomena of temporal asynchrony may occur, inside the same group, in the construction of the nests.

Compared with the “sympatric” species of Dwarf crocodile or Osteoleamus (Osteolaemus tetraspis), which can build the nest in the same fluvial areas, the Crocodylus cataphractus has a shorter nesting period. The female lays from 13 to 27 bug eggs, as an average 16, into the nest it has built; the numbers varies depending on the size of the body, the eggs laying begins one week after the completion of the same. The incubation time is longer than that of other species of crocodiles, about 110 days; the female keeps watch to the nest, but with less aggressiveness than that of other species. When the eggs hatching approaches, the little ones, synchronically, start to emit some sounds similar to twittering in order to draw the mother’s attention, which, immediately, carries them to the water with the mouth, defending them from monitor lizards, jackals and birds of prey.