The term “osteolaemus” literally means “bony throat”, compound word coming from the ancient Greek “osteon” = “bone” and “laimos”, always in old Greek, = “throat”, with reference to the robust osteoderms (bony plates) which cover broadly the throat and the ventral scales. The lemma “tetraspis” is a compound word literally meaning “four shells”, coming from the fusion of “tetra” = “four” and “aspis” = “shell”, both words come from the ancient Greek, with reference to a group of four bony plates (called nuchal scales), present on the back and on the neck.

Two subspecies are recognized by some biologists: one is the Osteolaemus tetraspis osborni, where “osborni” means “of Osborn”, from the family name of the biologist who discovered it; this loricate is localized in Congo, this subspecies is also called Osteoblepharon osborni; the other one is the Osteolaemus tetraspis tetraspis. After the systematic biologists of the International Commission for Zoological Nomenclature (ICZN), this subdivision in subspecies appears not entirely convincing, suggesting that, in reality, these subspecies might quite well be classified as species or as a much diversified/polytype complex of species.

The CITES places it into the appendix I, the IUCN identifies its status as “vulnerable”, which is, A2cd. Biologists estimate a population of 25.000-100.000 individuals. In the end, the population in some areas has been heavily harnessed, survival data for the various remaining nuclei are quite scarce, and in any case the vast and variegated geographic distribution slows down its decrease. 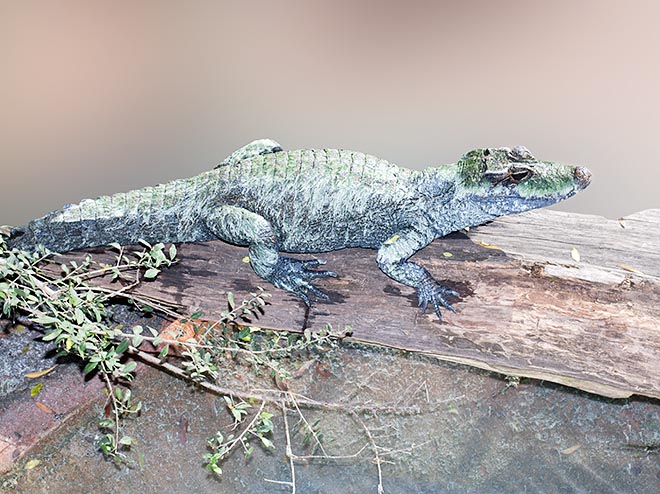 The two subspecies have the following localizations:

The Osteolaemus tetraspis osborni is mainly present in the Democratic Republic of the Congo, which, officially, is nowadays the Zaire, or better, the Republic of Zaire.

Rarely are met isolated specimens living inside water pools in the savannah. Here, the dig burrows where they spend the whole day, being active during the night.

Some times, during the rains season, these burrows are submerged, and therefore the entrance is under water. So, when the sunset has come, it comes out from these pools or submerged burrows to go foraging, keeping however always inside, or close, to the water, ready to plunge as soon as it perceives a danger, for instance, a lion or a leopard.

Some individuals live in small lakes in the pluvial forest and spend part of the day under the roots of the trees. The ecology of this African crocodile resembles to that of the smallest in the world species of crocodile (which, actually, is a caiman), a New World species: the Musky caiman (Paleosuchus palpebrosus).

As mentioned before, the CITES inserts this species, since long time, into the appendix I, although in Congo, by the end of 1980, it has been inserted into the appendix II. In any case, the biologists tell us that it is not a species at immediate risk seen the ample geographic distribution characterizing it; as a matter of fact, in some nations it seems to have even a high density, whilst in others, such as in Liberia and in Gambia, they hypothesize the phenomenon of the emptying has already taken place.

The available data about the real density of population are still uncertain and poor, an for this reason the CITES prefers to keep it in the appendix I and, in spite of the ambiguity of these data, the IUCN identifies for it a status of “vulnerable” inside the red book, from 1996 up to now, relying more, however, instead of sure numbers, on their vast geographic distribution, as if this should be a form of hope!

The problem in getting data depends on the difficulty of reaching the places where these reptilians are localized. The birth of natural parks for the protection of these animals in western Africa has been, in the time, very slow. The low economical value of the skin of this crocodile, due to the presence of numerous osteoderms, has in fact discouraged the construction of crocodile farms for the reproduction and the breeding in accordance to eco-sustainable management and conservation principles.

This species is hunted mainly for the meat. Presently, this is the greatest pressure it is getting, but, in the long run, there might be, unluckily, the addition o the environmental pollution and the destruction of the habitats where it lives. It nourishes manly of crustaceans, amphibians and fishes and of some terrestrial micro-mammal.

In Congo, the biologists have observed on the field that the African dwarf crocodile changes type of preys depending on the season: during the rain period, when fishes abound in the water streams or in the small lakes where it is located, it mainly nourishes of them, but during the dry season, when the fishes are less, it settles for the crustaceans, and thus decreases the nutritional input. 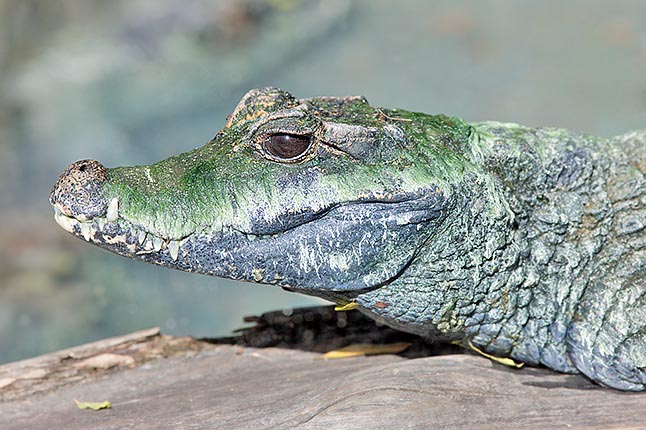 This crocodile has heavy and robust armour, on the neck as well as on the back and along the tail, where are present bony scales.

The nuchal scales organize after a scheme as follows: three transversal series, the first of which being formed by two large scales, the second too, whilst the third one is formed by two small scales.

The adult has a dark and homogenous livery, on the back as well as along the sides. In the juveniles we can observe some bright brown bands on the body and along the tail, whilst the head has a yellow pattern. The colour of the belly is of a yellow background with several black spots.

The adult individuals do not exceed the 1,9-2,0 metres. The two subspecies have some general characters and others on their own. For instance, the Osteolaemus tetraspis tetraspis has a lighter and more maculated colouration than the good species; the snout is bent with the tip upwards, and the scales of the armour, especially on the back, are much more robust. This last characteristic has earned him the common name of dwarf rough-backed crocodile.

The Osteolaemus tetraspis osborni is sincerely little known. The biologists talk of the presence of a snout bent downwards and of lighter armour. The dark colouration of the adult specimens of the good species is an eco-evolutive adaptation, in function of the habitat where it lives, such as the small water pools present in the pluvial canopy forests, where the penetrating light is poor; the same applies to the spots and the bands of the sub-adults, often present between the roots of the trees growing close to the water.

And same applies to the eyes, big in respect to the head. In this case, however, the eco-evolutive adaptation is more based on the fact that they have a nocturnal activity.

When we observe an African dwarf crocodile in the water, we note that it is completely immersed, whilst the head floats in the water, with the eyes placed outside; this crocodile is more elusive than other species and spends most of the day dipped in the water or in the holes it digs, for then getting out during the night.

This species carries on mainly a solitary life, but during the coupling time, which coincides with the beginning of the rain season (May-June). In this period, the female lays few white eggs, 10 as an average, more rarely, 20, inside hole-nests which are then buried. The period of incubation lasts 85-105 days, the young, upon the birth, measure about 28 cm.

During the incubation time the mother keeps the watch to the nest, caring the young also after their birth for a period whose duration biologists still ignore.