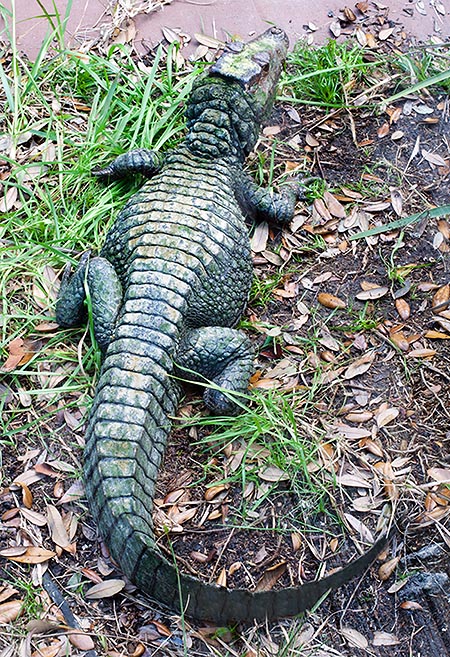 The etymology of the lemma “paleosuchus”, which means “ancient crocodile”, comes from the ancient Greek “palaios” = “ancient” and “soukhos” = “crocodile”, in reference to the taxonomical dating of the genus.

The term “palpebrosus” means “bony eyelid” and comes from the Latin “palpebras” = eyelid and “osus” = “full of”, in reference to the bony plates on the upper eyelids.

The common names in English are: Cuvier’s smooth-fronted caiman, Cuvier’s dwarf caiman, Musky caiman; in Spanish, Cachirré, Jacaré pagua; in French, Coroa. The English common name of Cuvier’s smooth-fronted caiman, reflects a lack of infraorbital bony crests if compared to the Common caiman, or Spectacled caiman (Caiman crocodilus), where, on the contrary, they are well present; this leads the biologists to think that the genus (Paleosuchus), can be a taxonomical branch which detached from the genus Caiman Caiman more than thirty million years ago.

The CITES places it in the appendix II, the IUCN defines its status as of “low risk”, that is, LRIc. Biologists estimate a population of about 1.000.000 of specimens. Essentially, this species of caiman is not subject to particular pressures, venatorial or environmental-anthropic whatever; the population is quite numerous and has healthy nuclei.

Endemic to South America, where it has a geographic distribution fairly vast, it is found in Colombia, Brazil, Bolivia, French Guiana, Guiana, Ecuador, Paraguay, Surinam (formerly, Dutch Guiana), Peru and Venezuela. The Cuvier’s dwarf caiman (Paleosuchus palpebrosus), has a slightly ampler distribution, as it is found also in Brazil and Paraguay, in respect to the sympatric species of the Smooth-fronted caiman (Paleosuchus trigonatus).

The typical habitats are represented by the fluvial forests along the Amazon River as well as the Orinoco, and also along the Paraguay rivers; in these biotopes it is found also in the drained and dried up but humid areas, and also in the flooded areas. It is present also freshwater swampy areas and in lakes with fresh water. In Bolivia, we find it also in small creeks and lateral branches of the main course of the rivers, where it may be sighted motionless on logs or floating trunks. Usually, it prefers clean and fast water streams, but in south-eastern Brazil and in Venezuela, it can be found also in watercourses poor in nutrients. Also the Cuvier’s dwarf caiman can dig and live inside holes filled up with water during the dry season and for most of the day. During the night, it can cover long distances by land, looking for a suitable stream or water source, or for hunting. It tolerates better than other species of caimans relatively low temperatures of the water, the sub-adults are often sighted inside isolated bodies of water.

The commercial value of the skin of this species of caiman is quite poor, for its small size, which means little of skin, as well as it is the caiman having the most of osteoderms in absolute; for above reasons, tanning its skin is too much expensive commercially. The largest osteoderms, which are also double, cover the ventral scales. Therefore, during its relatively peaceful life, the bigger menaces have been created by the destruction and the pollution of the biotopes and habitats where it is present, caused, for instance, by the mining companies which dig seeking gold. Though the catching of this reptilian is allowed by the law, for selling it to the zoological gardens and the aquaria, it seems that this pseudo-venatorial activity has, yes, slightly lowered the density of population in some areas of Guiana, but has not caused the emptying phenomenon characterizing other species of caiman.

Fairly exhaustive biology data of populations for this species have been obtained by the biologists during the census for other species of caiman; these tell us that the population has a vast distribution and that is healthy almost everywhere. The stability of the population along with the poor commercial interest has not required the creation of any caiman farms for this loricate. If, in the time, the tanning techniques will improve to the point that they will become able to treat the skin of this caiman at low cost, and if the population will be submitted to a substantial decrease, this by sure will stimulate the creation of such structures for an eco-sustainable management and its conservation. 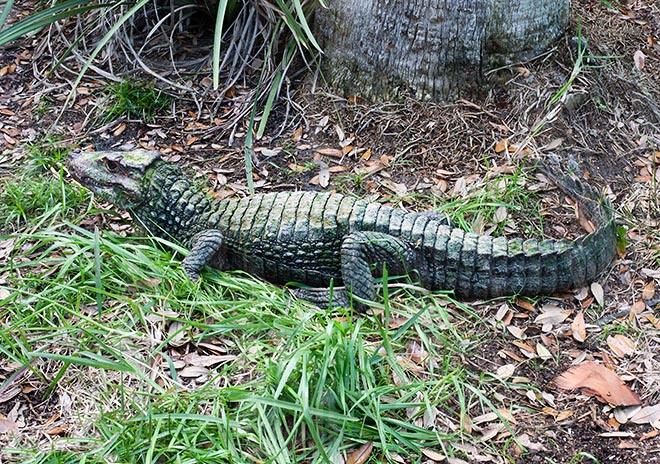 Well armoured for protecting from crashes in the fast waterways, it has an unusable skin © Giuseppe Mazza

Despite the exhaustive data relevant to its biology of population, in reality little is known about its biology (zoology, ecology, ethology, eco-ethology) and about the interaction it has with other species of caiman, which would be, objectively, useful to study.

The diet of this caiman varies depending on the habitat where it is located and on the trophic availability; usually, the sub-adults eat aquatic invertebrates (insects, larvae and some small crustacean), the adults, in addition to invertebrates such as arthropods (insects, in particular, coleopterans, crustaceans, such as shrimps) and molluscs either aquatic or terrestrial, nourish also of fishes of various type and size.

It is the smallest species of crocodile, the males, in the wild, reach, as maximum, the 1,5-1,6 m, the females the 1,2 m. It has a well ossified armour with dorsal as well as ventral osteoderms, whilst on the nape, probably, these permanent osteoderms serve for protecting themselves in the rapid water streams, where, while transported, they may crash against the rocks and for protecting themselves from the attack of possible predators such as the Jaguar (Panthera onca), which they can encounter during their night terrestrial journeys.

It has morphology of the head which stands among the most peculiar in the group of the crocodiles, as it is short, very smooth and concave, the skull is high and the snout is bent upwards, with an evident overlapping between the upper and lower jaws. The shape of the skull reflects a frequent utilization of the holes it digs, inside which it shelters with some water for aestivating or escaping the daily quotidian warmth.

The juveniles have a brown livery, with empty spaces, and become darker while growing. In the adult, the head is of chocolate colour, the iris has also the same colour. The lower jaw is spotted of white; the dorsal shells are less prominent than those of the Smooth-fronted caiman (Paleosuchus trigonatus). Along the lower jaw, in correspondence to black spots, are present some tact receptors, utilized for hunting. The dentition consists in 78-82 teeth turned backwards, of which 4 are premaxillary, 14-15 are maxillary and 21-22 are mandibular.

The data relating to the reproductive biology are somewhat fragmentary. The biologists have observed that these caimans may live alone or in pairs for most of the year; a precise coupling season has not yet been determined. The females build up nests in holes they fill up with vegetal material and mud, usually localized in hidden areas.

They lay from 10 to 25 eggs, which will have an incubation of about 90 days; upon the birth the adults help the newborns to move, digging the nest, and then they take them in the mouth and carry them to the water. The biologists are still investigating about the possible presence of lasting parental cares.

In reality, the young are taken into the water only one day after their birth, this because during the hatching they get covered by a layer of protective mucus which has to dry up, in order to reduce, once in the water, the growth of algae and parasitic fungi on the body.