The etymology of the lemma “paleosuchus”, which means “ancient crocodile”, comes from the ancient Greek “palaios” for “ancient” and “soukhos” for “crocodile” in reference to the taxonomical dating of the genus.

The common names in English are Schneider’s dwarf caiman, Smooth fronted caiman; in Spanish, Jacaré coroa, Cochirre, Yacaré coroa, Jacaré curua; in German, Keilkopf-Glattstirnkaiman. The Cites inserts it into the appendix II, the IUCN identifies for it a status of “low risk”, that is, LRIc. 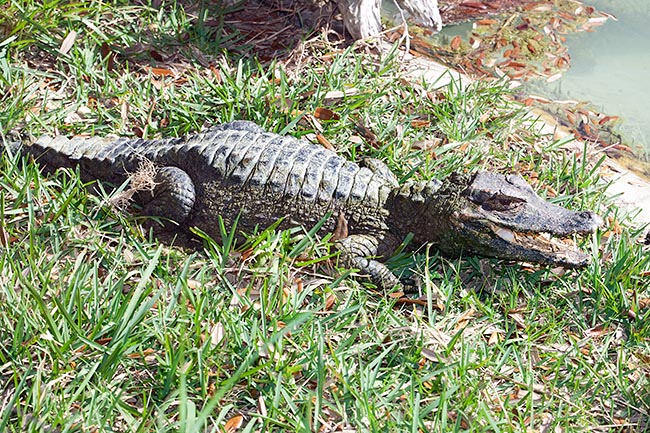 Presently, the biologists evaluate the population as about 1.000.000 of specimens. Finally, it has a population with a vast geographic distribution, formed by healthy groups and not subjected to any apparent pressure of whatever type.

It is endemic to South America, where it is distributed in Colombia, Brazil, Bolivia, Ecuador, Guiana, French Guiana, Surinam (formerly Dutch Guiana), Peru and Venezuela.

As said for the Cuvier’s dwarf caiman (Paleosuchus palpebrosus), these two sympatric species do overlap their distribution areas in many countries, but this overlapping decreases while moving southwards, probably due to a minor tolerance towards lower temperatures of the water on the part of the Smooth-fronted caiman (Paleosuchus trigonatus). We have in fact to keep in mind that in the austral hemisphere, under the Tropic of Capricorn, therefore at extreme southern latitudes, the temperature of the water, of the sea as well as of the continental waters, like the atmospheric one, drops even remarkably.

It is a species which loves the fluvial water streams, in particular the lateral branches of the rivers; little deep water courses and surrounded by the forest. Especially during the warm periods, it spends most of the day in holes filled up with water. During the night, it can cover even long distances, by land, for nourishing or for seeking new water courses and the shape of the snout indicates a preference for the fast ones.

In many nations, in particular in Venezuela and in Bolivia, it has habits and ecology similar to that of the Cuvier’s dwarf caiman (Paleosuchus palpebrosus). In Venezuela, the biologists have observed their presence also in water streams at 1.300 m of altitude. The diet varies with the age as well as with the habitat where they live. 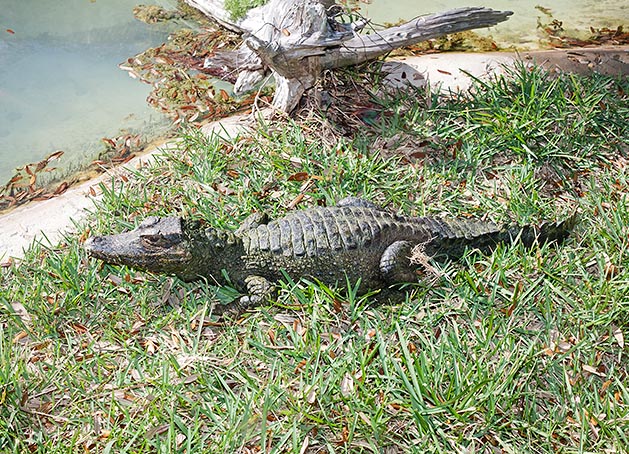 Endemic to South America, it’s one of the smallest crocodiles, with 1,7-2,3 m of length © Giuseppe Mazza

As briefly said before, this other species of the genus (Paleosuchus), sympatric to the species Paleosuchus palpebrosus, luckily, due to the rich presence of osteoderms in the skin, has not been submitted to an intense venatorial pressure, if not for the seizing of specimens to sell to the zoological gardens, the aquaria or even as domestic animals. But the percentages of seizing, fortunately, have never been able to damage the natural stocks of this caiman.

The only true menace, as on the other hand is the case for any other living, animal or vegetal, in those areas, comes from the mining companies, which, while looking for gold, deteriorate entire biotopes, up to their destruction. The data on the biology (zoology, ethology, and eco-ethology) of this species are still now little known, as are little known the effects of interaction and overlapping between the two species of Paleosuchus.

The young of the smooth-fronted caiman nourish mainly of terrestrial invertebrates such as arthropods, molluscs, unlike the young of other species of caiman which usually predate the aquatic ones. The adults, in respect to other species of caimans and crocodiles, nourish mostly of terricolous species, such as snakes, lizards, micro-mammals and also of big rodents, such as the capybaras; when in water, they integrate this diet with the fishes, which are, however, preferred by the sub-adults.

The diet depends also on the availability of the preys. The biologists have observed that these caimans tend to hunt mainly during the night, close to their holes, dug always close a water stream. But is the preys are lacking, they can penetrate, even for various kilometres, the forest looking for food. 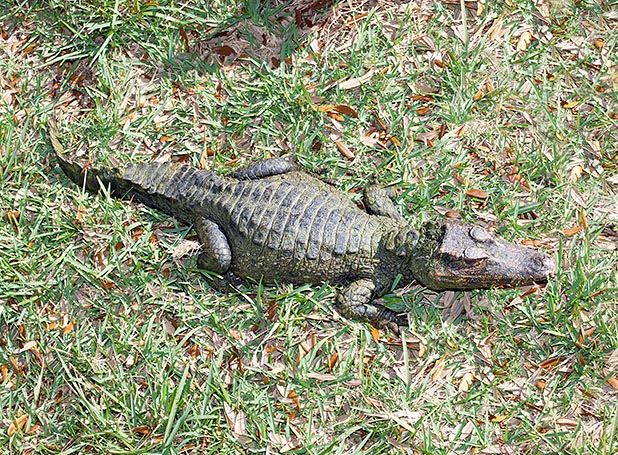 The lateral projection of the shells, in the double row present on the tail, is more dorso-ventrally flattened is compared to that of other species of crocodiles, where it is more laterally flattened.

The iris is brown in colour, but with the age it takes a greenish colouration. The bony and infra-orbital crest which reinforces the skull in other species, such as the Spectacled caiman (Caiman crocodilus) is absent.

It has the particularity, when walking to place the head in an elevated way, characteristic which is much distinctive present only in this species.

It is a solitary species, but in the reproductive periods, with fairly vas distribution areas. When the rain season approaches, the sexually mature females begin to dig the nests, typical holes in the ground apt for receiving the eggs and then they bury them.

Usually, the couplings begin when the female is 1,30 m long and the male is about 1,40 m long, usually between the 10-20 years of age. It is not rare to find the nests close to the termite mounds. Biologists think that these take advantage, by means of suitable connecting holes, of the heat emitted by the activity of the termites, thus keeping the incubation temperature of the eggs the most constant possible.

These last are usually 10-20 and the duration of the incubation is longer than other species of crocodiles. As a matter of fact, it is lasting, as an average, 115 days. The hatching of the eggs coincides with the increase of the levels of water due to the rains; the juveniles, at the exit, spread in a vast area, which is in function of the ample distribution area of the adults.

In the adults, the mortality rate is rather low, whilst, in young age it is fairly high, due to the raptors, the snakes and also to the jaguars.