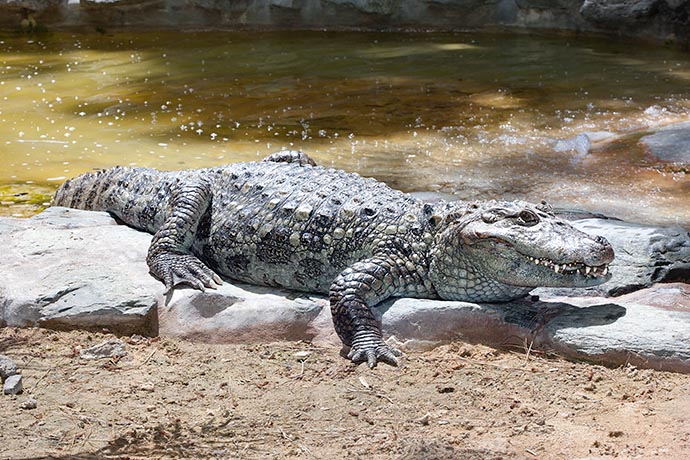 Caiman crocodilus is not endangered. Little hunted it adapts to various habitats to other loricate detriment © Mazza

The Common caiman or Spectacled caiman (Caiman crocodilus Linnaeus, 1758) is a loricate afferent to the order of the Crocodiles (Crocodylia), the family of the Crocodylids (Crocodylidae), to the subfamily …also here, as it happens for the Broad-snouted caiman (Caiman latirostris) and the Yacare caiman (Caiman yacare) the debate is still going on: some biologists insert it into the subfamily of the Alligatorines (Alligatorinae) whilst other authors place it in that of the Caimanines (Caimaninae) … and to the genus (Caiman).

This species, in the opinion of several South American and not prominent zoological biologists, breaks apart in various subspecies or races.

This fragmentation is accepted also by the taxonomical biologists of the International Code for Zoological Nomenclature (ICZN). These subspecies are:

the Caiman crocodilus crocodilus Mertens, 1977, present in Colombia, Peru and part of the Brazilian Amazonia.

and the Caiman crocodilus yacare Daudin, 1802 (in English Caiman yacare), as written in the text of the Paraguayan caiman, this was defined as a subspecies or race till 1950, but nowadays has assumed the status of species, that is, that of the Caiman yacare.

Some biologists of South American school consider other two subspecies or races: the Caiman crocodilus paraguayensis and the Caiman crocodilus matogrossiensis, but these last two have been rejected by most of the zoological biologists, including those of the ICZN. The common names in the various languages with which the spectacled caiman is identified (name originating from the presence of bony structures between the ocular orbits which resemble to spectacles) are, rightly, in English, Spectacled caiman (the term spectacled refers to the presence of this intra-orbital bridge, which simulates the spectacles); in Italian, Caimano dagli occhiali; in Spanish, Yacaré blanco, Legarto blanco; in French, Caiman de Brasil; in Portuguese, Jacaretinga lagarto, Babiche, Babilla, Baba and Tinga. For the CITES, the nominal species and all the subspecies are inserted into the appendix II, excepting the Caiman crocodilus apaporiensis, inserted into the appendix I. The IUCN defines a status of low risk LRIc (Low risk) for this species. Essentially, the Caiman crocodilus is the most common species of South American crocodile, although in some areas the population is scarce and some races are less common than others and the nominal species.

It is autochthonous in Colombia, Costa Rica, Brazil, El Salvador, Ecuador, Guyana, French Guyana, Honduras, Guatemala, Panama, Mexico, Nicaragua; Peru, Trinidad and Tobago, Venezuela. It has been introduced in Cuba, Puerto Rico and USA, where it is present. 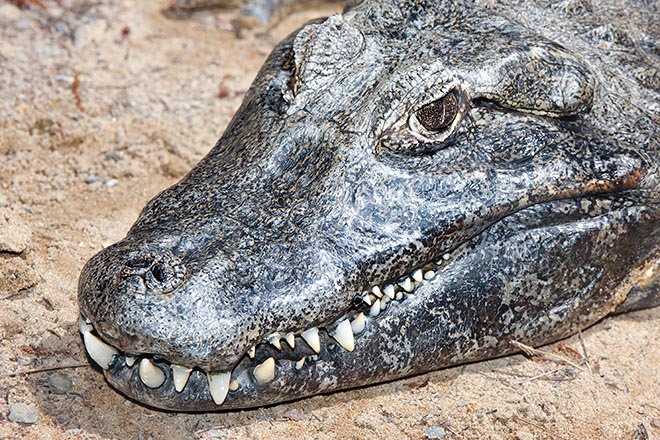 The snout recalls the alligator but the spectacles which originated its common name are noted at once © G. Mazza

The Caiman crocodilus had the good fortune of not being subjected to the hunting pressure, like other species sympatric to it, for instance, the American crocodile (Crocodylus acutus), the Orinoco crocodile (Crocodylus intermedius) and the big Black caiman (Melanosuchus niger), because its skin is little appetible in the fashion, as, being full of osteoderms, it is very badly tanned; only small areas on the sides have a hardly marketable skin.

This circumstance has had a double effect: the first, that the population of the spectacled caiman has not therefore undergone a numerical decrease due to the legal or the unlawful hunting, the second one, that the numerical reduction, in some case up to almost the disappearance of sympatric species like those mentioned before, has emptied or almost did so, various areas and biotopes where the ecological series of these different crocodiles could overlap, leaving the possibility to the Caiman crocodilus of freely proliferate thanks to the lack of competitors. Anyhow, like the American alligator (Alligator mississippiensis), also the Spectacled caiman (Caiman crocodilus), has undergone a sort of pressure, due to its utilization as domestic animal in several farms, or for being seized and then, later on, sold in the zoological gardens or even in the circuses. However, such pressure has not been capable to reduce to dangerous levels the population in the various South American nations where it lives. This proves its remarkable capability in adapting to different habitats, including artificial lakes or wetlands such as the Pantanal, as well as of being also endowed of a remarkable Biotic, or reproductive, Potential “Pb”. But, it must be said that in some nations, like the El Salvador, phenomena of depletion or of emptying due to the increasing urbanization, have started to happen.

The available data are, however, still uncertain, and do not contemplate the interactions which may take place with taxonomically more distant species; this applies in particular for the various races of the spectacled caiman. Furthermore, it seems that a market of the meats and of the seized specimens afferent to the various races of this crocodile is increasingly intensifying, and then the same are sold abroad, especially in Thailand and Singapore. The high biotic potential, also, creates problems especially in relation to the various races, for the crossings with pure bloodlines of other species of caimans, which may take place in the wild.

In the meantime, since about twenty years, the biologists are studying the impact the numerous populations of this caiman seem to have in respect to the cultivated fields and in towards the less numerous populations of other species of caimans and crocodiles. The high fecundity of this loricate animal allows the management of the “caiman farms”, which may be used for regulating the density of population of the specimens in the wild, but the whole would seem to be anti-economic. Finally, some Cuban herpetological biologists suspect that the high density of population of this caiman, so much prolific and adaptable, may have been one of the causes of the almost total disappearance of the nowadays very rare and endemic Cuban crocodile (Crocodylus rhombifer), up to the Isle of Pines in New Caledonia, which is, unique case, the exceptional distribution area characterizing this crocodile.

The young specimens of spectacled caiman nourish of aquatic arthropods (insects, crustaceans) and molluscs, as well as of amphibians and small fishes, whilst in the adults the diet is more based on the vertebrates: big fishes, reptilians, birds and also rather big mammals, such as capybaras and wild boars. After many biologists, this crocodile plays also an essential ecological role in the biotopes where is located in terms of recycling of the nutrients, in particular, for the Nitrogen (N) which is found in the dejections, with remarkable positive effects on the local vegetation. This is apparent when it suddenly lacks in an area: the flora, vigorous until that moment, in fact, tends to reduce and to wither. Moreover, the absence of this caiman from a water stream, also implies a lowering of the density of population of many species of fishes, for instance of South American cichlids, correlated with an increase of piranhas. This has led to hypothesize that they are also predators of these fishes, as, anyway, is the case of the Caiman yacare.

Other biologists have observed that during the dry season they need less food, because their metabolic rate lowers and that, in extreme cases, acts of cannibalism may be noted. Probably, the Caiman crocodilus is an omnivorous species, or has a generalistic or euryphagous alimentation, which is why it has the tendency to well adapt wherever it is located. 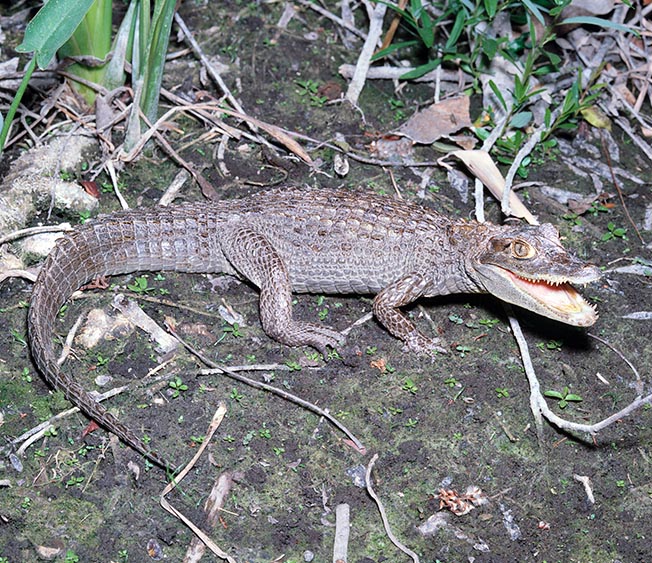 It is a medium-small species. Usually, the males measure 2,0-2,5 m, rarely 3 m specimens may be encountered; the females are smaller, 1,4-2,0 m as an average; 2 m females are rare in the wild, whilst are more common in the zoological gardens. As already mentioned, the common name of the spectacled caiman originates from the presence of a bony crest between the eyes, infra-orbital bridge.

Ossified triangular crests are present on the upper eyelids, which vaguely reminiscent of those of the Allosaur (Allosaurus, compound word coming from the ancient Greek meaning unusual, different lizard), a theropod carnosaur which lived by the end of the Upper Jurassic, Mesozoic era, about 140-157 million of years ago.

The juveniles’ livery is yellow with black stripes on the body and the tail, when the sexual maturity is reached, the yellow colour disappears and the black stripes become less noticeable. The adults have a dull olive green livery. The adult individuals of this species, like those of the American alligator, seem to be characterized by a limited capability to change the livery colour defined “metachrosis”, caused by the densification or the distribution of the melanin, the black skin pigment, in the melanophores (so are called the chromatophore cells in the cold-blooded vertebrates), by means of the neuroendocrine control.

The various races differ in the size of the body and in the shape and dimension of the skull. When observing an adult in the water, with the head emerging completely from the surface, we can note that the fourth tooth on each side of lower jaw is visible, unlikely the alligators. On the contrary, looking at the head from above, we can observe that it is quite similar to that of the alligators, being short and wide, the spectacled structure can be remarked, whilst the scales behind the head, nuchal and post-occipital, can be useful for their identification. There are 6-8 post-occipital scales, on 2-3 longitudinal lines and 4-6 lines of nuchal scales which continue on the dorsal shells on the back.

When in water, they may be often seen with the mouth open, because the particular anatomy of the palatine bone, or bony palate, hinders the entrance of the water into the esophagus. During the day time, the vertical-elliptic pupil is almost always contracted.

The females of the spectacled caiman do mature up when they reach a size of about 1,2 m and this happens by the 4-7 years of life; the males mature at the same age (4-7 years of life) to which, however, corresponds a bigger size, 1,4-1,6 m.

These loricate animals live n group, the social status a male holds inside the group is a basic ethologic parameter that has influence on its rate of growth and its coupling capacity. The non dominant individuals inside a group tend to grow up more slowly and less, being subjected to stress and this often hinders them to couple.

Both sexes gonads begin to grow (hypertrophy) during the dry season (April-May) and reach the maximum size during the rainy season (May-June). Courting and coupling usually take place between May and August.

The females lay 14 to 40 eggs, 22 as an average, during the rain season (July-August), inside the vegetation, and then is buried. The position of the nest can be in the thick vegetation or in open areas, but also on floating masses of vegetable substances in the fresh water streams where they live. More females may share the same nest and this increases the rate of survival of the progeny, something like what happens among the lions, where more females can take care of the cubs.

Predators of the eggs may be the anacondas, other caimans, birds and big lizard, such as the Common tegu (Tupinambis nigropunctatus).