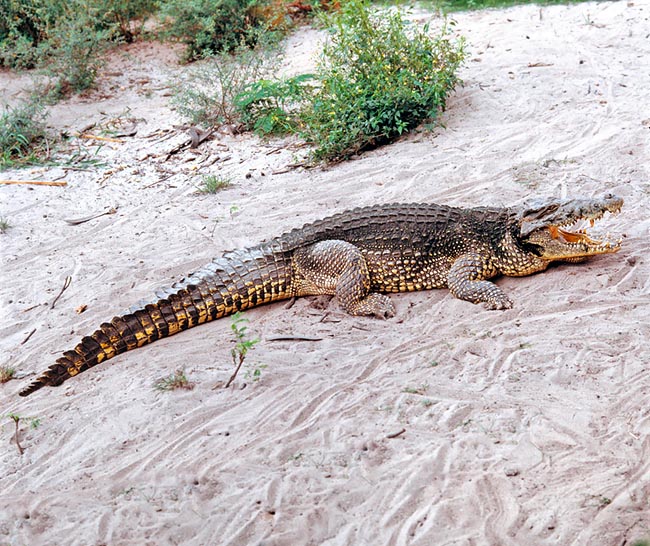 Crocodylus rhombifer, with 3000-6000 units only, is an endangered loricate © Giuseppe Mazza

The term “crocodylus”, already described in other texts, comes from the ancient Greek and means “worm-shaped pebble”, whilst the lemma “rhombifer” refers to the rhomboid shape of the scales covering its sides. Subspecies are not recognized, but some hybrids may form from the crossings between the Cuban crocodile (Crocodylus rhombifer) and the American crocodile (Crocodylus acutus); these hybridizations are detrimental to the purity of the bloodline of the two species, even if, in the wild, they happen with a certain frequency, as well as in the crocodile farms.

The danger comes from the fact that contrary to what happens in other phenomena of hybridization, the resulting progeny is fertile, and therefore it can cause genetic pollution.

Its common names are: in English, Pearly crocodile, Cuban crocodile; in Spanish, Crocodilo de Cuba, Cocodrillo, Criollo, Cocodrilo Legitimo, Cocodrilo Perla; in French, Cocodrile de Cuba, Caimán Zaquendo, Cocodrile rhombifère; in Italian, Coccodrillo cubano. The CITES places it into the appendix I, whilst the IUCN qualifies its status as “critically endangered”, that is CR A2cde. Biologists think that presently its population ranges from 3.000 to 6.000 specimens, 4.000 most probably.

The biologists have confronted the historical bio-geographic distribution of this crocodile with the present one, demonstrating that it has collapsed over the years; the major dangers consist in hunting, in the environmental pollution and in the phenomena of spontaneous hybridization with the American crocodile (Crocodylus acutus); nowadays, recovery and eco-sustainable management programmes of this species are active, and it seems that they are giving the first successes.

They are endemic to Cuba, in the swamps of the Zapata peninsula, in the north-west, in the Ciénaga de Lanier swamp in the Isle of Youth (Isla de la Juventude or Juventud); in the past, they were present also in the Cayman and the Bahamas islands, where nowadays they are extinct. Very few specimens, probably nowadays disappeared, had migrated until the eighties of the XX century, on the Isle of Pines in New Caledonia, a French special collectivity, so called by the legendary captain James Cook who discovered it during his second voyage to New Zealand, due to the quite numerous presence of Coral reef araucaria (Araucaria columnaris); for years it was utilized as “penal settlement” (and what a sort of settlement!), for political prisoners of the Paris Commune, a briefly lasted social democratic illegal government, which ruled the French capital from March 18th to May 28th of 1871.

They mainly live in the freshwater swamps, but they can, as they tolerate certain saltiness, get also close to mangrove areas. The Cuban crocodile is the most endangered species of crocodile among those of the New World. This is essentially due to its very low geographic distribution if compared to the other species; perhaps, in this it is probably worse placed only another species of loricate, which however belongs to the Old World, the Chinese alligator (Alligator sinensis). 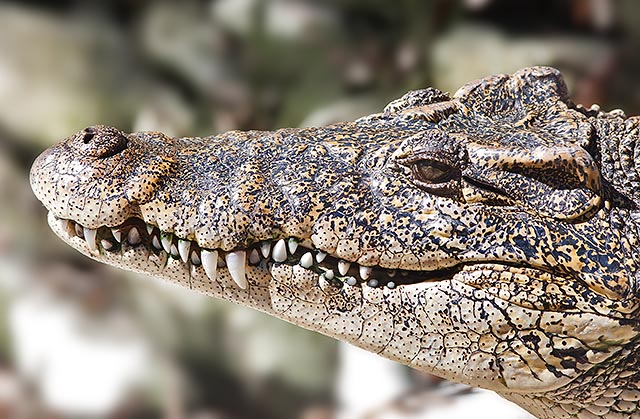 Subject to hunting, habitat changes and genetic pollution due to hybridization with Crocodylus acutus © Mazza

The population present in an area of 300 square kilometres, in the south-western part of the Zapata swamps (which, after many biologists, might be the only zone still inhabited), should amount to 3.000-6.000 animals all over.

Though the species, even if slowly, appears to be recovering, it is still in critical danger; as said, the main causes are ascribable to the hunting, to a progressive pollution of the habitats, to competition phenomena induced by the misguided introduction of other species, subspecies of non indigenous loricates, such as the Brown caiman (Caiman crocodilus fuscus ), to the already previously cited phenomena of hybridization with the American crocodile (Crocodylus acutus) and to the exploitation done by mining companies of areas inside which are located the biotopes of the Cuban crocodile, due to the presence of coal used as fuel. Furthermore, we have to consider that the information about the biology (ecology, ethology, zoology) of this species is quite scarce. The first crocodile farms, where this species is still now bred, were born in Cuba in the fifties of the XX century, for trading its skin and meat; these structures allow, by taking advantage of the specimens reproduced and bred “in situ”, of not usurping the natural stocks already, by themselves, very impoverished. For this reason the CITES has granted to one of these farms its official endorsement for producing and breeding Cuban crocodiles and trade their skins and flesh.

Since the creation of the first crocodile farms in Cuba, the phenomenon of the hybridization was problematic as it polluted the pure bloodline of both species, nullifying completely all the utility of the conservation projects; in spite of this, some Cuban biologists have been able to isolate a stock or nucleus of Crocodylus rhombifer which has never been polluted by hybrid genetic elements. Some local biologists have proposed to take all the hybrid specimens and to confine them together, thus separating them from the Cuban species, in order to avoid hybrid genetic migratory fluxes. Several specimens of Cuban crocodile are bred in captivity also by American zoological biologists in USA. This population of Cuban crocodiles, with pure bloodline, is essential, as it represents a means for avoiding the hybridization with other species and an always available source of specimens with which to repopulate the areas, for instance, the Zapata swamps, should the endemic natural population present there, decrease furthermore.

Their alimentary ecology mainly consists in fishes and turtles. The back teeth, in both jaws, are broader than the fore ones. With these, they crush the carapaces of the turtles they eat; this is a sign of trophic eco-evolutive adaptation. After some biologists, the present Crocodylus rhombifer should come from a prehistoric progenitor which lived till the Pleistocene, Quaternary era, which was mainly terricolous and nourished, thanks to its powerful jaws, of the mastodontic herbivorous mammals of the time; vestigial traces of such descendence, should be observed in back limbs much more robust than the fore ones, which allow it, when walking on the ground, to raise from the soil more than in other species of crocodiles, as well as in the capacity of moving nimbly on the ground and in the fact that they are endowed of a very fast way of stepping (they almost run) and may effect leaps. They nourish also of arboricolous mammals, for instance, of platyrrhine monkeys. They get out suddenly from the water with a leap, giving themselves a mighty thrust, with the tail, from below upwards, and seize the unaware prey, caught on the fly from the branches hanging on the water. 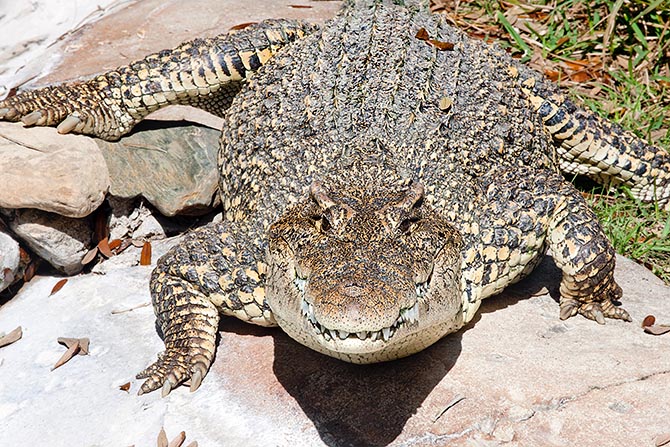 The biologists define the Cuban crocodile a medium-sized species.

The males reach the 3,5 m of length, even if some Cuban biologists have seized 5 m specimens. The females are about one metre smaller, and in any case it is a species which is smaller than the American crocodile (Crocodylus acutus).

The head is short and wide, and a bony crest is observed behind the eyes. The dorsal scales prolong from the neck up to the back. The feet have big scales, and those covering the rear legs are reversed compared to those covering the fore legs.

The scales covering the sides have the shape of a rhombus, whence the name “rhombifer”. The newborns have a just hinted and pale iris which will darken while growing up. The livery has a particular yellow, which, along with the black patterns, have led to the term “pearly” in the common English name “Pearly crocodile, “perlato”, in Italian.

Presently, there is confusion about the modality of construction of the nest on the part of this species, as well as about many aspects of its ethology and eco-ethology. In the wild, we see the female digging in the forest a hole to be utilized for laying the eggs, after which the hole is buried; in captivity (but not only, as, some times, it has been seen doing it also in the wild), they build a nest of mud and vegetal materials.

Probably, the strategy as how to build the nest is in function of the nature of the soil where to dig, as well as of the available material, such as mud, vegetables, etc. Usually, the female lays 30-40 eggs.

As already previously said, the Crocodylus rhombifer hybridizes with the Crocodylus acutus and, perhaps, also with some other species. Probably, in the case of the American crocodile, this happens when the reproductive season of the two species overlaps.

In Vietnam, where do exist crocodile farms where are bred also specimens of Crocodylus rhombifer, they have seen hybridizations with the Siamese crocodile (Crocodylus siamensis), the produced progeny, being sexually fertile, may be cause of genetic pollution for the purity of the bloodline of both species.