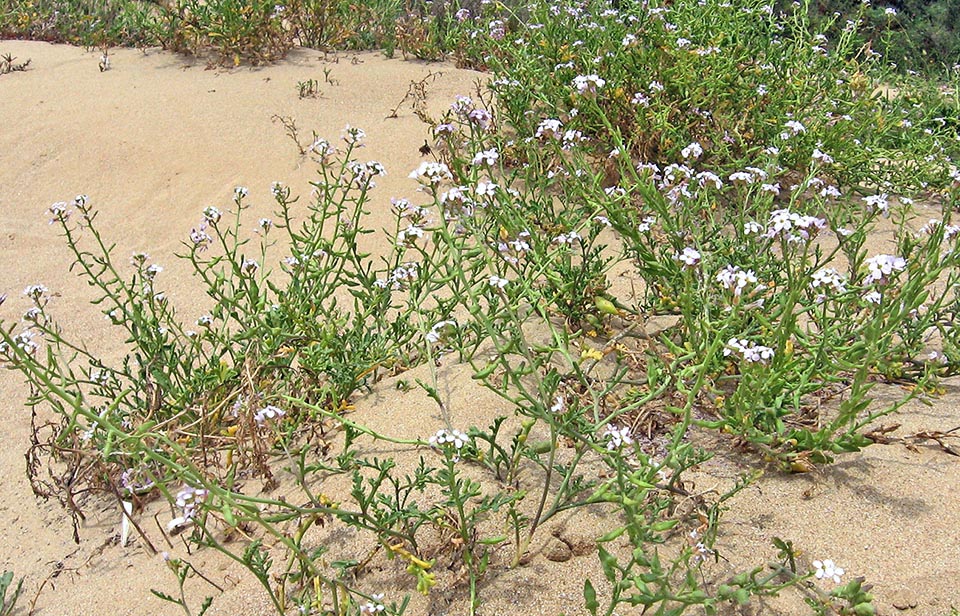 Cakile maritima is a pioneer species that stabilizes the coastal sands disturbed by the tides and the wind. The stem, succulent when young, corky with age, is ramified and forms small, even 1 l broad and 45 cm tall, bushes. The leaves are fleshy to limit transpiration, resist to saltiness and give the plant a reserve of water © Giovanna Marletta

Cakile maritima Scop., commonly known as Sea rocket or European sea-rocket is a species belonging to the tribe Brassiceae of the family Brassicaceae native to the coastal areas of Europe, of North Africa and of Western Asia. It has been introduced by the man in many other areas of the world and often behaves as weed as happens, for instance, in the western and eastern coasts of North America, replacing other endemic species of Cakile, like Cakile edentula (Bigelow) Hook. It has also reached the southern hemisphere, in Brazil, Uruguay, Australia, New Zealand and even New Caledonia.

The name of the genus should derive from kakeleh / qaqila, Arabic name of this plant that the Syrian physicist and physician Serapion the Elder (II half of the IX century AC) called Cakile because of its big woody root as reported by Mathias de l’Obel (1538 –1616) in his Plantarum seu Stirpium historia (1576). The specific epithet maritima, refers to the sea, that grows near the sea.

It is a pioneer species living mainly close to the sea, on the coastal sands, unstable, continuously disturbed and modified by the tides and the wind. The local deposition of organic debris, algae in particular, along the beach done by equinoctial spring tides furnishes nitrogen due to the decomposition of the organic material and this allows the rapid and strong growth of the plant. It develops in contact with the aphitoic zone, reached by the waves, and with the psammophilous perennial formations of the inland and represents the prevailing species of the pioneer communities conductible to the association Salsolo kali-Cakiletum maritimae Costa e Manzanet 1981. These communities represent the first stage of colonization and construction of the dunes to protect the sandy coasts that however cannot survive the heavy human stamping, as is the case for the tourist beaches. 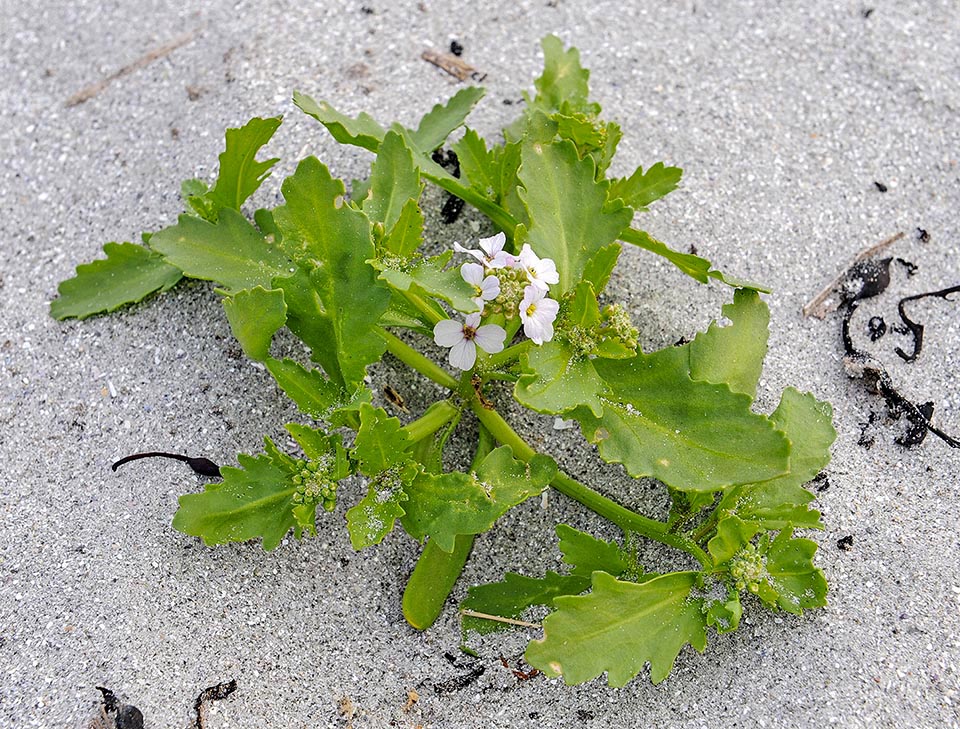 Cakile maritima is a succulent annual herbaceous species with an about 40 cm taproot. The size of the single parts is quite variable, depending on the growth conditions. The growth reduces in conditions of extreme nutrients scarcity, excess of water in the soil or lack of room.

The stem is prostrate or ascending, ramified, of 15-45 cm, succulent when young, corky with age. The stems, very ramified, can produce forms similar to small bushes of up to 1 m of diametre. The partial planting is generally advantageous because it allows the formation of new vertical branches from the axils of the prostrate stems, thus increasing the number of flowered buds.

The leaves are alternate and fleshy to limit the transpiration, to resist the saltiness and to give the plant a good reserve of water. The lower ones (3-6 cm) are petiolate, entire, obovate to pinnatifid, with eltire or toothed lobes. The upper leaves are entire and sessile.

The flowers are present all over the year, but more from April to October and grouped in inflorescences of dense racemes on the main stem and on the branches. They can measure up to 25 mm of diametre and are very fragrant, formed by four very close (3-7 mm) petals, green-yellowish, and four 6-10 mm petals, spatulate with claw, of white, lilac or purple colour, and long basal hairs. The androecium is formed by six tetradynamous stamens. After the entomophilic pollination, the perianth falls leaving the ripening fruits stuck to the stem by 2-4 mm long thick pedicels. 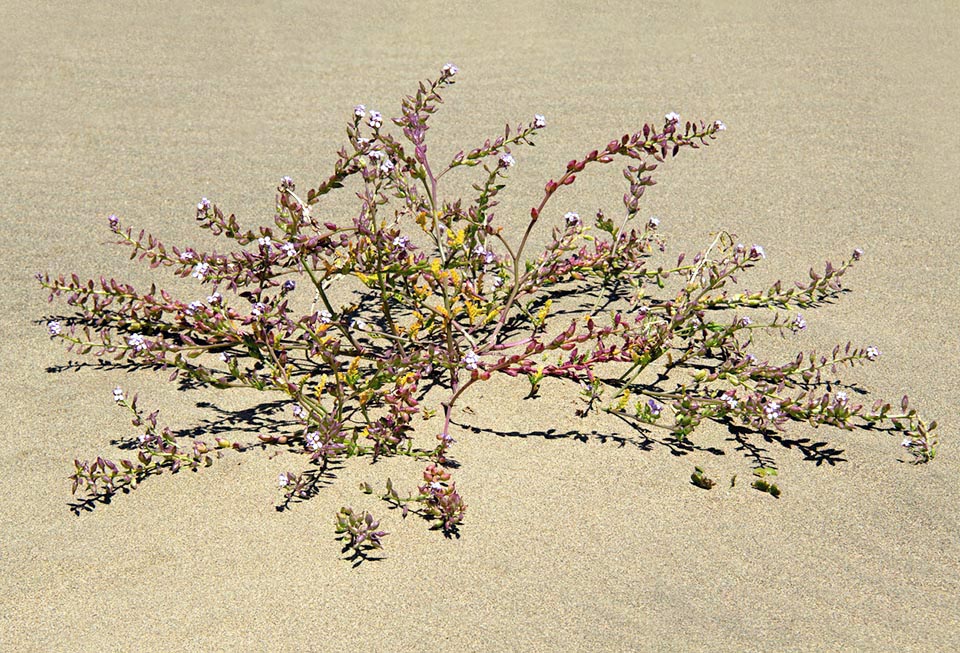 Here it is loaded with fruits and also some flowers. The lower branches root touching the ground and create new plants © Sandy Steinman

The fruit is an indehiscent (biloment) 20-25 mm silique, formed by two different monospermic articles, green and fleshy when unripe, brown, hard and corky when ripe. The upper one, the biggest, has an ovoidale or conical shape and is deciduous. The lowest one, obconical-rhombic, remains attached to the mother plant. The dispersion of the upper articles occurs thanks to the wind and the sea, because floating.

This peculiar mechanism allows the species to diffuse far away by means of the sea and in the meantime to leave it close to the place previously occupied. The two segments silique represents the tendency to the reduction of the organs that takes place during evolution.

The 2,3-4,7 x 1-2,5 mm seeds are oblong, wrinkly, of brown colour. The embryo, that fills up completely the inside of the seed, is pleurorizic with a protruding radicle placed against the margin of both cotyledons (accumbent cotyledons) The germination takes place with the raising of the temperature and the leaching of the salts caused by the rains after the spring tides.

The reproduction of Cakile maritima is strictly annual and depends totally on the seeds for its survival. The normal lifespan of the plant in nature is 4-5 months, however, exceptions may be noted. Furthermore, has been observed the absence of mycorrhizae and is to be put in relation with the presence of glucosinolates (glucosidic compounds containing sulfur) inside the tissues. Despite the phenotypic plasticity of the stem and of the leaves the chromosome number (2n=18) is constant in all studied individuals. 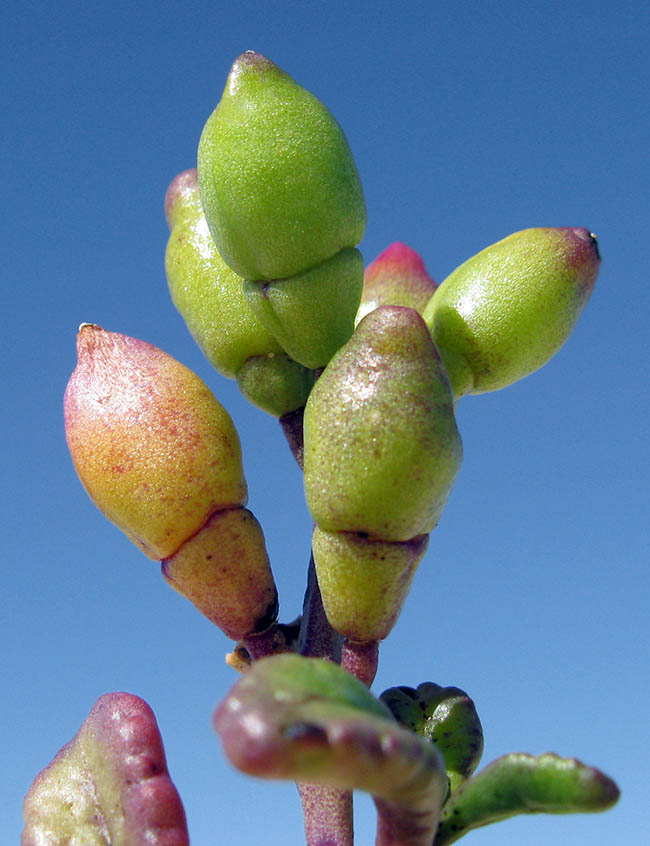 But this species’ winning card, edible and with medicinal virtues, is given by the fruit that ripening breaks in two. The lower part cares the local dispersion, whilst the upper, floating, colonizes other shores © Harry Rose

The natural distribution of the species of the genus Cakile shows that they have evolved after the closing of the Tethys Sea, in the Pliocene, even if the palynological evidence is missing.

The extracts of leaves have an antioxidant action and, in cosmetics, are utilized for skin care. With the leaves infusion it is possible to cleanse the fatty skin and the infusion of the flowered cymes is a good anti-dandruff product.

The Sea rocket can be cultivated on a small scale for the utilization of its young leaves in mixed salads having a typical salty and slightly bitter taste but rich in vitamin C.

The leaves and the young branches are good for being boiled together with other spontaneous grasses and can be sauté in a pan with garlic and oil, or, with the addition of tomato and chili pepper, can be prepared with tasty pastas.

The seeds contain an oil that can be employed like that obtained from the white mustard (Sinapis alba L.).