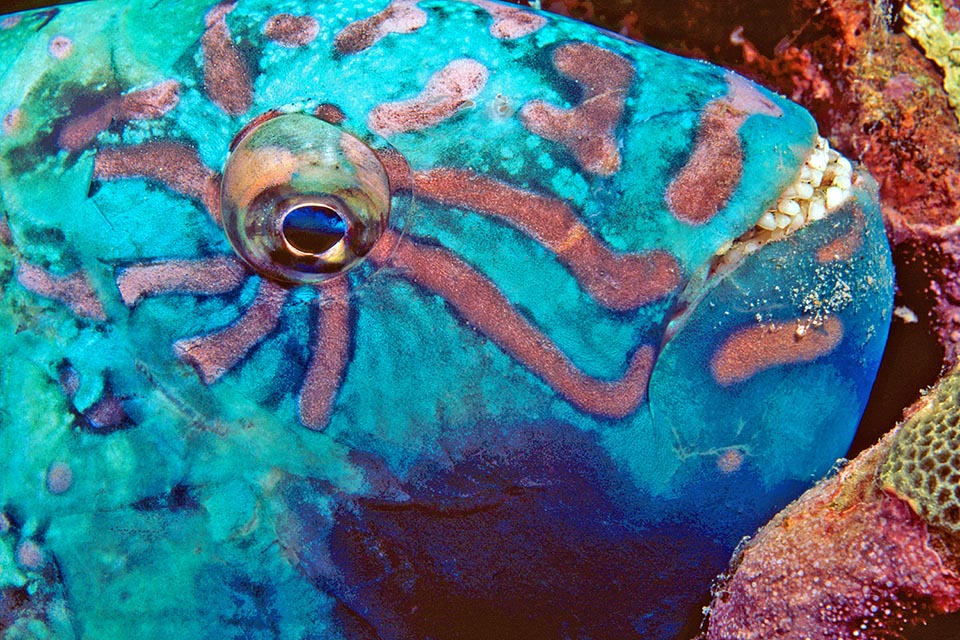 Calotomus carolinus males are easy to recognize, at first sight, due to the radiated design around the eyes © Keoki Stender

Mostly known in the various languages as Carolines parrotfish or Starry-eye parrotfish because of the radiated design around the eyes, Calotomus carolinus (Valenciennes, 1840) belongs to the class of Actinopterygii, the ray-finned fishes, to the order of Perciformes and to the family of Scaridae, the so-called parrotfishes, grouped in a ten of genera and about one hundred species.

The lively colours in fact lead to thinking of the tropical colourful parrots, and like them have usually a robust beak formed by the fusion of the teeth on both jaws for cleaning the reef from the encrusting algae. 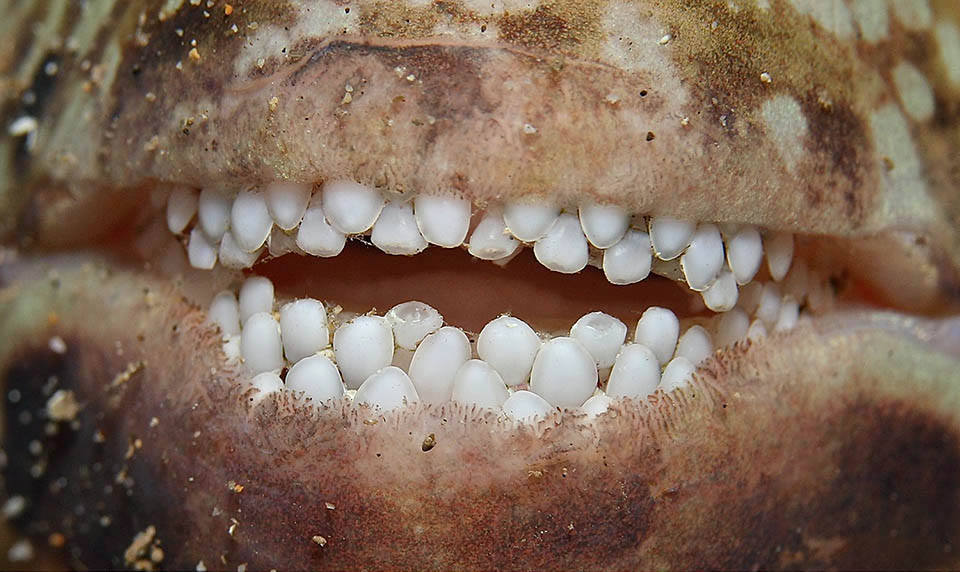 Unlike other species of parrotfishes, Calotomus carolinus, that here looks like smiling for a picture, raising the partially covering gums, moreover, does not have the teeth fused to form a beak. Even if at times scrapes the encrusting algae, it eats, in fact, more consistent species and phanerogams it cuts, like scissors, with his imbricated teeth © Scott Rettig

But in Calotomus carolinus this fusion did not occur, and the maxillary teeth are still there, to severe sharply, like scissors, various and more consistent benthic algae, like the roundish ones of the genus Padina and the phanerogams of the seagrass meadows.

The name of the genus Calotomus, originated, in by chance, from “καλός” (kalos), and “τομος” (tomos), sharp, with clear reference to the perfect cuts they do thanks to the imbricate teeth, whilst the specific term carolinus reminds us, in Latin, that this is a fish frequent in western Pacific, in the Caroline Islands, the location indicated by Valenciennes. 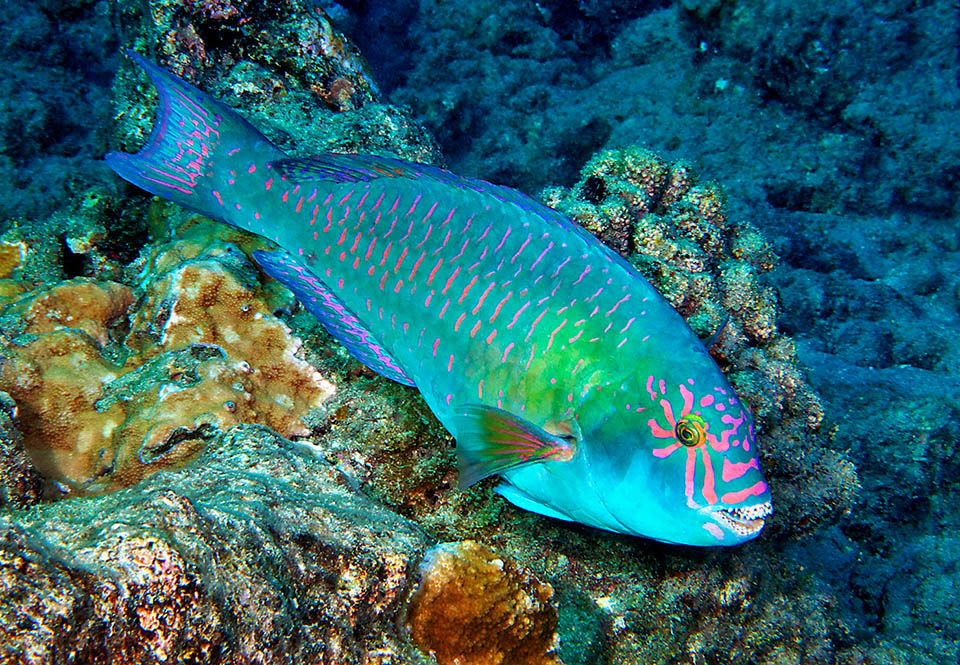 Here a male in all its glory. The pinkish patterns of the head are resumed by the hatchings on the fins and the vertical ones of the scales © Keoki Stender

The distribution of this species is much vaster. It does not limit to Micronesia and goes swimming in almost all tropical Indo-Pacific waters.

Replaced in the Red Sea by the analogous Calotomus viridescens, we find it, indicatively, starting from the Gulf of Oman and the Gulf of Aden, along the African coast, in Kenya, Tanzania and Mozambique up to South Africa. 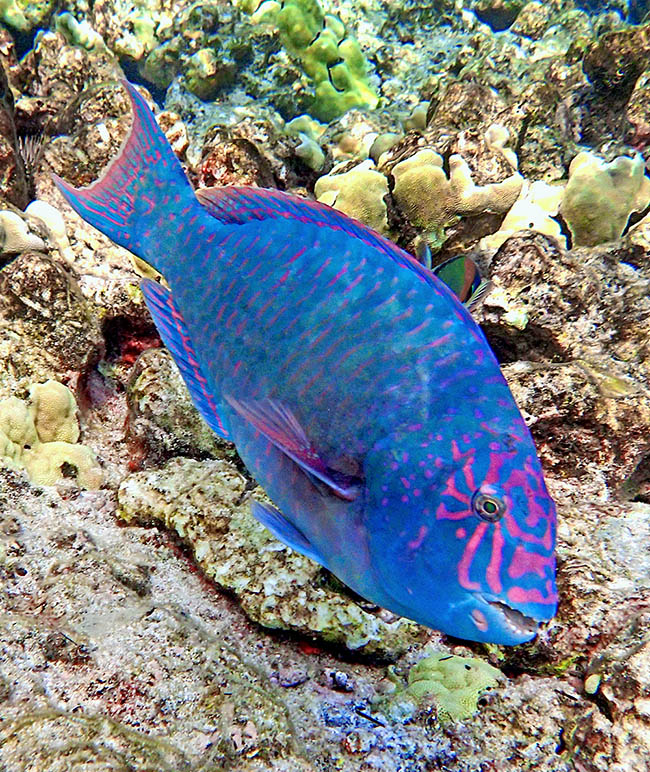 The background colour may change according to circumstances but the typical starry drawing is always well visible © J. Thomas Barnes

It is present in the Réunion, Mauritius, Seychelles, Chagos, Maldives and Cocos islands, along the coasts of Thailand, Indonesia, Timor-Leste, Papua New Guinea, Australia, Solomon Islands and New Caledonia.

Northwards, it has colonized the waters of Palau, Philippines, Taiwan, RyuKyu and of South Japan.

Eastwards, we find it in the Ogasawara Islands, northern Marianas and Guam.

It is frequent in Micronesia, with the above mentioned Caroline Islands of Valenciennes, the Marshall Islands, Kiribati, Samoa, Niue, Tonga, Cook, Tahiti, French Polynesia, Marquesas Islands, Pitcairn, and, finally, the Galapagos. Further north, it has reached the Johnston Islands, Johnston Atolls, the Hawaii, the Revillagigedo Islands and the Mexican coasts.

Although sightings have been reported at around 70 m of depth, Calotonus carolinus is a diurnal benthopelagic fish that usually goes swimming just below the ebb tide limit, among rocks rich of algae and the madreporic formations that run alongside the sandy and detrital bottoms where do grow the phanerogams it eats, plants notoriously in need of light.

The body of the adults, little compressed laterally, can exceed half a metre, with the back relatively high and a pronounced ventral arch.

The body is massive, the snout is elongated with a profile that recalls the characteristic beak-like shape of the Scaridae and lips that hide a good part of the teeth. But here, as we have seen, the maxillary ones have not fused to form two big plates and appear arranged interlocking: one row at the top, with 1-4 canines at the bottom, and one row beneath, reinforced on the front by other rows of overlapping teeth.

Here, the pharyngeal ones, unlike the classical parrotfishes, that grind madrepores producing sand, serve only for crumbling the algae that they graze whole, cutting them and tearing them off at bunches with violence. 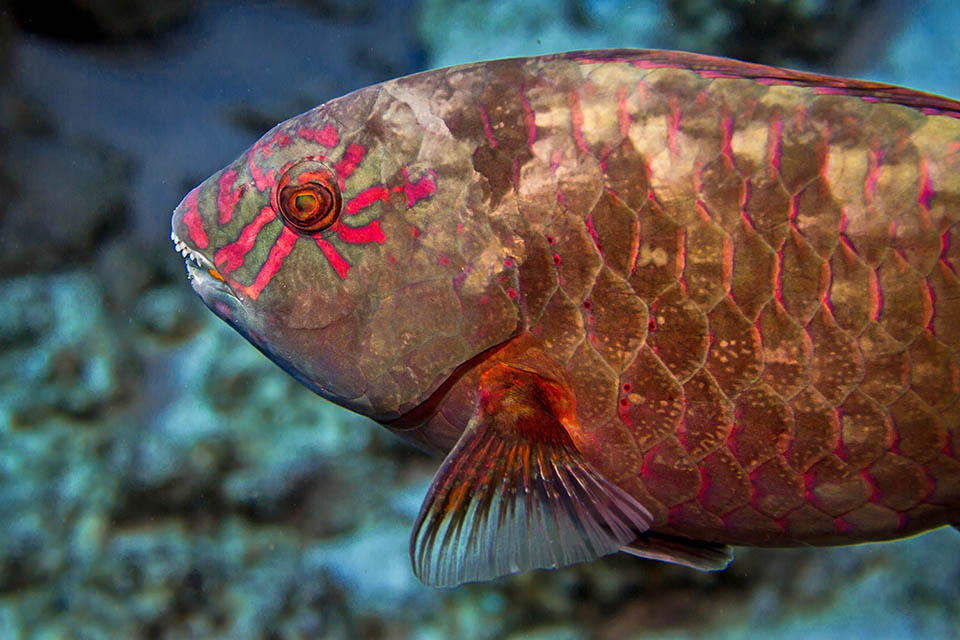 Here, for instance, the background colour is reddish brown and the rays, more intense, are emphasized by a thin black outline. To note the big scales, typical to scarids © Brian Cole

The pelvic fins have 1 spiny ray and 5 unarmed and the caudal, rounded and then truncated in the young, is slightly lunate in the adults.

As normally happens in the parrotfishes, the livery of Calotomus carolinus is extremely variable depending on the age, the sex and the mood of the fish. 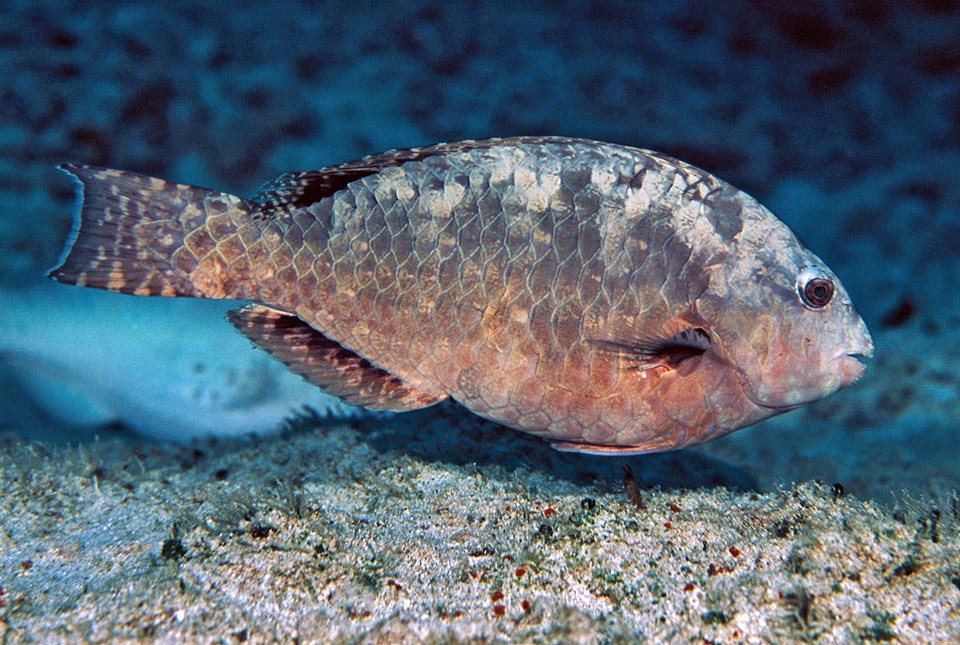 Females, by comparison, have a mottled reddish brown livery much more stable that has probably originated the name of Marbled parrotfish © Keoki Stender

The males are unmistakable with those intense pink rays radiating from the eye and analogous bands on the chin and the snout. A characteristic pattern that stands out, always visible, from the blue, turquoise, green or reddish-brown background colour the fish adopts depending on the circumstances. 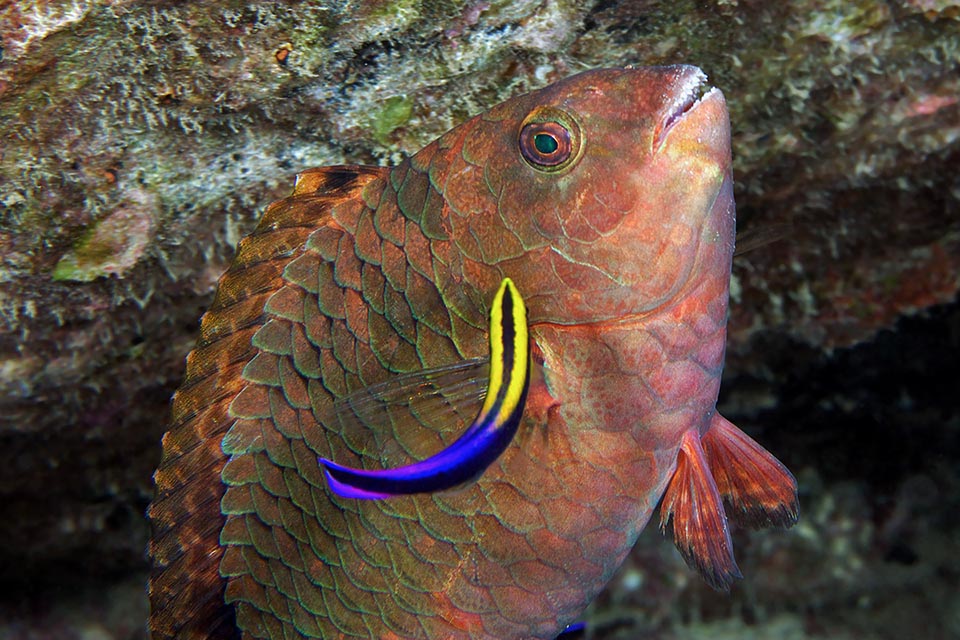 Relaxed female with a Labroides in a “cleaning station”, one of the many sites in the seabed the big fishes visit to get the skin parasites removed © Keoki Stender

As often occurs in the parrotfishes, also Calotomus carolinus has a night livery with vast mimetic clear and black spots on an emerald or turquoise background. However, it does not seem, unlike other scarids, that this species fabricates a protective bubble of mucus where to spend the night.

The adult females are rust brown, pinkish on the belly and the pelvic, with groups of clear scales, grey or balck, changeable for a good mimicry for a marbled effect, hence also the vulgar name of Marbled parrotfish. 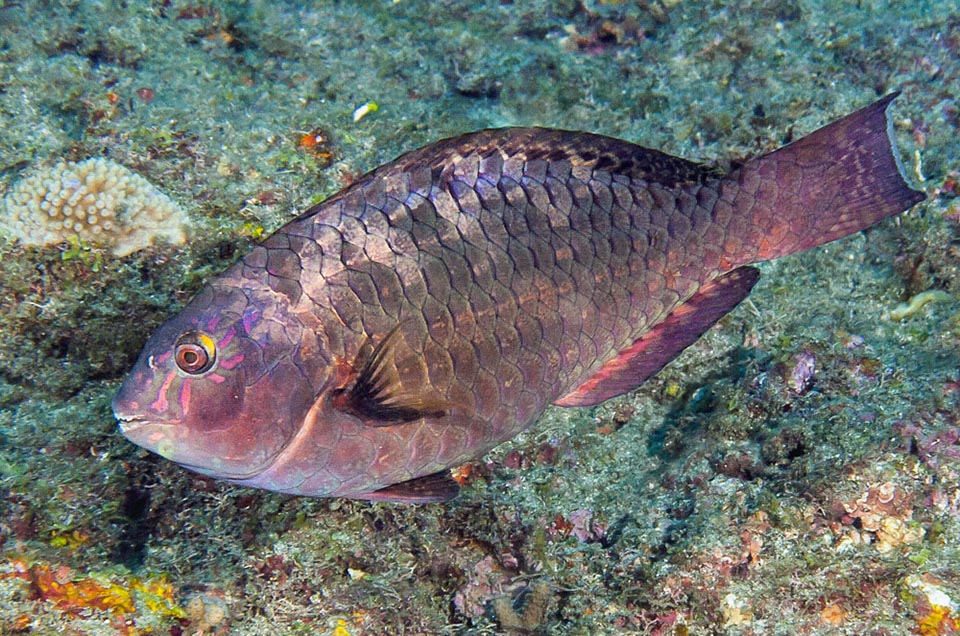 Provisory livery. Calotomus carolinus in fact is a monandrous proterogynous hermaphrodite species, with females that, once got a certain size, transform in males © Francois Libert

Calotomus carolinus lives isolated or in small schools grazing in the submarine prairies of Syringodium isoetifolium or Cymodocea rotundata. They swallow them with the organisms associated, as occurs with the algae of the genus Pasina and those growing on rocks and dead corals. 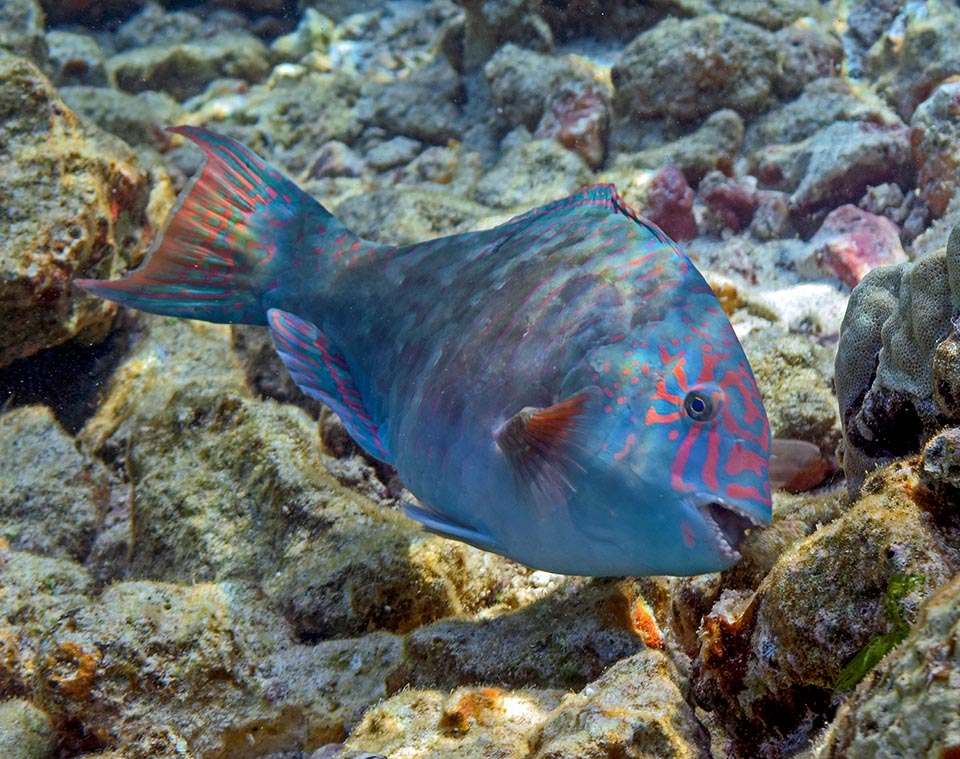 This had to be hungry to gnaw the encrusting algae. Or, maybe, is at the end of the meal, on the right there is a remnant of green alga © Kris Bruland

It is a proterogynous monandrous hermaphrodite species, that is, with females that once reached a certain size, transform into males.

Therefore, there would not be, as happens for Scarus psittacus, some primary males, as such since their birth, with a livery like the females.

In the Aldabra Atoll, in January and in July, it has been observed several times the reproduction at ebbing tide on the outer side of the reef. 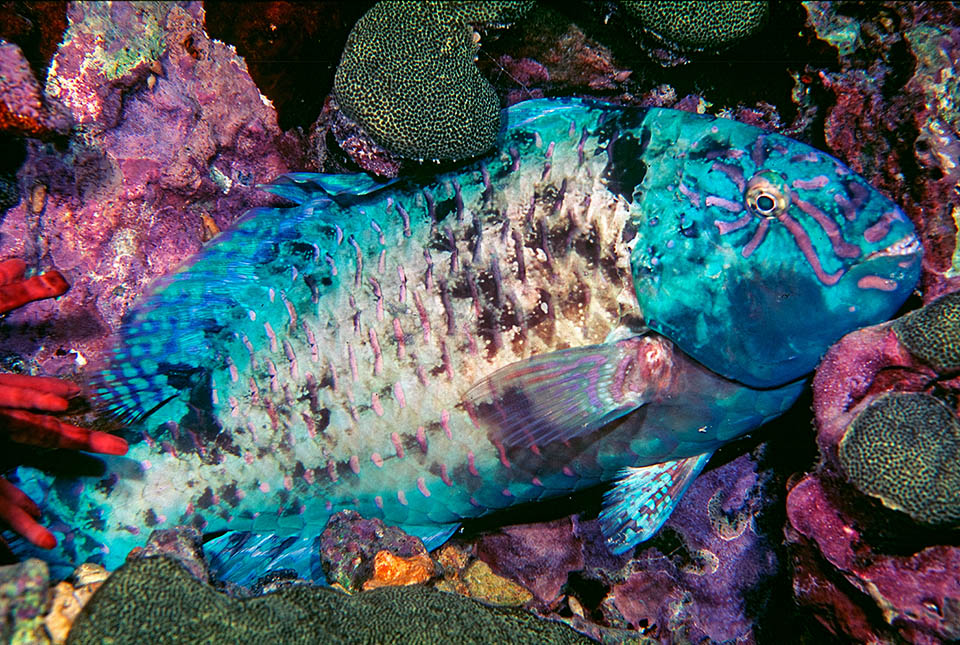 The male’s night livery is dramatic. A mimetic palette in the colourful world of the corals © Keoki Stender

Mating is preceded by visual cues.

The males who wear a particular nuptial livery with white body below and grey blackish above having white dotting and grey yellowish bars towards the tail, quickly turn around the female ready to lay the eggs.

If this one agrees, the betrotheds go up, swimming in circles, towards the surface where the waves disperse the eggs better. 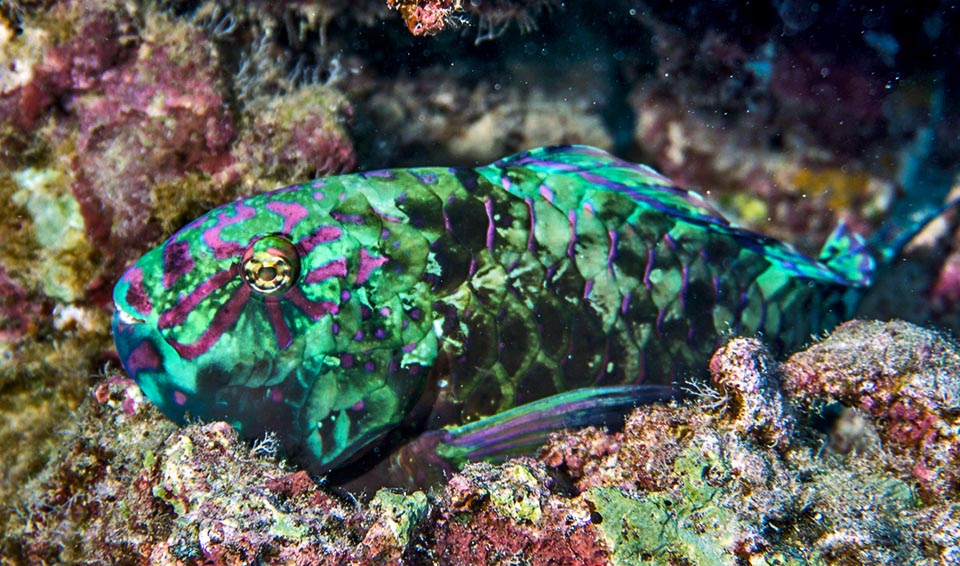 Some have diverse tastes and prefer emerald to turquoise backgrounds. In any case, they don’t wrap, like other Scarids, in a protective night bubble © Yuri Khripin

At the height of the excitement, the head of the male becomes the clearest part of the body, of a luminous greenish yellow, so much that the characteristic ray pattern almost disappears.

This is the visual cue awaited by the female, the right moment for releasing the eggs, immediately and entrusted to the currents. 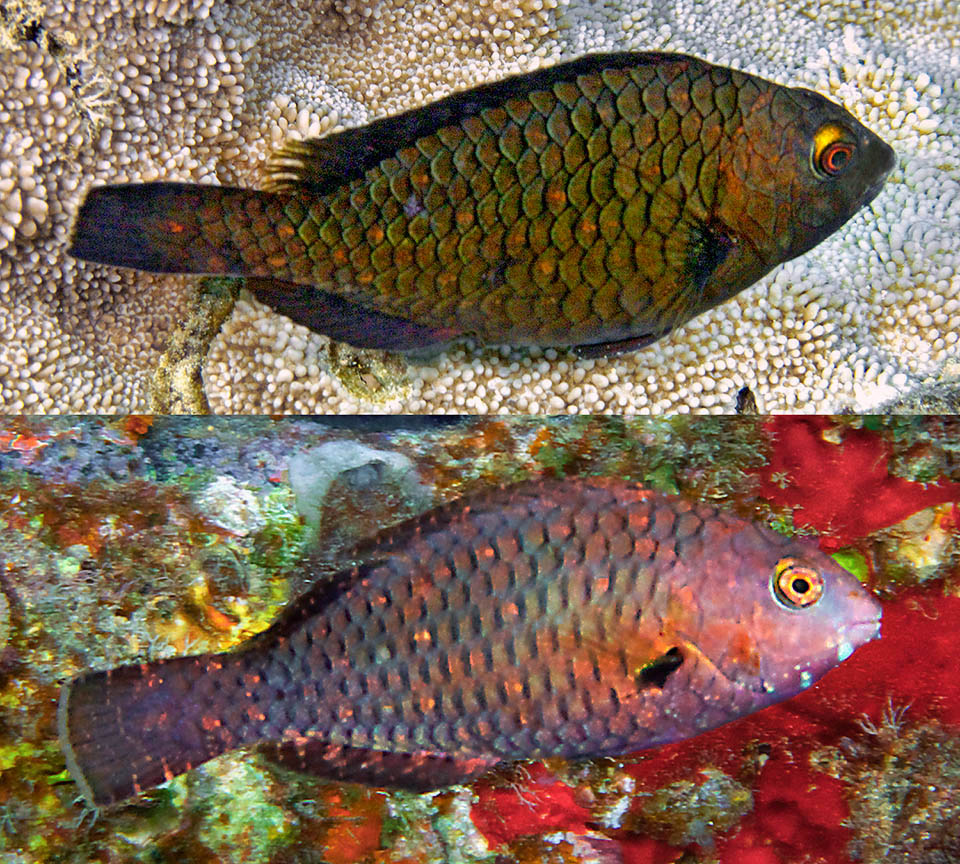 To reproduce the pairs swim in circles to the surface. At the time of emitting the gametes the male’s head becomes the clearest part of the body. Eggs and larvae are pelagic. Initially the small fishes have pale dots lined up on the sides and a background colour very variable from green to the dark brown or reddish © Keoki Stender

The larvae are pelagic till about 12 mm, when they begin to head towards the bottoms. They are transparent, with several mimetic speckles, black and one white, on the first two rays of the dorsal fin.

While growing, the small fishes darken with clear dots lined up on the sides and a very variable background colour that may instantly pass from the green to the dark red, to the dark brown, or to a greyish mimetic drawing with almost white and black zones.

Calotomus carolinus is at times fished for local consumption, but by sure is not an endangered species. Food is not missing and the resilience is good with a possible doubling of the populations in 1,4-4,4 years. As a consequence, nowadays, in 2021, the vulnerability index of the species is very low, marking just 24 on a scale of 100. 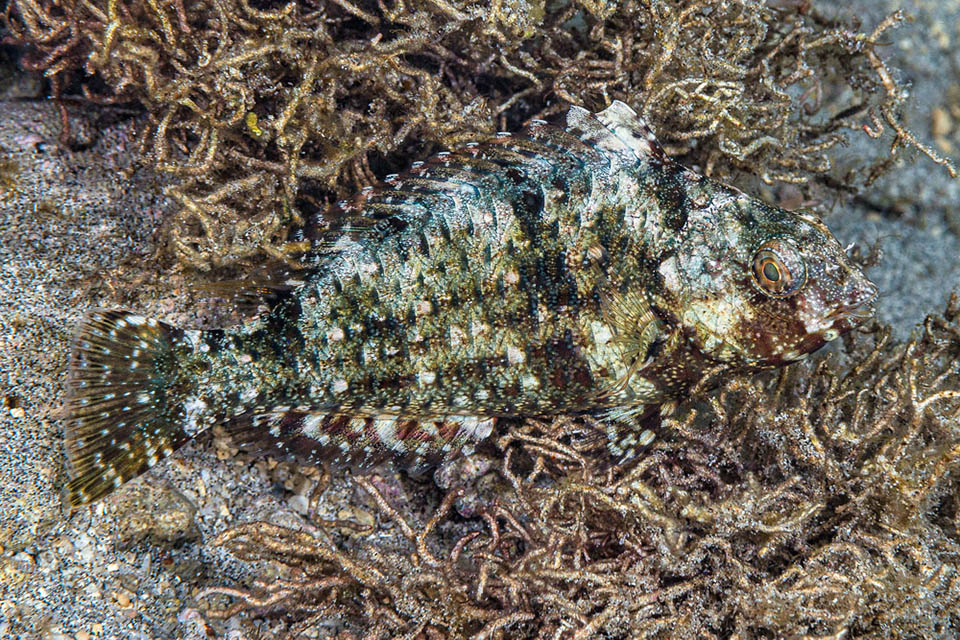 These colour changes are instantaneous and as we can note in this image, they show already incredible mimetic capacities © Francois Libert

Calotomus carolinus was last modified: May 3rd, 2022 by Peppino