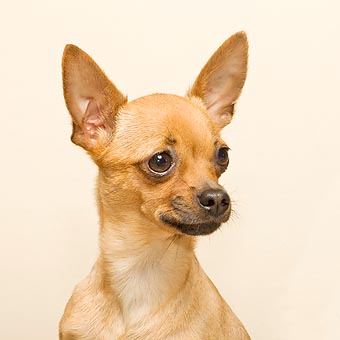 By sure, the smallest breed of dog, but with a surprising charge of sympathy and of energy.

The chihuahua has very ancient origins: native to Mexico, it takes the name from the homonymous city of Chihuahua.

It was imported in Europe probably during the Spanish conquest and was crossed with similar dogs of Aztec origin.

Known all over the world, it exists in two varieties of coat, one with short hair and the other which, on the contrary, shows a longer coat with collar, fringes on the limbs, and tail and particular culottes.

All the colours are admitted in this breed and also the combinations which can result, both as shades and as dapples.

The head has a characteristic rounded form and defined, in fact, as apple shaped; at the centre of the skull sometimes there is a fontanelle due to the incomplete consolidation of the cranial bones. 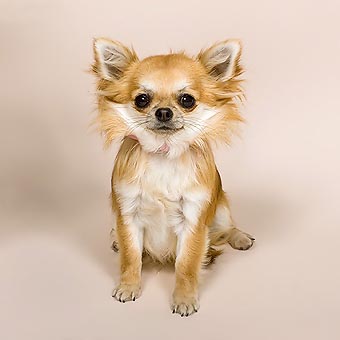 In the last years the breeders who select with skill, are reducing the sizes, in defence of the health of this small but valiant doggy.

The legend tells that, through the molera (in this way is called this area of the skull) the Chihuahuas were communicating with the gods: it was not by a chance that a certain aura of sacredness was conferred to it.

The neck, even if referred to a few kilos dog, is strong; the back-bone is straight-lined and the tail pleasantly raised with the tip turned towards the head. The thorax is well rounded, the limbs lean, the proportions of the trunk show it as slightly longer than tall.

Dog of character, it is rather suspicious with the strangers, whilst it’s loyal and faithful to the master. It is an excellent watchdog.

The reduced dimensions allow the estimators of this breed to take it everywhere and to devote themselves to several specimen, even if not having a garden or wide spaces at their disposal.