The species is native to Brazil (Bahia) where it grows epiphyte on the trees of the coastal rainforest (Mata Atlântica) at low altitudes.

The name of the genus is the Latin substantive “canistrum, i” = basket, with reference to the shape of the inflorescence; the species is honored to its collector, the American botanist Mulford Bateman Foster (1888-1978) who has dedicated his life to the research, study and cultivation of the Bromeliaceae.

The Canistrum fosterianum L.B.Sm. (1952) is an evergreen, herbaceous species, monocarpic (it fructifies only once and then dies), acaulescent, epiphyte, formed by a funnel-shaped rosette, of 20-30 cm of diameter, of numerous leaves arranged to form a central cavity where is collected the rain water.

Linguiform leaves, ovate and dilated at the base, 18-25 cm long and 3-4 cm broad, with margins provided with brown spines 2-4 mm long and pointed and spiny apex, of glossy green color above, with scattered brown spots and densely covered by microscopic grey scales below.

The inflorescence, at the center of the rosette, is formed by an erect floral scape, 20-25 cm long, ending in a compound spike, short, compact, of 4-5 cm of diameter, surrounded by imbricate ovate bracts with pointed apex of red-orange color, 5-7 cm long and 5 cm broad, forming a sort of a cup. Erect flowers with three disuniform white sepals faded of pink at the apex, 1,5 cm long, 3 white petals, 2,5 cm long, 6 stamens arranged in two lines of three inside the corolla, and white inferior ovary 1 cm long. 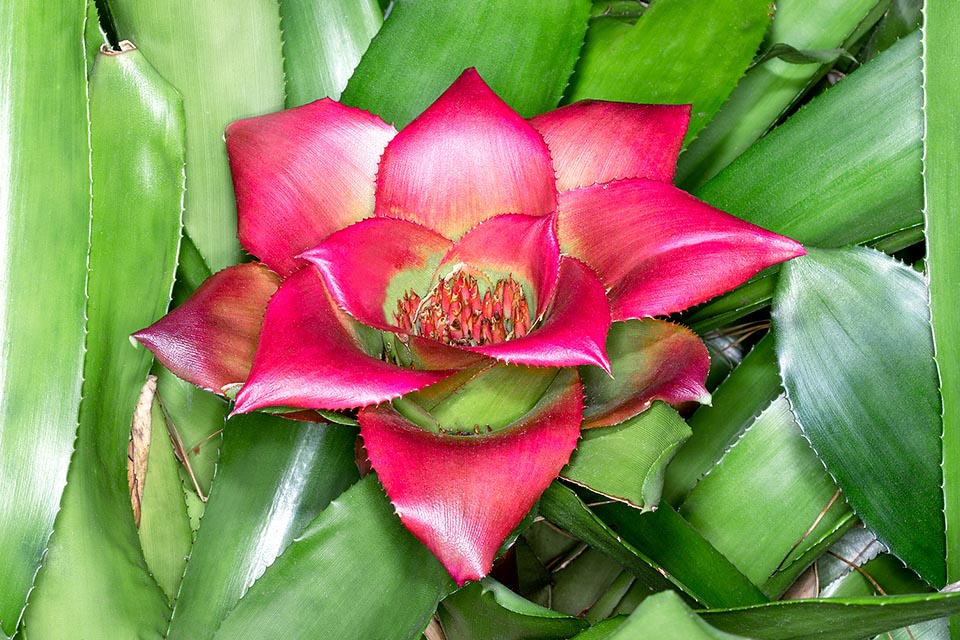 The Canistrum fosterianum is an epiphyte of the Mata Atlântica, the Brazilian coastal rainforest. The rosette, with funnel-shaped leaves of 20-30 cm, creates a central cavity where gathers the rain water. The inflorescence is a compound spike, short and compact, of 4-5 cm of diameter, surrounded by flamboyant bracts with pointed apex © Giuseppe Mazza

The fruits are pinkish berries containing numerous fusiform seeds of brown color. After blooming the plant stops growing and after a rather long time withers completely, but in the meantime has transferred nutrients to the new plants produced at the base.

It reproduces by seed, put superficially on aerated and draining organic loam, maintained humid at the temperature of 24-26 °C, by division of tufted plants and through the new plants produced at the base that may be detached when they have reached a dimension equal to at least one third of that of the mother plant.

Species of easy cultivation, with long lasting blooming, cultivable in open air in the tropical and humid subtropical regions, its cultivation may be tried, in sheltered position, in the milder warm temperate zones where temperatures close to 0 °C are short lasting exceptions. It can be utilized as epiphyte on the trees as well as terrestrial on very aerated and draining substrata, rich of organic substance, in semi-shaded position, assuring the constant presence of non-calcareous water in the central cavity.

Thanks to its contained dimensions, it well adapts to the cultivation in pot for the decoration of inner spaces, even if not particularly luminous, utilizing substrata with the above cited characteristics, with lowest minimum winter temperatures not under the 15 °C. In presence of dry air and high temperatures, the ambient humidity may be incremented with nebulizations, utilizing non calcareous water at ambient temperature, or placing the pot on a wide saucer filled with expanded clay pebbles or rubble with a layer of water not in direct contact with the bottom of the pot.