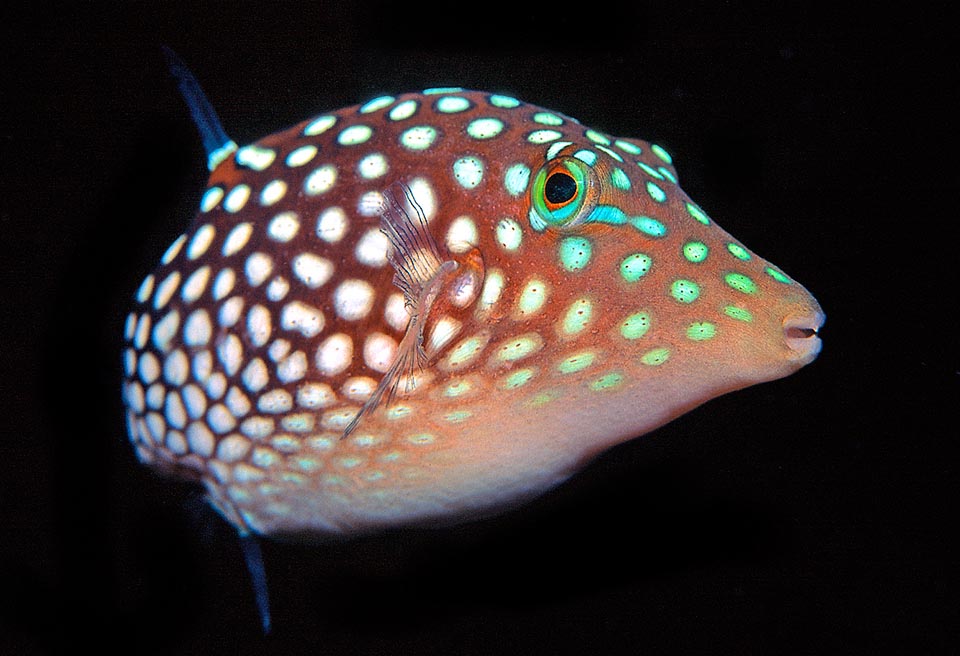 Among the toby, able to inflate of water like balloons to escape predators, the Canthigaster jactator distinguishes for its particularly long conical muzzle © Keoki Stender

The name Canthigaster, comes from the Greek “Κανθήλια” (kanthelia) = basket and “Γαστήρ” (gaster) = belly, due to the capacity of pumping water into the belly inflating it as a balloon. A way to become cumbersome to the eyes of the small predators who, moreover, as in the game of an apple hanging by a thread, will have difficulty to bite it.

The specific name jactator in Latin means “boaster, braggart, loud-mouth, windbag”, perhaps also here more than to the showy livery, there is again a reference to the capacity of inflating. 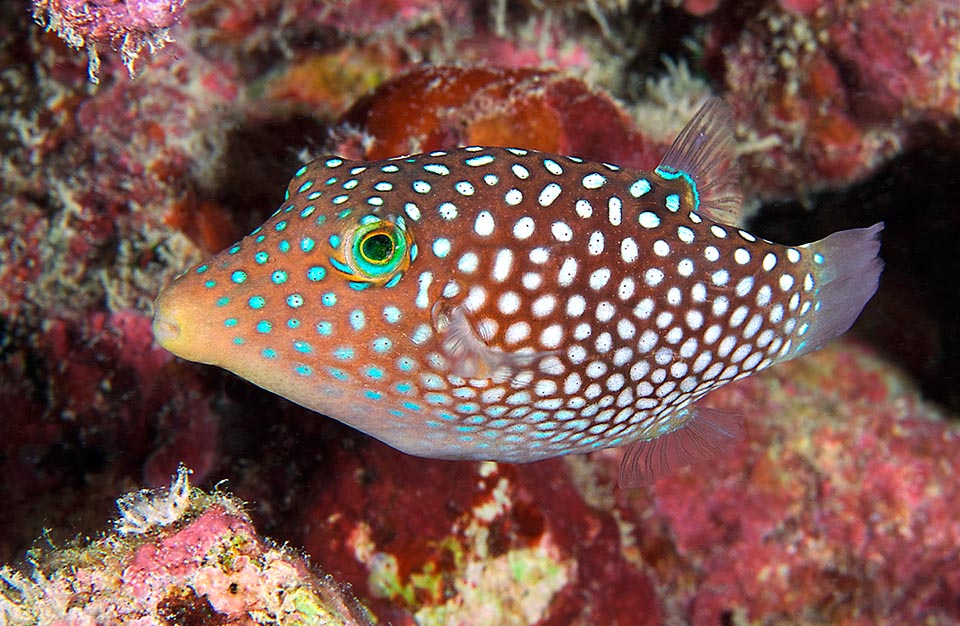 It lives in the Pacific tropical waters, native to Hawaii but also to the faraway waters of Taiwan © Keoki Stender

The Canthigaster jactator is a fish of the tropical Pacific Ocean with an epicentre at the Hawaii Islands, as evidenced by the common name of “Hawaiian whitespotted toby”. We find it, however, besides the near atoll of Johnston, also native to the distant waters of Taiwan, with a distribution southwards up to the Batan Islands, the Babuyan and Viet Nam, and northwards up to the Ryukyu and Okinawa islands in the south of Japan.

It lives among the madrepore formations, in relatively shallow waters at 10-36 m of depth. Rocky coasts, lagoons and madreporic formations. We find it also on the sandy and muddy bottoms, but much less, probably because they offer less food and few holes where to spend the night and hide in case of need. 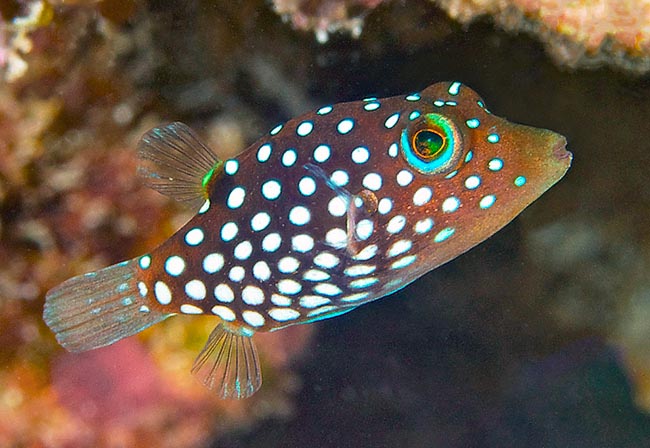 Young specimen. The dots are proportionally bigger, but livery is the same as the adults with green-turquoise eyes © Keoki Stender

It is a small fish of oval and stocky shape, that does not exceed the 9 cm. The architecture is the classical one of the boxfishes, with a small armour, under the skin having no scales, provided of the necessary openings for the yes, the mouth, the fins, the gills and the anus. Confronted to analogous species, here the muzzle is particularly elongated like a funnel, with the mouth situated in advanced position and the characteristic beak of the Tetraodontidae formed by the two incisors per jaw.

The body has a reddish brown background colour, fading to orange towards the mouth and the belly, constellated by clear specklings, elements recurrent in many boxfishes such as, for instance, the Canthigaster solandri, but here the stripes are absent, even if we can note a certain family air in the outline of the dark ocellum at the base of the dorsal fin, whilst the eyes are green or turquoise, the tail is not coloured but is translucent and the body at times displays a slight green fluorescence.

The survival strategies are in any case the same. Fake eyes and dots to confound the ideas, the capacity to inflate and a livery in the mean time mimetic and showy to remind the aggressors, still alive after the experience, that it is a fish endowed of tetrodotoxin, powerful venom elaborated by symbiotic bacteria. 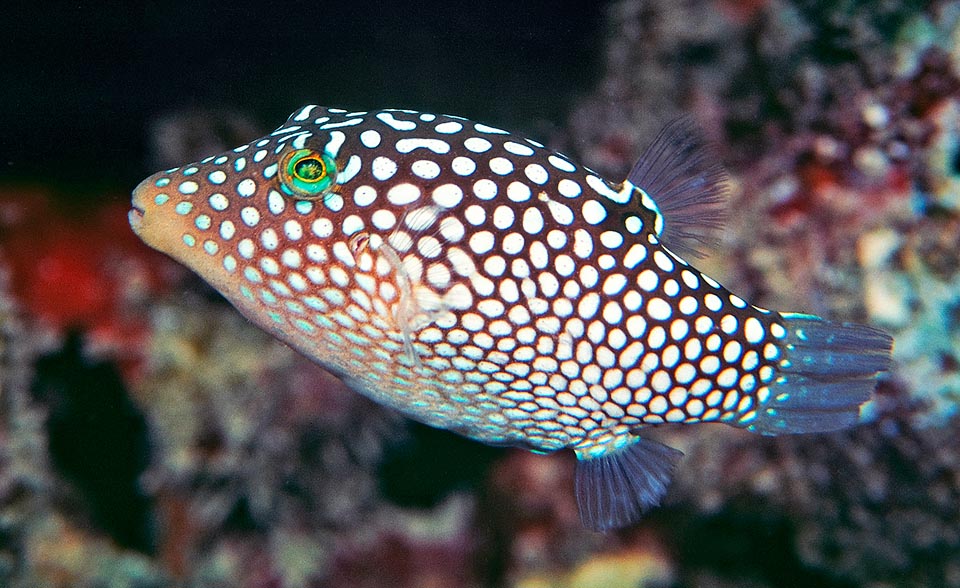 A patrolling adult while surveying its territory. The Canthigaster jactator rarely reaches the 9 cm. It nourishes of algae but is also carnivorous © Keoki Stender

The Canthigaster jactator is a territorial fish living in couple or more often in small groups formed by an adult male and 3-4 females.

The males survey their small kingdom formed by the territories of the females, who, in their turn defend them from the other females, swimming in turn coupled with the one chosen of the harem. These small fiefdoms measure about 1-6 m of diameter and the landscape is carefully checked, to see if something has changed, looking around curious for possible new changes.

They are habitual fishes who know every crevice of the madrepores spending often a deep sleep several nights in the same den. It has been observed that they spend the 50 % of the hours of light swimming in patrol, the 40 % hiding and dedicate only the 10 % of their time looking for food. 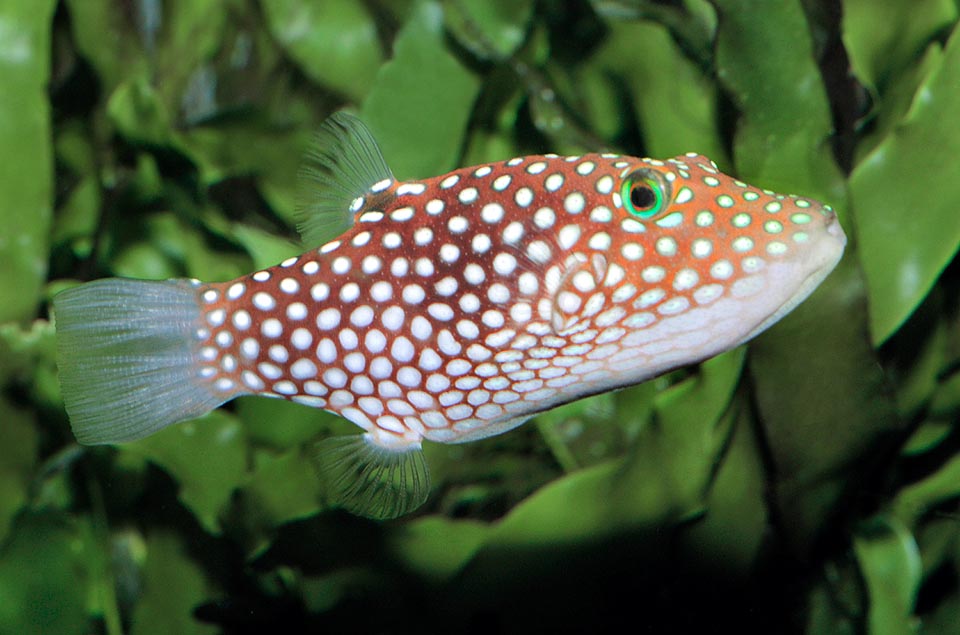 Due to the small size it could be an aquarium jewel, but it is difficult to set and gnaws with typical crescent shaped traces the fins of the other fishes © Giuseppe Mazza

For some they are mainly herbivorous, with the typical fondness of the Canthigaster for the filamentous algae; for others, carnivorous, as that they have seen them nibbling at sponges, corals, tunicates, polychetes, bryozoans, echinoderms and small crustaceans; actually, they are herbivorous that adapt to all, climate changes included. Furthermore, they have a bad habit, inconsistent despite the small size with the aquarium life, that of biting with typical crescent shaped traces, one close to the other, the fins of the other guests of the pool.

When the female on duty is ready, the laying takes place in small grottoes. The spouses literally vibrate with love and the eggs, immediately fecundated, will hatch after a few days.

The resilience is good, with populations that can double in less than 15 months, and now (2019) the vulnerability index of the species is extremely low, marking just 10 on a scale of 100.