The Carangoides bajad (Forsskål,1775) belongs to the class of the Actinopterygii, the ray-finned fishes, to the vast order of the Perciformes and to the family of the Carangidae that counts 30 genera and about 150 species. Marine fishes with the body generally comlpressed on the sides, very fast swimming predators, common in the tropical waters and present also in the Mediterranean.

The genus Carangoides comes from Carangus (an old obsolete taxon, assigned in the past to various membres of the family of the Carangidae and now at times synonym of Caranx) with the addition of the Greek ending “ὄψις“ (opsis) = look. In short, it is a fish resembling a Carangus.

The specific term bajad, gets its origin from the Arabic name of this fish. 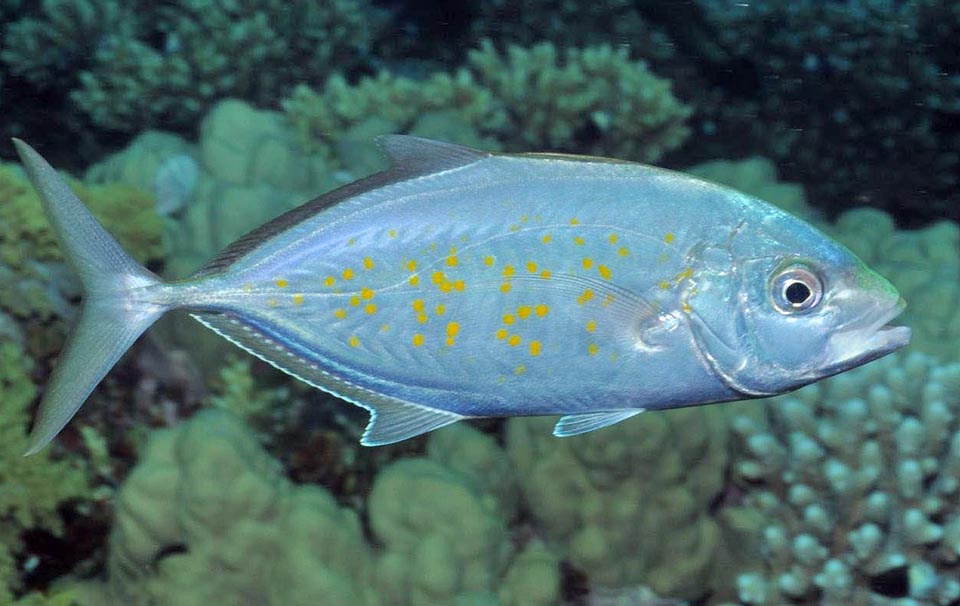 It is a species of the Indian and western Pacific Oceans. Indicatively, starting from the RedSea and the Gulf of Aden. We find it along the coasts of Somalia, in the Socotra Archipelago and in Oman, in India, Thailand, Malaysia, Indonesia, Papua New Guinea and Australia. Northwards, it reaches the Philippines,Taiwan and southern Japan.

It passes over, tireless, looking for preys, mainly the madreporic formations between 2 and 70 m of depth, often on the outer side of the reefs. 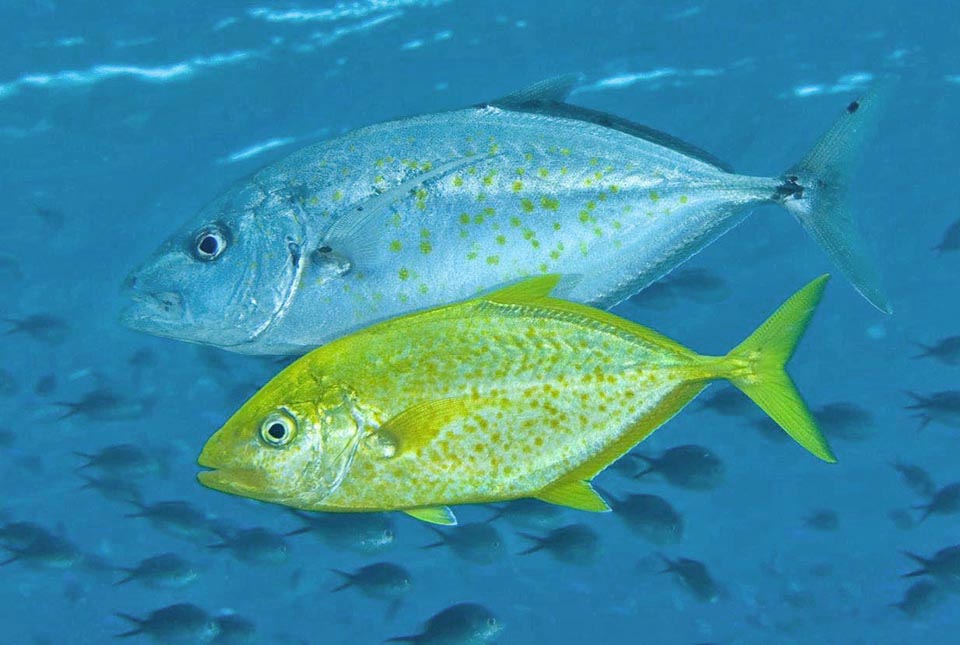 Always with the typical yellow orange dotting on sides, the background colour changes depending on the site and the mood of the fish © Reef Life Survey – Andrew Green

The Carangoides bajad reaches the length of 55 cm, with a record of 72 cm, even if usually it slightly exceeds the 40 cm. The profile of the body, compressed laterally, is fusiform with the belly less convex than the back. 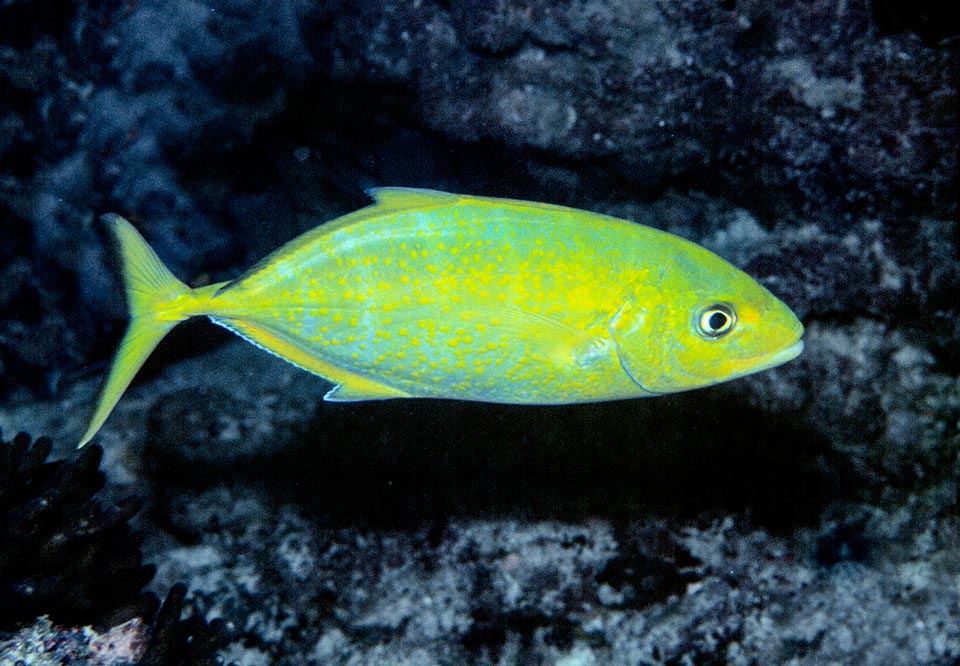 It’s a very fished species in Persian Gulf, with hundreds of tons fished per year for the fish market, but globally is not in danger © Giuseppe Mazza

The livery, extremely changeable, depending on the locationn and the mood of the fish, is mainly silver with a characteristic marked yellow orange dotting on the sides. Some specimens, however, are entirely yellow, maybe also for an emotional reason, and in others the background colour turns very dark, almosy black.

The Carangoides bajad swims solitary or in school predating, hungry, all what it is able to seize with its big mouth: all sort of fishes, and benthic crustaceans. The sexual maturity is reached when of a length of about 25 cm and the fecundated eggs are entrusted to the currents. In the Persian Gulf most of matings occur between June and September and the fishermen have noted the growth rate is faster between November and April. 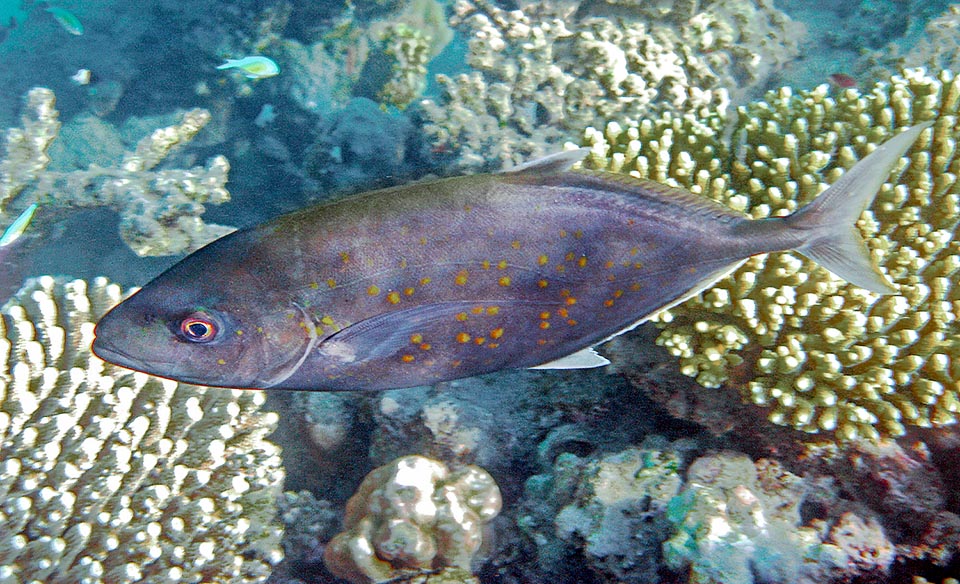 It eats fishes and benthic crustaceans. As well as silver or yellow, the background can be also very dark almost black © Gianemilio Rusconi

In these localities the withdrawal of the fish market is very heavy, with several hundreds of tons per year, whilst elsewhere the fishing is fairly modest, often only sporting of for local market. But, if we consider the population in its whole, considering the vast range and a discreet resilience with possible doubling of the membres in 1,4-4,4 years, the Carangoides bajad is nowadays (2020) not in danger. As a matter of fact, the vulnerability index is low, marking only 27 on a scale of 100.