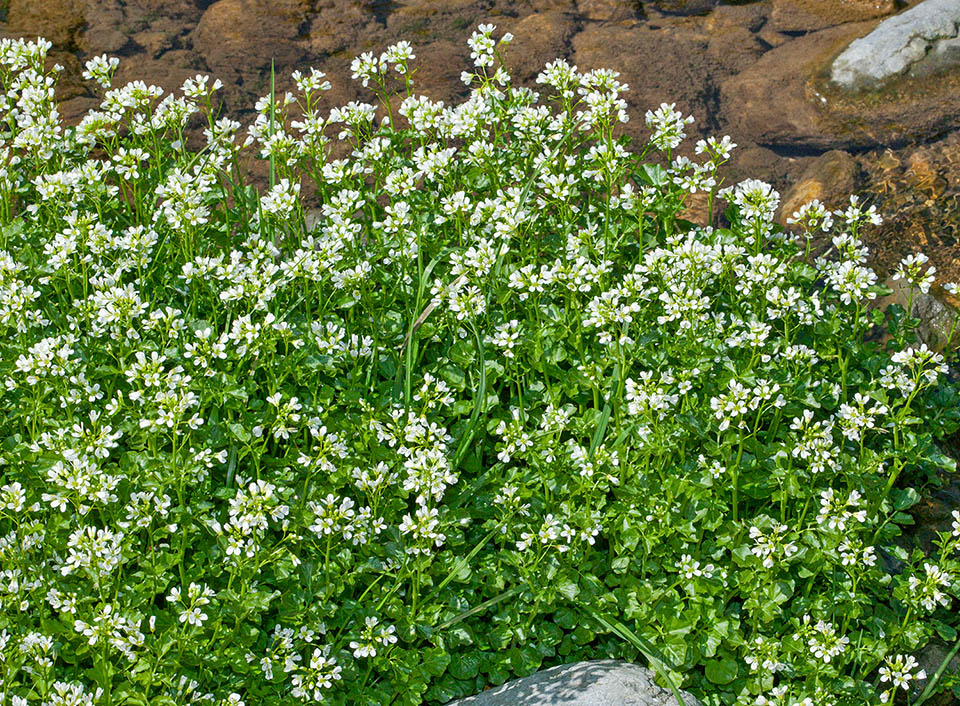 Cardamine amara is a perennial, herbaceous species, rhizomatous, with budding stolons from which raise ascending cylindrical stems, poorly ramified, hollow and glabrous. It grows, even with his feet in the water, along the brooks and near alpine source in most of Europe and of western Asia from 600 m to 2500 m of altitude © Giuseppe Mazza

This species is morphologically very variable, diffused in most of Europe, including Great Britain, up to the Balkans and western Asia. It grows near the sources, swamps, banks of streams and ditches, even in water, from 600 to 2500 m of altitude, rarely found at lower heights.

The name of the genus (Cardamine) is assumed to have derived from two Greek wordings: “kardia” (= heart), and amýno (= to protect), because of the medicinal (cardiotonic) properties that in the old times were attributed to the plants of this genus. The specific epithet “amara” refers to the bitter, sour taste of its leaves.

Commonly, the species is known under the name of “large bitter-cress”.

Cardamine amara L belongs to the tribe Cardamineae that counting 15 genera that have the rootlets usually remaining anchored to the two cotyledons and grow along the parting line of the same, for such reason called “accumbent cotyledons”.

It is a perennial herbaceous plant with oblique rhizomes and with budding stolons covered by hairs from which raise ascending, cylindrical stems, scarcely ramified, hollow and glabrous. The cauline leaves are alternate, imparipinnate, borne by a long petiole, very reduced in the upper ones. The foliar blade has 5-7 segments of equal shape, elliptical, glabrous, with toothed and curved margins, of bright green colour. The inflorescences are loose apical racemes that lengthen during the fructification.

The flowers are regular (actinomorphic), pedunculate, with calyx formed by 4 yellowish sepals, of which the two lateral ones are saccate. 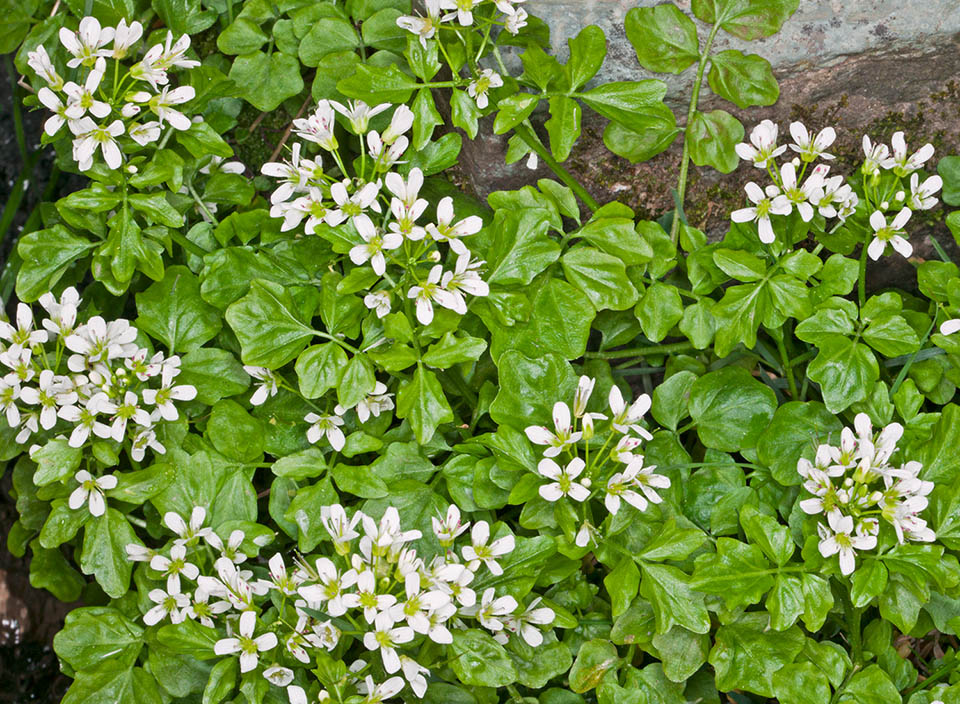 The leaves are edible. They may be utilized to flavour salads and soups, because of their spicy taste quite similar to that of cress © Giuseppe Mazza

The corolla, about 1,5 cm long, has 4 white, at times mottled pink or violet, cross-arranged. The stamens are 6, being 4 long and 2 short (tetradynamous) and the anthers are violet. The style is unique, simple, with stigma having no lateral swellings (capitate) on a syncarpic, bicarpellate, superior ovary.

The plant blooms from May to August. The fruit is an erect, flat, not articulate, 2-3 cm long, silique, with two plain valves having a lengthwise opening from which are released numerous seeds.

These subspecies are well characterized and distinguished morphologically as well as geographically. The subspecies type, diploid C. amara subsp. amara, is the most common and diffused, and is found in most of its range. The subspecies C. amara subsp. austriaca Marhold is met only in eastern Alps and in adjacent areas. The morphometric and molecular investigations have shown that probably it is a matter of an auto-tetrapoloid of C. amara subsp. amara. This subspecies is found, usually, where C. amara subsp. amara is absent. However, both two do overlap only marginally their range in the western part (eastern Switzerland) and northern (southern Bohemia). They look a lot alike and only the chromosomal number and the combination of various morphological characters, such as the number of leaves, the length of the sepals, the ramification of the stem and, particularly, the diametre of the pollinic granules show the difference. 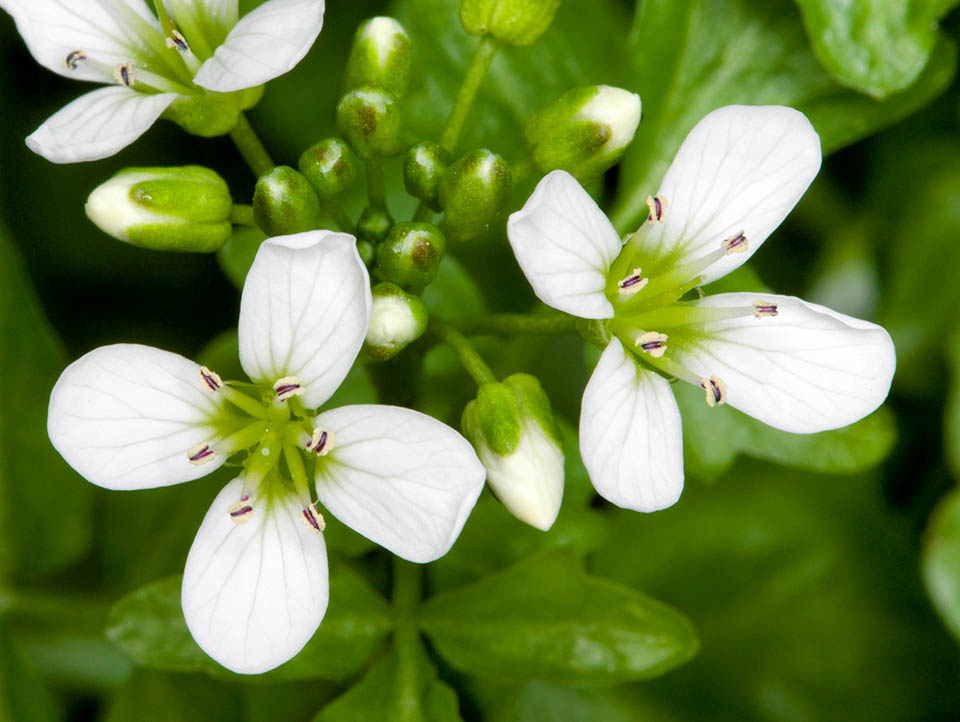 It blooms from May to August. The about 1,5 cm long corolla, has 4 cross-arranged white petals. The stamens have violet anthers. Medicinal virtues © Giuseppe Mazza

C. amara is found also in Finland, that represents the northern limit of its range. C. amara is present also in the regions of North Italy, in Tuscany and in Molise.

The basal leaves of C. amara, especially in spring, were utilized for flavouring salads and soups, thanks to their spicy flavour like that of the cress.

Yore, in phytotherapy, an infusion of this plant was utilized as depurative, diuretic and antianemic. In fact, to C. amara are recognized antianemic, antiscorbutic, diuretic, remineralizing, antidiabetic, hepatic purifying and decongestant of the respiratory system properties.

Cardamine amara was last modified: May 13th, 2021 by Peppino