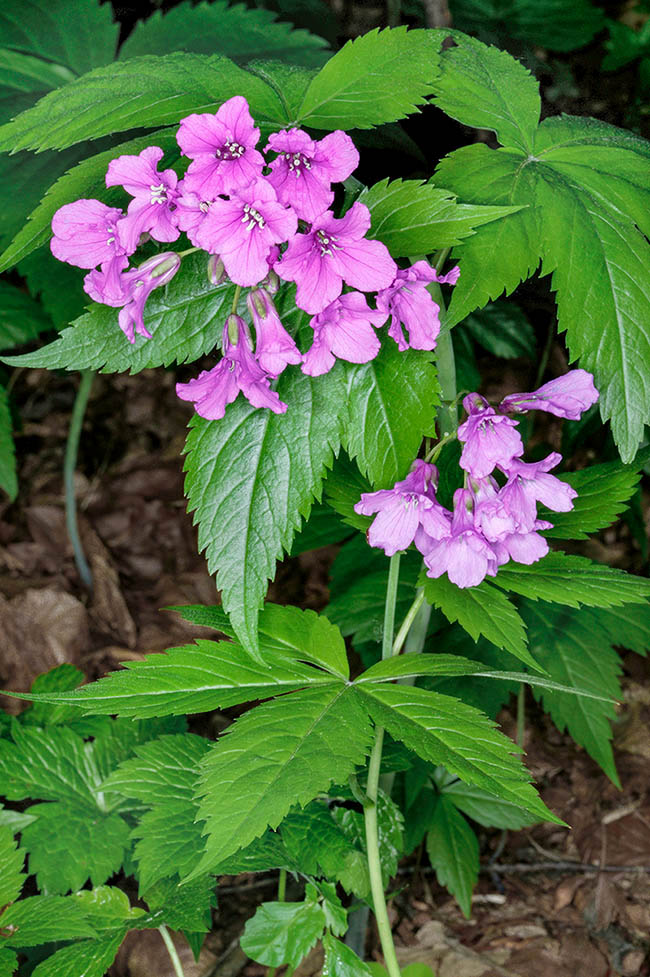 Frequent in the humid beechwoods, on the South Europe calcareous mountain ranges at 500-1700 m of altitude, Cardamine pentaphyllos is a rhizomatous geophyte species disappearing underground, withering, after blooming © Giuseppe Mazza

Cardamine pentaphyllos (L.) Crantz is a species that can be found in the mountain ranges of southern Europe, from the Iberian Peninsula to the Alps, the Balkans and, probably, to Caucasus and Anatolia.

It is found in the humid mixed woods having a deep soil and, especially, is abundant in the beechwoods on calcareous substrata from 500 to 1700 m of altitude, and rarely goes down under the 400-500 m.

The name of the genus (Cardamine) is thought to be coming from two Greek words: kardia (= heart) and amýno (= to protect), because of the medicinal (cardiotonic) properties that in the old times were ascribed to the plants of this genus. The specific epithet pentaphyllos means “plant with five-lobed leaves” due to the shape of its leaves.

This plant is commonly known with the name of “Five leaves billeri”, or “Showy toothwort”, or “Five-leaflet bitter-cress”.

Cardamine pentaphyllos is included in the tribe Cardamineae counting 15 genera having the characteristic radicle remaining usually anchored to the two cotyledons and grows along the separation line of the same, called, for such reason, “accumbent cotyledons”.

It is a herbaceous perennial plant, up to 50 cm tall, provided with a creeping rhizome with small, 5-8 mm long, dark scales, from which raise glabrous stems, not ramified, reddened in the lower part.

The basal leaves are petiolate, alternate, with 5 oval-lanceolate segments, with doubly serrate margin. The caulinar leaves are similar, but with shorter petiole, and decreasing upwards.

The inflorescences are corymbose racemes, with 7-15 flowers on pedicels, elongated at the fruitification.

The flowers are actinomorphic, with calyx formed by 7-8 mm long sepals and corolla with cross-arranged petals, 17-23 mm long, of violet or pale violet, pink or white colour. The stamens are 6, shorter than the petals and the ovary is superior. Blooming takes place from April to June. The fruits are 4-7 cm long siliques.

Cardamine pentaphyllos is a plant utilized in the phytoalimurgy due to its edible leaves that may be consumed cooked as well as raw. When raw, they have a rather bitter taste that decreases if cooked. 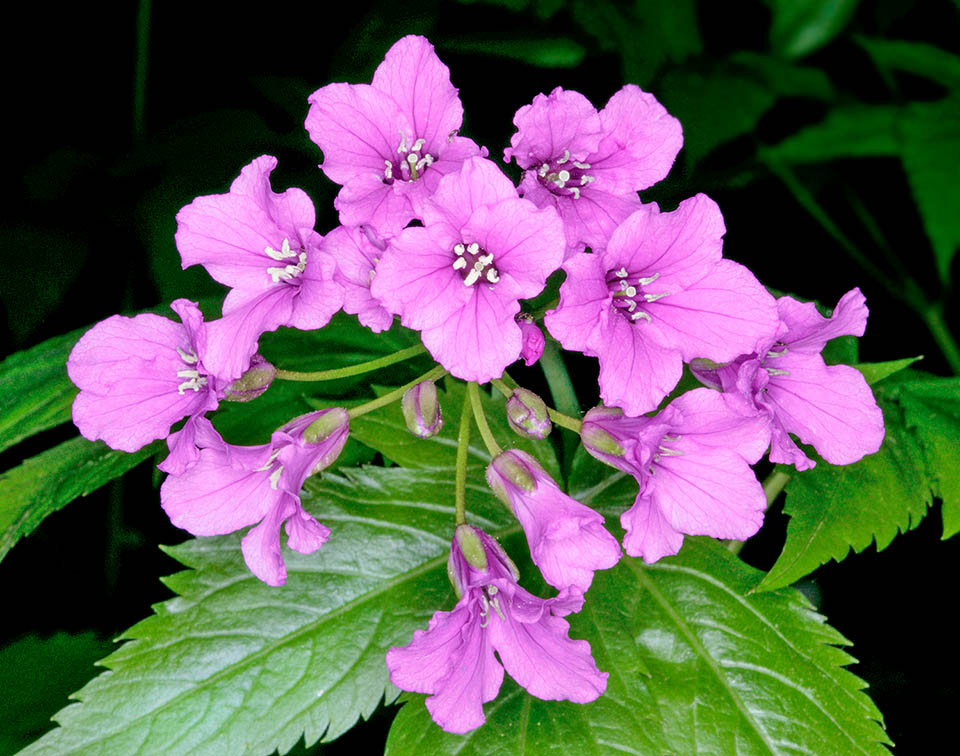 It reappears in spring with new stems. Leaves are edible, and it is also a beautiful ornamental plant, pest resistant, easy to cultivate © Giuseppe Mazza

Because of the beauty of the leaves, of the flowers and for the rusticity of its leaves, this species is grown as an ornamental plant. As a matter of fact, it is cultivated in the open ground in gardens, in balconies or in the courtyards, in containers or in pots. It prefers the shade or the half-shade and a ground, humid, rich if humus, even if it adapts to other grounds, provided kept humid.

Due to the beauty of its leaves, its growing capacities, the stability of its forms, the colour of the flowers and the resistance to the parasites, it has obtained the prize “Award of Garden Merit” of the Royal Horticultural Society.

The plant propagates by seed in spring. The seeds germinate within 1-3 weeks at a temperature of 15 °C. When the plantlets are big enough to be handled, they are to be moved in small pots and cultivated in shade, in a cold environment, for the first two years. In late summer, they can be transferred to the chosen locations.

The plant may also propagate by division of the rhizomes in early spring or in summer, after that the aerial part of the plant has withered. Cardamine pentaphyllos, in fact, is a perennial plant with underground stem (rhizome), that every year emits roots and new stems and for this is classed as “rhizomatous geophyte”. The biggest portions of the rhizome can be planted directly in their final positions, whilst the smallest ones are to be placed in containers to make them root well, and only later on, can be transferred to the chosen destination.

Cardamine pentaphyllos was last modified: May 14th, 2021 by Giuseppe Mazza