The species is native to Aneityum (or Anatom), Futuna and Tanna in the archipelago of Vanuatu where is present in nature, with few individuals, in the rain forest at low altitudes.

The Carpoxylon macrospermum H.Wendl. & Drude (1875) is an unarmed monoecious species, solitary, erect, up to more than 25 m tall, with bottle shaped enlarged base, of up to 50 cm of diameter, that gets thinner in a cylindrical stem, of 25-30 cm of diameter, on which are visible the whitish traces of the junction of the fallen leaves. Pinnate leaves, on an about 25 cm long petiole, strongly and elegantly arched, up to 4 m long; the foliar base, 1,5-1,8 m long, wraps entirely the stem forming a sort of tubular capital of glossy pale green colour. The leaflets, about 70 per side, are linear with acuminate apex, rigid, ascending, arranged regularly along the rachis to form a V, of dark green colour above, slightly paler below, in the median part 1,2-1,8 m long and 3,5-3,8 cm broad.

Inflorescences, on a robust 14 cm long peduncle, under the leaves (intrafoliar), erect, with ramifications of third order, initially enclosed in three deciduous bracts, the outer one (prophyll) of dark green colour, about 70 cm long. 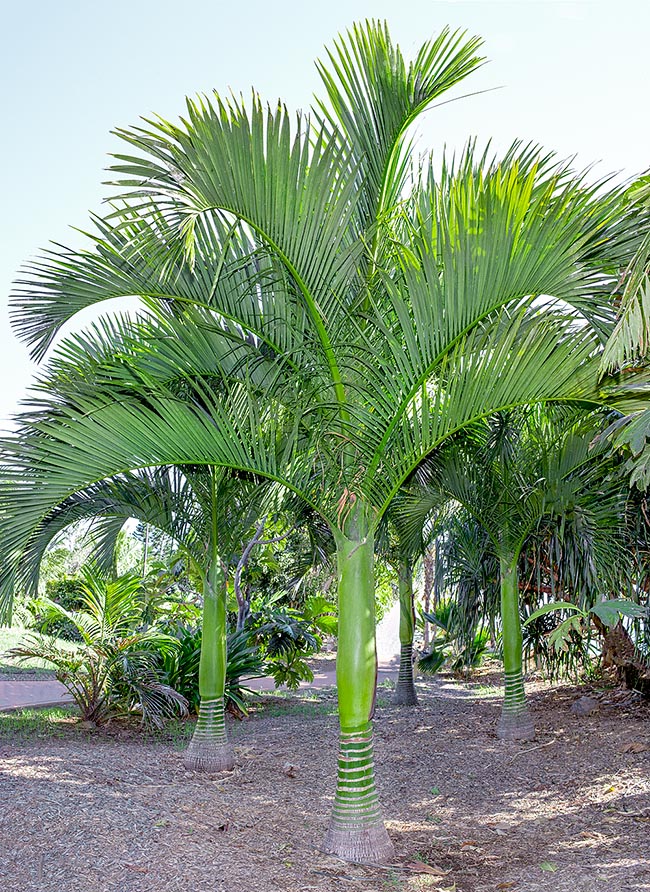 Endemic to the Vanuatus, Carpoxylon macrospermum in nature reaches the 25 m with base enlarged like a bottle, up to 50 cm of diameter. The fruits are source of food for the coconut crabs and the flying foxes. Locally the gelatinous endosperm of the unripe fruits, of pleasant taste, is at times consumed. Species at high risk of extinction in nature © Giuseppe Mazza

Unisexual flowers arranged in triads (one female flower between two male ones) except in the terminal part of the rachillae (secondary ramifications of the inflorescence) where are present only solitary or coupled male flowers.

It reproduces by seed, previously kept in water for 3 days, interred for about ¾ in organic draining loam maintained humid at the temperature of 26-28 °C, with germination times starting from two weeks.

Of easy cultivation and fast growth, it’s one of the most ornamental palms for the gardens of the tropical and humid subtropical climate zones, as it does not stand temperatures close to 0 °C, isolated, in group or in rows on the sides of alleys.

It requires full sun, but in the juvenile phase when is preferable a partial shade, and is not particular about the soil, provided perfectly draining, but grows at best in the sandy ones rich of organic substance, maintained almost constantly humid, but without stagnations; well rooted it can resist short dry periods, but bears badly the warm and arid winds.

The young plants cultivated in pot are greatly elegant for the decoration of luminous inner spaces, utilizing a draining organic loam, with abundant watering in summer, more spaced in winter, but without ever allowing it to dry up completely, with lowest night temperatures over the 15 °C.

The species was described in 1875 starting from the only fruit collected in the island of Aneityum and inserted in a genus different from that of the palm, having similar fruits, present in the island, the Veitchia spiralis H.Wendl. (1868), but with the non eccentric apical stigmatic scar. Considered exinct for over a century, till when in 1987 the Australian botanist John Leslie Dowe (1962) did not “discover it again” in a fortuitous way in the island of Espiritu Santo. Later on have been counted 32 adult individuals in nature (Aneityum, Futuna and Tanna), and a little over a hundred cultivated near the villages of the islands of the archipelago, besides numerous young individuals. In the same time have been distributed seeds to various botanical institutions and, in a limited way, to private collectors, and already from the end of the XX century numerous specimens are present in various parts of the world.

In the Vanuatu the palm is utilized as ornamental as well as for minor uses, the gelatinous endosperm of the unripe fruits, of pleasant taste, is at times consumed, that of the ripe fruits, extremely hard, is used for pipe stoves. The leaves are employed as covering material and for fabricating brooms, the bract (prophyll) for mats and as improvised container of foods and liquids. Moreover, it is a source of food for the coconut crabs (Birgus latro L. 1767) and flying foxes (Pteropus anetianus Gray, 1870).

Due to the restricted area of origin, the anthropic pressure and the limited number of mature individuals, in steady decline, the species has been inserted (1998) in the red list of the IUCN (Union for the Conservation of Nature and Natural Resources) as “Critically Endangered” (at very high risk of extinction in nature in the immediate future).