Cathedral, Churches and Chapels of the Principality of Monaco 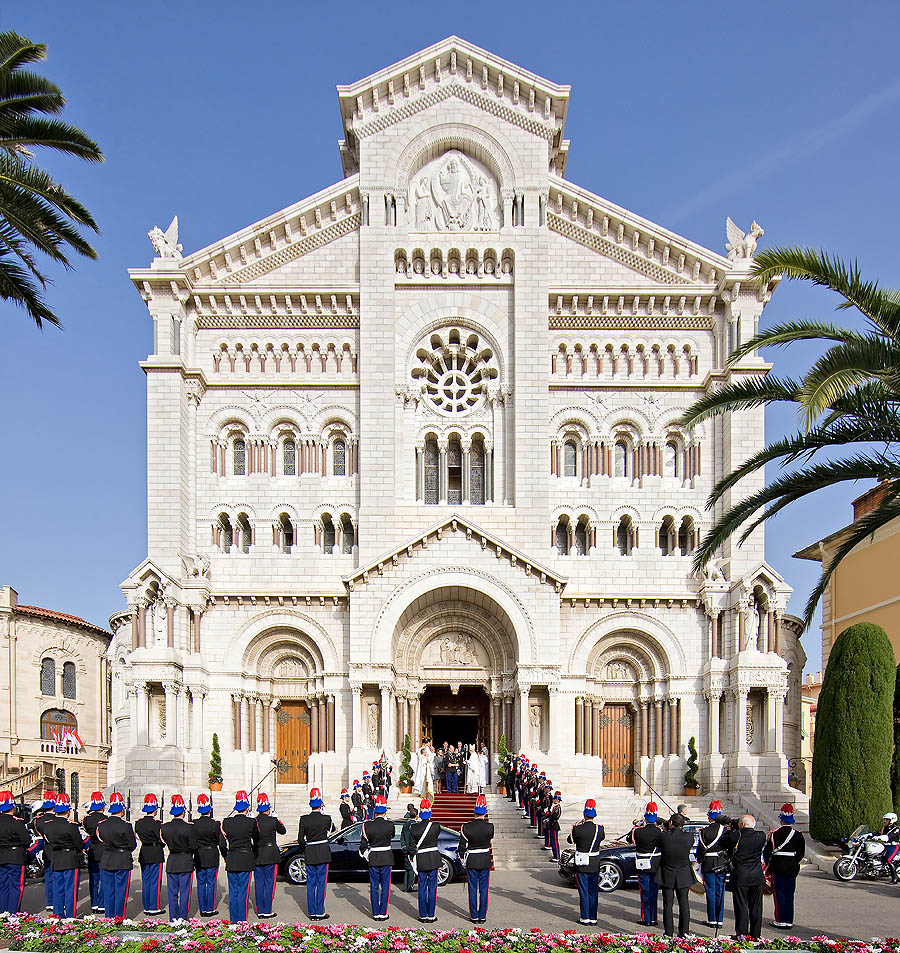 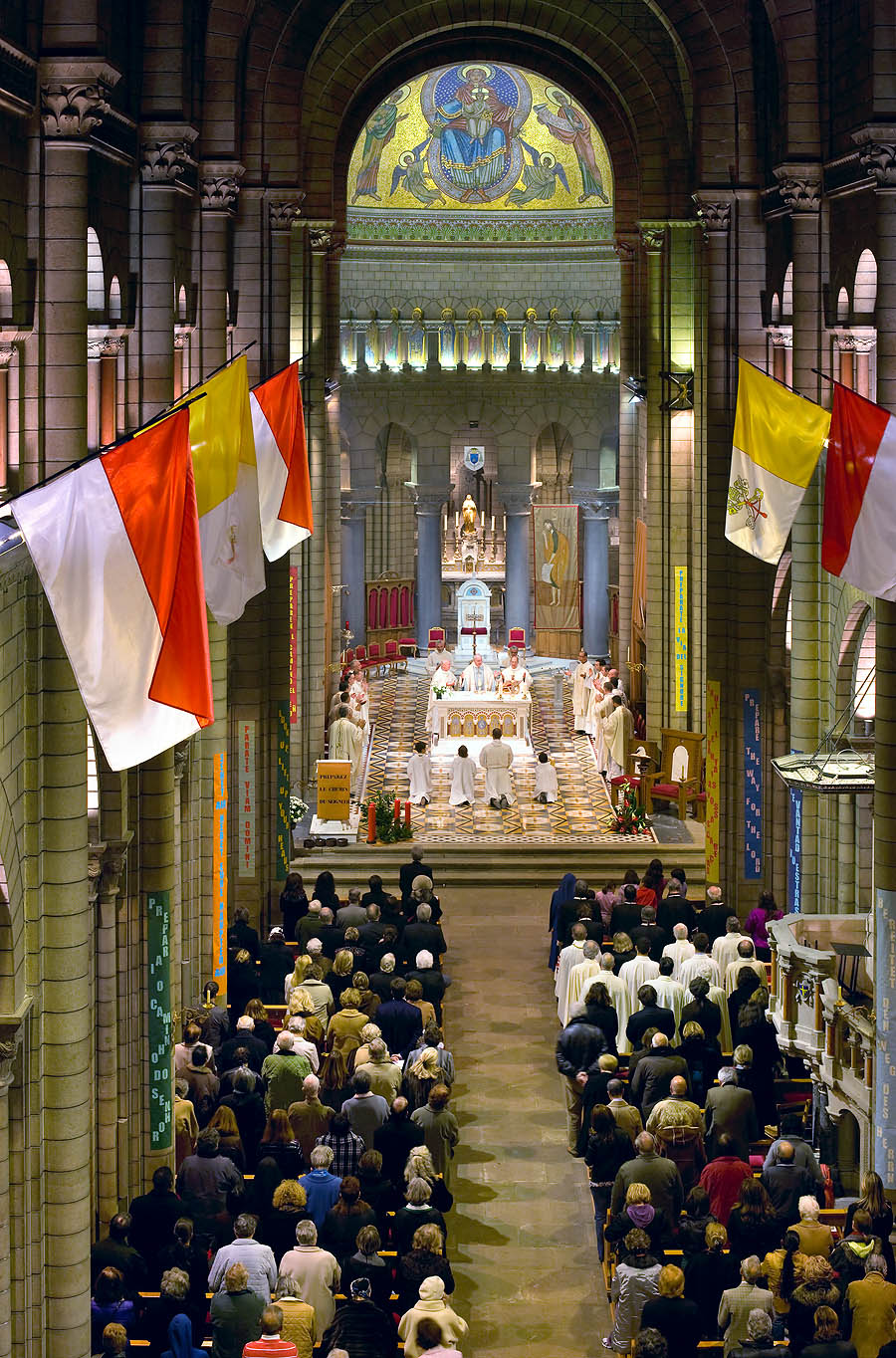 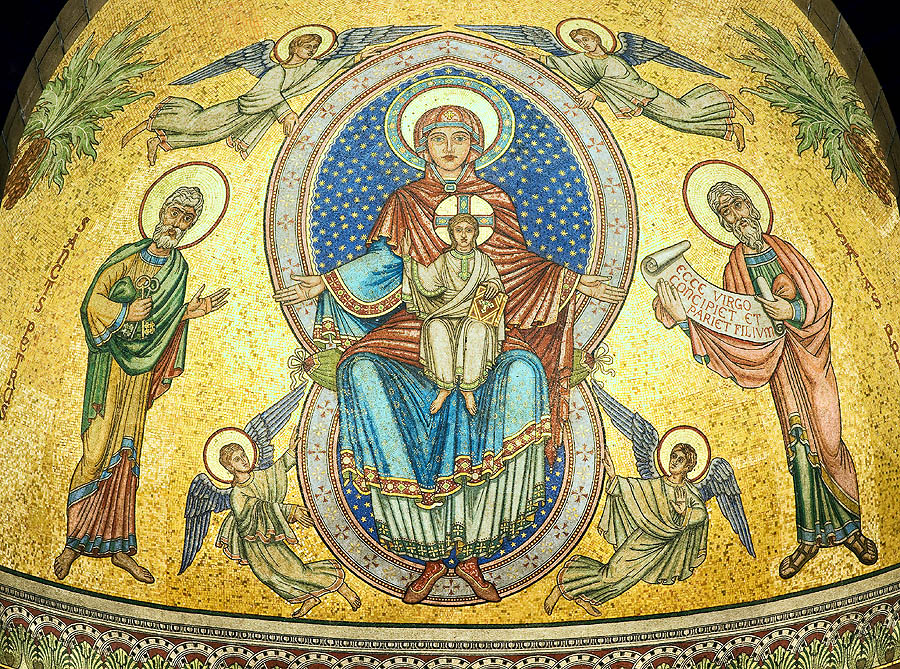 Monaco Cathedral: mosaic with the Virgin Mary and the Child Jesus, sided by Saint Peter and the Prophet Isaiah 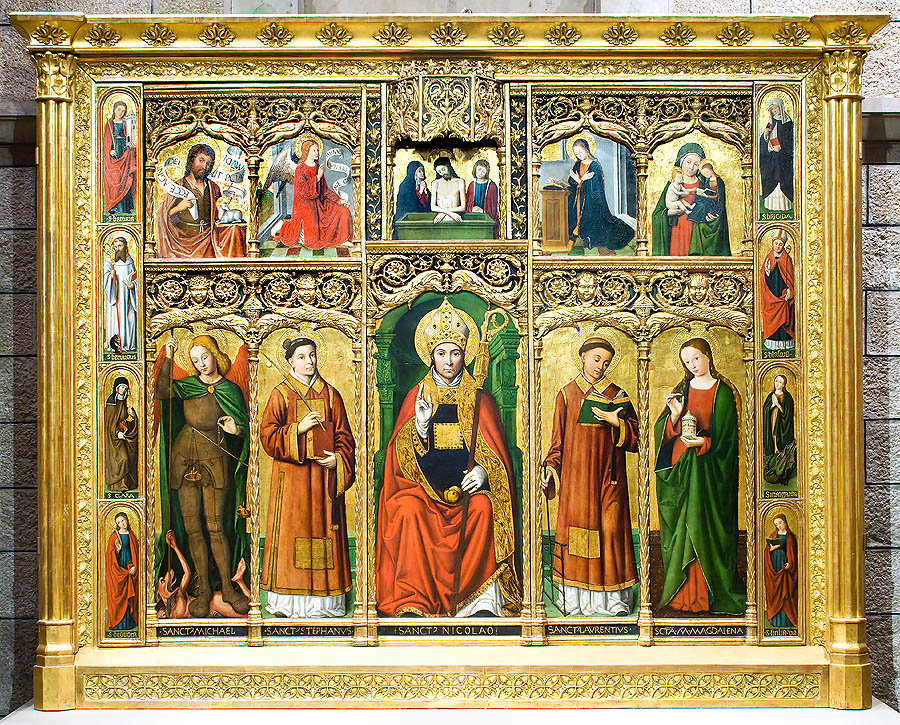 The altarpiece of St. Nicholas, visible in the Cathedral ambulatory, was realized in 1500 by Louis Bréa, famous paint Nice master who operated, marking a transition point between the Medieval painting and the Renaissance one.
Under, on the left, close to St. Nicholas, patron of Monaco and bishop of Myra, St. Michael stabs and tramples an evil, half man and half dog, and weighs the souls for the Final Judgement, while St. Stephen, hit by a stone in me- mory of his lapidation, looks towards the beholder. On the right, St. Lawrence with the Roman Church registry, read again before martyrdom, and his torture gridiron, and St. Mary of Magdala, with her box of ointment for the Christ.

On the sides, to the left, St. Barbara, St. Bernard, St. Clare of Assisi and St. Devote. To the right, St. Brigid, we do not know quite well if of Ireland or Sweden, St. Blaise of Sivas, St. Margaret with in her hand the cross utilized in prison just in order to send away Satan, in the shape of a dragon, and St. Julia, patron of Corsica along with St. Devote.

Upwards, on the sides of the Holy Sepulchre of Christ, St. John the Baptist, the Archangel Gabriel with the Annun- ciation to the Virgin Mary, and an unusual portray of St. Anne, ideally holding in her arms Mary and the Child. 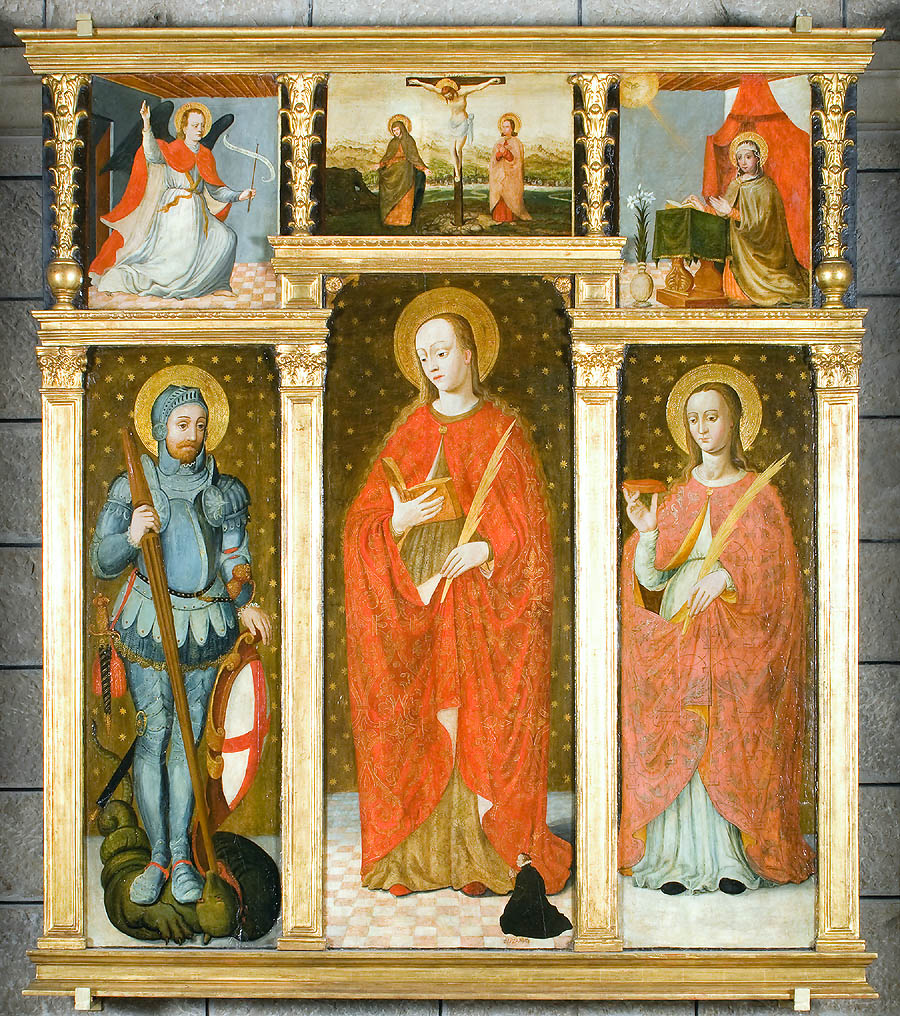 Monaco: St. Devote sided by St. George and St. Lucy. Polyptych by unknown Ligurian school author, offered around 1560-1570 by Isabelle Grimaldi, wife of the Prince Honoré I, shown in miniature, knelt downbelow, in the central panel. Upward, the Virgin Annunciation with the Archangel Gabriel and the Crucifixion. 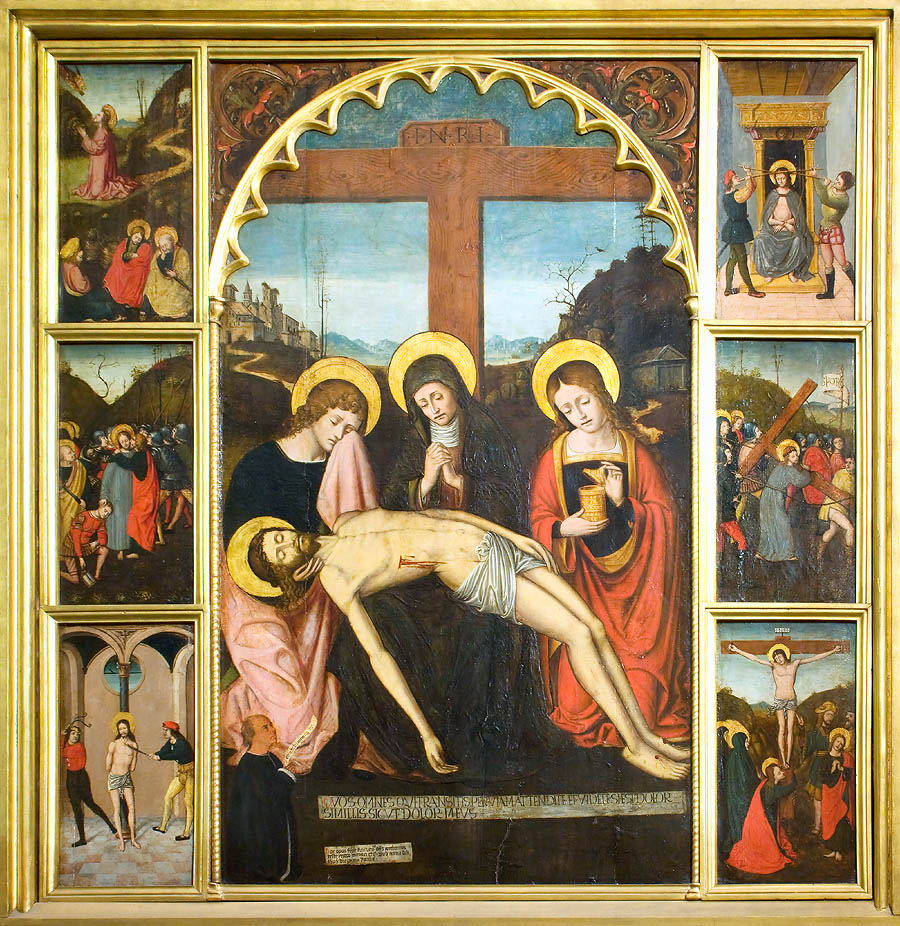 Monaco: “La Pietà” so called of the Curate Antoine Teste. Polyptych ordered to Louis Bréa, by the parish of Saint Nicholas, and completed on April 1st, 1505. 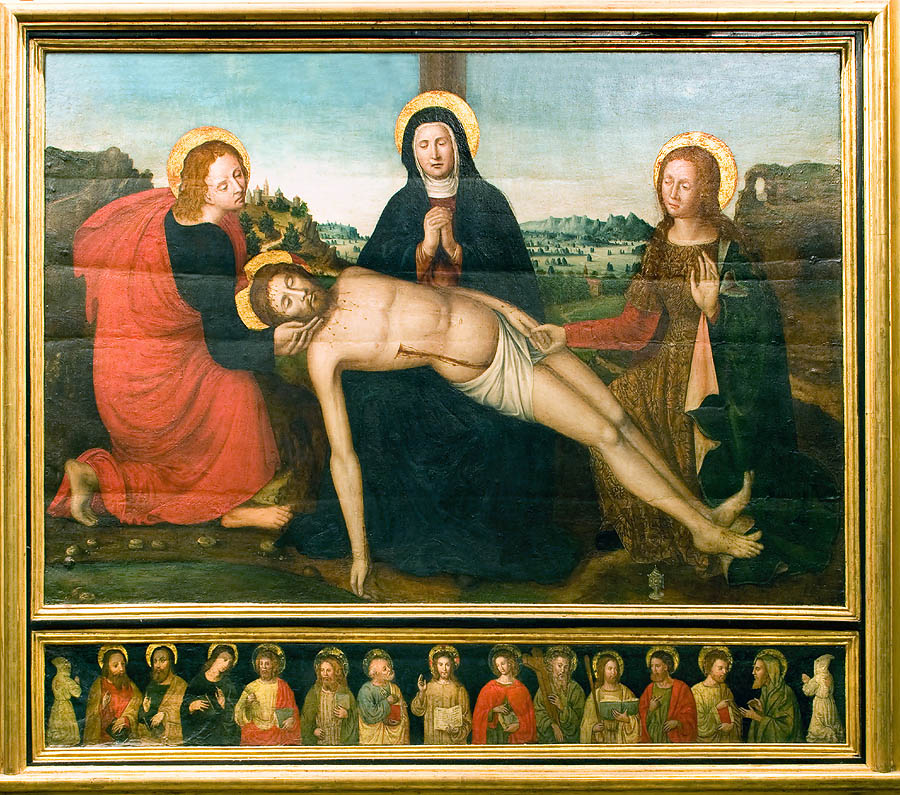 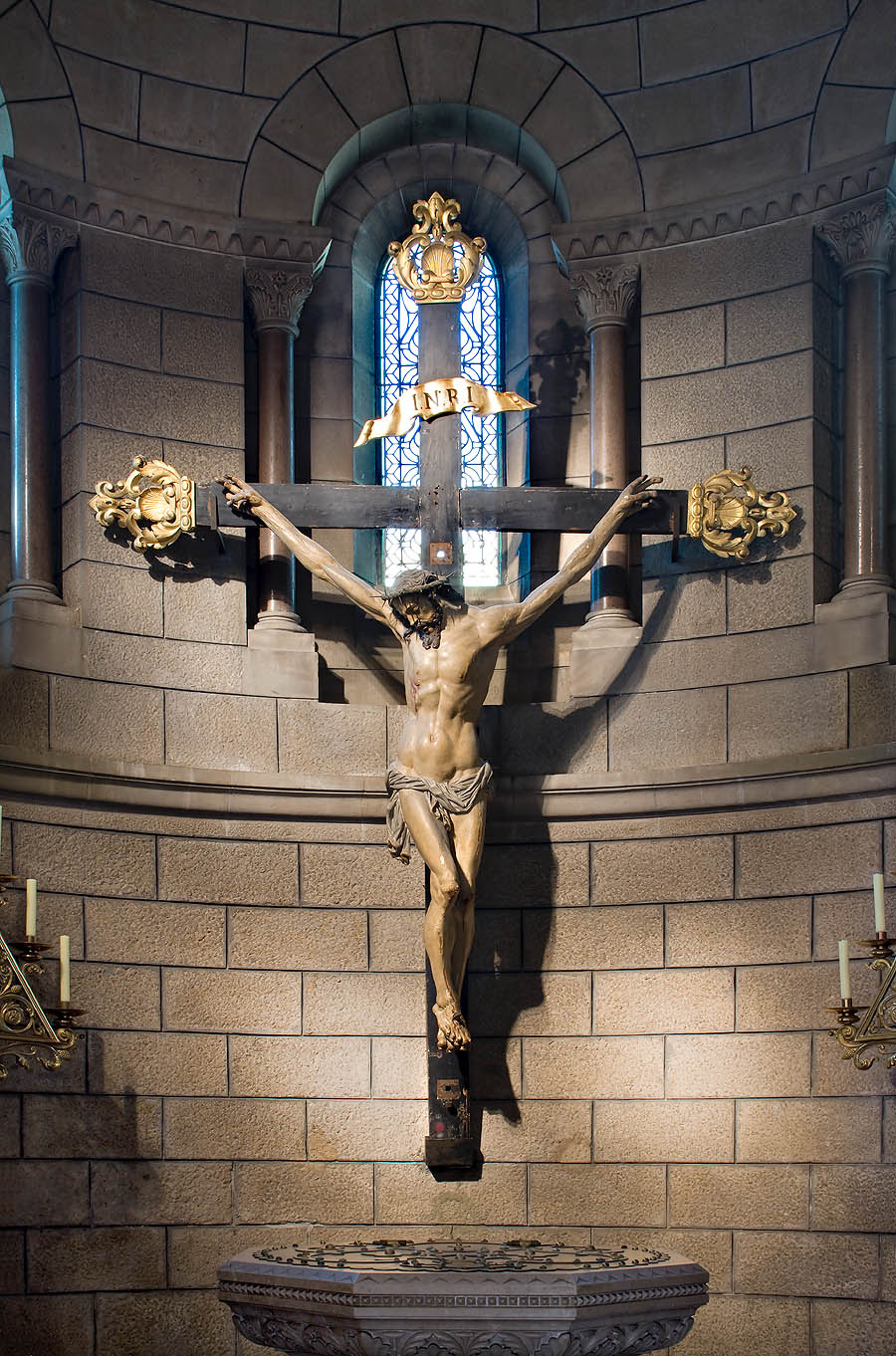 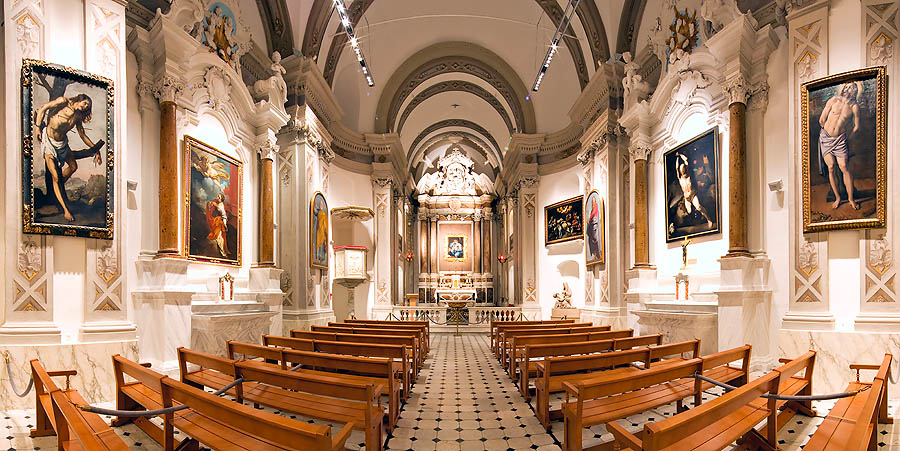 Monaco-Ville: the Chapel of Visitation 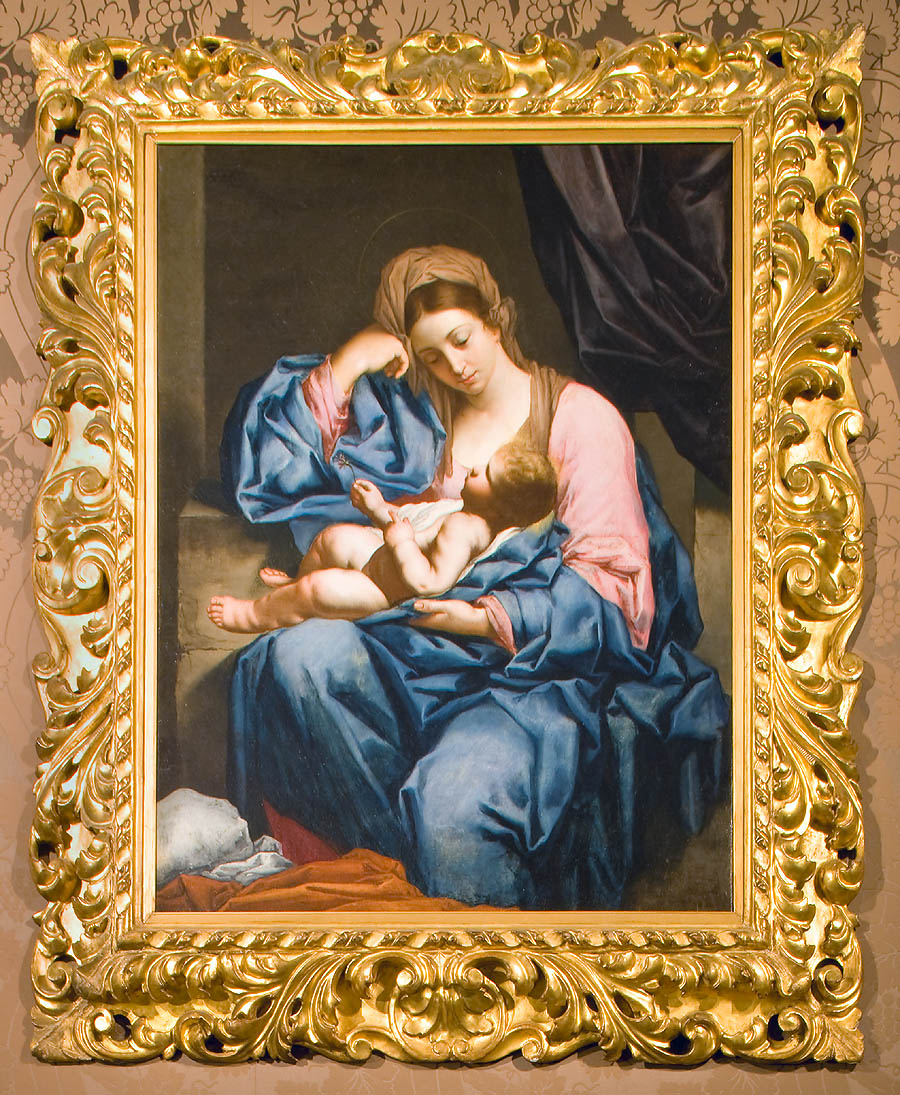 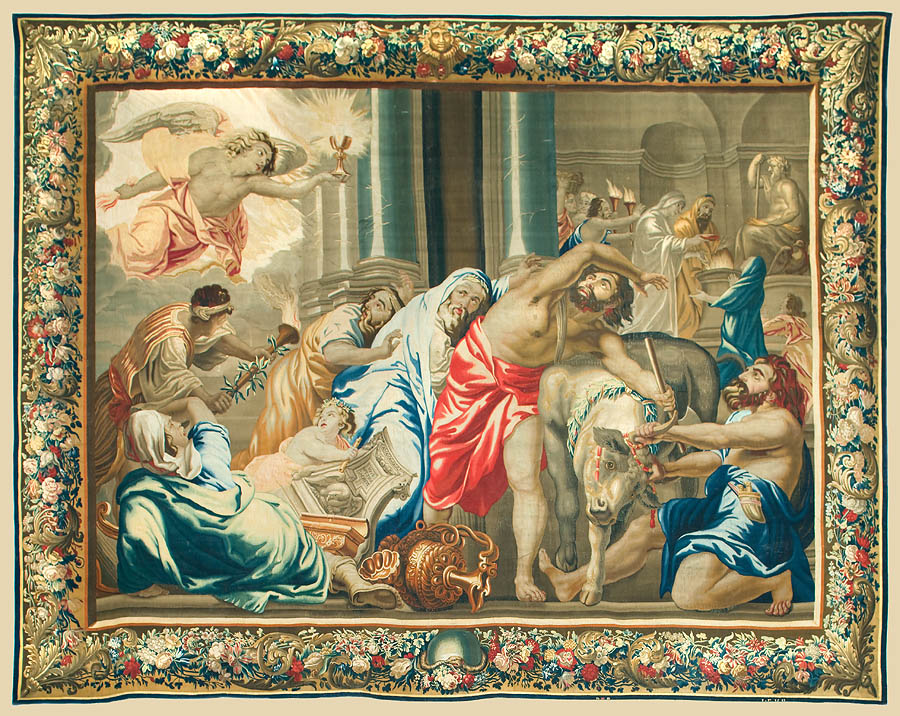 Monaco-Ville: tapestry “The Triumph of the Eucharist” over the pagan sacrifices, by Jean Franc Van De Hecke around 1691, after a cartoon by Rubens, dated 1625-26. 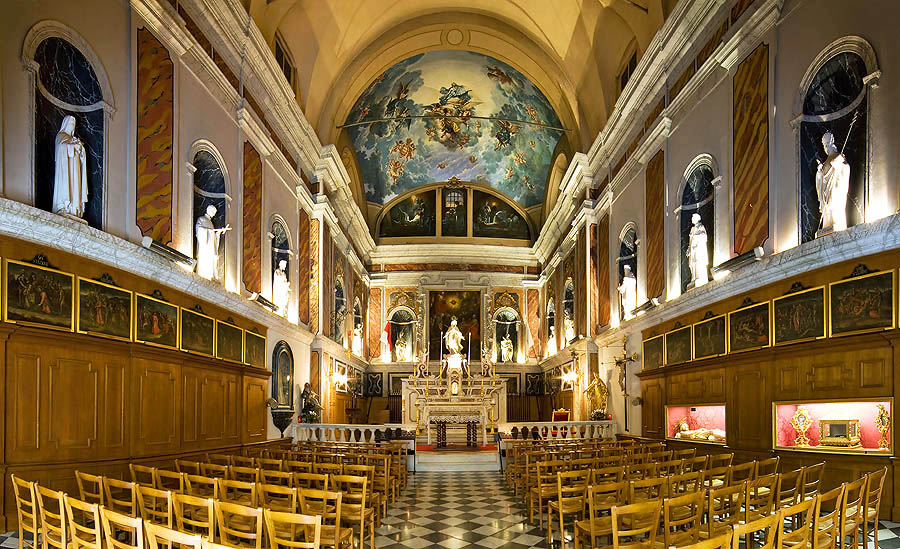 Built by Giacomo Taddeo Cantone, under Prince Honoré II rule, the Chapel of the Miséricorde in Monaco-Ville is honoured to St. John the Baptist. 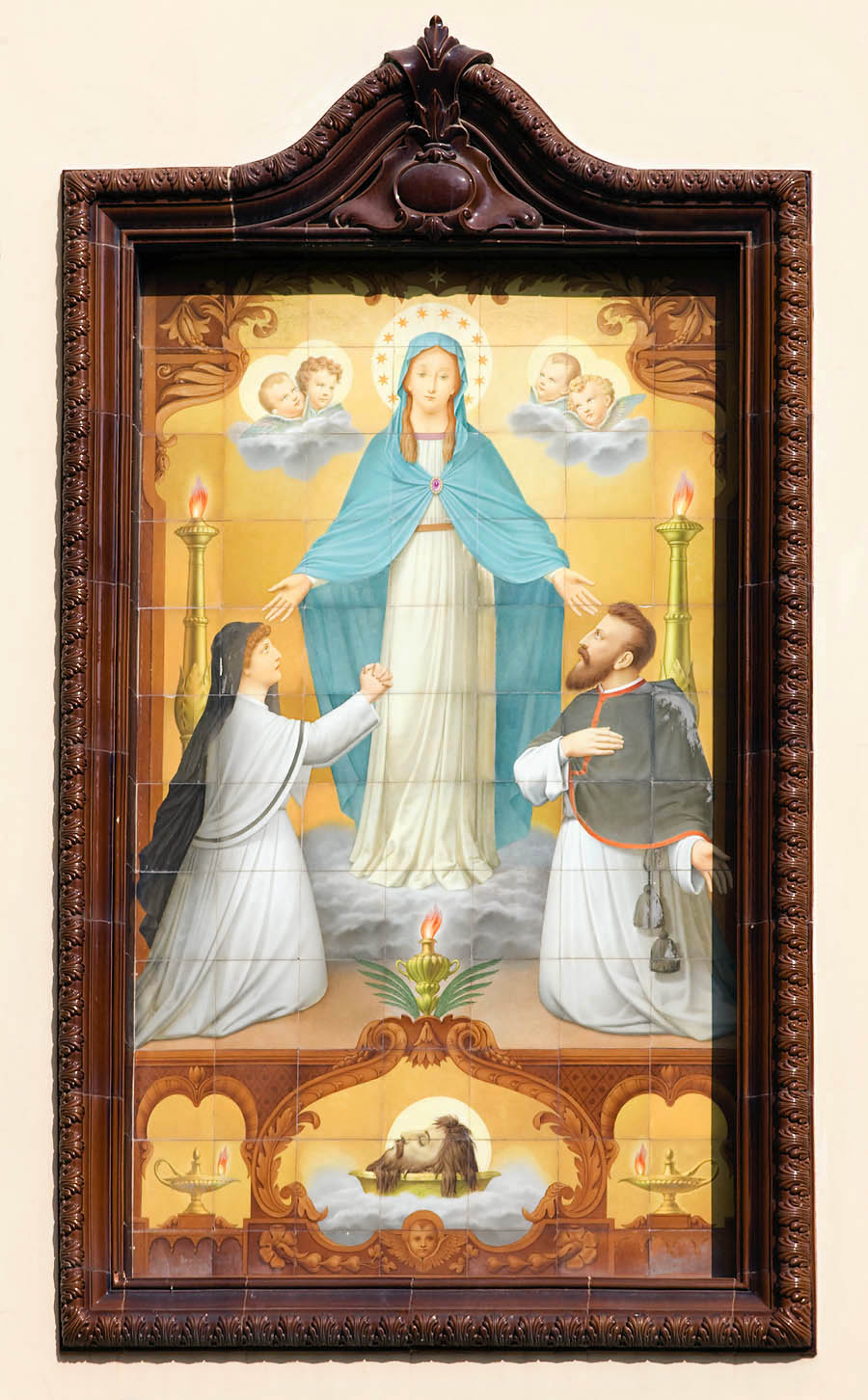 The huge ceramics on the façade of the Chapel of the Miséricorde in Monaco-Ville by Ernesto Sprega, master craftsman of the famous Monégasque terracottas, represents the Black Penitents and the head of St. John the Baptist. 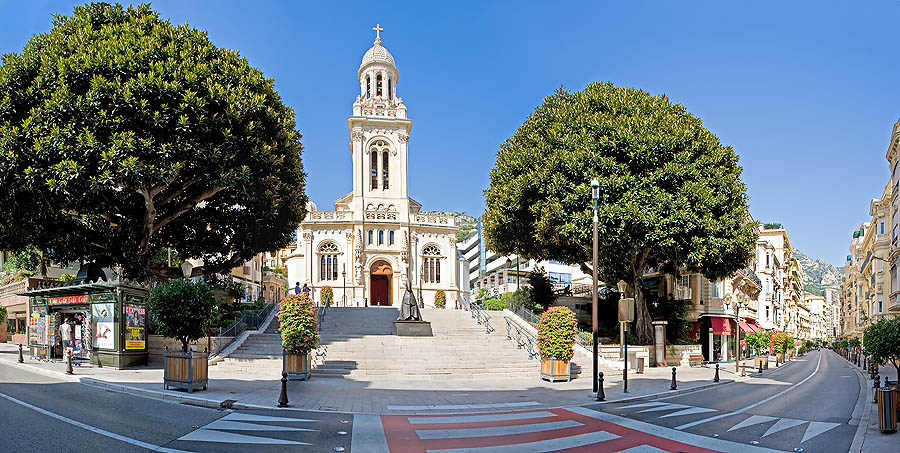 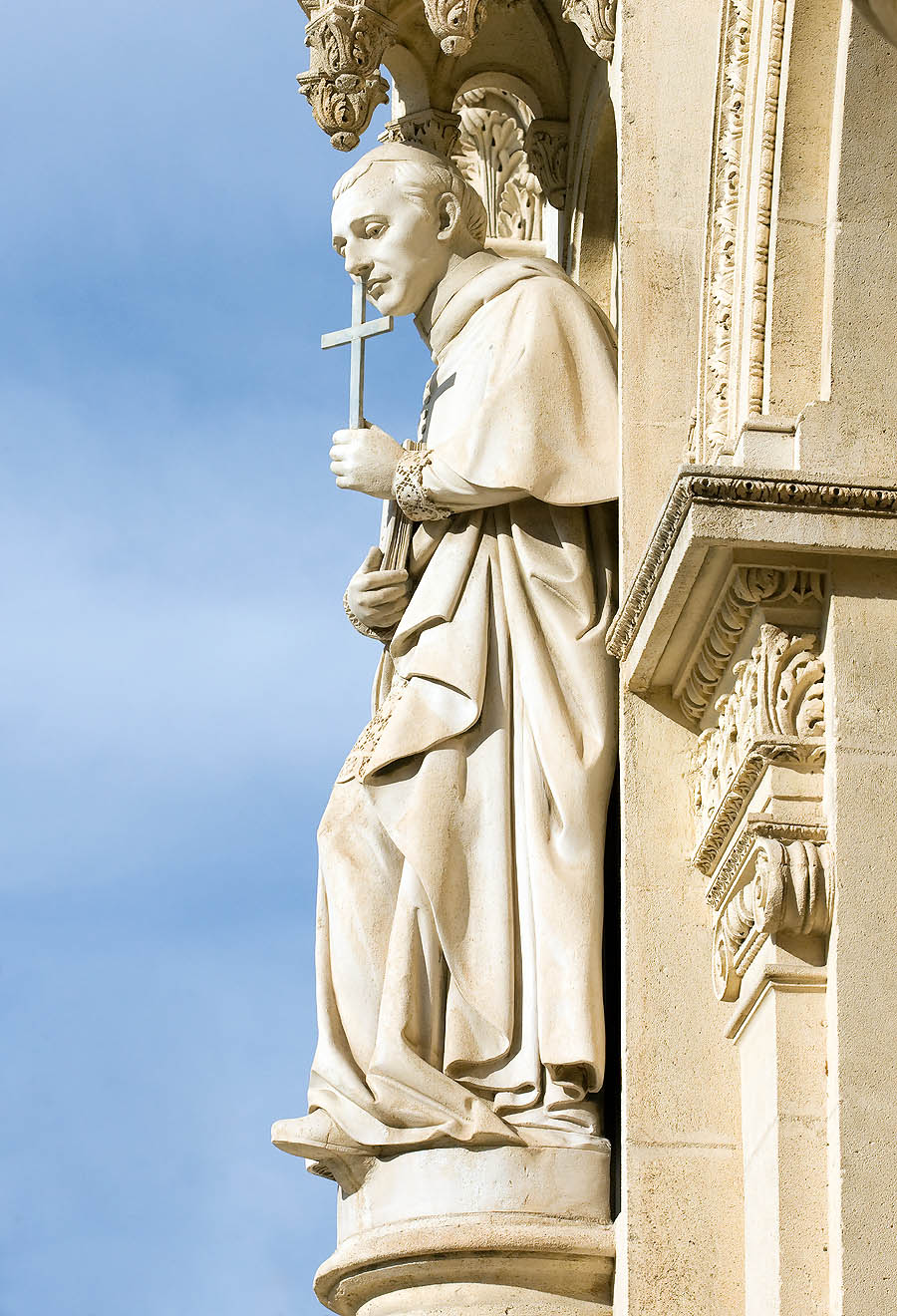 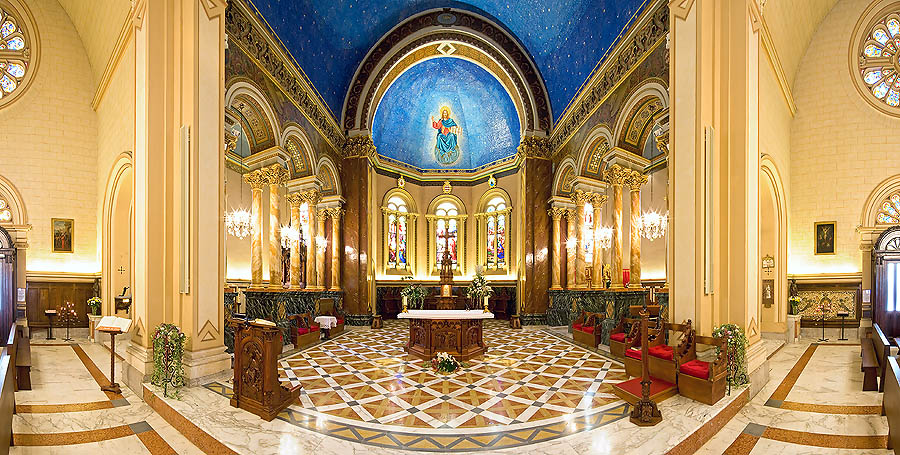 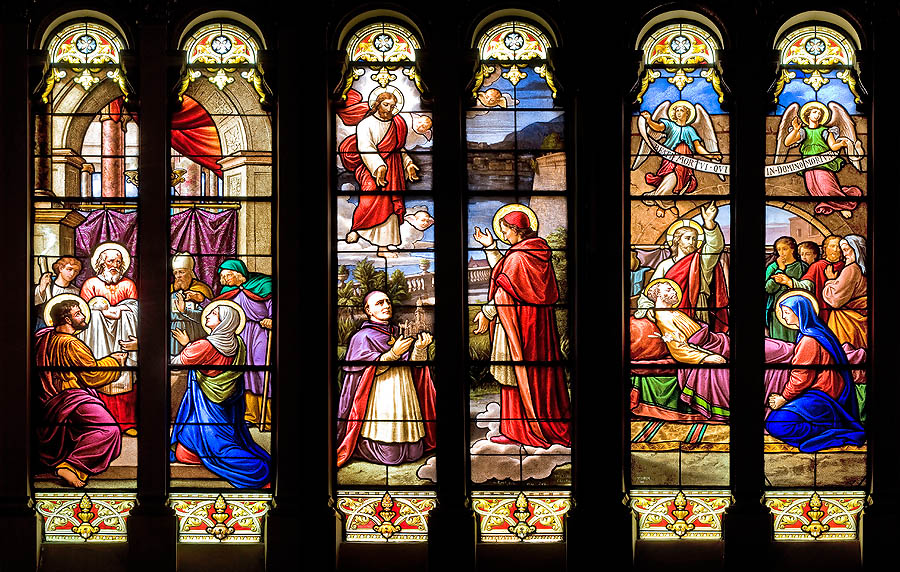 Monte Carlo: stained glass windows in the apse of Saint Charles church showing the Presentation of Jesus at the Temple of Jerusalem, the offering of the church to Saint Charles by Msgr. Thevret, and the demise of Saint Joseph. 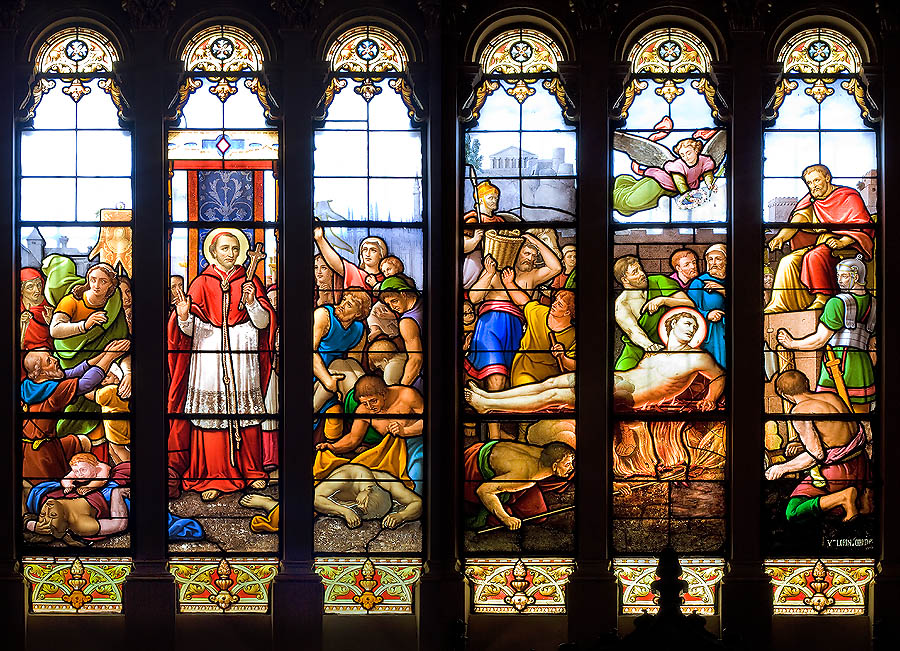 The stained glass windows of Saint Charles church in Monte Carlo, have been done in 1883-1884 by the Maison Lorin of Chartres and have received several recognitions. Here they show Saint Charles Borromoeo during the plague of Milan and Saint Lawrence Martyrdom on the gridiron. 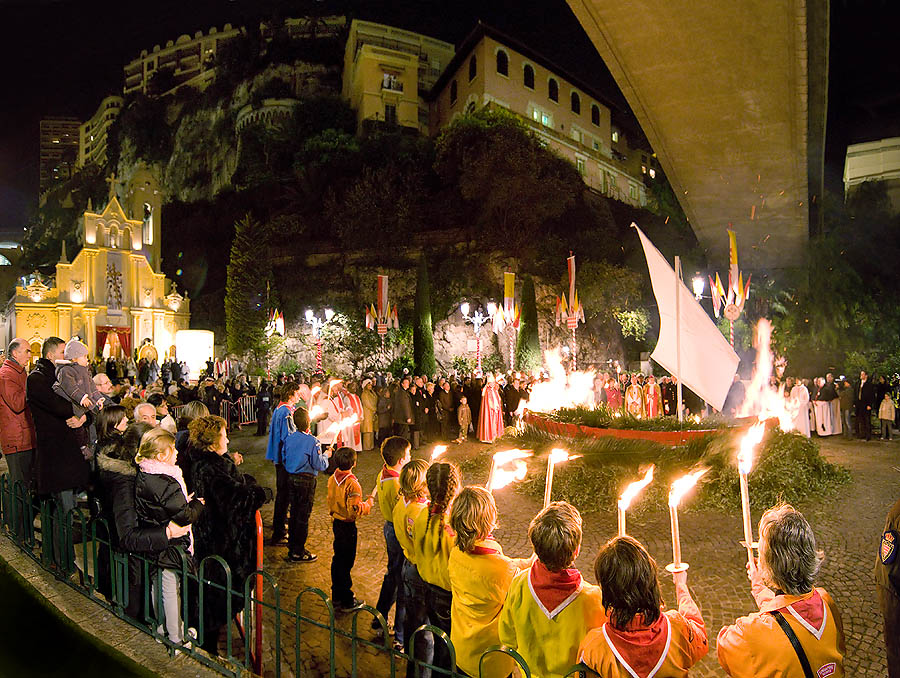 Monaco: every year, on January 27th, they burn a boat on the parvise of the church, in memory of the Patron Saint relics’ thefts, happened in the Middle Age. A violent storm did not allow the sacrilegious to leave. He was caught. His nose and ears were cut off, and his boat burnt. 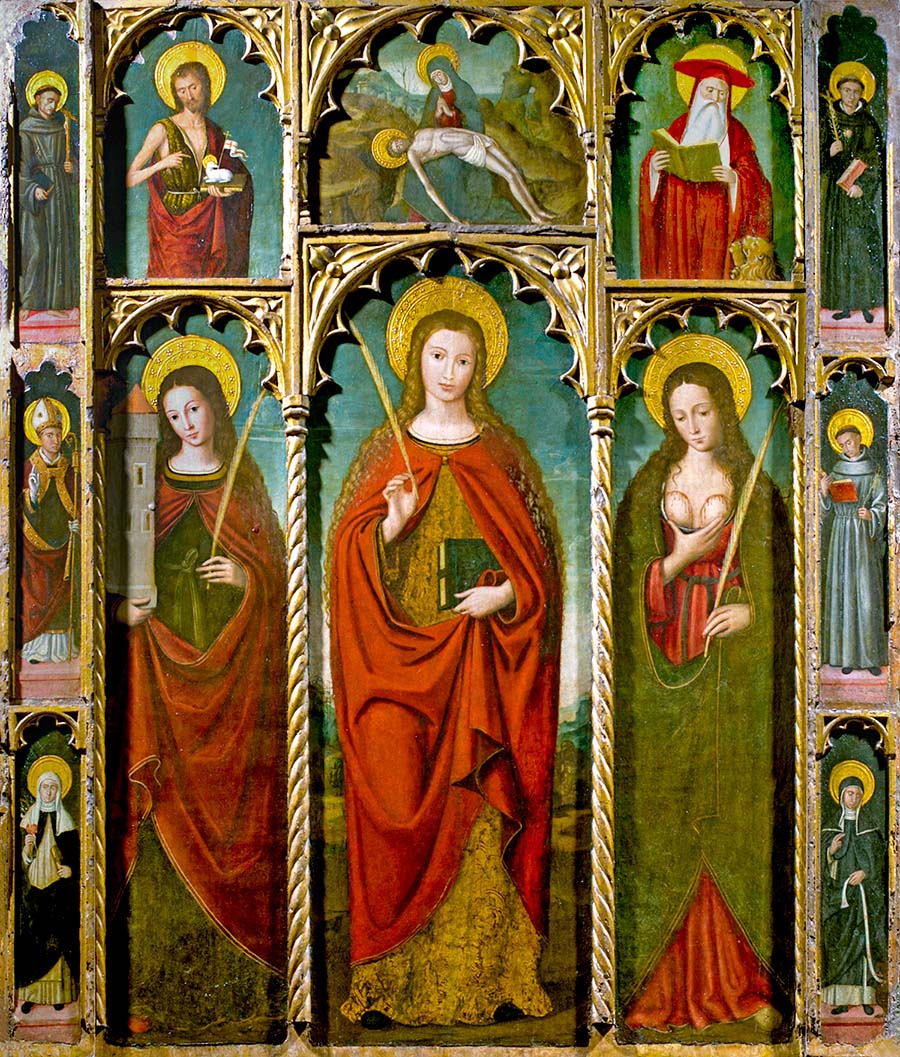 Other enlargeable panoramic views of the Principality of Monaco

Cathedral, Churches and Chapels of the Principality of Monaco was last modified: May 16th, 2022 by Nacho