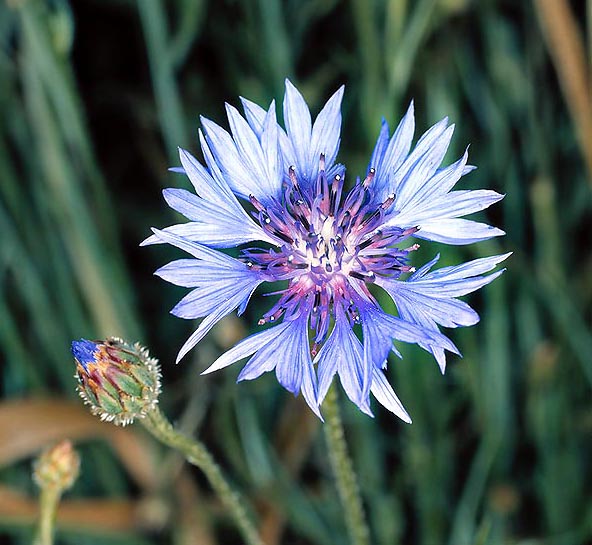 The plant is native to Asia (Iran, Iraq, Pakistan and Turkey) and to southern Europe (Albania, Bosnia, Bulgaria, Croatia, Italy, Macedonia, Serbia and Slovenia), where it grows from the sea level up to about 2.500 m of altitude, both in fallow and in uncultivated fields, especially in the wheat fields, from which, nowadays, it has almost disappeared due to the massive utilization of herbicides.

The Centaurea cyanus L. (1753) is an annual herbaceous plant with hollow, angulated, erect stem, slightly tomentose, 20-90 cm tall; it has 2-10 cm long alternate leaves, greyish, branched, tomentose, the basal ones being linear, lanceolate, entire or with just delineated lobes and sharp apex, but at times, they may be pinnate-parted; those along the stem are alternate, linear, lanceolate, thin, shorter than the basal ones. The terminal inflorescence, with a diameter of 2,5-4 cm, is the typical head of the Asteraceae formed by a crowd of sessile flowers (without peduncle), spirally inserted on a roundish base; the receptacle, surrounded by an involucrum, about 15 mm tall and 6-10 mm broad, formed by imbricated bracts with fringed margins of a brown colour.

The flowers of the outer ring, called ray florets, are 20-25 mm long and have the corolla, formed by five petals fused together which extend laterally in radial direction, with apex subdivided in lanceolate lobes; the corolla is usually of a deep blue colour, but can have different colour gradations, from white to purple, to blue.

The ray flowers are sterile and have the function of attracting the pollinator attention, same as the petals of a single flower. The fertile flowers, called disc flowers, are inside this ring and are 10-15 mm long, with a symmetrical tubular corolla of purple colour with five short lobes. 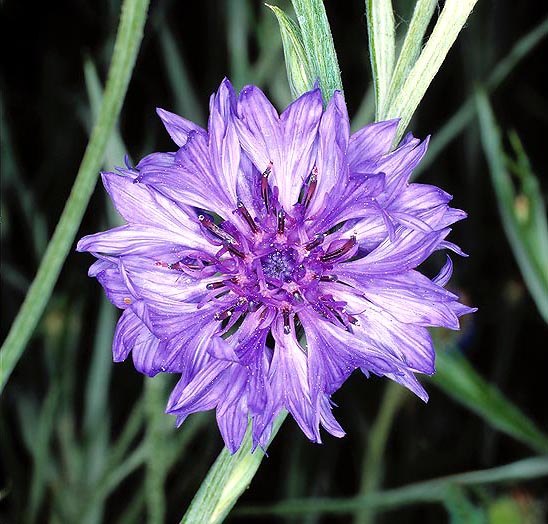 The fruits, containing one seed only and called achenes in the Asteraceae, are about 4 mm long, with a colour going from the yellowish brown to the blackish, surmounted by the pappus, the modified calyx of the flower, formed by a crown of rigid brownish orange bristles, which has the function to aid their dispersal. The disc flowers are bisexual, but have the phenomenon of the protandry, the male organs, the anthers, ripe before the female ones, the stigma, preventing the self-pollination and aiding the out-crossing; behaviour which is common to almost all the Asteraceae.

A single plant is capable to produce from many hundreds to few thousand of seeds, and therefore is deemed as a invasive species. It reproduces by seed, which can be placed directly in the ground in spring; the most favourable temperature is around the +10 °C, the blooming begins after 5-6 weeks; it self disseminates quite easily, and in fact it has naturalized almost everywhere.

Plant which has always attracted the attention due to the blue colour of its inflorescences, hero of many legends and anecdota, it’s one of the national flowers of Germany and that of Estonia, places from which the plant is not native, but naturalized. It grows in full sun in whatever sort of soil, even if it prefers the neutral or alkaline sandy ones. It is utilized in mass as ornamental plant, for edges or in the rocky gardens, and for such purpose several varieties have been selected with more compact appearance, low height and bigger flowerheads, in addition to different gradations of colour; the dwarf varieties are suitable also for the cultivation in pots and flower boxes. It is also utilized as cut flower, even if much less than in the past, seen its quite good duration (5-7 days), and as desiccated in the compositions of dried flowers.

The plant, especially the capitula, have been variously utilized in the traditional medicine and still now in the herbalist’s shops, mainly in the ophthalmic field thanks to the presence of active principles, such as flavonoids and anthocyanins, with anti inflammatory properties.