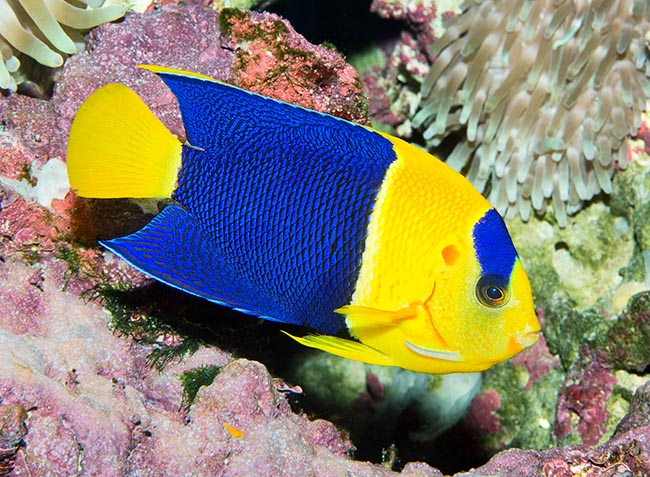 The Bicolor angelfish (Centropyge bicolor Bloch, 1787), belongs to the class of the Actinopterygii, the ray-finned fishes, to the order of Perciformes, to the family of Pomacanthidae and to the genus Centropyge which, with 32 species of 90, is the most numerous of the family.

The etymology of genus Centropyge comes from the Greek “kέντρον” (kentron) = sting and “πυγή” (pyg) = rear, with reference to the long spine of the operculum which points towards the tail.

The Latin name of the species bicolor = bicolour, with two colours, clearly refers to the characteristic yellow and blue livery.

It is present in the tropical Indo-Pacific waters.

We find it, for instance, along the eastern African coast, from South Africa and Madagascar up to the Red Sea and the Arabian Sea, the Seychelles, Réunion, Mauritius, Chagos, Cocos, Maldives and Andaman islands, in India, Sri Lanka, Cambodia, Thailand, Malaysia, Indonesia, Australia, New Guinea, Micronesia, Philippines and Taiwan up to the Ryukyu Islands in the southern part of Japan. Eastward, it has colonized the islands of Samoa and Tonga and the Phoenix Archipelago in Kiribati. Southward, in the Pacific, the Great Barrier Reef, Vanuatu, Fiji and New Caledonia.

It is a small fish for calm and sheltered waters, rich of corals where, being very shy spends the day speeding from a hideout to another. Present also on the outer side of the reefs, it does never, in any case, go down under the 25 m. 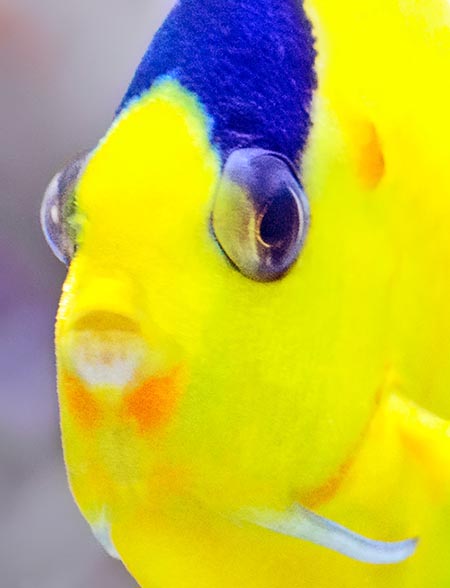 The great spine at the operculum base gave the name to the genus © G. Mazza

The bicolor angelfish can reach the 15 cm of length. Flat, it seems almost rectangular when the fins are spread, with big scales, showy lips and small mouth armed by brush-like teeth. At the base of the operculum we immediately note, white and suffused of blue up on yellow background, the long spine characteristic of the genus. It is the main defence, flanked by the 15 spiny rays of the dorsal fin, ending with 15-17 unarmed rays, and by the 3 spiny rays of the anal, with 17-18 soft. The pectoral fins, fan-shaped, count 16-17 rays; the ventral ones are modest and pointed, whilst the caudal is slightly rounded.

Almost half of the fore part of the body and the caudal have a nice bright yellow colour, as well as the pectoral and ventral fins, in clear mimetic contrast with the blue central zone, enriched by the dark contour of the scales, which end creating a reticulum, and by the drawings on the ventral fin ending often in a pale blue small edge, in elegant contrast with the yellow one of the dorsal.

On the front, over the eyes, stands out a blue saddle, small and black in the juveniles, and we note close to it, a round orange spot. This colour is repeated, in the yellow part, by the contour of the scales of the back, and appears also under the mouth and at the limit of the operculum.

The bicolor angelfish nourishes mainly of the filamentous seaweeds infesting the madrepores, but when it’s the case also of small crustaceans and small worms.

Despite being very shy, it is territorial and the males, with a small harem, fiercely defend their zone, which may reach the 200 m2.

It is a protogynous hermaphroditic species, that is, with females who, while growing, may transform into male. The hierarchy is simple: every respecting male sets up home with a partner, the future favourite, and then, driving out the competitors, allows the entrance only to the females, often immature, up to a maximum of 9.

By the time of the reproduction, usually towards evening, after a nuptial dance with the female of greater status, the male fecundates at mid-water the pelagic eggs which are entrusted to the currents. The larvae are blind and begin to nourish only around the third day of life, assuming, after a first metamorphosis, around the two months, the adults appearance. When the male passes away the biggest female changes quickly of sex and inherits the small school.

Unfortunately, it is a species too much fished for the aquaria, where, if well kept, can live even 13 years. The resilience is low, with populations taking 4,5-14 years for doubling their number, but on the other hand the number of eggs emitted is enormous and the vulnerability index of the species keeps therefore still low, marking nowadays 23 on a scale of 100.