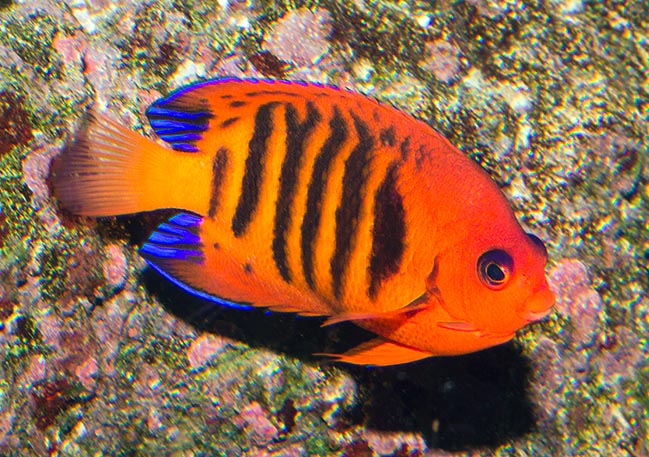 The showy Flame angel (Centropyge loricula Günther, 1874), belongs to the class of the Actinopterygii, the ray-finned fishes, to the order Perciformes, to the family Pomacanthidae and to the genus Centropyge which, with 32 species, is the most numerous in the family.

The etymology of the genus Centropyge comes from the Greek “kέντρον” (kentron) = sting and “πυγή” (pyg) = rearward with reference to the showy spine of the operculum bent towards the tail.

The name of the species loricula is the diminutive of “lorica” = breastplate, corset, with reference to the drawing with vertical bars recalling the laces of a corset.

It is present in the tropical waters of the Pacific Ocean. 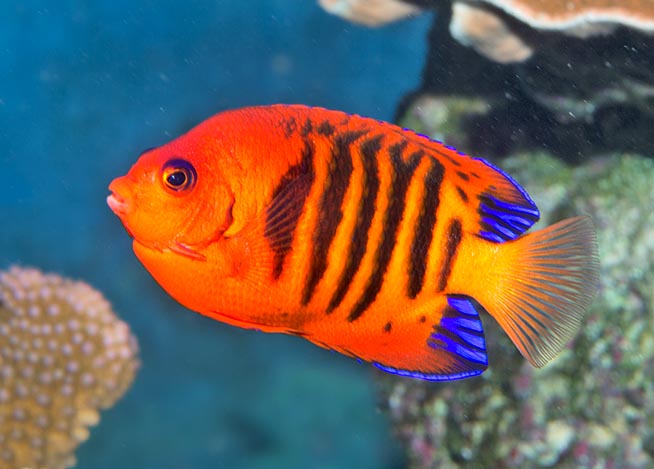 It’s the world’s most sold angelfish, with 5.000 specimens per week © Giuseppe Mazza

It lives among the madrepores and the corals, in the lagoons and on the cliffs of the reefs, usually between the 15 and 60 m of depth.

In nature, it can reach the 15 cm of length, but in aquarium it rarely exceeds the 7 cm, a size which is in any case small for an angelfish, so much that in Australia they call it “Japanese pygmy angelfish”. 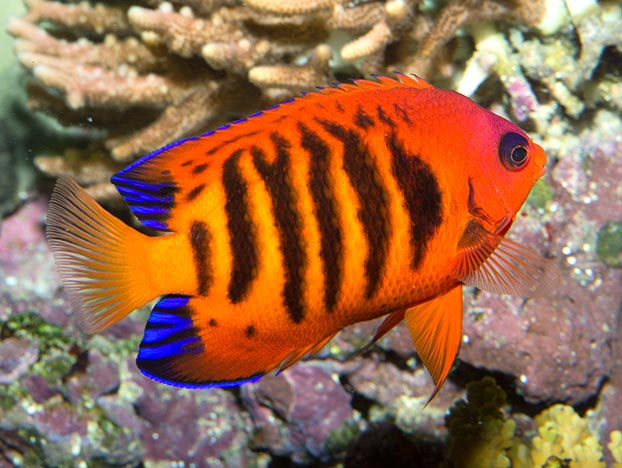 The species is not in danger, but the habitat degradation due to fishing is often serious © Giuseppe Mazza

The flame angel is very shy and when it swims this is done for moving from a hiding place to another. Usually, it never goes too far from its den, and the males, slightly bigger and braver, defend a small territory, often enriched by a harem of 3-7 females.

It nourishes of seaweeds, polyps of madrepores, sponges and ascidians like its bigger relatives.

The eggs are pelagic and the young carry on a life hidden among the corals.

If fished when small, they easily adapt to the aquarium life and if well kept, they may leave even 10 years. Seen their showy colours and the modest size, every week, in the world, 5.000 of them are sold, with serious degradations for the corals, often cut at their base by the divers, just to save time, and then taken ashore in plastic bags with their valuable contents.

Luckily, the Centropyge loricula reproduces also in captivity, but to raise the young is a job for specialists. The species itself does not have any risk, due to the vast diffusion and the fact that the populations can double in less than 15 months. It has a definitely low vulnerability index: only 23 on a scale of 100.