The Ceratozamia decumbens Vovides, Avendaño, Pérez-Farr. & Gonz.-Astorga, (2008),a cycad endemic to Mexico, where it grows on the hills in the territory of Veraceuz, in little deep soils, among the karst rocks of the tropical semideciduous forest, at about 700 m of altitude. We find associated with tropical arboreal species and underwood palms like Chamaedorea elatior, Chamaedorea tepejilote and Chamaedorea elegans. The site is a warm-subhumid climatic health resort, with annual rainfall between 1000 and 1200 mm ans an average annual average temperature of 21,5 °C, which records 12-13 °C in the coldest period.

The name of the genus Ceratozamia comes from the Greek “κέρας, -ατοϛ” (céras, cératos) = horns and “ἀζαίνω” (azaíno) or “ἀζάνω” (azáno) = cone, with reference to the reproductive structures that display sporophylls surmounted by two bulges (horns), ans strobiles evoking those of the conifers; the specific name decumbens from the Latin “decumbo” = to lie down, refers to the prostrate bearing of the stems in the oldest plants. 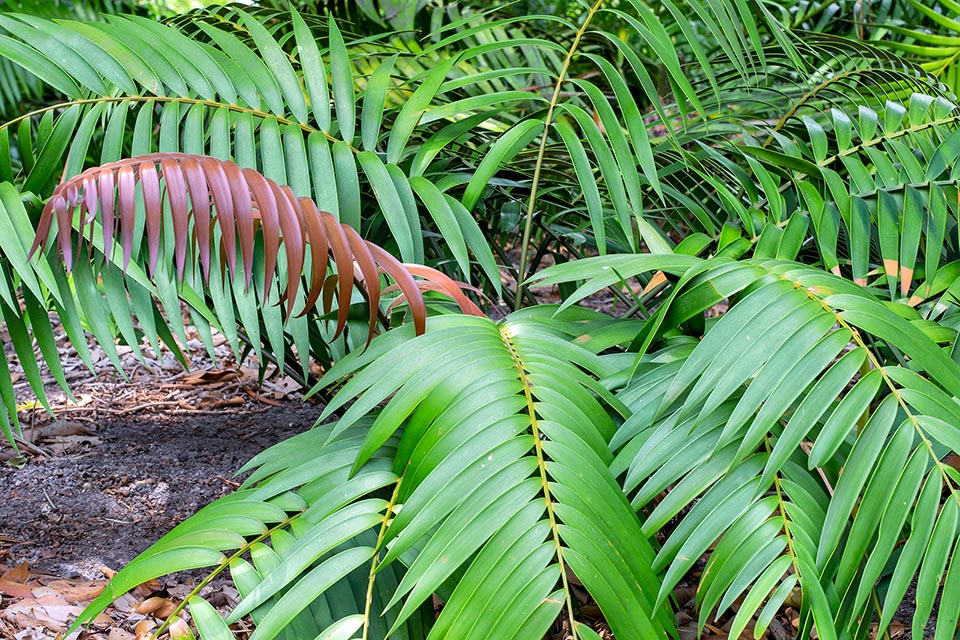 Very decorative for the leaves drooping posture, red in growth, Ceratozamia decumbens is a Mexican species of Veracruz territory. It grows in the tropical subdeciduous forest around 700 m of altitude among karst rocks. Similar to Ceratozamia moretta, it differs for leaflets, the habitat and the colour of the megasporophylls © G. Mazza

We are in presence of a rupicolous species, whose appearabcy may vary from globose to cylindrical, with partially underground stem, decumbent, protected by persistent petiolar bases and cataphylls of reddish brown colour, tomentose.

The leaves, 2 to 6, are pinnate, reddish brown when emerging, then turning dark green by the maturity, 70-150 cm long, formed by 14-28 leaflets, coriaceous, lanceolate, without central vein, inserted on a central rachis slightly arcuate; the rachis is unarmed or has few spines, spaced and short, pubescent when emerging, glabrous when mature; petiole with swollen and tomentose base. Coriaceous leaflets, flat, united united in 7-19 couples, lanceolate, sub’falcate, symmetric or asymmetric with acuminate apex, wider and more asymmetric in the yoiung plants, at times with a cleft by the apex. 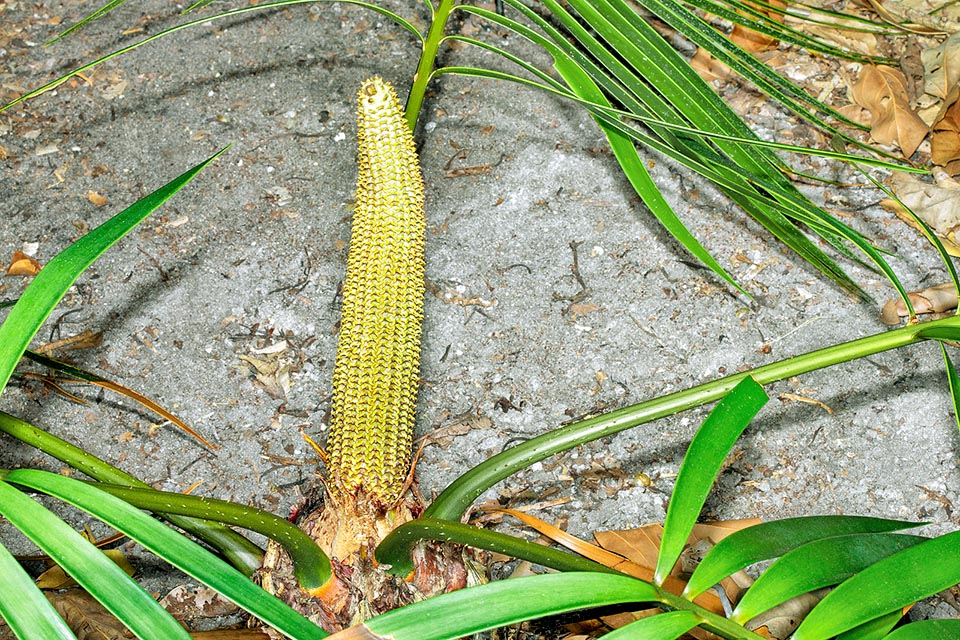 The partly underground stems, at times procumbent. The male cones, 2,3-7 cm broad, reach 19 cm, whilst the female ones, more than twice as broad, do not pass the 11 cm © Giuseppe Mazza

Cylindrical male cones, erect, 12-19 cm long, with a diameter of 2,3-3 cm, green at emergency, then assuming a dark green to brown hue when mature. Cuneiform microsporophylls, spirally arranged and perpendicular in respect to the orthostic axis of the cone, tomentose, dark brown, bicornate; straight and diverging horns. 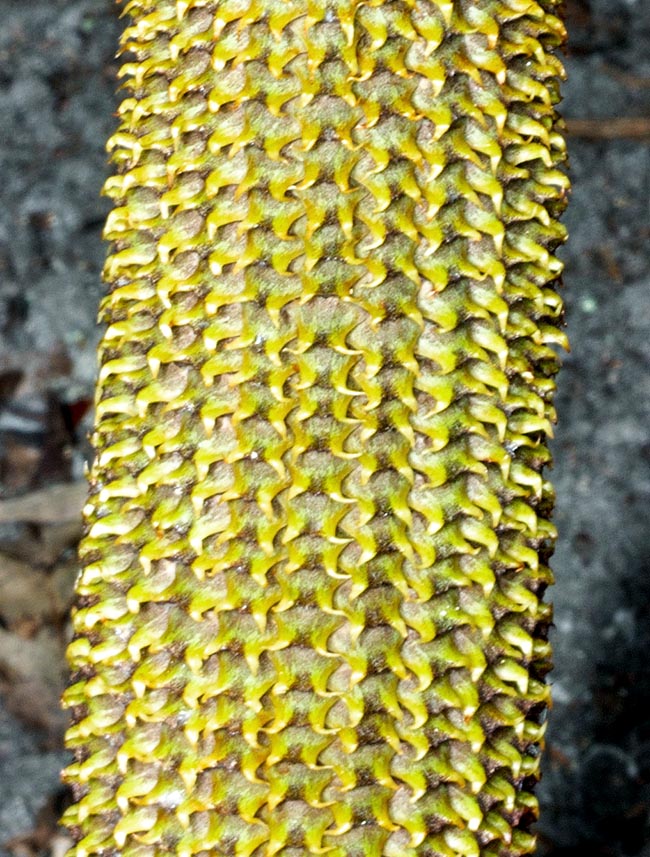 Magnified male cone with cuneiform microsporophylls. The typical horns before are straight, then divergent © Giuseppe Mazza

The recognition to the rank of species of Ceratozamia decumbens is fairly recent (2008) and gets confirmation in phylogenetic studies that have considered the new species distinct, but near to the other species growing in the rainforests of the neovolcanic mountain range of Mexico, such as Ceratozamia morettii and Ceratozamia mexicana.

The presence of plants of Ceratozamia decumbens at the base of the Mexican neovolcanic mountain has a particular interest because the species is next to the taxa Ceratozamia morettii that we find north of the relief.

The phenomenon demonstrates that the new speciation is the result of biogeographical events correlated to the pleistogenic glaciations.

Ceratozamia decumbens has affinity with Ceratozamia morettii, but differs in the shape of the leaflets and the colour of the megasporophylls.

Ceratozamia decumbens  has usually four to six leaves per crown and is found in the subdeciduous tropical forest, on karst soils.

Ceratozamia morettii has a crown of up to 10 leaves and grows on volcanic soils, in habitats of misty pluvial forests. During the last years, the removal of the grassy herbaceous layer and of the underwood to create room for the expansion of the coffee plantations, have seriously depleted the habitat of the species.

Specific information about the place where Ceratozamia decumbens  grows are unavailable. The reserve wants to avert the unlawful collection of this species in danger of extinction and inserted in the Appendix I of the Convention on International Trade of Endangered species (CITES).