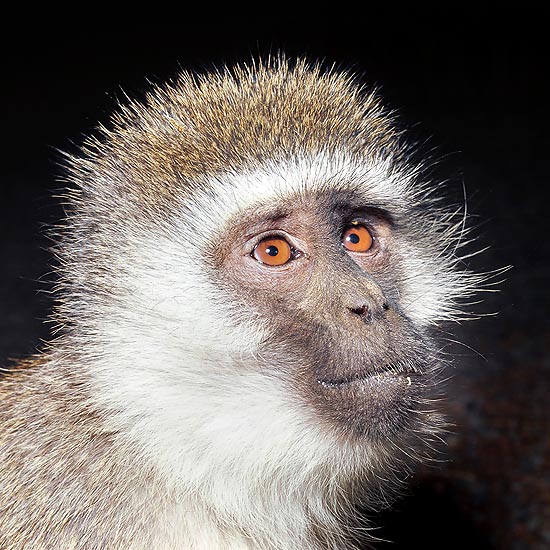 The Cercopithecus aethiops is mild-tempered, but with possible tantrums © Giuseppe Mazza

They are a complex group of monkeys which include several species, with a very elegant shape, afferent to the order Cercopithecus.

In this group, the taxonomy is in continuous revolution, whereby many species have changed name, or keep the old denomination even if they have acquired another one. This group consists of several colonies, autochthonous of Africa, where they have colonized various biotopes, as they may carry on an arboreal life as well as a terrestrial one.

The biologists, to date, recognize in the African continent about fifteen species subdivided in about a hundred of races. In the specific of this text, we shall treat the Grivet, called also, by others, Blue monkey (Cercopithecus aethiops). As we have already briefly said, which is the most known of the genus Cercopithecus, is by various zoological biologists still called Cercopithecus aethiops, but the continuous rehashing of this group calls it also Chlorocebus aethiops.

They are present in almost all the African regions, but in the Mediterranean belt and the desert zones. They abound everywhere, in the sub-Saharan Africa, even if the greatest density is found in Eritrea, Sudan, Ethiopia and Uganda. In Uganda, in particular, these monkeys are absent only in two national parks: the Murchison Falls and the Mburo Lake, but are, on the contrary, present in all other parks and in every forest. 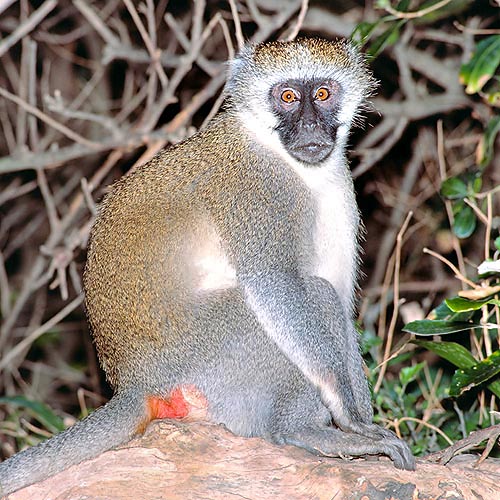 The grivet is an arboreal species but distinguishes from almost other species of the genus because, instead of living in the forests and in the bush, it love the savannah life.

The green cercopithecus has a uniform greenish-yellow colouring of the coat which camouflages it well in the savannah, but the lower parts which are white; in the males, the scrotum is blue and the penis bright red. The general anatomical lines, for the genus Cercopithecus, and therefore also for the Cercopithecus aethiops, show a slim and slender body structure. On the face, furthermore, they present some internal cheek pouches, where they accumulate food as reserve.

The males weigh 4-5 kg, the females 2,5-3 kg. They reach a length of about 80 cm, 60 of which belong to the long tail. The name cercopithecus means, in fact, and not by chance, “monkey with the tail”. This animal and the members of the other species, as already said, have a harmonious structure of the body, a roundish head with a little prominent muzzle. They have four robust limbs which they utilize at the same time for climbing quickly the trees. They lack, however, of a brachiated limb, like the gibbons and the spider monkeys. 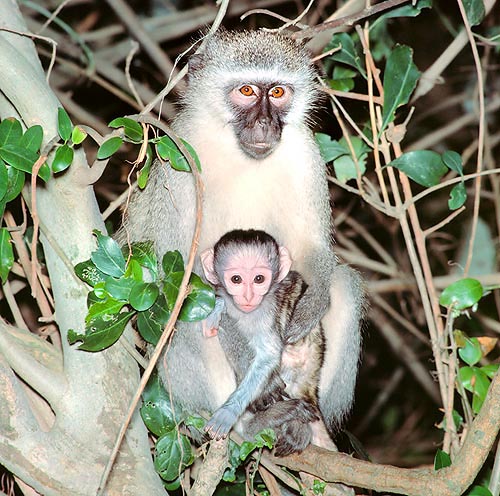 They are very agile animals also on the ground, where they may run, moving also in the thick brushwood, the thicket and the bush. In soma cases, for instance while fleeing from a leopard, a baboon or a chimpanzee, they also improvise discreet swimmers.

They are long-living animals, as they may live up to 20 years in the wild and maybe even 30 when captive.

They may live in groups from 4 to 12 individuals, where there is a dominant leader.

The green cercopithecus has a rather calm temper, even if it is unpredictable, as all members of the genus, with sudden tantrums. When in captivity, they are quite meek, but difficult to tame.

They do not have a particular period of the year for reproducing and the babies may come to life at any time. Essentially, it is sufficient that a male meets a receptive female and that the mating takes place. The gestation lasts, as an average, 5 months and only one offspring is delivered. The same mother’s cares are much marked, and last till the second year of life of the baby. The sexual maturity for both sexes is reached by around the second-third year of postnatal life. The IUCN classifies them at a minimum risk of extinction.