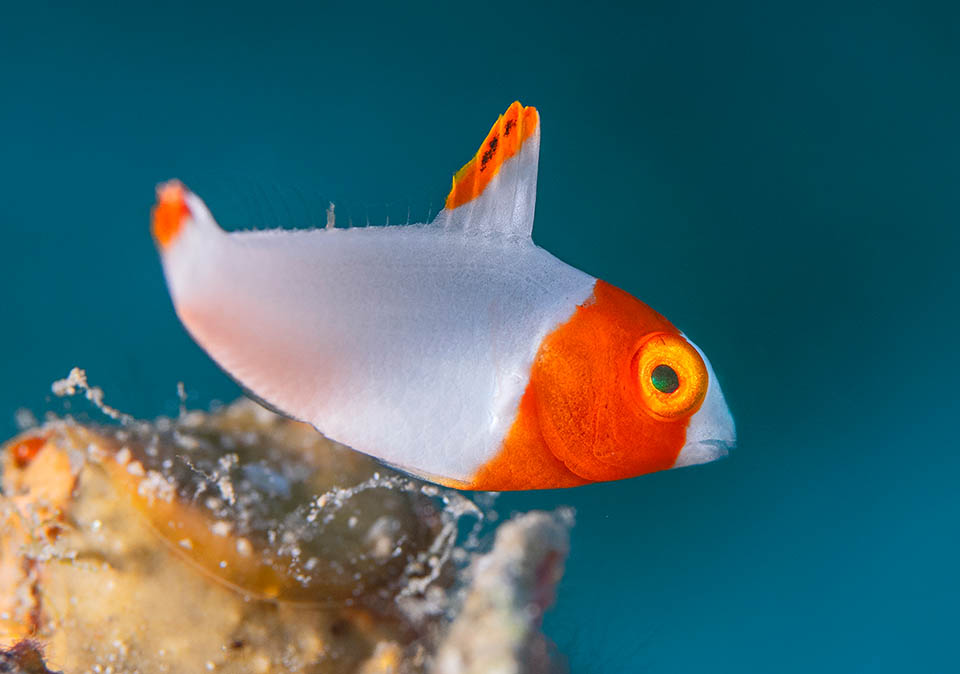 To defend from predators, with 11 mm of size, the kids of Cetoscarus ocellatus look like and swim swaying with the Amphiprion, the clownfishes, movements © Rafi Amar

Cetoscarus ocellatus (Valenciennes, 1840) belongs to the class of the Actinopterygii, the ray-finned fishes, to the order of the Perciformes and to the family of the Scaridae that counts about ten genera and around one hundred species.

Because of the lively colours and the beak, it belongs to the parrotfishes, but the rostrum is hidden by the gums and is not smooth. It still presents a certain granularity, trace like in Bolbometopon muricatum of old teeth, and like in Calotomus carolinus the edge of the two plates is serrated interlocking to better severing, besides scraping off the encrusted, even the most consistent algae and the phanerogams of the seagrass meadows. 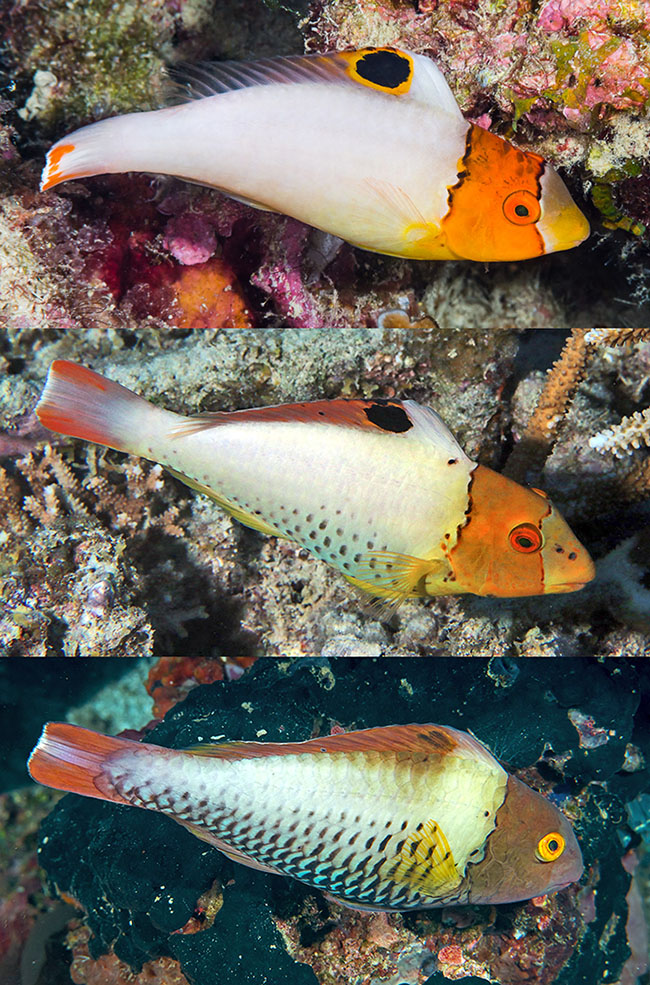 Growth sequence. In the first two photos we see well the ocellus that has given name to the species © Francois Libert – © Paddy Ryan – © Rickard Zerpe

The name of the genus Cetoscarus originates from “κῆτος” (kētŏs), Latinized “cetus”, whale, maybe for the profile of the head with that big mouth, and “σκάρος” (skáros), in Latin”scarus”, is the name of an edible parrotfish of the Mediterranean, nowadays scientifically known as Sparisoma cretense of which Aristotle already spoke, considering it a “ruminant fish”, due to its stubborn habit of chewing and re-chewing the food with its pharyngeal teeth.

The specific adjective ocellatus, with a small eye in Latin, does not concern once in a while the look of the adult fish but the luminous and multicoloured juvenile form, with a showy black ocellus surrounded by yellow orange on the first rays of the dorsal fin.

This is the way to get attention of the predators to a non-vital part, whilst the real eye is well hidden by an orange band with dark small dots that remind the pupil.

Mistaken until a few years ago with the analogous Cetoscarus bicolor of the Red Sea, that practically distinguishes only for the white throat, Cetoscarus ocellatus is a tropical Indo-Pacific species.

Indicatively, we find it along the African coast, in Somalia, Kenya, Tanzania and Mozambique up to South Africa.

It is present in Madagascar and in the islands of Réunion, Mauritius, Seychelles, Chagos, Maldives and Andaman.

Then, after Malaysia and Singapore, it goes swimming along the coasts of Indonesia, Papua New Guinea, Australia, Solomon Islands, Vanuatu and New Caledonia.

Northwards has colonized the Philippines, Vietnam, Taiwan and the south of Japan. Eastwards, we find it in Guam and is frequent in Micronesia, the Marshall Islands, Kiribati, Fiji, Samoa, Niue, Tonga, Cook, Tahiti, French Polynesia and Tuamotu.

Some, based on recent molecular studies, assert however that the Indian Ocean populations should be placed in another species, the Cetoscarus nigropinnis.

Though reported around the 40 m of depth, Cetoscarus ocellatus is a benthopelagic diurnal fish swimming usually in shallow waters rarely going below 30 m. 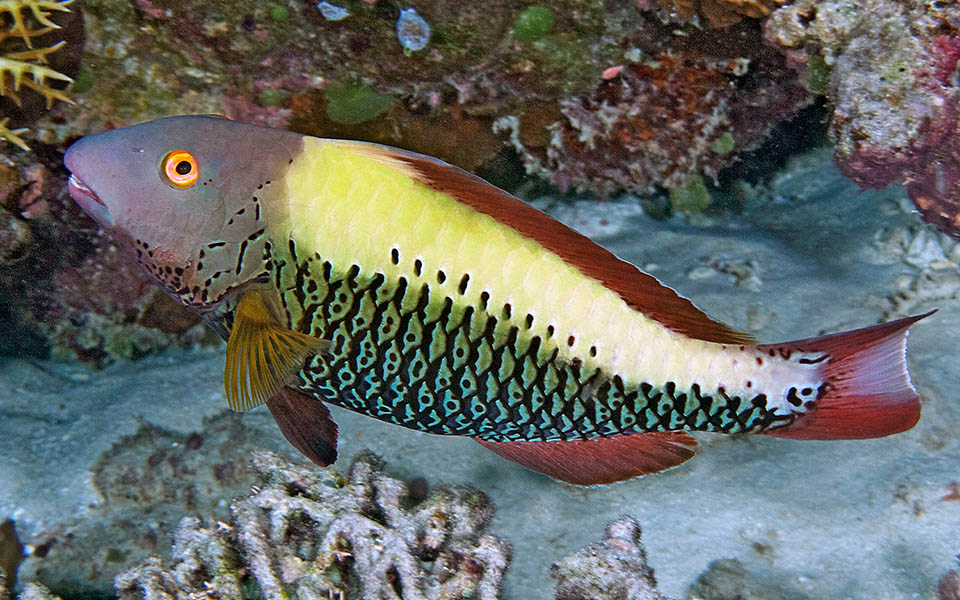 This is the “intermediate phase” preceding the female sexual maturity reached around 30 cm, but some, with still this livery, reproduce already when 18 cm © Keoki Stender

It can be found in madreporic environments but even close to the submerged prairies, rocks covered by algae and mangrove swamps.

The young grow up isolated hidden among the corals, whilst the adult males often boast a small harem with which they go out to pasture.

They graze algae and phanerogams, without neglecting the mollusks and the crustaceans that have the bad luck of being among the foliage, and the live polyps of the madrepores with their microscopic symbiont algae that they swallow together with the coral substrate as happens when they scratch the algae encrusting the dead ones. The whole, as used among the parrotfishes, is ground by the solid pharyngeal teeth and transformed in sand, after a long intestinal journey. 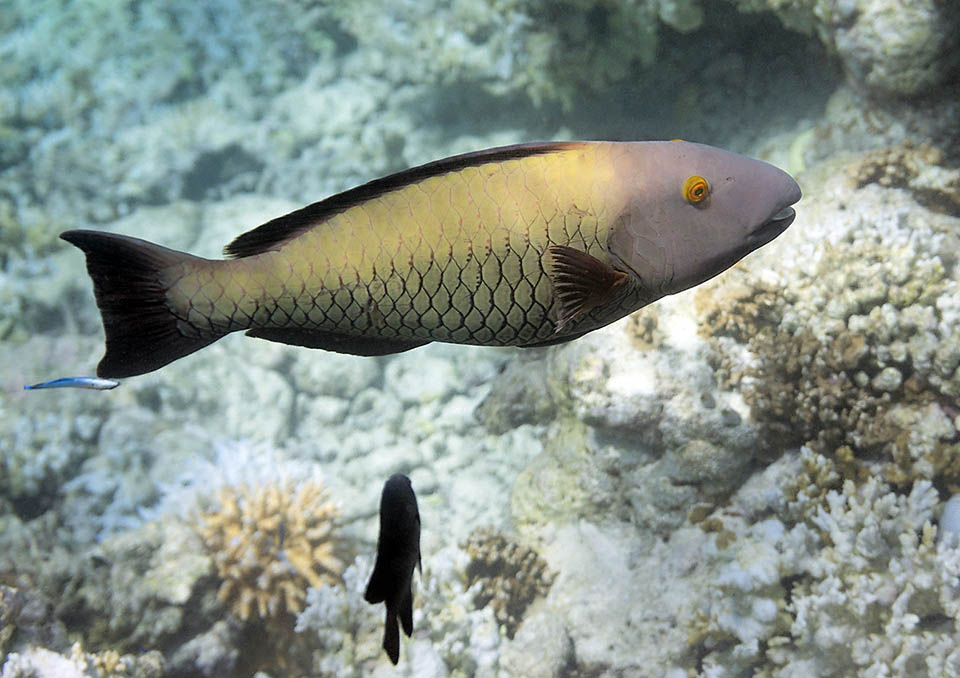 Adult female typical livery. The head tends to purplish and the body to brown or dark greenish grey with small dots on the black-edged scales forming a reticulum on the sides, little evident in the upper zone, clear, under the dorsal fin. The fins are often very dark and the caudal is tendentially lunate © Nikolai Vladimirov

It has been calculated that a big specimen may produce even two tons per year of it, precious for the ecosystem and the tourism, seen that later they form the candid tropical beaches. 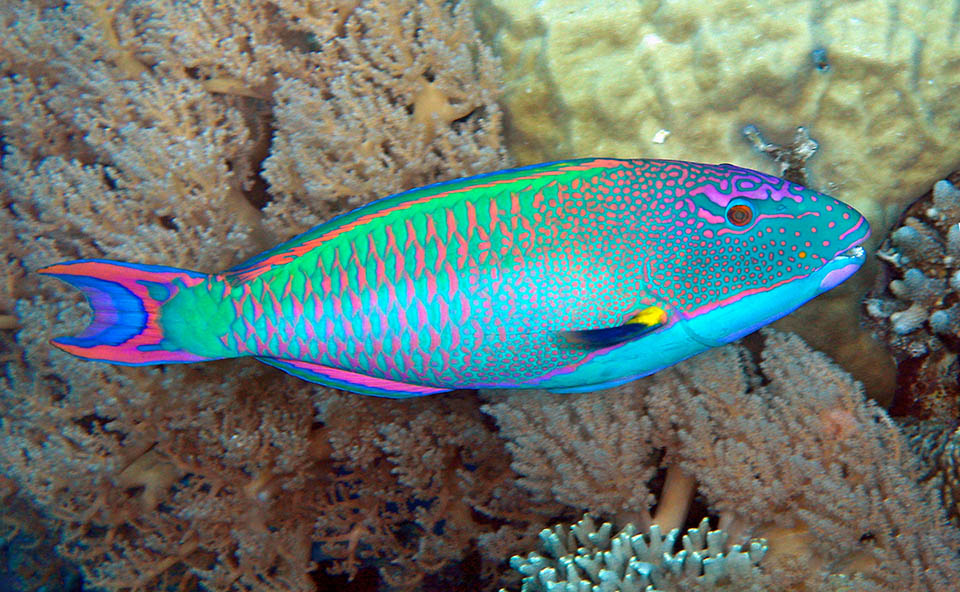 Starting from 45 cm in size, some females may transform into males with a drastic change of livery. The luckiest ones reach the 90 cm and 25 years of age © Keoki Stender

The males, that even reach 25 years of age and 90 cm of length, even if mostly slightly exceeding half a meter, are however always bigger than the females who are their next stage.

Cetoscarus ocellatus in fact is a protogynous hermaphrodite species with females, already sexually mature when 18 cm long, that, growing, transform in males, changing livery, when around the 45 cm of length. 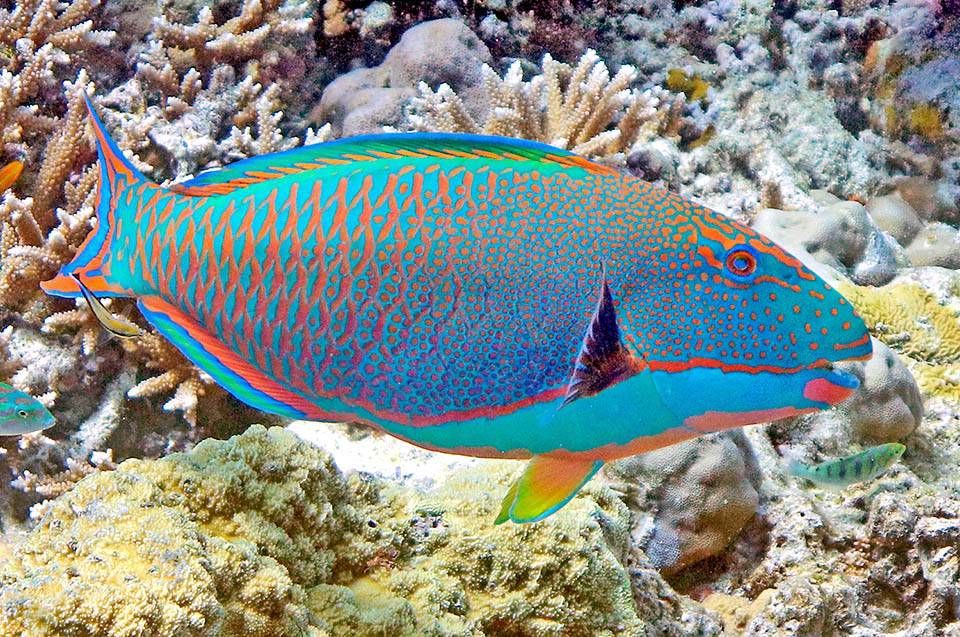 On the background livery with splendid green, blue and turquoise shades, stand out the pink orange edged scales, repeated by dottings and drawings of similar colour © Keoki Stender

In this phase they move with the typical undulations of the young clown fishes that live in symbiosis with stinging anemones, perhaps to deceive the predators who in the past have had bad experience with these, banging the snout whilst the young Amphiprion took refuge among the tentacles of their host.

When about 3-4 cm of size the red belt takes on orange tones with a small black border; the white snout tends to sepia yellow, and, above all, gets longer the dorsal fin with the black ocellus typical to the species. 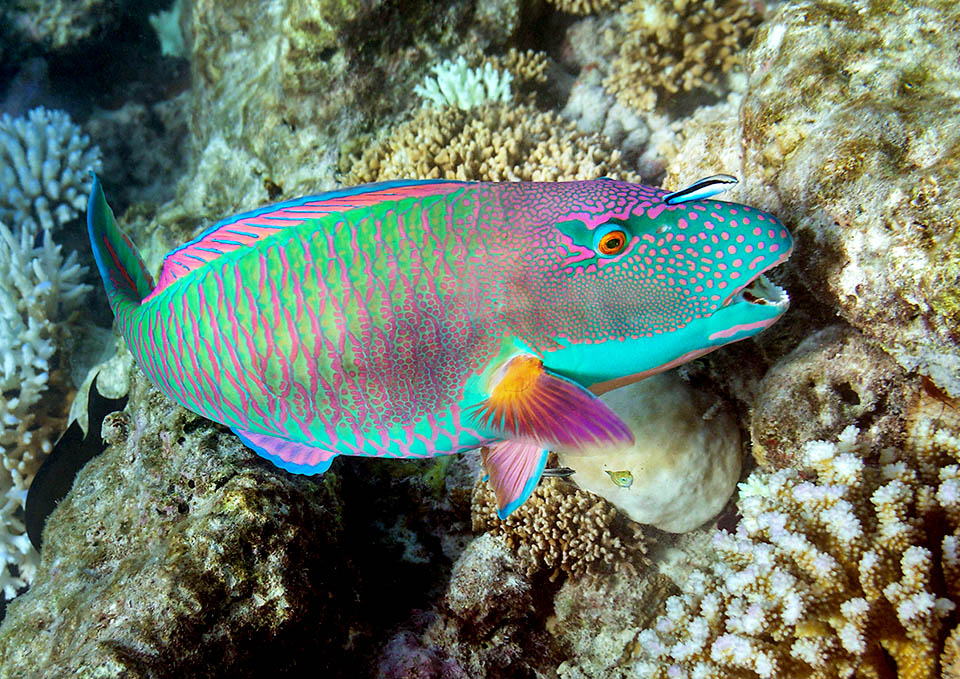 Cetoscarus ocellatus eats phanerogams and algae, including ill-fated crustaceans and mollusks found in the foliage and polyps of madrepores it gulps with the substratum like for the encrusting algae. All is then ground for long by its strong pharyngeal teeth and transformed in candid sand after a long intestinal voyage © Nikolai Vladimirov

The orange belt tends to brown progressively blurring with the colour of the snout, and on the belly the scales sketch a black dotting.

In this way, by the 15-18 cm, we reach the so-called “intermediate stage” that precedes the typical female livery with the total disappearance of the brown band of the head that conforms darkening whilst ventrally and on the sides with often greenish blue scales with traits and black dottings in stark contrast with the dorsal side. The caudal has a small white border.

In the following phase the females reach their sexual maturity. 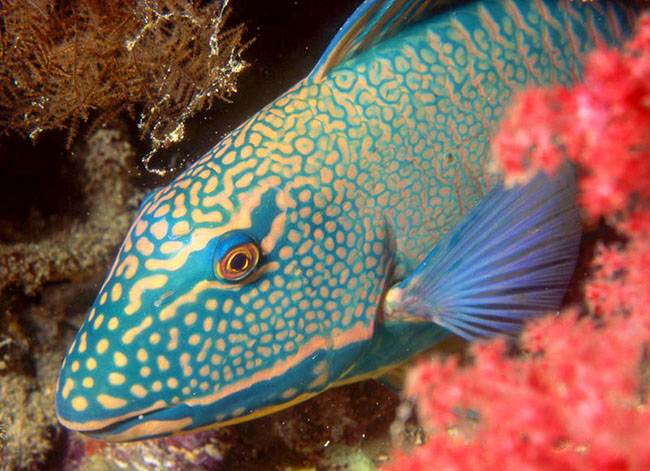 Dramatic male night livery. The pink designs are now yellowish in a two-tone combination. The colours are still decidedly gaudy, but turn out to be mimetic in the multi-coloured world of the corals © Paddy Ryan

The head tends to purplish and the body to brown or greenish grey with spotted and black-edged scales forming a reticulum on the sides, not very evident in the yellowish white zone under the dorsal fin. At times the fins are very dark.

Then are present, like for other scarids, the night liveries with flamboyant pajamas for spending the night peacefully, mimicked in the colourful world of the corals. However, in all the phases, the iris is always bright orange or golden.

As often happens in the world of the parrotfishes, the mating of Cetoscarus ocellatus is preceded by a circle dance towards the surface where the couple, in this case swimming cheek to cheek, entrusts the fecundated eggs to the currents. They wander pelagic, like the larvae, covering even long distances before settling on the bottoms.

Cetoscarus ocellatus cautiously escapes from the sight of divers and is rarely fished for local consumption. The children are at times caught for the aquaria, but this is not a species suitable for the domestic pools and even the great public aquaria meet difficulties in keeping them because they are much more sensitive than other fishes to the parasites that stand in the pools, such as, for instance, Cryptocaryon irritans. 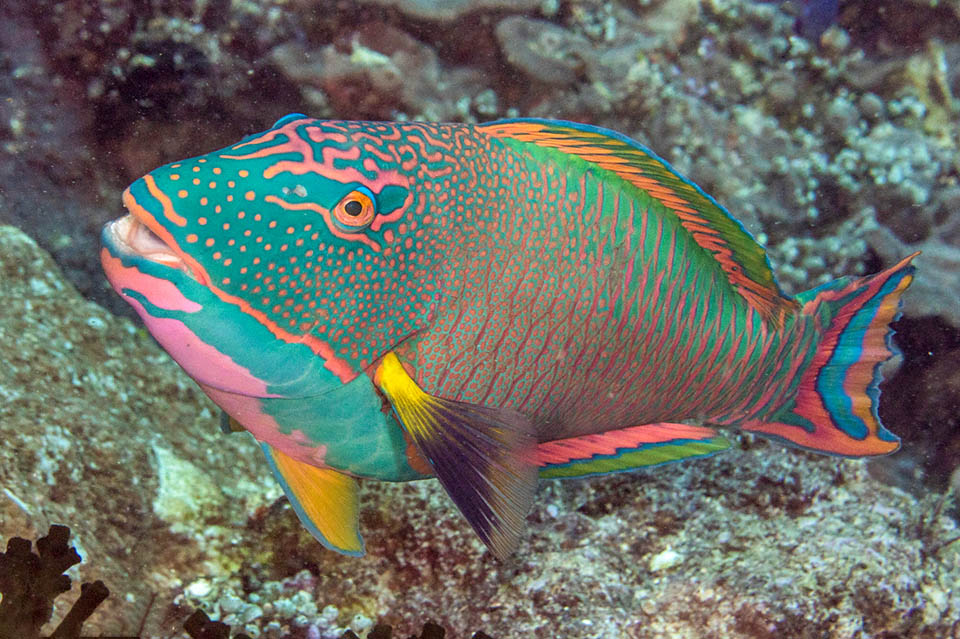 Often the males have a harem. The species future, more vulnerable than others due to the low genetic diversity, is linked to climate changes © Mark Rosenstein

It might be thought, due to the wide food possibilities and its vast diffusion, that Cetoscarus ocellatus is not an endangered species. But recent research has shown that its genetic diversity is the lowest in all parrotfishes. Facing the death of the reef caused by the climate changes, it has therefore less capacity than others in adapting to new habitats. Moreover, the resilience is modest, with a minimum doubling time of the population of 1,4-4,4 years.

Therefore, nowadays, in 2021, the vulnerability index of the species is considered high and marks 59 on a scale of 100.

Cetoscarus ocellatus was last modified: May 3rd, 2022 by Peppino